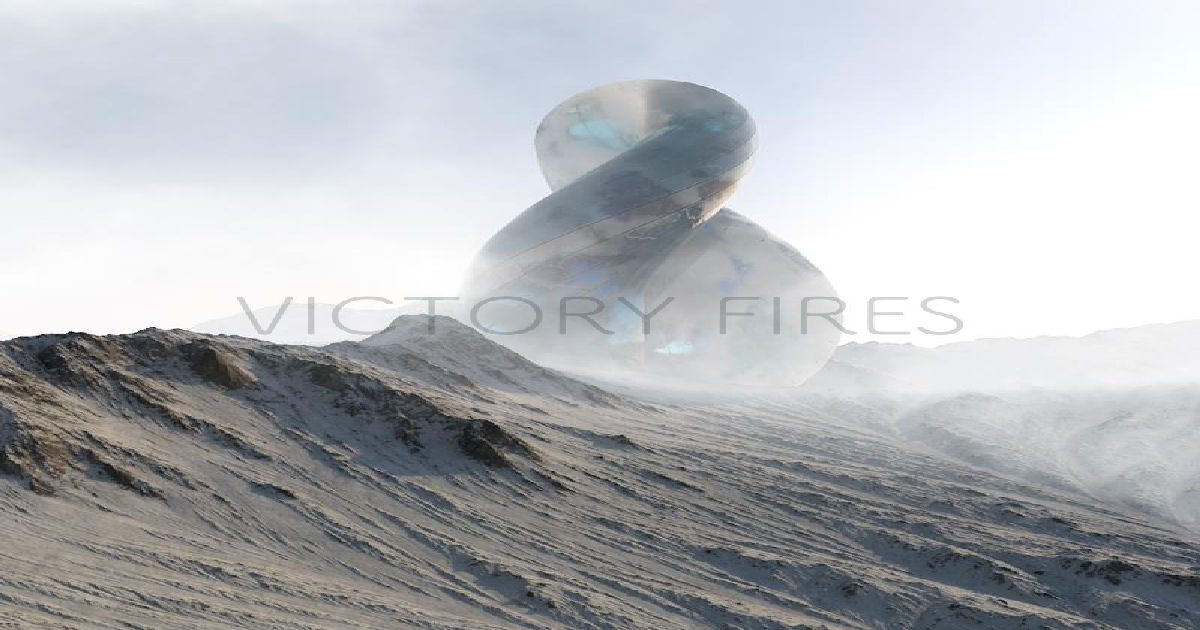 I don’t want to give away the ending here…so…SPOILER ALERT…I accidentally started listening to Victory Fires with my player on shuffle.  I heard the final track “Neon Skyline” before I heard anything else…I’ll talk about that soon enough…but rest assured, it was one hell of an impression and a memorable moment to say the least for now.  I got those familiar chills and knew I was in for something special.

As far as I can tell, this self-titled effort is the debut from this West London three-piece.  If every debut came out this tight and this stunning my job would be a whole lot easier than it normally is, that much I can tell you.  With Victory Fires being so damn ready to go, I figure this entire review will practically write itself – I love these guys!

Mind you, I have to also be upfront…Victory Fires is all about that electro-indie sound & style, which happens to be one of my own personal favorites as far as genres are concerned…so full disclosure, my ears exist solely to discover & absorb sounds like these.  Even the write-up in their biography on their Facebook page caught my attention…maybe for its pinpoint-accuracy.  It reads:

“Three guys from London attempting to make electro rock…. however we sound like a mix between the killers and savage garden… so garden killers.. like slug pellets. we are slug pellets”

Savage Garden!  Jeeeeeeez.  Go with something a bit more like…Owl City…something that like boys – half of me suspects that people would associate Savage Garden with a bit of the ol’ cheese nowadays.  I get where they’re coming from…and obviously a lot of that write-up is in jest; but just so we’re clear here – none of this turned out cheesy to me…I felt like Victory Fires got the sincerity across perfectly.

Some of these tunes I’d dare say come out sounding freakin’ TIMELESS…as in, I know I’m going to enjoy this record as much as I do now about twenty or forty years into the future as well.  Sixty if I’m real lucky but I’m not banking on that.  Anyhow…point being…Victory Fires has got some truly impressive material here; it’s a relevant sound for today and it’ll hold up strongly tomorrow…that’s what I’m saying.

As for Savage Fartin’ – they should be so lucky if we still feel the same way about’em in another decade or two.  The Killers…maybe…I could make an argument on their behalf I figure…maybe.  Moving on…

“Wherever The Wild” starts the EP out with a bold electro energy and captivating sound that immediately increases the interest for whatever might follow – I was hooked from the moment this record began.  The hooks are there, the execution is there, the production and performance…it’s ALL there.  And this is a debut?  It’s the kind of debut that leaves you shaking your head…Victory Fires are like the player in the minor leagues that could get called up to the majors at any moment, and if there’s a smart set of suits & ties out there with a brain in their head, they’d make a play for this band immediately.  Based on everything I’ve heard from this entire EP as a whole, this band doesn’t just have a chance to be good – they have a chance to seriously be GREAT…this is a full-time career kinda-sound, you feel me?  If the dynamic sound of “Wherever The Wild” doesn’t immediately convince you (which it likely WILL) – “Strong” is just around the corner…and for me, that was the clincher.  I like the pop-inspired energy that they bring out to start the record and the smart layers of synth & piano driving the melody alongside the beat…but to convince my ears, I still wanted to hear a bit more of that connection between the band and the material they’re writing.  I’m not saying they don’t put that on display during “Wherever The Wild” – I’m just saying that it’s a freakin’ GLITZY track that makes it tougher to tell is all.

I think everything I was looking for from Victory Fires came through instantly on “Strong.”  What an APT title boys!  This is damn bulletproof guys…from the moment that the synth punches into the mix just before the thirty-second mark, this track comes out sounding like an enormously beautiful anthem…like setting the pace for the heartbeats of the audience to all beat in-time as they sing along.  The writing is beyond “Strong” – this CONNECTS on every level through the way they’ve performed this tune…the verse is great on its own and has enough hooks that it could have stood firm on its own, but they really managed to morph and transition this track perfectly into its chorus in a seriously insightful way that flows seamlessly.  The sentiment is sweet, the melody is compelling, and the entire song has an extremely uplifting feeling in the atmosphere that you can’t help but notice.  Message and music combine perfectly here…the sincerity comes glistening through, which can be a much tougher sell in this particular genre…but this crew…they’ve got the ‘it’ factor…they’re spot-on.

So it’s in saying that, that I don’t want anyone to get me wrong here when I comment on “You Said.”  Without question, already knowing what I was in-store for with the ending of the EP by having played “Neon Skyline” first, I knew that “You Said” had the toughest spot for a song to exist and stand-out from on this entire EP.  Nestled in between “Strong” and “Neon Skyline” – ANY song would have a tough time making a similar impression and impact…but more or less, on any other album out there, “You Said” would probably be one of the highlights on a record.  It’s only by comparison to the rest on this EP that “You Said” might come in 4th place overall…but it’s still a great song.  Sometimes we can hear something in a band or artist that resonates so powerfully that you know that’s the ‘sound’ – that blissful spot in a recording where you can hear that the moment is flowing naturally, organically, and that strength in the connection between the writing and performance undeniably exists.  Songs like “Strong” and “Neon Skyline,” at least to my ears, tell me that’s the exact sound where this band needs to continue to examine, expand and mine for all it’s worth…because they’ve got something there.  Something that they can potentially refine and truly call their own.  Songs like “Wherever The Wild” and “You Said” are perhaps better for the party-atmospheres out there…I certainly wouldn’t deny them that…but I’d argue that they also do less to set them apart from what else is going on out there in the music scene than the other two songs do…I suppose that’s what I’m saying.  So again…do NOT get me wrong here – I personally dig “You Said” quite a bit; I just happen to think it’s almost too easy for them – is that fair to say about anything related to a debut?  Maybe I’m being too harsh here…what I’m trying to get across is that they do the up-tempo electro-indie vibe in “Wherever The Wild” and “You Said” extremely well – but my instincts tell me that the songs that are going to connect to the people the strongest and last the longest on repeat are their more sincere & emotionally-involved tunes like “Strong” and “Neon Skyline.”  Get it?  Got it?  Good.  I’d still happily rock “You Said” at top volume loud’n’proud…I like it’s gentle electro vibe and how smooth this entire song comes out – that’s a fact.  But time damn near stops around me and the world seems to cease to exist altogether when I’m listening to “Strong” and “Neon Skyline” – that’s also a fact…so consider that to be the differences in the experience I suppose.

Could a SLUG PELLET write a track as extraordinary as “Neon Skyline?”  I highly doubt it.  This is the indie-electro sound done as right as right can be right here is what this is.  I love the mix on this tune and where the vocals sit – it makes even what is truly more subtle electro become absolutely MASSIVE in its sound, allowing the moment to really take you over and set your mind adrift to the music.  It’s a fantastic ending to what’s been an incredible effort the entire distance through, with Victory Fires sounding like a band that is destined for big, big things in this lifetime as far as my ears are concerned.  They remind me a lot of the indie-band A Love Like Pi that I latched onto & loved from a couple years or so back…which tells you how long it can generally be before you can experience another band in this particular genre that understands the sound well enough to make that substantial connection.  “Neon Skyline” is damn near a masterpiece and a soaring, brilliant & imaginative final song to end the EP, which has been equally stunning and consistently high-quality from writing to performance to production the entire way through.  I can’t lie and say they’re reinventing the wheel here…you can tell from their own words above that even they know they’re not…yet.  Right now, I think Victory Fires is just getting lit…and I think we can expect to see a bonfire blaze of enthusiasm & support surrounding this project if they continue on in this direction.  They’ve certainly got my support – consider me a huge fan of this record.