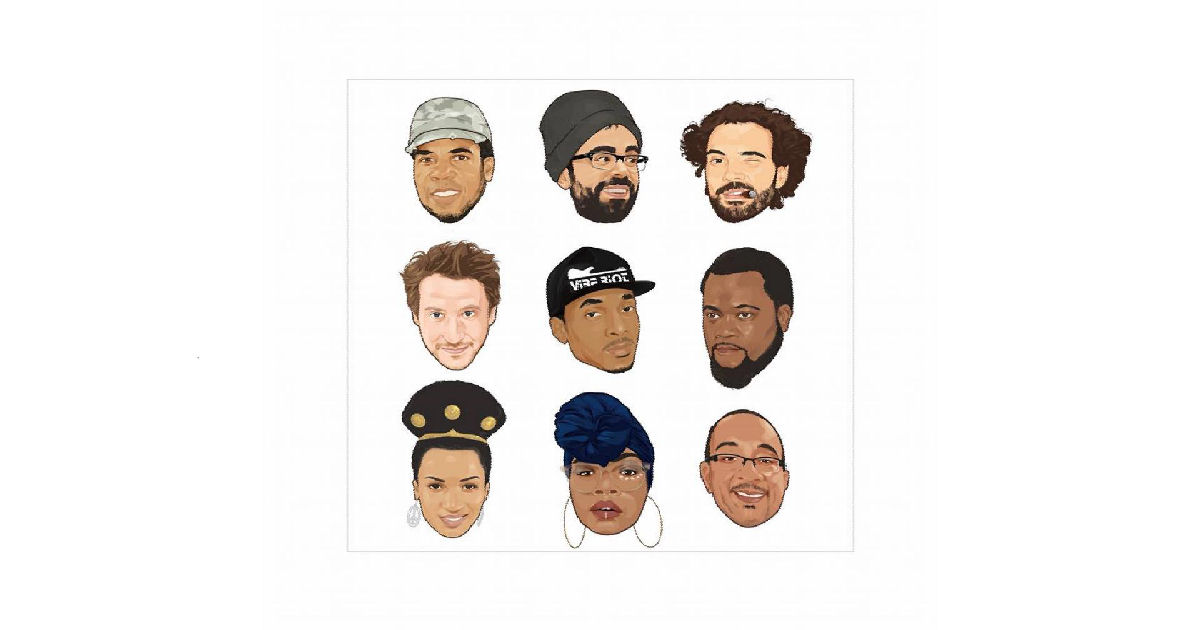 Got a sample from the new Vibe Riot record with four singles in review for ya – and right from the drop of “Raw Honey” featuring the talented vocals from Xe Jah’Twi dazzling the mic on the main hooks – this first cut immediately catches the attention for its loose groove and tight execution.  That bass!  “Raw Honey” has exceptional rhythm and a genuinely organic feel to the way it flows and expands.  It’s subtle drums, bass, guitar…maybe a lil’ something else in the mix there too like keys or piano…but all brilliantly understated…almost like the music isn’t playing with an audience in mind or some gimmick to pull you in…much more like you walked into the room and Vibe Riot was fully chillin’ with “Raw Honey” just springing up as they jam.  And then we’re here somehow…all of a sudden right in the middle of one of the catchiest natural sounds you’ll likely hear this year in Hip-Hop.  Jaewar, who we were introduced to in the middle of last year in a review we put out, confidently handles the mic, flexing much skill and versatility – feeling that groove every bit as much as Xe does, but with a completely separate energy, approach, and sound that ends up giving “Raw Honey” multiple access-points for a listener to get into it from the R&B hooks of the chorus to the stylistic rap working magic in throughout the verses.  The verdict comes in quickly in support of this single…I gotta say, for as remarkably chill as “Raw Honey” ultimately is – I’m actually amazed that such a mid-tempo cut can make this much of an impact.  Like I don’t really care who you are, “Raw Honey” is the kind of track that ain’t no one out there about to turn off or turn down…complements to the chefs – this first single has an insane amount of crossover appeal.  Because of how chill it really is, one of the best things about “Raw Honey” is that, after you listen to it a couple times, you realize just how much this song sneaks up on ya and the impact it really makes…the more you spin this cut from Vibe Riot, the more you NEED it in your life – it goes far beyond simply wanting it.  Seriously impressed with “Raw Honey” – tons of personality on display, killer vocals from Jaewar & Xe in each of their parts, and the music…the MUSIC…I tell ya…what a vibe…what a vibe!

So I suppose one thing is certain after hearing this first impression of the Vibe Riot record – “Raw Honey” proves that’s one hell of an appropriate name for this talented crew & collaborative effort.

Heading back to about a year ago, “B.O.Y. (Because Of You)” features the sultry sounds of Nina Mallia on the mic.  What becomes clear right away, is that there is definitely a lot of talent within the extended family of the Vibe Riot crew, and that versatility like this will lead to a highly rewarding experience for all members involved.  I love this kind of project where there are multiple players & personalities – because once they’re all dialed-in to the concept and sound they’re going for, like Vibe Riot is, you get the best person for the job every single time.  Essentially, what I’m saying is, “B.O.Y. (Because Of You)” benefits greatly from the unique & bold approach that Nina has…she’s what this atmosphere in the music needed to make it all pop & stand out – and as a result of the right selection & supply of talent within the Vibe Riot crew, again, he we are, listening to all the right moves being made.  Respect to the entire lineup of players in Vibe Riot, because whether or not they’re in the spotlight or closer to the sidelines on any given track, it’s clear that they’re looking to create the best music they can possibly make as one unified entity…in an environment like this, with no ego or jealousy getting in the way, artists can truly flourish and get some of the best results out of themselves that it’ll even surprise them personally.  Listening to “B.O.Y. (Because Of You)” gives you a real appreciation for the level of quality and standard Vibe Riot is setting across the board, no matter what the song itself sounds like genre or style-wise.  Bonus points to the awesome keyboard solo in the middle of this jazzy cut – they sound absolutely awesome.  Again, it’s impressive how much life there is in the Vibe Riot style while moving at such a dedicated mid-tempo…I honestly believe that’s the hardest pace to establish a lasting impact, and I think that Vibe Riot is notably THRIVING with vibrant sounds & songs that are strong enough to break those constraints to impress us thoroughly, no matter how quickly or slowly the music moves along.

“Amazing” features Xe Jah’Twi leading the way once more, this time in a more reggae-influenced style.  Undeniably, that makes things tougher for me to examine…I’m pretty much guaranteed to resist reggae for some bizarre reason…just a style of music that has had a seriously tough time connecting with me.  Y’all know me though, I can be objective when it needs to be done, and I wouldn’t deny that “Amazing” is another tight creation from the Vibe Riot crew that they play just as well as the others.  For myself, I got right into the bass-lines that run throughout this third sample of the Vibe Riot record – I think it’s 100% rad to listen to and adds a ton into the mix, energy, and movement of the music on “Amazing.”  Xe does another great job on this song…I think she holds her own throughout the verses and absolutely blossoms into something even more throughout the expressive way she sings the chorus.  There could potentially be an argument to be made here that “Amazing” doesn’t quite have that balance between the song’s two main elements of verse/chorus like the others did beforehand…but…if anything, I think this cut comes out sounding like that because the chorus of “Amazing” is a real highlight moment in itself from the Vibe Riot catalog.  The transition into it and the resulting sound, is sweet, charming, and completely beautiful to listen to – Xe does a fantastic job of bringing the entire track to that next level with the brilliant way she smoothly sings the chorus hooks.

I’ll tell ya what’s straight up MADNESS though…what’s absolutely crazy…what was like, honestly mind-blowing to me…because SOMEONE over there in the Vibe Riot crew must have also noticed just how much of an impact and impression those final fifteen seconds or so become with just that added hint of guitar overtop of the final chorus.  Like – you KIDDING ME?  How on earth that didn’t get used earlier-on, or at the very least, more often…is…well it’s nuts quite frankly…there’s a gold-mine’s worth of captivating sound added in with this clever layer that brings us in even further.   I wanted much more of that, without question, and I think they might need to revisit this cut just to find a way to put that in there more somehow…or give it even more space at the end to drift into a different part of the song altogether maybe…I dunno – they’re the experts, I’m just the consumer asking them to supply my demands!  LOL.  I’ll take what I can get…but if I’m being honest, they really might want to examine the strengths & benefits of adding such a strong detail in earlier on in “Amazing” – might be something there that could help this cut stand out just that much more.

Lyrically, the final cut I was checking out called “Peace Of Mind” was probably my favorite of the bunch…lots of great insightful social commentary on this track.  Essie Quoi sings the main verses with an angelic grace, Jaewar takes over to transition the energy of this song from one end of the spectrum to the other as they crank the tempo & intensity up while he spits hot bars.  Dig the opening solo on the sax from David Sobel…didn’t mind the light reggae vibe of this cut but generally felt much the same as I do with the generic rhythm & pulse that defines the genre leading the way.  Some excellent ideas in the drums, the music is all played well once again – I think “Peace Of Mind” is most notable for that main switch from the serene sounds that Essie establishes, to the up-tempo energy that Jaewar provides.  Feels like the whole track springs to life right around that point, making the drift back into Essie’s part afterwards to take the song to the end have that much more of a welcoming impact.  From what I can see, this particular cut dates back a couple years…”Amazing” was the newest posting as well, so it’s safe to say that the reggae influence is still a strong part of the Vibe Riot sound to this day.  They’ve clearly been working hard at creating the songs for this debut release – and the results come through shining with vibrant imagination and colorful music that is unique from track to track, but still feels like they’ve got their own thing goin’ on.  The Vibe Riot album was officially released on 4/20 of this year – so it’s out there…and if the quality of these four cuts are any indication, you should probably do the right thing & treat yo’self by heading on over to their pages to go get that.  Solid stuff from Vibe Riot all-around.

Find out more from the official Vibe Riot website:  https://www.viberiot.com/

And then there’s this link that takes you to stuff too!  https://distrokid.com/hyperfollow/viberiot/dcKH