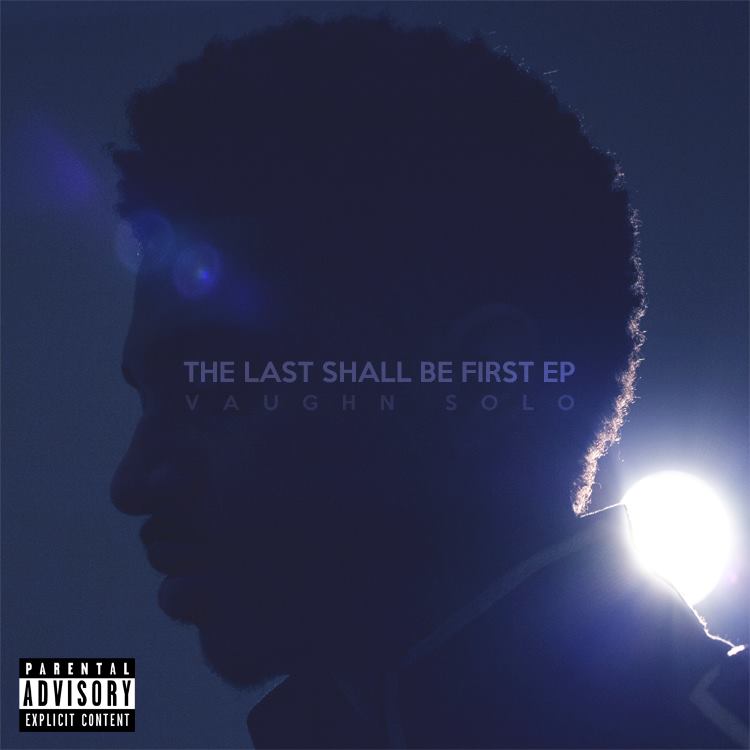 Vaughn Solo – The Last Shall Be First – EP Review

Good to have this guy back this early into 2016 – that, to me, at least means we stand a solid chance of getting even MORE music from Vaughn Solo, aka Boonie Mayfield, aka Solomon Vaughn, by the end of the year. How do you like THAT eh? I just get myself a brand-new EP from the guy and before I’ve even discussed a single song, here I am demanding more! What can I say…I get excited when I see any one of this guy’s projects pop into the inbox and load onto the playlists – you can always expect a high dose of quality in the writing, atmospheric music to supply the rhythms to rhyme to and a professional approach that always lets you know just how serious it gets over there in the studio when it’s time to put the game-face on, hit the red light & start to record.

As The Last Shall Be First begins, it opens with vocal-samples, guitars, piano and a solid beat with “Endtro (Elfman Begins).” I have a Batman tattoo on my left-shoulder…had it since I was old enough to get one; the original Batman movie with Michael Keaton was also the first movie that wasn’t a cartoon that I remember seeing in theatres, way back in the day. So…to sum all this information and the first track up real quick…no way in hell that a Batman-clip from that first movie is ever sneaking past me! Smartly mixing in some classic speech from Jack Nicholson’s version of the Joker…our next adventure with Vaughn Solo begins…

“Noo*Breed (The Last)” is the musical equivalent of the Energizer Bunny, but so too is our main host & emcee Vaughn Solo – this guy never quits when it comes to a rhyme. He roams from thought to thought without any effort, seamlessly gliding between lyrics & lines that deal with politics and the idea of celebrity, pop-culture references and a whole lotta personal-shit to get off his chest. Swinging confidently, he lands lyrical punch-after-punch to the endless stream of lyricism that sounds like it would be free-styled in regards to how many different places he takes the subject of the song. On one hand you could argue that tendency to roam might come off sounding a little less focused…but on the other-hand, much of Vaughn’s work has had that autobiographical-nature to it in his past work; I think to expect anything other than a wide variety of sounds, themes, topics and approaches would just be weird. Dude’s an innovator and certainly a proven one – we’ve reviewed three of his past records over the past couple years and he’s always delivered; that being said, if “Noo*Breed (The Last)” were to go any longer…I’d be looking for a little more variation in the music to go along with that amount of variation in the rhymes! As it stands, in an under three-minute song, it works and serves as a solid moment in time that will definitely go on to always remind Vaughn what was on his mind at the time of this exact recording.

Amp’ing-up the performance and entertainment to a higher-level on “Take Up” – Solomon gets in some solid lyrics through the quickness & confidence of the opening verse before handing off the mic to featured-rapper Façade to handle the rest as they take half this track each. Smartly transitioning through the clever sample that Vaughn’s laced into the middle; this is a signature-move from this intelligent rapper. Designed to make you think – he’s got a real gift for finding the right samples to fit the themes in his music. Façade delivers on-point, with precision and a confident-stroll through his verse; make no mistake…dude might sound all chill & smooth but he can flip the switch and get there in half the time Nicolas Cage can – look it up!

“King Sh*t” puts the raunch right back into the writing. Driven by a subdued, jazzy-beat and some rad bending synth-sounds…there’s a lot about this track that not only takes Vaughn to an extremely personal place – he’s here in this track with a straight-up vengeance. With confidence building bar-for-bar, Vaughn Solo rhymes at a speed no bouncing-ball would be able to keep up with onscreen…it’d just be one blur of colour streaming by on your screen and every once in a while you might be lucky enough to recognize a letter or beginnings of a word. Such a steady stream of verbal-flow…and the dude never misses the metering…he’s always 100% right on the beat where he should be and delivering with full power & conviction that can only come from really believing in the words he writes. “King Sh*t” represents some of the best in the aggressive-side to Vaughn’s work; the lyrics are pointed, direct and someone out there, maybe several-someones might just feel the sting of this one a bit!

Keeping it in that jazz-like vein musically but adding a little more beat & rhythm to “Train Of Thot” – Vaughn confidently jumps into the opening verse, once again with a freestyle, free-flowing-thought feel to the lyrics. I mean…I never really did find out the answer…but I’d assume these are written, structured, rehearsed and performed in a professional-progression and evolution to the recording…as much as they sound off the top of his dome…I dunno…I think he’s got these mapped out towards success and really taking the time to do it all RIGHT. Wasn’t so sure about the train-sounds in “Train Of Thot,” but I get it; and besides, they’re quickly forgotten once the brightened-tone & energy of Dijon SAMO lends a hand to the song’s second-verse. SAMO rolls through this set of bars…struts really…this is a victory lap and one well set-up through the solid performance from Vaughn opening “Train Of Thot” – by the time SAMO climbs aboard, this train was already rolling high-speed and it’s up to him to simply guide it to the station and not let it derail. Instead…SAMO doesn’t let the success of the song’s engineer drive it completely – he downright grabs the controls and launches this thing on a pimp-smooth & pillowy-soft ride to the end.

Oh shit! Here we go…this is some next-level quandary-type-shit right here… How am I supposed to actually review “So Much More” when it’s all about the psychology behind listening to music, taking it in…and also spends a few bars or more on the topic of critiquing it! NO PRESSURE JER…hold it together! It mentions how any comments I might make in efforts to describe what he does would be more of a reflection on my own thoughts and circumstances rather than a description of what I’m actually hearing in the music. *Gulp!

Thankfully…I still feel like I’m on Vaughn’s side…I feel like even though I tend to ‘write’ more than ‘do’ things of some other nature…writing in itself IS my doing…and much like Vaughn, words are my art of choice. Reflecting on many personal thoughts and how it all applies to life and a career in music – “So Much More” sums-up the frustration that many of us out there feel while we’re stuck in the grind. Using verbal imagery to his advantage – you go where Vaughn takes you; his rhymes paint a clear picture in your mind…you feel what he’s feeling. “So Much More” is a heavily emotional cut…some sad, some anger…a lot of mood swings but also a lot of valid observations on-point.

Ending with “Noo*Breed (The First)” – Vaughn closes out his EP with a solid commitment to his signature-style of sending words out of his face at a massively rapid-pace like he’s trying to get out every word he knows onto each one of these tracks. It’s more impressive work from Vaughn…maybe a little darker, a little heavier in the emotions & atmospheres of the vibe & lyrical tone than his previous work; nonetheless…the man has skills all over the place and delivers with a professional’s touch once again on his latest record The Last Shall Be First.

Find out more from his official Facebook page at: https://www.facebook.com/BoonieMay