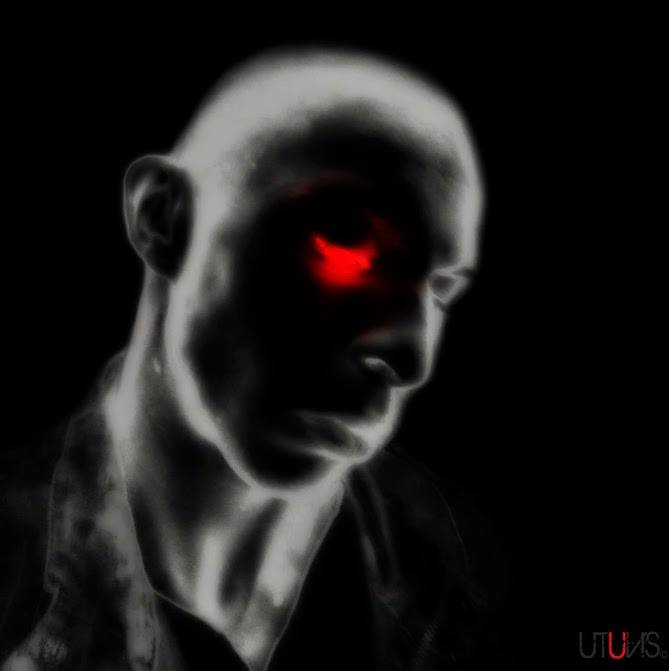 Awesome, is probably a great place to start…

I’ve always been a huge fan of dark electronic soundscapes, and as many of you already know, I’m also a gigantic fan of melody in music, no matter the genre. Utuvis has found a comfortable place in this rare combination, maximizing every opportunity to make these songs envelop and hold on to listening ears. Pathogenic Symphonic is well put together, strikingly intense and as artistic as electronic music can be.

I often talk about my first impressions on an album. This one’s an interesting story…

I had received the mp3 files, but noticed they weren’t in any order other than alphabetical. So in effort to respect the artist as always, I jumped online to see if I could see where the album is sold and view the order. And of course, google-play-store is still unavailable in Canada (Read: Get WITH IT Google!) so alphabetically was the order I was left to go with. From there, I get to make a decision…I could play tracks at random, or I could play them straight alpha-style.

I decided that there was no theoretical way that Utuvis had put out Pathogenic Symphonic in alphabetical order, so random was the obvious choice for me. I clicked on the track “Dreaming” to start…

And within seconds I was in love. It’s just such an incredibly BIG song. The set-up, the bring-in, the beat itself, the emotion that STILL breaks through the distorted and effect-laden vocals…all the pieces were there, flowing beautifully right into my face. I loaded in the other songs one after the other to the playlist and then noticed something else strange within this first experience with Utuvis…

According to my music player – this album was over two and a half hours long!

Keep in mind, at this point, the first track I’ve clicked on, “Dreaming” is still playing in the background, registering at around 5 minutes at length, meaning I still in theory had well over two hours to go on my first listen through the Utuvis material!

So I want you to know TWO things:

Pathogenic Symphonic is just over a half hour in length – don’t be scared. Media players fuckin lie.

I was not the least bit sad at the idea of spending over two hours if I had to on that first listen to Utuvis. If “Dreaming” was my example of what was to come on this album, I was getting my sleeping bag out and preparing to camp out beside my speakers for the night.

So I let the music play out, as it was, without actually knowing the album was much shorter than I had originally been led to believe; and when it ended so suddenly after expecting so many more minutes to come it was like I gained several hours in which to press repeat and listen to it again instead! Sweet deal!

Utuvis (pronounced Oo-Two-Vis) is making a wickedly tempered style of electronic music. Comparisons become tough, it’s a blend for sure…you’ve got industrial sounds, electronic sounds, artistic pieces, vocal experimentation… If I can get anywhere close for you by comparison, you’ll have to imagine something like Orbital-meets-Big Black Delta-and-has-a-dinner-&-editing-session-with-BT. How’s that? NAILED IT.

I suppose what I mean is that you’ll find that back-alley-darkness of Orbital in some of the atmosphere’s created. You’ll hear some of that furiously intense music accompanied by vocals with incredible effects but tangible melody, much like Big Black Delta. And if you’ve got the ear for it, you’ll really be able to hear the work in the editing room; there are sharp and precise cuts and choices all over Pathogenic Symphonic…digital creations so on-point that BT himself would be proud.

If you check out the main homepage of Utuvis, you’ll see an incredibly inspiring quote right there on the main page. It ends with an incredible moving last sentence; one that I would hope would resonate with any set of eyes that might scan them over: “Cease to exist, and LIVE.” I love this quote for many reasons, but mostly for its direct challenge to satisfaction with mediocrity. I too, believe that this life is all about pushing every moment you have to its maximum potential – so to read this encouraging statement to others was truly inspiring and also quite an insight into the overall character and nature behind the music of Utuvis.

“True Power” is another great example of his work on Pathogenic Symphonic, though I couldn’t find any real faults within ANY of these eight tracks. And at the length the album ACTUALLY is, it plays tightly with no wasted space or filler. You can play it and LISTEN to it without it becoming like 85% of the other electronic music that slowly fades into the background whilst you’re doing something else – this will keep your attention in full. As far as “True Power” is concerned…it’s bizarre – I like it so much but I really feel like I can’t define properly in words exactly WHY – let’s just say this track DOES it for me – just this once ok?

But what came along with “True Power” for me, was also relief. I’ll fully admit, once I heard “Dreaming,” I was like, “Oh shit – I DEFINITELY just went and clicked on the best track first for sure…” Hearing “True Power” pop up only a track or two later as well as others like “Innocence Lost” and “They Are Coming” was a completely audible confirmation that there was much more in the tank.

Now, I’ve often said that I’m a SONG guy, not an ALBUM guy – and we all know what the difference is there. That being said – I can hear consistency as easily as recognizing my own name spoken aloud, and Pathogenic Symphonic is exactly that – consistent. If you start out the first track digging Utuvis like I did myself, you’re not going to find yourself let down by any of the other tracks to follow; it’s in his amazing capabilities for CHOICE itself that within reside the true magic of the music of Utuvis.

These are songs that work together to form one overall artistic vision…one complete album…one musical chapter in the life of Utuvis…with a pulse so strong it demands a second chapter.