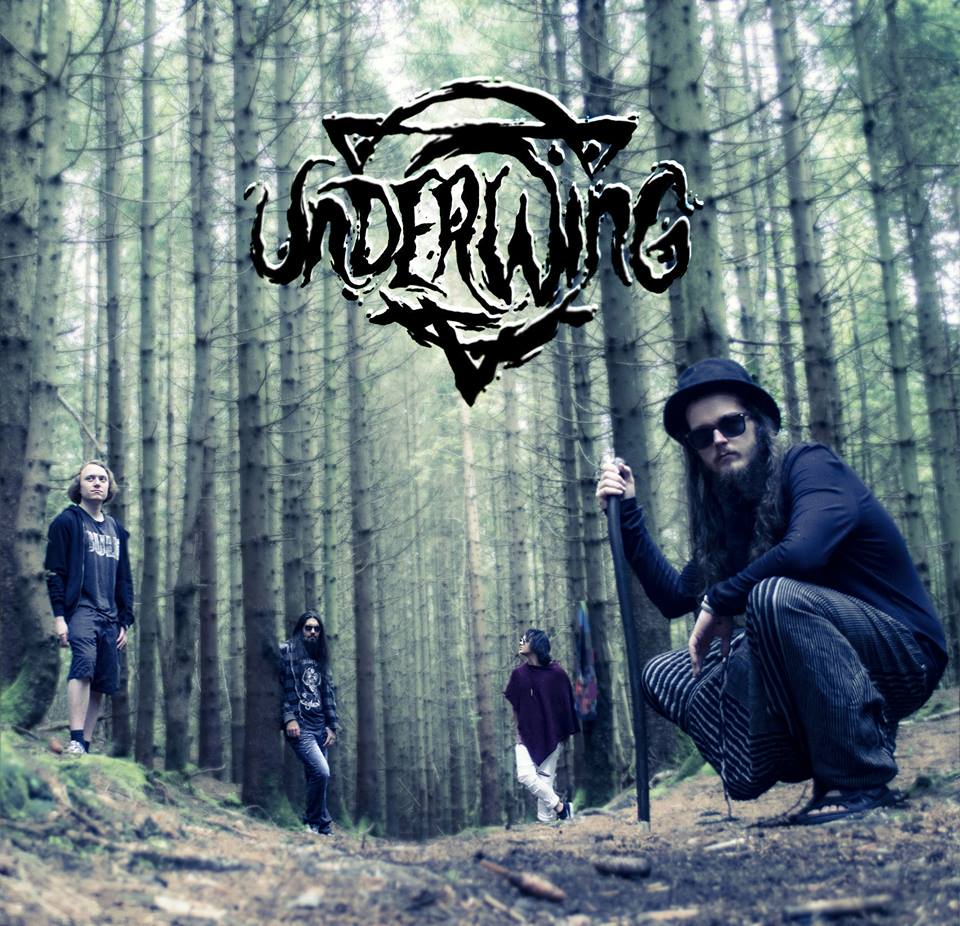 All the way from Norway (well…unless you live there of course) – we’ve got sludge/stoner-rock from the four-piece band Underwing in the form of two singles from their EP Kaela Upsweep to talk about in review here today.

After checking these guys out…I think people would really dig this.  I wasn’t 100% sure with “Reaper” when I first started to listen…I’ll admit it took a couple of listens to fully get my head around this one in the initial experience – but eventually I came around.  What my ears were questioning was whether there was enough about “Reaper” that stood out to me…you know, like a single is supposed to…or whether I was just hearing a mid-tempo groove done really well…if you get what I mean.  It wasn’t until repeating the experience a couple times that I really began to appreciate just how deep some of these hooks had really been set into me.

For starters…the guitars.  I mean…much of “Reaper” is driven by the riffs and crunch of guitars…and they sound really, really damn good.  Everything about Underwing’s “Reaper” is paced-out cleverly and really allows them the time & freedom to concentrate, focus and really get it RIGHT.  I wouldn’t go as far as to say that the hooks are incredibly accessible…I still think they take some time to really set in – BUT…I think that Underwing, as a band, definitely has a lot to offer us.  Very much like early Soundgarden with perhaps an extra layer of dedicated instrumentation and a slightly funkier-vibe in the midst of “Reaper” – but those comparisons can still be made to the rasp in the vocals, the punch in the drums and dynamics found in the bass & guitars.  Underwing goes on to put this comparison into further clarity with the grunged-up & intense sound you’ll find on their second-single released, called “Paragon.”

If we’re talking about a comparison of accessibility and impact though…hmm…to me there almost wasn’t any comparisons that could be made; “Paragon” was miles ahead of “Reaper” in terms of how quickly I was pulled into its heavy rhythm & groove.  Mind you – it’s an eight minute epic exploration into the progressive-side of stoner-rock…and that’s always a lot to ask from the people outside of the genre; for those of you that consider yourselves fans of wilder-ideas and expanded compositions though – you’ll love this track like I did.

I mean…honestly…what’s NOT to love about “Paragon?”  The complex & intricate work from the guitars…the brilliant low-end rumble of the bass and the steady, precision pounding of the drums all work together, transition and switch flawlessly through a song that truly asks a ton from them as musicians.  With impressive results, they make it sound easy for them…you get the impression that this is the kind of demanding track that is written as complexly as it is in order for these four stunning musicians to further challenge themselves, grow & evolve as artists overall.  The vocals again continue to have that Cornell-edge to their rasp…which…again I mean, let’s face it…I can’t get enough of anything close to that sound in my world personally – it’s an extremely welcome sound to my ears.  “Paragon” is absolutely as relentless in its attack as it is stunning to listen to…the kind of song that makes you sit back and seriously think for a moment when it’s all over, wondering how it all came together so damn well.

Really reminds me of that early 90’s era Soundgarden sound…not the LATER part of the 90’s when shit got all fucked up as it headed into the new-millennium…no – I’m talking about the pure, untainted and untamed grunge of the early-mid 90’s…the good stuff.  But at the end of the day…you have to acknowledge the fact that nearly no grunge bands out there would have dared to create an eight-minute epic without fear of falling apart or revealing they only knew the same three chords – and that “Paragon” is nothing like that at all.  At over eight-minutes, this track explores and mines melody, mayhem and a serious grinding of sweetened chords, ideas and musicianship.  It’s got real depth…grunge, rock, thrash, prog…”Paragon” somehow remains incredibly focused while blending all kinds of incredible sounds together and real dynamics in the structure of the writing that are highlighted by the punch in the performance and astounding production on this tune.

I liked both the tunes I heard…but if I was to have to pick the winner at the end of a Fight Club battle here, it would hands-down go to “Paragon” – that’s an incredible cut and a seriously satisfying listening experience that never lets up.  Not too often you can hear an eight-minute tune that doesn’t feel like it drags or stretches in spots – but this is one of them.  Underwing definitely has a lot of power & potential that you can audibly hear in their music…you know it’s there when you hear “Reaper” – but you’re absolutely convinced by the time “Paragon” is done.  Great band to listen to – this was wicked!

Find out more from the official page at Facebook here:  https://www.facebook.com/Underwingmusic