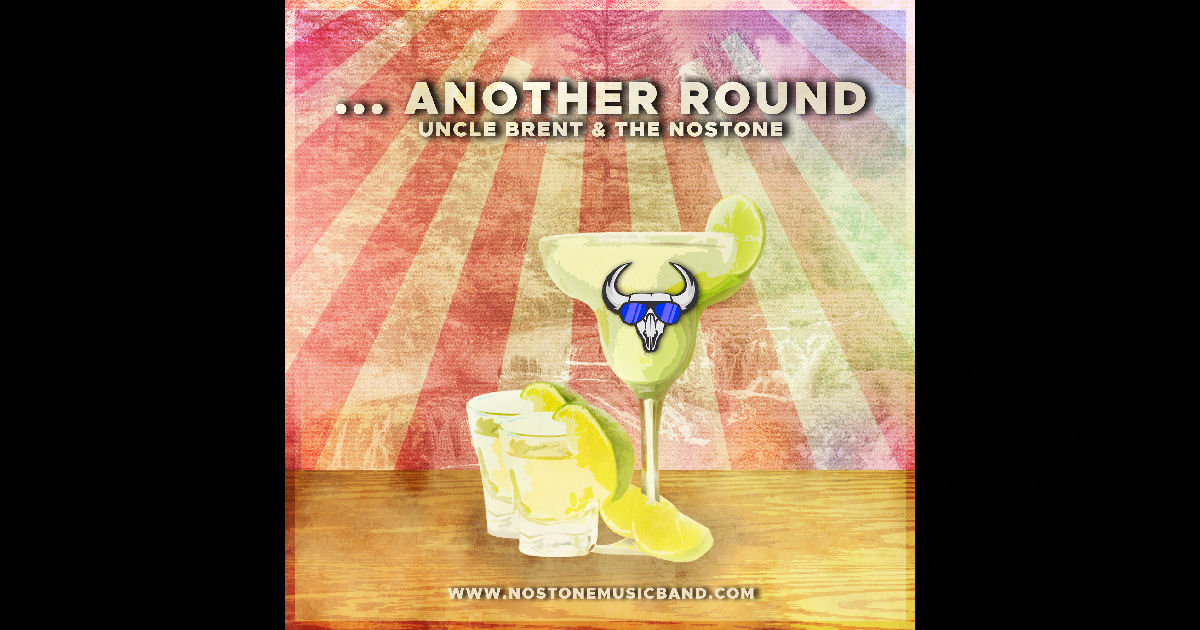 Uncle Brent & The Nostone – Another Round – EP Review

Well now, here we are, back with good ol’ Uncle Brent up on our pages with The Nostone Music Band.  They’ve got themselves a brand-new two-track EP being released in like…hmmm…hours from now I suppose, Another Round comes out officially on July 23rd, aka tomorrow.  I have no doubt that what I’m likely to suggest in this particular review is probably going to go against the popular opinion…or at the very least the fragile opinions of indie music journalists out there that are afraid to level with people.

Let me explain…ain’t that anything is going wrong here necessarily, so don’t string me up just yet.  Here’s the thing…of the two songs we’ve got here…I think they’re about to push the wrong one first!  Or…maybe there’s a more positive spin to put on that – they’re saving the best for last!  How bout that instead?  They’ve got plenty of plans to support both…new videos & shows & whatnot…so maybe it’s all about patience…but by the end of this review, I’d imagine a few of you will agree with what I’m saying.

Because when it comes right down to it, I know that the lead-single “Salt & Lime” is probably closer to what you’d classify as the song you’re expecting from Uncle Brent & The Nostone…this is the tune that seems to embody what the band has always been about, good-times and rock’n’roll, turning it up and letting the fun invade the vibe.  Of course the natural question is; does it succeed in doing all this?  Yes.  Ultimately, while I do think there’s an aspect of Uncle Brent’s vocals that takes some getting used to at times – I think the looseness of the rock-inspired vibe also allows him to let a bit more personality come through the mic here – and I do think that people will connect with that, especially those out there on the dance-floor on a Friday night looking to forget the work-week holding them captive just prior.  I’m a huge fan of the guitars on this cut, which I think bring tons of personality, character, & charisma to this first single from the Another Round EP.  You can hear through the design & flashy structure of the melody that “Salt & Lime” is stylistically rhythmic, looking to catch the attention of ears out there through the playful back & forth of the chords selected and crispness of the guitar crunch & tone.  All this comes out sounding great, the rhythm section itself is on-point and no complaints there really; they concentrate on holding the fort down solid, not so much on taking their own moments in the spotlight – for that, you’re locked in with the guitars and vocals for what you’ll likely notice most on those first spins.  They’re not reinventing the wheel with this tune, nor do they pretend that that’s what they’re here to do…but…BUT…around the two-minute mark…they reveal a hint at something greater.  Or something different…I’m not here to slam on what people clearly love about Uncle Brent & The Nostone, which is clearly the vibe they’ve got going on throughout the majority of “Salt & Lime” – but…just follow along with me here a moment or two…because there are some elements of their sound that I fully believe they should be examining a whole bunch more than the simplicity of a couple chords that might drive the energy of a verse or chorus.  LISTEN to this breakdown would you?  WHERE does it come from?  Uncle Brent has his own undisputed highlights in the vocals here, tenderizing the approach and getting right into the atmosphere as they make their biggest switch in sound around the two-minute mark & add piano into the mix – and MAN, this WORKS!  It works better than just ‘works’ – it sounds sincere, unforced, natural…and real.  I could go on & on about the party-vibe of “Salt & Lime” and the difference between what you’ll find in its verse/chorus Vs. this one breakdown where Uncle Brent & The Nostone reveal they’re completely HOLDING OUT on you…suffice it to say that if you’re looking for the party aspect, you won’t feel as strongly about this moment in “Salt & Lime” as I do – but if you’re just looking for what connects in great songwriting and want to hear a great moment in time, I have the feeling you’ll be on my side of this argument.  Sometimes the shortest parts we include become the most massive reasons to return – and the breakdown of “Salt & Lime” was definitely that for me.

So…yeah…don’t get me wrong, still a decent tune and I get why people would dig it, especially if they’re after that party vibe, Uncle Brent & The Nostone are clearly always ready & willing to supply that for ya.  But if you’re going to tell me that the incredible spine-tingling melody & song they’ve written into the following tune called “Sarah’s Creek,” I might just think you’re crazy.  Of course in saying that, many of you out there in the “Salt & Lime” crowd already think I’m nuts – but for you songwriters out there…you fans of timeless melodies…you people that love songs with depth – how is there any comparison at all?  What I’m saying is that if I were the players in The Nostone or good ol’ Uncle Brent himself, I’d be taking a MASSIVE look at “Sarah’s Creek” and be prepared to overhaul the entire sound of the band towards this direction – because they’ve genuinely got something spectacular and special here in this song.  I think the stripped-down beginning with just the vocals and acoustic works brilliantly…guitars sound great and I think Brent really finds his voice on the majority this tune, perhaps like never before.  I do think there might still be a bit of work to be done here or more to be explored…like, I’m not entirely sure of the added rasp & energy he puts into the microphone when the song approaches the two-minute mark as “Sarah’s Creek” expands musically…part of me thinks the tender & sweet approach he was using early on might have been the gear he wanted to stick with throughout this tune, rather than scuff it up a lil’ bit at this point, know what I mean?  Sometimes when a song is this stunning & delicate, it might serve the song better to keep that energy in the vocals/music as a match, but I also dig the fact that Brent’s trying something different to bring something more to the mic…I just think it might have been one step more than necessary I suppose.  To me, with the expansion of the music, the brilliantly big drums and widespread atmosphere, string-sounds all entering the mix & whatnot – that moment was already on its way to where it needed to go.  So for me, the humble sound of Brent in the verses or choruses before and after that spot ended up making the biggest impact, even though he’s not pushing himself even a tenth as hard energy-wise; but listen to the results!  He’s spot-on for the melody and music there…and given how different this entire vibe is from the rest of what you heard on “Salt & Lime” already, it’s almost a similar impact to hearing “Disarm” for the first time on Siamese Dream – it’s that different from the rest, but that refreshing in how involved it is throughout the writing & performance.  Amazing emotions on display throughout this song…the backing vocals are beyond exceptional and perfectly written into this tune to make an extraordinary impact, which they achieve in spades and add a magnificent/grandiose feeling in the atmosphere that takes this isolated & intimate sound into a lighters-up stadium-filled moment in time you won’t soon forget.  The imagery in the lyricism is solid, beautiful at times, and pensive & thought-provoking at others…overall, it’s a seriously well-written and ambitious tune for this band…and in my humble opinion, they might have just stumbled into something that has revealed the next step in their evolution to us all.

Because I can try to explain it here in words…but ultimately, I know that I don’t need to.  Uncle Brent & The Nostone know EXACTLY what I’m talking about here – because THEY can feel the difference between these two songs when they listen to them as well.  Now it becomes all about making that choice to continue to hammer a square peg through the circle hole, or perhaps admit that the circle shape is just gonna slide on through a lot more naturally…you feel me?  It’s as simple as knowing you’ll hear a great party tune with “Salt & Lime” and that you’ll hear a song invade your soul and send chills down your spine on “Sarah’s Creek” – at some point in time, you have to recognize your own evolution and be ready to move on it.  “Sarah’s Creek” to me, sounds like a band that is really discovering what they’re capable of and the extraordinary wonder & magic of music that comes along with such an intense realization.  I’d be surprised if they didn’t even surprise themselves with this one truthfully.  They might try to convince you that they’re a bar-band ready to party…heck, they might have even convinced themselves that’s what they were…and maybe that is all they were intended to be…at first.  It’s songs as well-written as “Sarah’s Creek” that, once recorded, once played back, and once absorbed – HAVE to be acknowledged as that next-level step they become; it’s moments like these where a band that was once determined to rock the small stages has to wonder if they might in fact, have exactly what it takes to be cut out for the big ones.

AND…spoiler alert…I’m just gonna go ahead and declare that Uncle Brent & The Nostone DO know exactly what I’m talking about.  I’ve seen both the videos they’ve got set to release for the two songs on Another Round as well…and I’m just saying…one of those videos seemed to come out pretty darn good while the other was stunning & took my breath away.  I’ll leave you guys to wonder which is which for now…but not really…you’re all smart people and they are too – we all know what I’m getting at here.

Find out more about Uncle Brent & The Nostone at the official pages below! 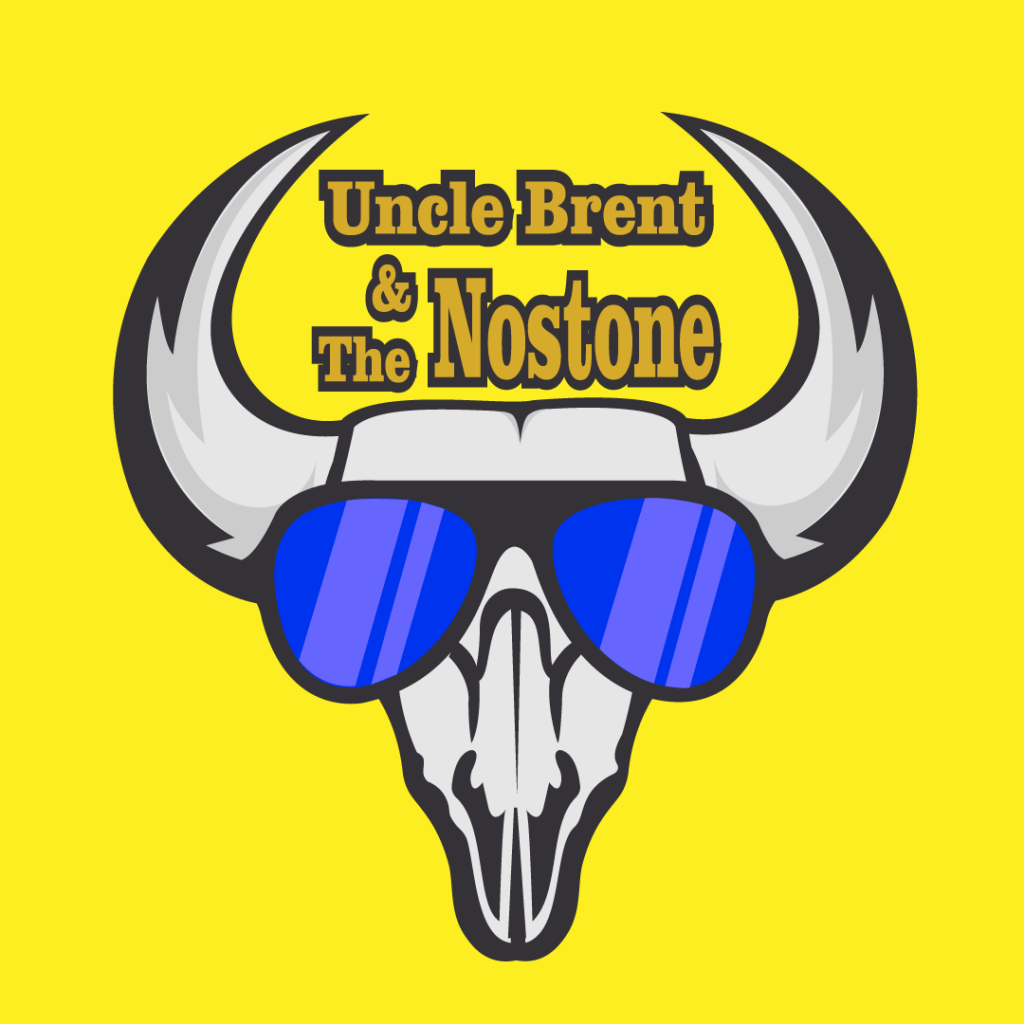 Tags: Another Round EP sleepingbagstudios Uncle Brent & The Nostone