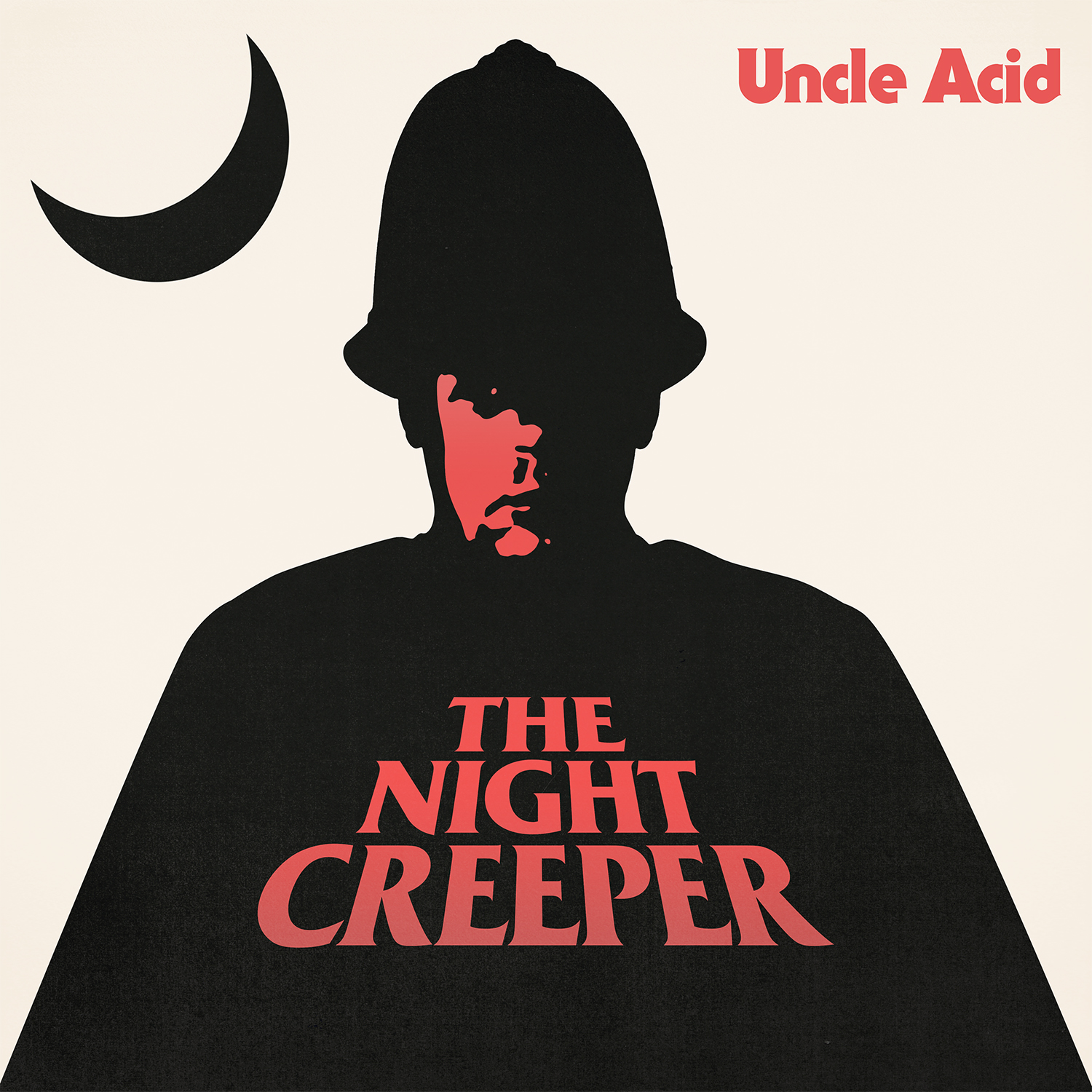 Oddly enough…I kind of expected somehow I’d be latching onto Uncle Acid & The Deadbeats a little faster than I’ve been digging into it. I mean…a TON of the right ingredients are here…you can hear them all right away in the first cut off of The Night Creeper called “Waiting For Blood” – I’ve got my FUZZED out, distorted guitars, inventive vocals and a real thick atmosphere in the music combined. So…as to why I felt half of this album resonated more strongly with me than others is actually a little bit of a mystery to even myself at the moment…this album took a little bit to convince me…but I think they’ve pulled it off by the end.

It’s groove & rhythm-rock with a strong inclusion of psychedelic attitude…but I could see some people leaning towards labelling dear ol’ Uncle Acid & The Deadbeats as completely riff-rock; these songs are quite lengthy…and in some instances I think that costs them a little. The reliance on some of these killer-riffs tends to water them down slightly…I’d cite “Murder Nights” as perhaps the biggest offender in this department…the idea is there and it’s a killer one, but over the course of five-and-a-half minutes the idea begins to drone and wear you down a little through the weary tone of the mood in the music. Not quite enough changing or happening in this particular cut to really keep us engaged, and though I like the lead-guitar line, it’s a little on the choppy-side of sound as defined as it is. The switch towards the final minute of this tune saved it all…just in the nick of time if you were to ask me…I knew it wasn’t pepper or salt, but I did know that this tune needed SOMETHING before the end!

What I really found myself digging on throughout The Night Creeper was the element of old-meets-new. A song like “Downtown” sounds like a demented, lethargic version of The Beatles in a completely spaced-out psychedelic grind. Though I thought both “Downtown” and the song to follow “Pusher Man” both suffered slightly from the expanded-riff syndrome, I also thought these two made for stronger songs overall with a larger incorporation of melody and more dynamic structures. Particularly, “Pusher Man” is an example of Uncle Acid & The Deadbeats ability to really incorporate a ton of unique ideas under the umbrella of one song-name. Like an explosive combination of The Black Angels meeting Pink Floyd…the harmonies, the energy, the storming distorted-melodies…it all works perfectly here and The Night Creeper is starting to hit a real stride for me right around here.

At the risk of the band hating me…I’ve gotta say, “Yellow Moon” is fucking rad. It’s a complete departure from the sound of everything we’ve heard so far on this album…I’m not so sure I could say confidently that it represents the overall sound of what they’re all about…but MAN does this track work for me! Brilliant, sparse atmosphere…like a mystical-melody that lulls you into dreamland…or like the sound of the moment just before you consult the Zoltar-machine for your future-fortunes – right before you go all Big, Tom Hanks-style. “Yellow Moon” also makes the stomp and thrash back into their signature-sound a lot more appreciated – “Melody Lane” is HUGE and becomes more & more massive as it plays on. In a bizarre twist of sound once again, the tones on this come out closer to the Neil Young electric-side of life than their twisted take on the Fab Four from earlier – a sound they return to successfully in their title-track “The Night Creeper.”

Like your favourite copy of The White Album left out in the sun for a hot afternoon and then played via cassette or record…”The Night Creeper” is a revolving-door of swirling, classic-rock melody. Maybe a little more to change within the song again to keep us that much more involved…the song still loves its main riffs, but over the course of the six-plus minute-long song it weaves through its changes subtly & deadly like a snake in the grass waiting to strike. Particularly digging the guitars in around the four-minute mark…Uncle Acid & The Deadbeats definitely know how to form attachments to riffs that will form an attachment with us – and while there have been some truly outstanding guitar-solos all throughout this record…I don’t think they get any better than this one! It leads “The Night Creeper” to an epic ending and starts another run of real ingenuity from Uncle Acid as “Inside” starts to kick its boots and march into & out-of your speakers. This tune sounds like it’s ready to gut-you with the slightly-sharpened edge of a dull-spoon out in the jail-yard…it means business and comes across as severe & serious an audio-version of what it sounds like to be Robert Patrick running after a young Eddie Furlong.

“Slow Death” has a lot in common with space-rock acts like Mogwai, or This Will Destroy You! As the title suggests, this grind is not so much a sprint as it is a marathon at nearly eight minutes in length – but this gentle-build triumphs over time, swelling, changing & evolving right before your ears. As they transcend through space-rock like terrain, laced with tiny-melodies throughout, “Slow Death” becomes larger and larger as it makes use of the space, silence and instruments in the right moments all throughout.

I think…although it’s a ‘hidden-track’ were you to listen to this album on record or disc, that “Black Motorcade” was a great way to end this album. It’s already hit a real peak with the climb to the end of “Slow Death,” which provides the meatiest-ending the album needed – “Black Motorcade” with its tender & gentle-nature/departure from the noise-collage of Uncle Acid is like that extra mint that comes after you already had an awesome dessert. You know the one I’m talking about…it’s not just mint, it’s got like, chocolate & stuff too…that one – the GOOD one. I felt like “Black Motorcade” worked the same way…it was more of a good thing, but part I hadn’t experienced yet…and it ends perfectly isolated.

But the OTHER reason I loved “Black Motorcade” where it was, hidden way back there…was because I have a tendency to leave my playlists on REPEAT…and when doing that, coming back to “Waiting For Blood” gets radder, bigger & badder every time. The ending of The Night Creeper basically makes it perfect to start up & experience all over again…you might get caught in the same loop that I’m in now…the one where you can’t deny that Uncle Acid & The Deadbeats make music that grows on ya.

Find out more from their official page at: http://acidcoven.com/