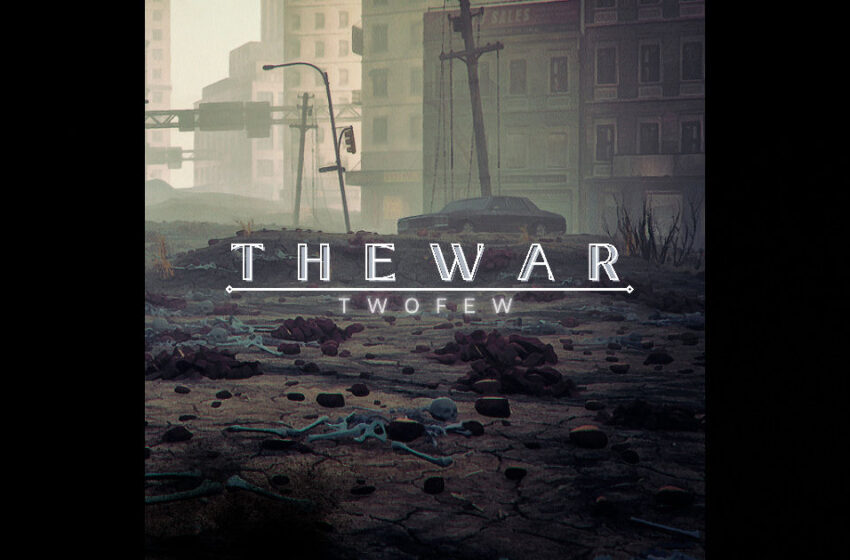 To be fair to TWOFEW, as far as I know, they didn’t cause “The War” we’re all currently witnessing from afar, and this song would have been written long before Russia’s nightmarish invasion of Ukraine – so don’t go holdin’em personally responsible for all this carnage out there!  That being said…it’s kind of eerily prescient in that same respect now…and even though it’s not a song that’s based on “The War” that has broken out between those two countries, it’s hard not to associate’em together right now.  TWOFEW has always tended to write from a much more personal point of view – relationships, feelings, emotional struggles…and I’d wager a guess it’s fair to say that “The War” represents a metaphorical variation on that once again, as opposed to finding their way into the political sphere.  It ain’t impossible…just improbable…TWOFEW has their thing & there’s been no real reason to deviate from the path they’ve been on when the moves they’ve been making have proven to be reliably successful.  That’s not to say there isn’t still innovation and evolution occurring constantly with this band – many of you have learned about’em right here on these very pages of ours and been riding along with me as I’ve been listening to TWOFEW find the pieces required to become the juggernaut they are today.

The same is of course true for their new release “The War” – you can hear that TWOFEW is once again moving the needle in the right direction and further refining what they create together as a unified five-piece now.  Many of the main differences I hear in this particular cut seem to come directly from the microphone and the way that Michael sings “The War” – I don’t know if it’s as simple as he’s standing closer to the mic, or just making more use of his range on this track, but you get a more versatile and dynamic performance from the man this time around that’ll take him from more of a hushed melody all the way through to his large signature moments, and the dude sounds right into every moment of this single.  I wasn’t even 100% sure if they even got ALL of the hook on this single if I’m being real with ya…at least on the first spin or two…I came around quick enough.  As they were heading into the chorus with the ‘whoas’ & whatnot, it seemed like it might have been a great opportunity for some harmonies to back him up, or maybe a bit more power added to that particular moment somehow…but as it stands now, I ain’t disputing the fact that his vocal-hook on its own works wonders already.  TWOFEW has such a gift for finding single-worthy sounds and hooks that’ll stick in your head for days & days on end, if not months & years like they’ve been rattling around in my brain – and “The War” is every bit as much of a highlight example of that uncanny ability as you’ve heard from them to-date without question.  No joke folks – this is the kind of song that’ll have you paying full attention within less than ten seconds, and the sound of the piano will instantly put you at ease, sending you the signal that you’re in-store for a well-executed & cleverly thought-out song loaded with moving melody.

As with just about every TWOFEW track I’ve ever listened to, within a couple spins of “The War,” I was beyond hooked…I’d practically had it memorized, with the main hooks navigating around my cortex like a satellite.  With production as on-point as the performance is here by the entire band, each and every time we hear a new track from TWOFEW, it’s like they’ve tapped into how they want to sound just that much more than the time before…there’s a real warmth in the boards here that works wonders for “The War.”  Plus, I mean…there’s the more obvious reasons too, like time & experience & the role that plays as a band carries on…TWOFEW has been tightening up the corners from the moment they started and the results of their efforts are really starting to be revealed.  You listen to a track like “The War” and there’s not a doubt whatsoever that it comes from a band that is bonded together & on the same page – there just ain’t any flaws to cite, or any weak points in any of their instrumentation individually, or when combined.  They keep on revealing gold, stronger songwriting, moments in music designed to last longer, and songs built with a burning passion for the craft altogether – you hear a song like “The War” and you know it’s been recorded by a band that’s in it for REAL, not part-timin’ it, you follow me?  I’m not saying they don’t have stuff happenin’ on the side – maybe they do, I don’t know – all I’m saying is that when the red light in the studio comes on and it’s time to record, this crew knows how to put in the work and get serious when it’s called for.  I say ‘when it’s called for’ because anyone that’s seen our video-interview with TWOFEW knows full well they sure as hell make a whole lot of time for fun in the process too.  I also suspect we’re gonna see some of that onscreen when they unleash their animated zombie-based video supporting “The War” coming up soon, in addition to having them back on SBS Live This Week again in the near future this year.  They’re always up to something, and that something is workin’ out real well for TWOFEW…the constant attention they pay to their band is yielding all the right results, and “The War” speaks volumes on behalf of their continual evolution leading to their very best.

With TWOFEW’s main man Chris Lawrie co-producing “The War” along with Grammy-winning producer Brendan Dekora, whose credits span from The Boss to Nine Inch Nails and twice back around the world again, they’ve not only got a great song, but a song that sounds great.  Cleverly balanced from start to finish, “The War” really makes fantastic use of their collective skills, and everyone gets their moment to shine in the spotlight.  Some for shorter timeframes than others of course – I think it’s gonna be pretty natural for most ears to gravitate to Michael Lazar’s lead vocals and the melodies from the microphone, but let’s give it up and get a round of applause for one impeccably tight performance by the band as one too eh?  Especially when you get those instrumental-based breaks in between the choruses & verses to follow – the guitars from Mike & David sparkle with the right soulful & evocative tones that sincerely connect, the drums from Sir John Grigsby are as reliable as ever, and the bass from Danielle has perfect presence throughout this entire tune.  I maintain – TWOFEW came out sounding great to begin with, but I really believe that each time we hear them, they not only show us something new, but prove they’re getting better with every opportunity that presents itself to them.  I am 100% STOKED to see this new video they’ve got and show it to you all here on our pages…I freakin’ love zombie stuff and I’m all about cartoons, so like…c’mon now – how could I not love what’s coming out right around the corner from TWOFEW?  Keep your eyes & ears peeled for all kinds of exciting stuff happening with this band over the course of the next month or so…we’ve got interviews planned, music on the SBS Podcast, an all-new appearance on SBS Live This Week being filmed in the background already…all this in addition to a whole bunch more awesomeness they’ve got planned for ya long beyond, for the rest of 2022 to come.

Their efforts & dedication to your entertainment alone deserve your support, but it’s their music that’ll earn it with ease – TWOFEW is a band you wanna keep at the top of your playlists, and they’ve given you another stellar reason to do that with “The War” – this band knows single-worthy sound inside and out.

Find out more about TWOFEW from their official website at:  https://www.twofewmusic.com