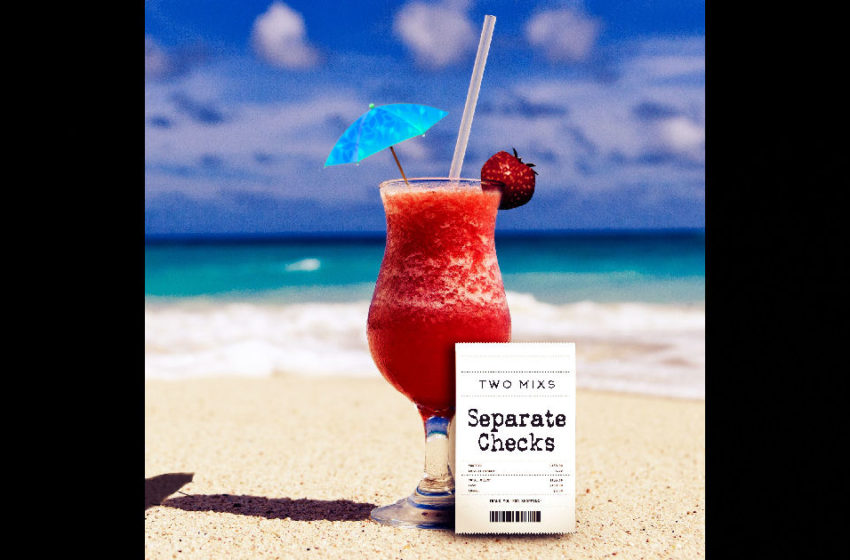 Three really different tunes from TWO MIXS here in review today…almost surprising to find them all on one record when it comes right down to it – Separate Checks is actually quite a trip.  And I suppose in this particular case, I mean that fairly literally in both meanings; this EP is a trip in the sense that each idea & song really present a whole different side of the sound & personality in the music of TWO MIXS – but also a trip in the sense that like…it seems like there’s an island influence, or at least a vacation-like atmosphere that runs through the spirit of these tunes.  That might be as close as I can get it for ya without you experiencing the music for yourself…there’s no real categorizing TWO MIXS at this stage with three totally separate vibes on Separate Checks…it’s not limited to one genre here by any means.

So let’s see here…what can I tell ya about what I’m hearing from TWO MIXS.  My gut tells me that we’re still in the beginning phases of TWO MIXS’ journey into music – but I definitely hear potential and a lot of positive reasons to keep this project going.  For the creatively-free aspect of the uplifting feeling that comes along with this music alone, that’s already a more than strong enough reason to keep making this music.  With three separate sounds & directions, we’re all bound to have our favorites and results are going to vary with listeners…that’s only natural; the most important thing is that there are indeed ideas here and an audible desire to make music that you can hear.  With those two ingredients, TWO MIXS can continue to move the needle in a positive direction over these next years to come for sure.  Plus, as I’ve mentioned many times here at the pages I’m sure, the more diverse & versatile the beginnings of your career are, the more freedom it’ll lead to creatively later on – and your fan-base will stick around.

A lot of the acceptance of TWO MIXS will come down to placement…where the songs end up and who hears them, and in what kind of environment.  Like for me, listening to “Mojitos In Santa Clara,” I feel like it’s likely intended to come out as a gentle Pop tune – and in a lot of respects, it could fit there – but when I think about this song’s potential in the Indie scene, I think the degree of accessibility opens up.  TWO MIXS if anything, has a few choices to make in terms of what style is ultimately chosen, or if the thing is going to always be a combination of sounds within this project…either way, it’s likely that next set of tunes after this one that’ll confirm which way has been chosen.  Right now, it’s that thread of Pop in the music itself that’ll connect these three tunes together…but other than that, they all really have their own sound & style.  “Mojitos In Santa Clara” to me, was a song that…hmmm…how do I even describe this?  Alright…so…I mean, it’s super-pleasant…little bit hazy & extremely laid-back in the vibe, but it’s actually quite fun and sweet at its core.  Where I think that a song like this runs into problems is what it could potentially compete with out there in the music-scene, no matter where you’d place it – “Mojitos In Santa Clara” is such an innocent & humble love-song that the last thing it’s going to do is punch you in the face for your attention, know what I mean?  And this is why placement is key – because a song like “Mojitos In Santa Clara” in the right independent movie, could be the perfect fit.  Just picture it for a second…the opening of a movie as you pan into the scenery & credits, or even some kind of quirky love story…this song would slide right in there and potentially find an audience that way.  On a personal level, of the three tunes, I probably ended up enjoying this one the most from the set – and even now, I still don’t feel like I can accurately describe WHY that is!  I’m a big fan of College Rock, Indie, Art-music…all that kind of stuff…and there’s just really something appealing & endearing about “Mojitos In Santa Clara” that seems to turn what could have been cheesy into something verifiably cool.

“Tequila Sunrise” is a bit more involved from a music/instrumentation standpoint than the first track was by comparison, and ultimately, there’s a really powerful hook in the chorus of this tune.  While it’s still pretty chill in the vibe & approach – this is where I’d encourage TWO MIXS to take an objective step back and examine how to serve the song in the best ways to suit the dynamics of the writing.  And keep in mind – we might disagree here as listeners, that’s again, only natural – but what “Tequila Sunrise” left with me as far as a lasting impression is concerned, was the positive reassurance that TWO MIXS has a lot more in the tank still.  Weird thing to come out of a listening experience as the take-away right?  Not so much really – potential is something you can always hear if you’re paying close enough attention.  On “Tequila Sunrise,” TWO MIXS has the right ideas for sure – now it’s all about raising the bar for the execution to match the power of the writing.  Here’s what I mean…essentially, you can hear the vocals holding-out or holding back on us in this tune – almost in an audible trade between power for tone.  So the end results, become that “Tequila Sunrise” undoubtedly has a brightened & sweet spirit & sound that still comes across – it’s a bit more dusty than its full-potential could yield…and that comes down to that power of the vocals being dialed-back perhaps just a bit too much, or the parts being sung more quietly in an effort to maintain that tone.  It ends up coming out kind of like the James Iha effect, when he ventured out solo, away from the Smashing Pumpkins…it’s a delicate and sweet sound that you want to preserve and keep intact, but one that you can feel still needs a bit more oomph & power to get the full sincerity, emotion, and meanings in the words to connect completely.  I’m not entirely in love with the verse, but I’d argue with anyone out there in defense of TWO MIXS and that it works here in this song, just not my own personal favorite part, that’s all.  The chorus, I really believe, is an exceptional moment waiting to happen…I ain’t gonna lie to TWO MIXS or any of you out there – “Tequila Sunrise” is in need of a remix to round out the corners, but I think the main hook of this song in the chorus is likely the strongest one you’ll find on the Separate Checks EP.  Get that power into the vocals and go BIG in that moment I’d say…I think if you can make it feel like everyone in the room is singing along in the chorus of “Tequila Sunrise,” there’s a great chance it could entice it to happen out there in the crowd too if TWO MIXS decides to bring these songs to the stage.  It’s a vibrant melody and a sweet beat – I think the more into this moment that TWO MIXS gets and really feels the vibe & energy of this song and lets that creativity & uplifting vibe take control with no limits, the better the results will continually be.

The song most ready for universal consumption right now is likely the final cut of the three, “Latina Screamahs,” where TWO MIXS will shift this electro-infused set of island vibes to branch out further and include Hip-Hop bars inside this colorful tune.  I think the energy is there on the mic, great presence in the vocals, it’s lyrically modern…and all-in-all, I can hear the larger degree of accessibility in this particular cut…there’s more here to hang onto from beginning to end.  Part of that is due to the fact that the rap never lets up, tells an engaging tale of life/love, and keeps our ears on that aspect for a large part of “Latina Screamahs” – but even mix/music-wise, it sounded like there was a bit more to the composition & writing on this last track.  Consistency is key here, and “Latina Screamahs” has more of that than the others by comparison overall, even though personally, I’m a bit more partial to the highlight moments in those first two tracks.  As far as the people go and what they’re listening to – I have little to no doubt at all that the more energetic sound of “Latina Screamahs” will be the cut they likely remember most…it’s fun, it’s well written, lyrically crafty & poetic at times, and the music moves dynamically, supported huge by that main vibrant electro-synth melody leading the way on the surface.  You get real personality on the mic here – and I think that’ll count for a lot when it comes to listeners out there when they listen to how this tale of love on the island gets twisted around.

I’ll say this in closing…I think that “Latina Screamahs” is probably destined to make the most instant impact with the people out there – it’s a solid party cut – but I’ll argue right to my grave that the potential that exists within the first two songs is even greater.  Might need a remix, might need some refinement – but there’s something uniquely special within both of those tunes that if TWO MIXS can somehow tap into that permanently, whatever that intangible magic may be, the future possibilities for how many people the music could reach & where it could go, would be theoretically limitless.  It’ll definitely be interesting to hear how TWO MIXS chooses to define its sound in these next years to come.