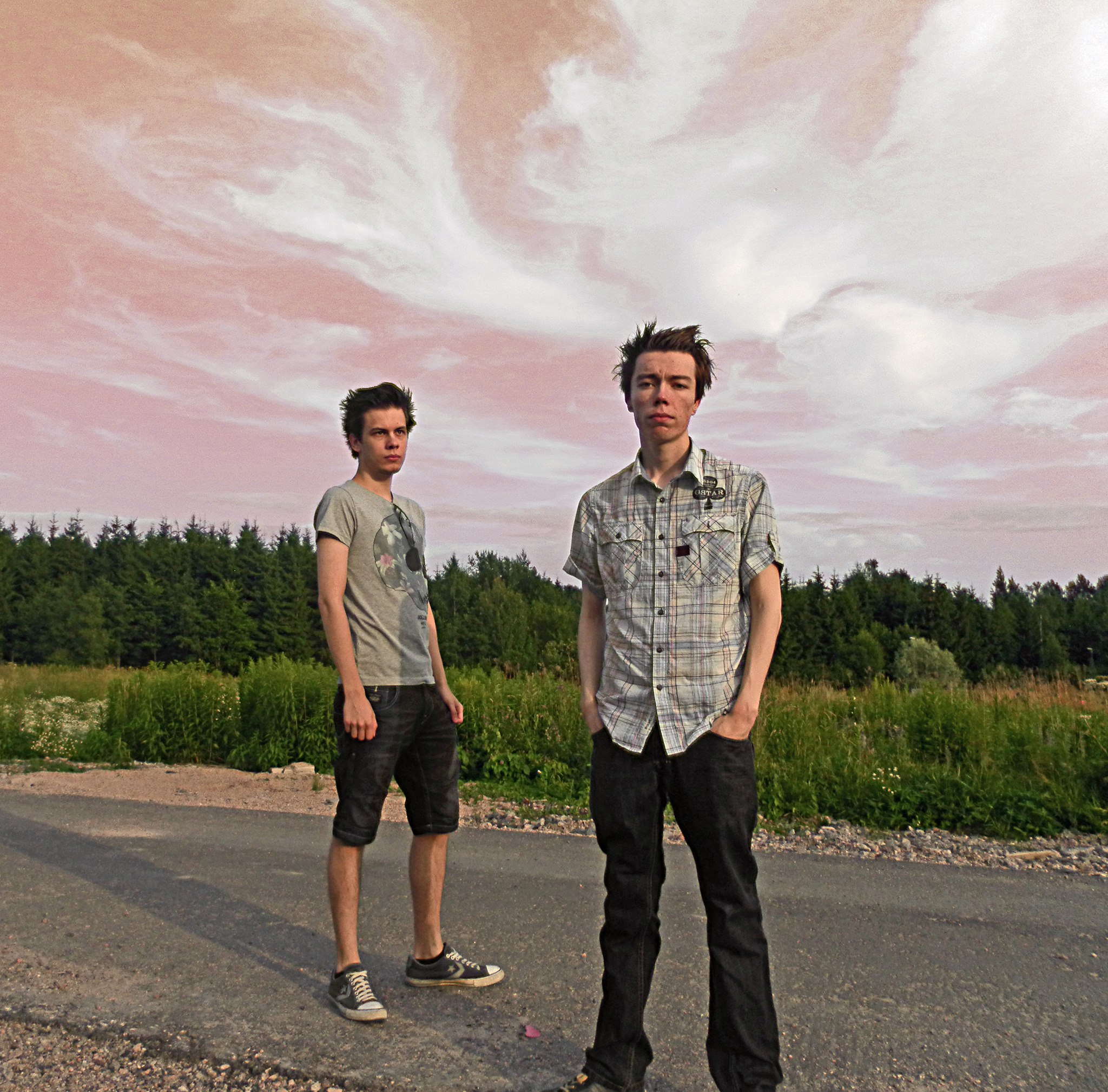 Do you fine folks remember that craze of the internet…probably about say, like four or five years back, maybe shorter, maybe longer ago…but do you remember when you were watching that nice, soothing, calm video that someone wanted you to check out online, only to find yourself desperately wishing you had worn your brown pants after sharting yourself when a horrifying image comes up on the screen with a scream or a burst of static? Welcome to the musical equivalent of that jumpstart & shock to your system…I present to you, TwelveOfConfusion. I’m not even kidding…if you can escape the jolt coming at you in the opening track “Leaving Everything (For Something Better)” you’re a person built upon far more solid nerves than I.

This two-man project is a side project of Lauri Santeri Lohi, who we’ve met before on these pages through his music in Charming Timur. Joined by fellow Finnish bandmate Mikael Koskinen, TwelveOfConfusion brings an interesting dimension to a sound that’s still definitely recognizable to the work that Lohi has begun. In that sense, it’s definitely not a theory lost on Lohi, that the sound he creates is fairly niche in its listeners…that’s something he’s well aware of already.

You can consider me one of those. Though HOWEVER you might want to describe either of Lohi’s bands and sounds, whether it’s noise-rock, post-black-metal, electronic-metal…whatever it may be, there’s a true art to some of these punishing and brutal sounds he creates. Truly. Even when it comes to the layout of the album itself, he made sure that this combination of a two-part album starts with part II, just to make it that much more confusing for us all.

And if ya can’t handle a little art….a little brain-work….and a LOT of listening….how did you FIND our website anyhow? Beat it!

A track like “Mundane” packs much of the incredible punch you’d expect in a Lohi project. With clever switches in timing, challenging parts that come together darkly and a wall of sound that could crush an entire village, you can hear his signature style guitar and scream come through as clear as a car crash right next to you. There’s so much power in Lohi’s voice that it really blows my mind just how hard this guy can squeeze himself into a microphone; even though these mics are completely inanimate objects, I’d still bet money that they’re absolutely terrified of him.

While I dig “Mundane,” and “My Automation,” I’ll fully admit, at that point on Worldsun I felt like it would be tough to distinguish this particular project from Lohi’s other in Charming Timur. It wasn’t until the fourth track in, “Resistance,” that I felt the album made more of a return to its opening track, where it was a little clearer that this would be similar music, but different. At over seven minutes, “Resistance” is a complete beast and one where you can clearly hear how Mikael Koskinen has made a difference to the feel and direction of the music through the complex parts he’s playing and the style in which he does. And I can absolutely admit; maybe even as far back in my history as like, four or five years ago…I might not have even given music this aggressive a chance. So glad I changed!

Listen to the ripping throats on “City Of Diamond!” I mean DAMN Lauri! Get this guy a coughdrop! Better yet…a package of’em! He’s gotta be sore after that performance…this guy displays, time after time and pound for pound some of the most explosive vocals I’ve ever heard in my life. And you know what? That excites me; I know through what he chooses for sound, tones and songwriting choices are ALWAYS going to be inventive, interesting, complex and intensely dynamic. Trust me – he never disappoints, and this track is only more proof of that.

This combination between them simply gets stronger, believe it. Tracks like “(Straight) Into The Sun” again demonstrate their ability to shift and shape sound to their sheer imagination and bring a real vision to life. Love the switch up around the two minute mark here…a nice subtle groove before taking us all over in a wave of sound once again.

I always wonder just how much of this people would ‘get.’ I think of people like Chris Romans of The Last Surrealist….he’d love this album….more than likely Ryan Rutherford of Closer would be in on this too…but they’re freaks like ME…and as far as potential crossover to the pop-friendly radio-stations of our world…well, they all know collectively, the odds are lower than low-end. But just like all of those projects/great bands I’ve named here – this knowledge they share allows for some true innovation and art to creep into genres that the masses typically write off as ‘just noise.’

Now…I don’t KNOW this for a fact…but if I had to take a guess at where the division between Part II and I are, I’d venture a guess at “Hall Of Gods.” For a band that smacks you with sound at every turn, “Hall Of Gods” nearly opens with a more ‘standardized’ beginning, if that’s even possible for these two! But comparatively, these are pretty playful tones, I’d imagine that the potential of opening Worldsun with Part I musically, might throw people off just as much, if I’m right about “Hall Of Gods” starting it all out.

I think “Ghostworld” showed a lot of ingenuity. Lohi has a few recognizable tricks up his sleeve from track-to-track, but I felt like he really played this one out differently through the vocals, which now, at halfway through this album…perfect time to do something new and keep us interested. Through excellent additions made to the music with subtle electronics, Koskinen demonstrates what a vital part of TwelveOfConfusion he is; his parts in this track are brilliant.

I can’t even imagine trying to mix the loud/quiet sounds of this band…and there are a few moments from song to song that you’ll hear that audible struggle. “City Of Gold” comes ripping out of your speakers at full-crank, whereas the next tune “We Are Hollow,” will have you turn it up again just slightly to get the volume back. So there are a few issues there, which may not be issues at all; in a noise-metal experiment like this, it could very well be purposeful. In any event, volume is one thing that certainly doesn’t factor into the writing of a song…you can always work that stuff out later. “City Of Gold” and “We Are Hollow” pound out just as hard as the rest when it comes right down to it. I love the ending of “We Are Hollow;” it was like what I’d imagine it would sound like at the center of a black hole. Awesome.

If you’re still with TwelveOfConfusion by the time that “Elucidation,” an eight-minute-monster, starts out; you’ll be with them til the end no question. Perhaps the most dynamic of a track within itself, this one changes around to completely unexpected sounds at this point in the album. Again, that cites some pretty ingenious layout on this album, had it been in the standard Part I and II form, I don’t know if it would have retained as much of the ability to continually change through its atmosphere and sound as Worldsun is currently laid out in.

As hard-hitting tracks like “Villein’s Ascent,” and “Tranquilty,” take you towards the final epic track “Celestial Destiny,” I’m realizing just now that this is the full-eighty-minute album I thought was happening. Listening to the music of TwelveOfConfusion has that same effect as going into a dark movie theater for two hours and forgetting entirely that it was sunny outside. When you snap out of this music, it’s as if the world just stopped moving entirely.

“Celestial Destiny,” again, another track that I felt reached for a bit more than some of the others through the choices in songwriting, providing a finality you want to strive for when creating a lasting impression on an album. The instruments echo the ‘nothing left in the tank’ feeling that TwelveOfConfusion must have as far as energy is concerned after pounding out a set like this…until of course, they make that switch once again. With dark-pulses electro from Koskinen masking the final gurgles and screams from Lohi…it would definitely seem to be the case that these two are quite comfortable making beautifully brutalizing music together, and I’d expect this won’t be the last time we hear these guys.

No. No no…I don’t think you get what I mean. I finished playing this album about three days ago…at least I think… But you see…the thing is…the songs were SO loud and SO intense that I swear I still hear them playing in my head, days after the fact. I’m kind of wondering when or if it’ll stop…but I don’t see a need for seeing the doctor about this, I really don’t mind at all. Who needs sleep anyhow?

TwelveOfConfusion has just joined the ranks of Facebook – drop in and see what’s up, support and like their page at: https://www.facebook.com/pages/Twelveofconfusion/390293611147156