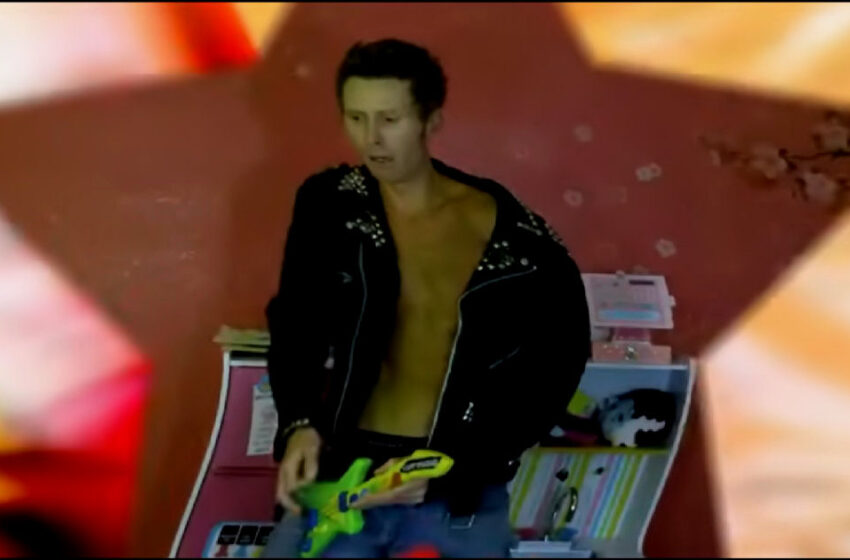 Punksatoney Trey has not seen his shadow, so we’re all set for spring y’all.

And what, dear readers, would a new season even be without new music from Trey Wonder?

Back in action with a fresh set of tunes dropping online including singles “Element 115,” “She Hates Vaccines,” and “Eating Me Alive” – the ever-hyperactive punk has already been making the most of April 2021 with an onslaught of new material.  With two of the three cuts even having full video support as well, there’s no doubt that over there in Hawaii, the man’s been hard at work doin’ his thang in the lab and preparing a bunch of tunes for another banner year in the ol’ music-career – so keep your eyes & ears on his pages, cause Trey Wonder literally, audibly, and visually…well…he’s always up to somethin.’

“Element 115” heads straight out into the stratosphere & beyond for its otherworldly theme – and just in case you somehow missed the visual cues in the video that will clue you into what the song is all about, Trey will make sure to clear up any potential grey area by simply singing out “Bob Lazar” and “Tom DeLonge” by the end of this single.  As I’m sure many of you are aware, they’re known as both alien enthusiasts and conspiracy theorists, depending on what side of the skies you’re looking out at, but there’s no missing the tie-in they’d have into the words of the song…and if you somehow missed it all by that point, you’ll hear those names, go back & spin “Element 115” again, and then go “ohhhhhhh” as you finally realize what it’s all about now.  Solid cut for Trey though – I think he’s got a huge hook in the addictive guitar-line of “Element 115” that absolutely hits the mark in that gritty college/indie-rock tone he’s rockin’ – without a doubt my favorite part of this first single he’s just released, it just sounds awesome.  Video is cool too – it’s already out there & bumpin’ hits, sure to resonate with fans of Trey’s quirky style.

Reworking the core melodies of “Stand By Me” and “Last Kiss” to unapologetically suit his alt-punkster needs on “She Hates Vaccines” however he wants – this second cut that was released today is one of the most lighters-up moments you’re likely ever to find by Trey…and it’s definitely a style I’d be looking into more if I was him.  It’s an oddly endearing single that’s not a whole lot like much of what we’ve heard from him in the past…being punk & all, it’s rare to hear the man let the BPMs fall too far, you dig?  Hearing him take a time out for a more mellow moment here ended up giving us all a glimpse further into Trey’s music, and it felt like he pulled out a pretty significant win with a more gentle approach to “She Hates Vaccines.”  It’s a beautifully quaint song about how life is basically killing us in different ways all the time, be it through conversation, the mundane, the news, where we live – and of course, vaccines as well…or that is, at least the endless debate around them all had by about everyone we all know daily.  It’s weirdly charming, but so too is the man behind the music…plus, it has a fully stellar guitar solo; all these three singles do, but I’d say this one’s most likely my favorite.

Mere moments from now, rumor has it that the third single “Eating Me Alive” is getting its official release tomorrow on April 3rd, and it’ll have a shiny new video accompanying its arrival as well.  This tune was quite a trip with its massive, large & looming intro – and Trey goes on to display a real range of versatility inside of this one experience.  Lyrically, it arguably comes out the strongest of the three – and structurally, it’s probably a bit more ambitious in its design by comparison as well, giving us all a little more to chew on as he transitions from wild moments of instrumentation & heavy grooves, right back to our regularly scheduled freakishly fast-paced programming that we know & love – and by the end, he’ll even switch it up entirely and lay down the most chilled-out & melodic moment we’ve heard from him to-date in the finale.  That’s RIGHT – even more chilled-out & delicate than the bulk of “She Hates Vaccines” folks – Trey’s been branching out over there, and it’s sounding like he’s found new inspiration.  In particular, listening to “Eating Me Alive” and the rad guitar solo he’s got in there, made me really appreciate how he’s almost always got an incredible solo in the mix for ya, like he does in all three of these tunes – but the point is…I mean, LISTEN…he’s such an underrated axe-man when it comes right down to it.  While a part can often be duplicated to a degree by playing the same notes from player to player – when you play with the passion & tone that Trey Wonder does, it’s impossible to copy it 100%.

He’s got all kinds of awesome stuff out there for ya now – and the video for “Eating Me Alive” should be out there for ya by tomorrow – and after that…well…you know what this dude is like.  Trey will certainly have no problem keepin’ y’all entertained in 2021 I’m sure…he might sound a bit more mellowed out in a few of these new songs, but make no mistake, when it comes to his work ethic in the world of making music, he’s always seriously fired-up & workin’ round the clock, and if we know anything about Mr. Wonder, he’s likely already got a whole bunch more already planned in the works to release this year.

Find out more about Trey Wonder at his official homepage at:  https://treywonder.com