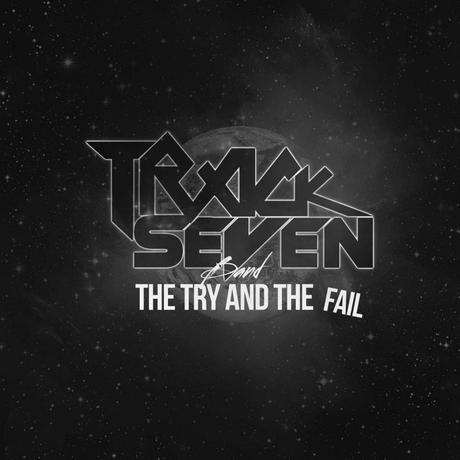 TrackSevenBand – The Try And The Fail – EP Review

I feel like I don’t get to hear music like this often enough…right now, TrackSevenBand is completely hitting the spot for me.  With a blend of solid instrumentation, real ideas in the writing and professional execution – the multilayered TrackSevenBand is kicking out the smooth-jams that range through the different genres music has to offer.  Based in Hip-Hop perhaps…but there’s so many elements of Soul, R&B, Pop, Funk, Jazz…the EP might be called The Try And The Fail, but TrackSevenBand proves that if you’re willing to experiment with your sound and test your own creativity in music, you come out winning every time.

TrackSevenBand puts themselves in good position quickly with “The Message.”  With several elements in the instrumentation & performances standing out immediately, TrackSevenBand begins to make an instant play to keep your attention throughout the next three-minutes or so.  Won’t be tough to end up on their side – the incredible bass-lines of “The Message” and the funk that Tony Torres adds would be enough to pull in most people alone, but they’ve got much more in-store for ya.  Frontman/Vocalist CO$T busts out a smooth & inviting sound to his rhythm & flow…the rap is confident, bold and empowered…the lyrics reveal that we’ve got a group of leaders here in TrackSevenBand, socially-conscious words & knowledge, written from an intensely personal perspective.  Good breakdown, solid bring-back…but subtle…I like how they’ve ended this first cut a lot…love the simple but effective guitar solo from Silver Fret at the end.

Shout out to Eugene Rivera on the drums…he’s been seriously impressive throughout every moment so far and remains that way throughout the entire record.  From the opening rolls into “The Message” and right into what you’ll hear him pull off with incredible fills and perfect-timing on “Today” – can’t deny this guy is one of the better drummers I’ve heard on a record this year for certain.  Expert hands on the drum-kit here…these guys in TrackSevenBand mind you, are all masters of their own corners…together, listening to “Today” – I’m starting to think they might just be unstoppable.  The skills of CO$T on the microphone will blow your mind…not only is what he saying extremely beneficial to hear – the speed and precision, passion and energy all play a huge role in his performance.  Definitely the exact kind of frontman you want to have up at the front of your band on the mic…sounds like the quintessential entertainer.  Great style, great delivery.  The hooks all work strongly on “Today” – and while led by its beat and vocals, the subtle supporting layers of guitar, bass and keys really keep this track moving in all the right directions.  Love how quickly the words come out and how much knowledge and passion are put into them…that’s the real magic of “Today” – and you can easily hear just how well this would work out in a live-setting.

Almost like a combination of Jay-Z and Jon Batiste And Stay Human…there’s a ton of talent both at the mic and right beside it.  I thought we were already off to a great start here on The Try And The Fail – and then “Go Get It” happens…and TrackSevenBand finds another innovative way to outdo themselves yet again.  With a smooth bass-drop into an incredible verse from CO$T and a beautiful guitar-line contrasting the deep-bass low-end…the verse is intense…and the chorus is a powerful release.  “Go Get It” narrates the struggle…the daily grind and how it can become the ENTIRE grind, if we let it – but the point of “Go Get It” is to be that reminder that it’s our own choice…and if we’re going to really break-free of it all, we gotta “Go Get It.”  From the theme to the execution of the entire idea, TrackSevenBand has got this third-track tightly nailed down…lot of respect for what’s being said here.  CO$T doesn’t front – he speaks it truthfully…and that personal touch on the lyrics makes all the difference – you can hear the passion in his words and just how important they are to communicate.  Shout-out to Omar Osorio on the keyboards…I think some of the additions he’s made on this cut keep it all tied together solidly unified – and I think the guitar-work from Silver Fret is absolutely incredible.  Like a version of Steve Vai in a solo-moment…he chooses his notes so expressively, allowing the guitar to really speak like the vocals themselves do.  With so much happening overtop of them…you might not even notice how continuous the guitar actually is – but it’s right there and playing into the melody perfectly the whole time.  Can’t say enough about them all…Tony Torres on the bass, my man Eugene on the drums…I mean…it ALL works so incredibly well on “Go Get It” – so much personality, style and real passion on display you can’t help but listen to this track…and I think that’s beyond-great because everyone out there should seriously absorb this story, be inspired by it – and go after their own dreams with the same vibrant enthusiasm. 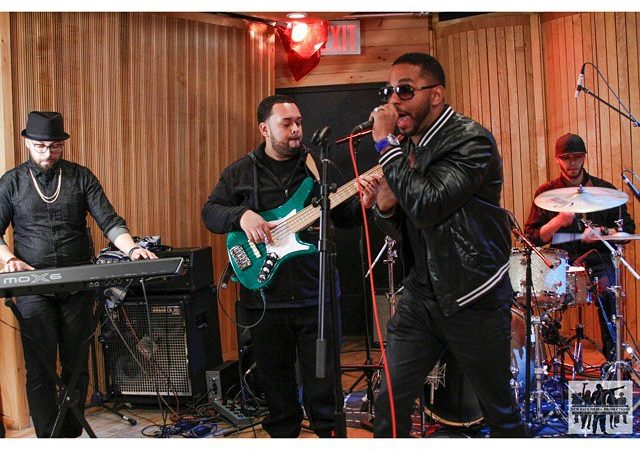 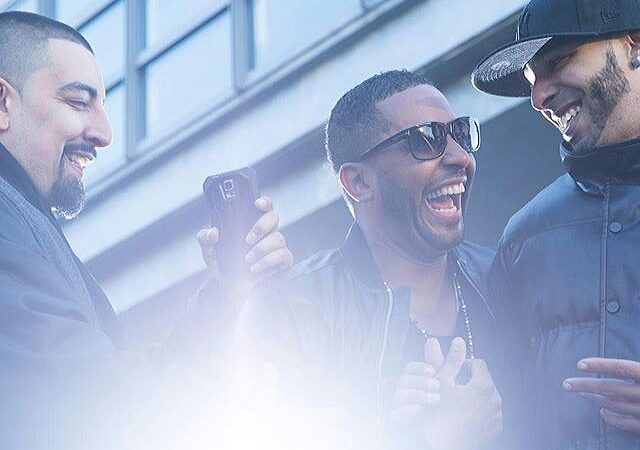 “I See You Boy” is a truly interesting track.  The music is a little more spaced-out and minimal here on this cut, but that also seems to work in favor of TrackSevenBand as they switch between the low-key verse and amped-up chorus.  Has a real hypnotic and rhythmic set of qualities to this track that makes “I See You Boy” have a real pulse to it…great movement in this track that really allows a lot of freedom for CO$T to narrate his story in detail.  Almost like a hip-hop version of Body Count…you can hear the comparisons to CO$T and a young & hungry Ice-T…the slammin’ way the chorus hits is also very similar…if TrackSevenBand was a bit angrier and chose to go in a hardcore direction and dropped the bounce & funk out of their music…you’d probably end up with something quite similar.  That being said…I’d put my money on CO$T being the man to really bring the melody and passion to the words like he does here on “I See You Boy.”

If anything…”Die” becomes a little mixed in its ambition.  I think that…as far as the composition goes, it’s top-shelf stuff…definitely a lot of skill in the assembly here.  As far as what the people can latch onto…there’s not a whole lot, despite how much is happening in the actual instrumentation of “Die.”  Could be an issue of placement…could be that after the minimal approach to “I See You Boy” that “Die” sounds more jumbled in its structure.  I dig it as a stand-alone composition…I think there’s validity to the writing and sharp dynamics that make this track a lot more like a journey, or even watching a film with the imagery through the words than it is like listening to a typical song.  It’s a lot more progressive in style than anything we’ve heard on this EP so far…I think it’s the kind of song that a fan is going to appreciate and love, but not exactly the song to pull the people in.  The hooks are tough to find in that verse…and by the time that the chorus comes around, it may be too late for most people…there’s a risk being taken on “Die” that the other tracks don’t take in the writing, which may or may-not pay off for TrackSevenBand. 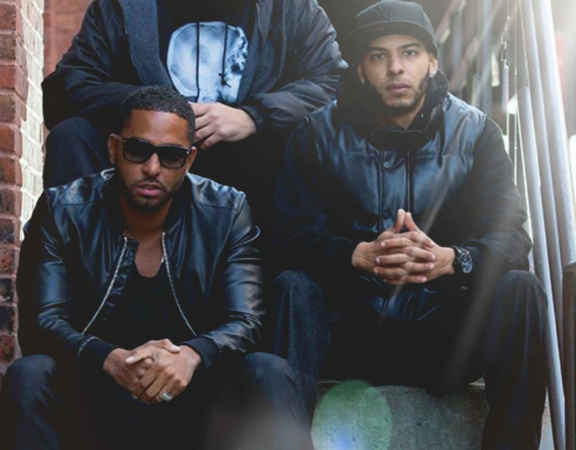 “Doubt Me” has some solid ideas but also a little uneven in a few ways.  Felt the keys were up a little too brightly in the mix and overshadowed the rest of the mix a bit…and I felt like the chorus was kind of a coin flip of sorts.  On the one hand, it represents that freedom in music that I love…on the other hand, not so sure about the final tone added into the vocals…a little grating but close enough to communicate the idea.  The opening verse probably ended up being my favorite part of the track…takes you through the strong first-minute…ahhh…truthfully, both verses really stand-out…or peek out rather, from behind the sparkling keyboard & its repetitive melody.  I like the idea and the sound of the song…just think this was one cut that could have benefitted from a slightly different mix.

And for what it’s worth, I’m sure it’s something they’ve thought about themselves by now.  When you compare the mix on “Doubt Me” to the title-track “The Try And The Fail” at the end of the record and how effective Omar’s keys are still even at a much more muted-level – I think it’s hard to argue where the right place might be for them in mix when you hear these two cuts back-to-back like this.  It’s a stellar performance from him…and to me, stands out a little bit more to me like this at a volume deep in the mix of “The Try And The Fail.”  The verse is once again extremely tight…great guitar tones, groovin’ bass and crisp drum-sounds…CO$T once again kills it from the lefts to the rights with a precision, on-point performance.  The chorus…not too sure of…I felt like it was good again in the idea…but almost done with half the energy that the words required from it.  Listening to the energy, confidence and tone in the verse…I mean, is it wrong to want that same kind of approach to the chorus as well?  It might be…that might be on me and the way that I hear music…but I feel like TrackSevenBand is selling themselves short a little bit with rushed writing or performances hindering the choruses somewhat.  Which is like, maddening in a way…the potential for this band is greater than most out there…and a few more days spent on finding that solid hook or finding that connection to the words…a few more days in the studio, and songs like “The Try And The Fail” go from good to great easily with a band like TrackSevenBand’s talent.

So…I think when this band puts their minds to it, they’re in position to take on and rival the best of the best…but there’s a lot going in in the music of TrackSevenBand, and they’ve gotta keep it sharp at every corner to be able to really compete.  Easily one of the most capable bands I’ve heard over the past couple years – I’d assume that TrackSevenBand is going to go on and find their writing evolves to amazing places; The Try And The Fail is a great start – there are some real wins on this EP already.  A band that runs as deep as TrackSevenBand is going to continue to innovate and create amazing art & music over time – this much I know for sure; even with a few slight stumbles here on this record, I’d still have their next record at the top of my list to listen to.  Because I’m positive there’s something here…I think the band shows tremendous focus in the first half of this record…maybe they wander a bit towards the end of The Try And The Fail…but at the end of the day, I have a strong feeling these guys are on the right path towards something even more fantastic with their music.

Find out more about TrackSevenBand from their official pages at: 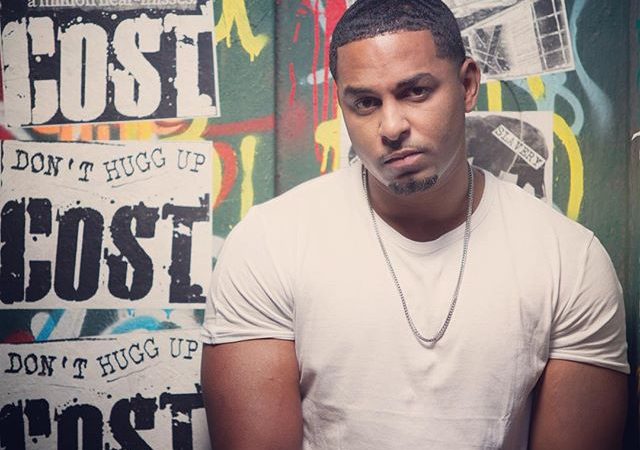 Tags: EP sleepingbagstudios The Try And The Fail TrackSevenBand