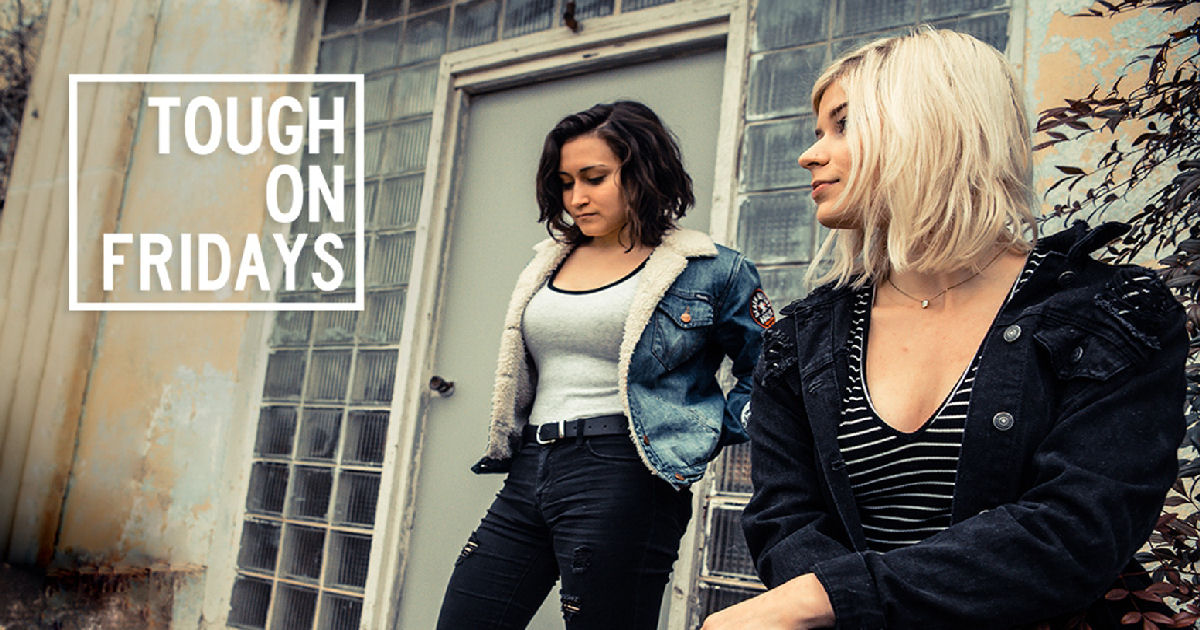 What are these punks up to now?

The damsels of distortion, Katie and Caleigh of Tough On Fridays, have been making truly impressive moves with their music & career over this past year-or-so since we first started listening to their stuff last July with their single “The Waywards.”  Part of those moves are pure passion for sure…the other parts are all SUPPLY & DEMAND baby, yeah!  No doubt they love making music together…but you gotta wonder just how much they’re responding to the massive buzz that continues to surround these two minstrels of mayhem.  At this point, if they didn’t keep those tunes of theirs coming out so fast & furiously, they’d be bound to feel the heat from the public wondering when they’re getting some MORE of what they so clearly love, mobbing them immediately after shows to the point where they’d have to run like The Beatles to their rockstar limousines awaiting with their bowlful of M&Ms (Green ones ONLY – no exceptions!) and rider full of premium booze after every show.  Imagine the horror…the horror!

Thankfully, they haven’t allowed that to be a concern to this point with a consistent & steady stream of killer singles coming out over this past year that have thrilled, excited, been turned way the fuck up, and been sent raging through our speakers.  They’re downright ambassadors of continual audio entertainment.  AND…as far as getting MORE of what you love from Tough On Fridays, not only do we have this shiny new single “Open My Mind” – but word on the street is their new Lost & Found EP is out NOW!  Basically, if you’re doing the math like I am…I don’t think Katie or Caleigh have time for anything else BUT making music, do they?  They literally ALWAYS seem to have something new coming out!  Which is AWESOME of course…I certainly ain’t complaining.  I’ve been riding on their bandwagon for a while now and I’ve got no intentions of giving up my seat any time soon.  I’ll share it with ya, but that’s about it.

“Open My Mind” finds the dynamic duo in fine form for your summer, kicking up the energy immediately with their signature combination of gripping melodies & vocals turned up to eleven from moment one.  If I haven’t said it in the past, I should have – these ladies will supply you with some of the best vocals you’ll hear on the microphone in anything-Rock out there right now – the breathless way that “Open My Mind” is sung is a brilliant fit.  With the energy you find rampaging & surging through the music, having the lead-vocals come out giving it everything they got to give you that confidence, strength, and tone that Tough On Fridays does so exceptionally well to match the scathing pace of the song SHOULD leave a singer damn near spent by the end!  You can completely hear just how much is being put into the huge notes and strong tones of “Open My Mind” – and the level of expression & true freedom of ROCK you’ll find in the spirit of the way they play this single will 100% impress ya.  Everything from the rumble of the bass to the storming of the drums, the powerful chords of the guitars and the stunning vocals in both the lead & background – Tough On Fridays reveal they’re long past the point of making rookie mistakes, these badasses are fully pro now, without question.  You can hear it through the relentlessly passionate attack they approach their music with – they’re not fuckin’ around y’all; these two are flawlessly dialed right into their sound at this point of their career already – and as a result, songs like “Open My Mind” end up becoming like a version of the band we already loved, but even further refined & evolved.  Don’t confuse that for selling out homies…we’re not talking about anything CLOSE to that – we’re talking about genuinely pushing forward at all times, like the music is fucking life or death to create – because for some of us, it IS – that artistic evolution is essential.  I suspect it’s like that for Katie & Caliegh…they clearly put their all into every move they make, every note they sing, every note they play – Tough On Fridays is still Punk AF in every way and will always harbor that reckless style & angsty chip on their shoulders, but it’s equally clear from songs like “Open My Mind” that all their efforts are paying off…they’re sounding completely next-level and professionally READY for it.  So don’t go confusing Punk with slackin’ – don’t go thinking that refinement is selling out either – being invested in your music and excited about hearing it grow, evolve, and expand is the way things SHOULD be…and the way I’d imagine things ARE inside of Tough On Fridays.  They continue to kick all the ass with high-energy melody and savagely gripping pace on “Open My Mind,” revealing the charisma they share together is as electrifying as ever, if not more-so now.  There’s no denying that Tough On Fridays is still completely on the way up and still gaining speed…the people are loving what they create, and rightly so.  “Open My Mind” is sure to satisfy’em all…and then some.

Their new EP called Lost & Found is out & available now!  Make sure to stay up to-date on the details and find out what they had for breakfast this morning by checking out the official Tough On Fridays website at:  https://toughonfridays.com