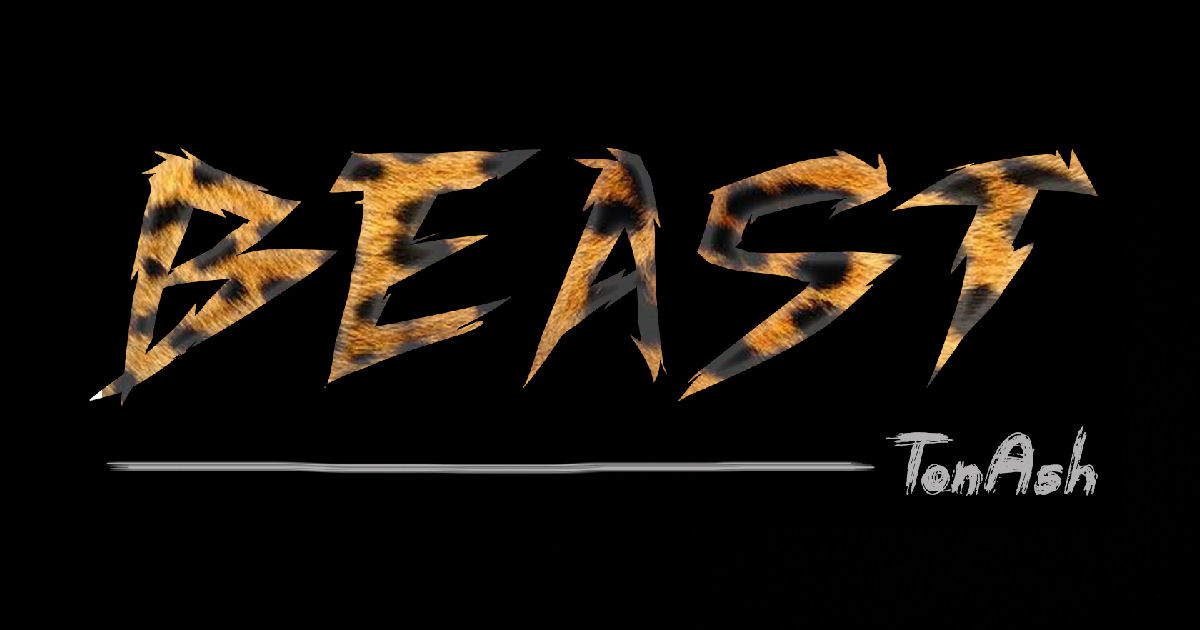 A “Beast” on one cut and a Lion on the other…sounds “Crazy” right?  Let’s do this thing.

He’s a man that nearly needs no introduction on our pages at this point, artist TonAsh has been making moves on our pages all year long in 2019 – though technically, this is the first time we’ve had him here in review!  We’ve featured videos & audio-posts of all kinds as he’s dropped new singles online…you can find posts with “Wanna Be Rich,” “How It Go,” and his “I Yi Remix” featuring Bodine Victoria & Chase Fernander all up on these pages – and I highly recommend that ya do if you haven’t checked it all out already – TonAsh has been crushing this year with wild new material and it’s all worth your time, 100%.

“Beast” flexes club-worthy sound right from the drop.  A cut produced by Jacob Lethal Beats, the stage is set for the man to do his thang and lay it down on the m-i-c, which TonAsh nails with confidence, rolling through the bars with serious presence and taking on the hooks, no problemo.  Showing that versatile style & sound that proves he can audibly do it all, TonAsh gets downright dirty on “Beast,” detailing wild nights between the sheets and tellin’ us about the various freaks he’s running into while out there on the prowl for poontang.  I mean…if I’m reading between the lines right here…then a “Beast” is a damn good thing isn’t it?  A “Beast” being someone that can work the pole perfectly…and not the one in the club if you catch my drift…maybe both, but you get where I’m goin’ with all this – “Beast” is bout fuckin’ for a large majority of the theme here.  It’s all about being the best at what you do…you feel me?  If you’re a master of the m-i-c, you’re a “Beast” – or if fuckin’ is your thang, then be a “Beast” at that!  Excel at your goals and dreams, whatever they may be, and don’t let anyone stop ya for reachin’em.

For real though, lots goin’ right for TonAsh on “Beast” – the rubbery & bouncy bass-lines give him the opportunity to spring-off the beat and really make an impact with the words he’s spittin.’  And of course TonAsh is bringin’ it when it comes to the vocals…no concerns there – I couldn’t tell ya what I liked more between the verses & choruses of this cut, which always tells ya that a track has genuine balance to it.  I mean on one hand, you’ve got the completely impressive flow, on-beat precision, and complex strings of words comin’ at ya full-speed in the verses that flex verbal finesse at ya – and on the other hand, he’s got a memorable hook for the chorus, punctuated in full with the chant of “Beast” comin’ at the end of it.  Dunno what else to tell ya folks – TonAsh hasn’t let us down once this year and it sure don’t seem like he’s about to start now.  There are all kinds of lines on “Beast” that’ll make you raise an eyebrow or two when you hear the explicit content he’s hittin’ ya with, but just as many instances where he’ll put together a full string of thoughts that show he’s putting genuine thought into how to make his words connect and these lines land in a way that the people will actually hear’em.  Listen to him duck & weave like a prizefighter with his words & the moves he makes alongside the music…he’s a master of the game.

If I’m being honest though…it’s in that moment in the space between the end of a song like “Beast” and the immediate appeal of “Crazy” as it starts up, that pretty much shines a spotlight on the difference between what’s a really good song and what’s truly a single-worthy tune.  Like…if this cut doesn’t reach your playlists & stereos this summer, you’re only hurting yourselves y’all…and I don’t advise sleepin’ on “Crazy” whatsoever, it’s just not a good move…and your ears deserve something this stylistic & smooth.  Best way I can put it perhaps, is that I’ve enjoyed TonAsh’s music from the beginning of this year since I first climbed onto his bandwagon back in February…and there’s no question that “Crazy” is probably the most accessible cut I’ve heard come out of his catalog so far.  It’s more than a relevant sound – it’s next-level & beyond that…tracks like “Crazy” are what the people out there are really looking for, even if they don’t know it yet.  It takes all of like, less than twenty-seconds to be hooked on this single, straight-up…if the vocals don’t immediately grab ya (and they will), then it’ll be the beat/bass combo shortly afterwards, or the incredibly chilled-out & laidback tones from the guitar – either way, you won’t get to a full thirty-seconds on “Crazy” without it already securing your full approval.  It’s the kind of cut that glides along so damn smoothly right from the drop, that you relax as a listener…it’s the kind of professional control where you can instantly be comfortable in knowing that everything you’re about to hear completely fits the vibe & suits the song – and it absolutely does on “Crazy.”  Huge props to the vocals on this cut…from the lead to the background, the style on the mic is as stunning as it gets, which at many points along the way through the breakdowns or moments where the music gets smaller, is totally key…those vocals needed to rise to the occasion here, and that’s exactly what you’ll find happenin’ all throughout this single-worthy cut.  Props to Judah Tha Lion, props to Pacific Music on the production, props to Chase Fernander on the backing vocals…and of course to the main star of the show, TonAsh, for ultimately bringing this ensemble of talent together.  They should all be raising a glass and toastin’ up to what they’ve all pulled off on “Crazy” – it’s perfection of the modern-day vibe, it’s smooth & stylistic AF – it’s one of his greatest & easily one of the best singles of the year in the hybrid genre of Hip-Hop/Rap/R&B he’s been making a name for himself in, straight-up.  Massively impressed with this cut – “Crazy” might appear to be as chill as it gets, but make no mistake, this single is hotter than your summer is ready for.