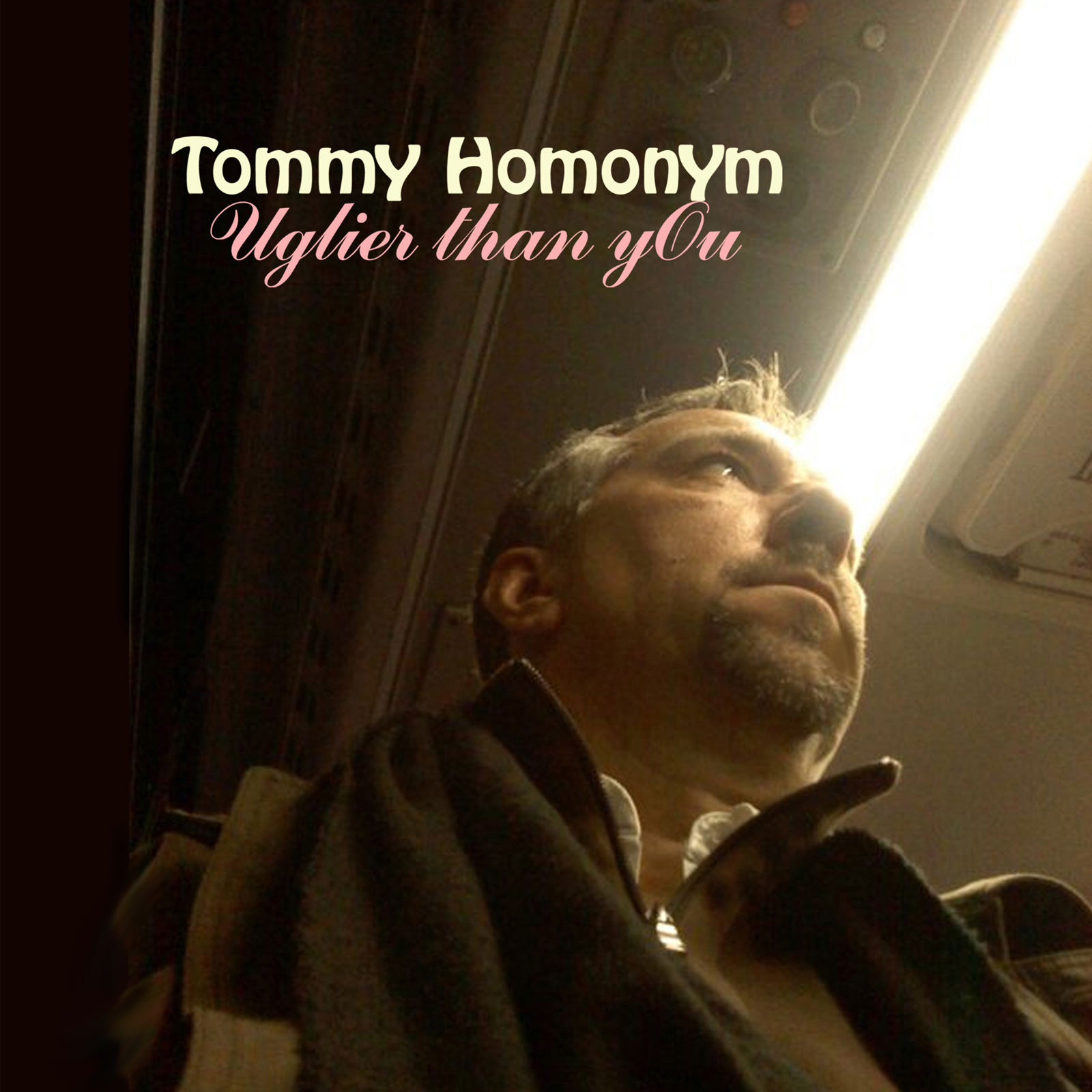 Wow Tommy did you EVER catch me on a strange day to do this review! I’ve spent the day with Vancouver hard rock band FEY and to say that your music is a switch in sound and style would have me surely winning the prize for understatement of the year! But I both can and do listen to music of all genres – and now that the ringing in my head has stopped from the mind-blowing performance just put forth by Fey live in our studio, well…I think enough time has passed for me – time to switch genres and dive into this new album from Tommy Homonym! Who’s with me!

What instantly struck me from my first moment listening was the “throwback” element Tommy’s music has in its production. It was just like throwing on an album in the heyday of Bowie, The Turtles and Strawberry Alarm Clock…it has that same warmth in the sound…that same comfort. Through the vocals Tommy actually finds himself drifting in and out of a younger Bowie, especially in the first track “What’s There To Eat?” Oddly (But thankfully) that title is also reminding me that it’s 8:10pm and I still haven’t had breakfast…be right back…

What I like most about each track on this album is the dream-like atmosphere they all have. It sounds distant…like a great memory recalled to all of your senses…something you can remember in your mind like you’ve been right there WITH Tommy before. Atmosphere is not always an easy thing to create, nor is an identifiable sound as strong as Tommy’s. The combination of his style and production make it no question to the listener as to who they’re listening to – and after multiple listens I feel like I too could now pick a Tommy Homonym track out of a line-up of songs with no hesitation and not be wrong one time in ten.

If anything – for once I have an album here that is almost TOO consistent! Many of the songs pulse along to a similar beat and pattern, creating an overall experience into the music of Tommy Homonym that really feels like it all belongs together. Meeting somewhere between Paul Simon and that David Bowie sound, Tommy is definitely doing something different than anything else you can hear out there right now.

With that, of course comes the challenge of going against the grain. It can be tough when the musical taste of the world has shifted past, or has yet to shift to a certain sound. And though Tommy might find himself in either of these boats at times – there’s still enough here on the fringe to possibly attract fans of more current acts like Jesus And Mary Chain, Mazzy Star or maybe even Massive Attack. “A Kind Of Freedom” actually reminds me a lot of the feeling I get from certain songs on Protection, one of the first albums from Massive Attack, way back when they had that jazzier, smokier lounge feeling to their music.

Being a huge fan of a great pop hook – check out the Supertramp-ish track from Uglier Than You, just past the middle, called “A Taste Of Your Flavor.” It has this cheeky little keyboard line that runs through the background perfectly against this highlight on the album. Tommy comes to life as he sings out “You’ve kept me waiting too long,” with the passion of a man who’s time to make his musical stand right here and right now.

I keep coming back to this whole idea of WHERE I might find Tommy’s music just simply playing in the background and I still can’t think of where that might be. Life seems to have become nearly too busy in today’s internet age to take a proper chill-out and listen to an album like Tommy Homonym has put out here – so there’s still much battle to be won out there in terms of getting this music to the masses.

Thankfully – that can’t be the reason any of us really do this. It really does take a certain type of extremely cold and robotic person to only want the achievement of fame through music. Most of us out there all want the same thing: to share, to communicate with each other. To SAY something…but more importantly, to be HEARD.

The album closes on another strong track from Uglier Than You called “Undone.” I’m a big fan of this track and how it really shows the best side of what Tommy does. That atmosphere is definitely there. The haunting narrative full of imagery you can see in your mind just from listening to the words. In a very heartfelt performance to end this album, it almost sounds like this particular track meant 10% more to Tommy personally through the lyrics than the rest as he delivers sorrowful lines with strands of hope woven in between in an extremely genuine tone.

I don’t think that Tommy is out there making music for the masses; I don’t think he even gives it a second thought – nor SHOULD he. He has music you can clearly hear he has dedicated himself to and believes in. Masses or not – music is truly born from that need to express and communicate, and in this business sometimes all it takes is one person to listen with an honest ear to make it all worthwhile.

And for what it’s worth, Tommy my friend…I’m listening.