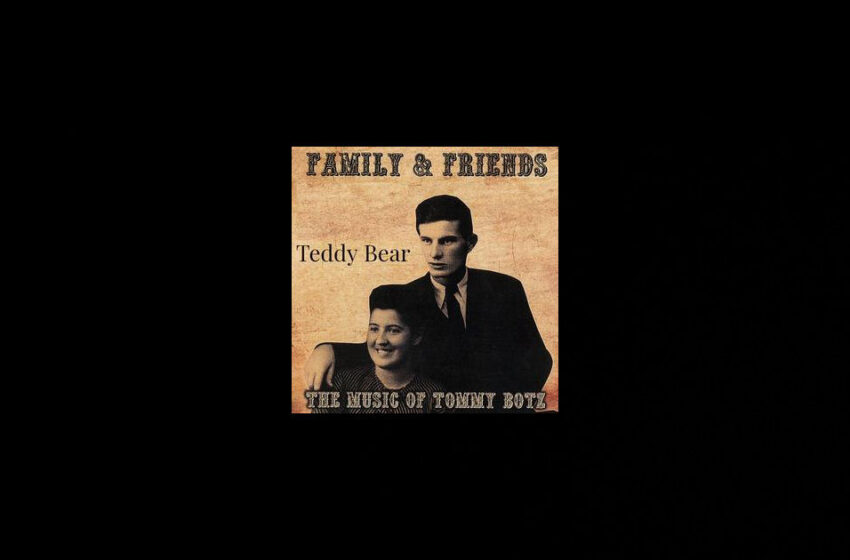 Not every song we’re gonna click on is gonna be the happiest song you’re gonna hear this year – and this single by Tommy Botz certainly ain’t.  No denying either that it’s a really well-written tune…it’s not gonna pull any punches that much I can tell ya…it’s tough to listen to a tribute song for the victims & families of Sandy Hook and hear actual children’s voices & laughter threaded into the background.  It certainly makes the point hit home and its theme connect, no doubt about that…but yeah, tough stuff.

Fitting somewhere in between the realms of a classic Country vibe and Adult Contemporary, Tommy’s single “Teddy Bear” is quite the fearless tune despite how gentle & inviting the music may seem; it’s really not a song for the faint of heart whatsoever, but it is a song that everyone should hear.  Quite the story behind it too as I understand it from the notes I’ve got here in front of me…in fact, this is the first time I can recall a song ever having come my way that was written entirely from jail.  Word on the street is that Tommy wrote this up for a fellow inmate of the Ohio state penitentiary…no details on what specifically put him there, but there’s scattered information about how his drinking got out of control for more than a little while & had him bouncing & in outta the greybar hotel.  These days long behind him now, he’s celebrating a milestone of 15+ years sober, and a complete second-life as a songwriter.  All of this stuff is great to hear, and also prove he’s been on the right track for some time now – and he’s in the process of taking the 200+ songs he’s been so busy writing over the years into the studio to get recorded.  As “Teddy Bear” will prove to ya – that’s a good move on his part – if songs like this have been sitting on the shelf, it’s time to get’em on out there Mr. Tommy Botz…the man’s got talent and he’s unafraid to put a ton of weight into his songwriting, whether or not that’ll induce tears from everyone out there listening in the process.

What’s interesting to me is that this is considered a demo?!?

To that, I ask by what measure & standard would we be applying there Mr. Botz?  Because I can tell ya this with full confidence – replacing Logan Wells would be an irreparable mistake, and one I sincerely hope doesn’t get made…I don’t think you could get a better performance into this song than what you’ll find she brings to it with her remarkable voice.  Could “Teddy Bear” have a shinier mix overall in the production?  Maybe?  Again…maybe I’m all warped at this point from having spent so long at the heart of the independent music-scene & listening to tunes from all levels of experience & skillsets out there, but I’m really not hearing much if anything at all I’d even think to change, or ever want to.  Logan has put her heart & soul through the microphone in singing this song, and connects with every syllable that Tommy’s written with insightful instincts on how to approach this tender tune with grace when it needs to be gentle, and fierce boldness in her tone when that’s called for through the words as well.  As I’ve said a millions times on these pages of ours, we can spend our lives making one single song if we’re not too careful about it…to think this is gonna somehow come out better than we hear here already is quite the lofty goal if I’m being truthful with ya, but that’s a testament to how good this demo comes out & the performances put in by all involved.  The solos come out shining, you still get to the core of the ingredients like the piano & violin & bass making their stellar contributions to this tune along the way, and Logan is non-stop awesomeness on the microphone, emulating the classic Country vibe as spot-on as you could possibly hope to hear.  The imagery in Tommy’s words is exceptionally vivid on its own, but make no mistake y’all – Wells brings every one of’em to their maximum potential with the way she sings “Teddy Bear” and I truly can’t fathom how someone else could ever somehow one-up her performance.

The mix of sweetness & sorrow is masterfully laced within the writing and extremely tangible to our ears – you can’t miss just how sad this song really becomes through the words & vocals, but you can also take some comfort in the sweetness that the music provides in solace.  As heartbreaking as it is entertaining if you ask me – and I’ve got nothing but love for the way Tommy writes his songs; it’s both respectful of the scenario, situation, and the highly fragile emotions that would come with it – and at the same time, it’s also remarkably bold & unfiltered…unafraid to really make you consider each and every word you’ll hear and WHY you’re hearing them to begin with.  It’s devastating really; that’s the facts – but it’s also the intended design.  A song like “Teddy Bear” is supposed to hit ya where it hurts, and there’s no question about whether or not it succeeds in that regard…it’s a genuine tearjerker, 100%.

Demo or not, here he comes.  At least kinda?  The song itself dates back about seven years from what I can find online or see at that there Soundcloud link above.  The case remains the same though…fans of classic Country will really appreciate this tune…fans of real songwriting will as well…and of course, those affected by the tragedy of Sandy Hook will certainly connect to the well-meaning sentiment of this single & its inducing catharsis.  Hopefully this helps continue the healing for all those folks that suffered through the incident, or anyone out there that has lost a young loved one far too soon for that matter…the folks that are still trying to somehow process what they can in the aftermath every day.  Tommy Botz’s “Teddy Bear” is filled with powerful emotion, true purpose, and remarkably good intentions – and while none of these great things about it will make this song even one iota easier to experience, it’s definitely a song that expresses what so many people really need to hear.

Find out more about Tommy Botz at his official site at:  https://adrunksdreamcomestrue.com