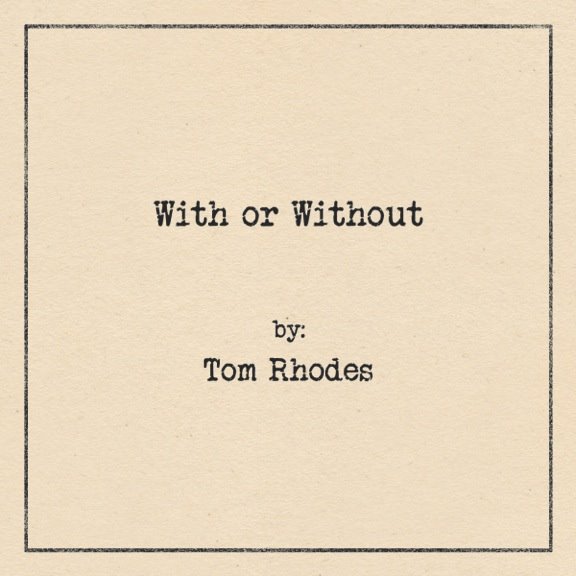 Tom Rhodes – With Or Without – Album Review

You can tell what a professional Tom Rhodes is from the minute that With Or Without begins – and as the album plays that approach never wavers. If you’re a fan of the pure & true song-writer…music with real soul involved in its making…you’re going to want to jam some Tom Rhodes on your stereo. And if you’re anything like me, you might just not want to turn this off for a very long time. Tom is the realest of deals…and his authenticity shines through these songs that play like legends being told around the fire as the hour gets late and the moon becomes bright and full as the stars come out…

“Cold And Deep” plays with a beautiful stomp and roll through a folk/rock tune that is certainly leaning more heavily towards the rock side once this song really begins to take flight. What a tremendous opening to an album – there’s such an excellent rhythm & groove to this first song that you can’t help but fall right into the sounds of Tom Rhodes. His voice sounds PERFECT for this music, assisted in-full by some of the most awesome backing vocals I’ve heard this year – truly great ideas displayed in the background every bit as much as what’s going on up-front. It seems Rhodes has got this party off on the right note…”Cold And Deep” is as excellent of an opening-tune and beginning to a new experience in music as one could possibly hope for.

Of course, from there…we always secretly hope that the music will somehow continue to raise the bar…and that can be pretty tricky after opening with a song as strong as “Cold And Deep.” But although the energy of the music takes a radical departure into much softer and intimate territory than the opening tune of With Or Without, as soon as “Heartland” started I knew we were REALLY starting to uncover the diverse song-writer that lives inside Tom. He completely raises that bar with the second tune…and it takes more than halfway through the song but I FINALLY heard the comparisons I’d make to this guy…I think they become unmistakable through “Heartland.” Tom Rhodes is in fact, very similar to the quality, song-writing and style of David Gray. There are points in “Heartland” that also remind me of classic-rock artist David Baerwald as well…point being, this guy is keeping some extremely excellent company when it comes to peers in song-writing. “Heartland” is about as freakin’ gorgeous as a song can get…everything from the slight wind sounds to the guitars, and especially the vocals…just sweet-perfection the entire way through.

Definitely fortunate to have run across a couple of truly album-defining title-tracks in this past week – if you remember, it wasn’t so long ago that we stumbled onto Nick Peay’s “Sobering” that blew our minds open from the EP of the same name, and now we’re onto “With Or Without” – a song performed so passionately it screams out its worthiness of the album’s crown. Against some incredible-sounding drums and smooth bass-line, Tom sings with EVERYTHING he’s got…and in many spots, you can hear some of these notes and tones are JUST making their way out of him alive. I LOVE the way it sounds…it’s so fragile, but so ROCK at the same time…the way his voice breaks & cracks throughout “With Or Without” sounds like genuine passion recorded – I wouldn’t change a thing.

Lightening-up the mood a little with “Connection Of Minds,” you begin to realize that Tom seems to be incapable of hitting anything less than a complete homerun. This is an extremely solid tune; “Connection Of Minds” has a bright rhythm through the snappy bass, sparkling guitar sounds and drumbeats that keep a steady groove rumbling throughout this certified-hit. Adapting to his environment once again, Tom Rhodes seems to feed off the energy around him and find the perfect way to fit himself into these songs. There’s zero-evidence of a man writing only to his strengths here – already in just four songs we’ve wandered through much musical-terrain, texture and atmospheres…and Tom & his crew have delivered in-full, each and every time.

It’s important to note that With Or Without was actually listed as one of the best Americana albums of 2015…and was actually completely tracked in front of LIVE audiences over a four-day span. As IF there could be a more stunning detail…people – this is LIVE…this magic that you’re hearing on songs like “Ashley To Ash” is happening right in front of people’s very eyes. Closing my eyes…I can hear how amazing a moment like “Ashley To Ash” would have been…the instrumentation and harmonies on this track are purely beautiful. There is literally so much magic in the moments and music of this record it would take a tree’s worth of paper to list them all.

“It’s Still True” presents some of the greatest lyrics on the album along one of the sweetest-sentiments on With Or Without. Quaint, inviting, warm and maintaining the authenticity of Tom Rhodes’ style…I’d be lying if I didn’t say this one sounds maybe a little easier and comfortable for Tom, but I’d also be lying to you if I said it doesn’t still work entirely. As complete as any of the songs we’ve heard so far, maybe a little more laidback than some, “It’s Still True” makes for a pleasant moment in time and chilled-out moment in the energy. “Nobody’s Listening” takes that smoldering-ember of the energy and takes the spark into a full pop/funk blaze with a light-hearted sound contrasted against a tougher set of lyrics. Highlighting that we’re not always the unique and beautiful snowflakes we like to think we are, “Nobody’s Listening” is a smart track that uses the vocals set high-up to prove that, even IF “Nobody’s Listening” that Tom Rhodes and his band are going to keep on singing anyway.

Because they are ALL clearly making music because they LOVE it – and nothing is going to stop them – and I swear you can hear that on a song like “Dull Razor.” One of the stunning highlights on this album, I don’t know if there was a tune on With Or Without that made this combination of talent stand out more to me than this jazzy song. The melody’s essence really sneaks up on you in this song as they switch into one of the most memorable chorus-lines on this album – Tom delivers the emotion in a jaw-dropping performance. Much credit to the ‘meat & potatoes’ of the band – the drums, the bass, the guitars – they’ve ALL been incredible on this record and they continue to shine throughout “Dull Razor.” Still innovating his style & sound throughout the album, a trumpet pops into this song with a golden performance…LOVED the addition and it fit perfectly into “Dull Razor.”

There is so much versatility on this record it’s astounding how cohesive the overall sound came out. “Calling Out” recalls that David Gray-esque performance from Tom once again as this playful tune rings out with clarity, tone and a vibrant atmosphere full of love. Containing one of the highlight guitar-solos on the album…it’s short and sweet and brilliantly played. You’ll hear what I’m talking about with the versatility as the following tune “Dying Is Easy” starts into a more blues/R&B combination. Brilliant backing vocals once again support a unique and sincere performance from Tom. The contrasting sounds of this album…at least to me…SHOULD have made for some kind of jangled-up assembly…but the way that With Or Without flows is so freakin’ magical, smooth and completely flawless that Tom should give classes to future musicians on how to perfect the art of the album as a WHOLE. Seriously…this is a record I could leave on for days on end…and typically, no, it’s not really my normal thing. I’ve been known to go for months and months into the world of any genre…I could spend an entire year on this record alone.

I mean…are you LISTENING to “Moses” right now? Cause if you are, you know what I’m talking about. Tom and the band create an absolute epic here. Haunting guitar sounds, this song has a real intensity to it…a slow-burning masterpiece. Maybe those aren’t even guitar sounds…maybe that’s an electric violin? I have NO IDEA – but it’s freakin’ brilliant! No…wait…hmmm…okay, I’m going with guitar…but you’ll hear why it’s confusing & equally amazing as to what’s making those notes bend and wind around the intense drum-rhythm and low-end beat that drives “Moses” through the verse before it brightens at the chorus. A real journey into atmosphere that’s as thick as morning-fog – “Moses” speeds along like a rhythmic locomotive at full speed.

Now…I KNOW what you’re thinking…Tom HAS to somehow start dropping the ball at some point right? This perfection couldn’t possibly go on throughout the ENTIRE album could it? Do people still make albums like that anymore?

Tom Rhodes is one of the best gems I think we’ve uncovered here at sleepingbagstudios, and if With Or Without didn’t somehow make my top-ten list into this year’s running for ‘best new sound’ we’ve found this year, I’d be shocked and amazed and obviously very happy as well for finding a mind-blowing amount of great music that would somehow bump this from the list…but you get what I mean…this album is a virtual lock to be in that list this year – be ready to vote readers!

Because if you listen to “Bread And Roses” I think you’ll hear every reason why Tom Rhodes belongs not only at the top of that list, but at the top of yours as well. The way the vocals layer together in harmony on this song is time-stopping-kind-of-stunning…this is one of those real moments in time that can’t possibly be duplicated. To think that at song twelve on the record, Tom has kept us completely captivated through his charm and charisma up front…and this is a Grammy-worthy performance on “Bread And Roses.” Absolutely, 100% beautiful from the moment it starts to its end.

If there’s ANY flaw whatsoever, it’s that Tom has given the world yet another song about “California” – but I can forgive him for that…at least this is an artist whose music I can support! Even though the world has been flooded with songs about this wonderful place…Tom has once again nailed what other can’t and delivered a sincere song that reflects his honest, personal feelings. It’s a subtle ending to an album that has featured highlight-moment after highlight-moment…With Or Without has been one of the most enjoyable listens I’ve literally had this year and contains an indescribable magic that only a purely authentic & sincere artist could ever attain. Quite simply put – what you’ll hear on this record are the moments that make music the best part of our lives – With Or Without is incredible.

Tags: Album sleepingbagstudios Tom Rhodes With Or Without