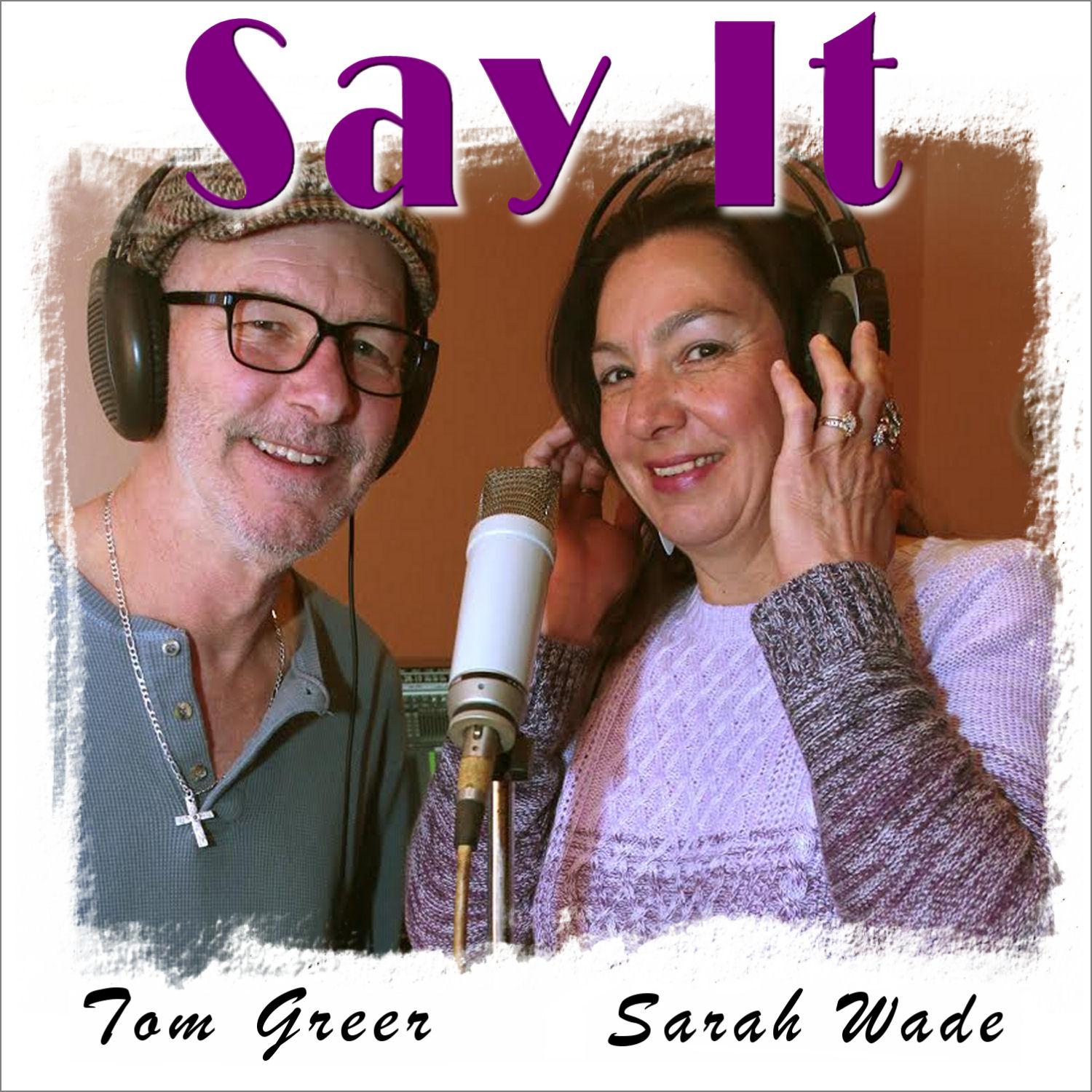 Wasn’t all that sure on what would be coming at me through the speakers on this one; the cover of the new single “Say It” features the two smiling faces that combined their talents to create it, Tom Greer & Sarah Wade…it’s an inoffensive & inviting first-impression before the music even begins…it looks safe!  At first glance, the cover had me assuming I’d be in for well-played, well-written & well-performed music & vocals…and so I pushed play…

Instantly an up-tempo, jazzy beat fires-up, followed immediately by some textured-tones and solo-notes from the guitar…great rubbery bass-lines and soft brass instruments that have solid movement and all combine to become excellent support in the rhythm section.  Now…I started with the tale of the cover-art for this single for a reason – what do you notice when you look at that picture?  Aside from the aforementioned smiling faces of course…you see a microphone right?  Indeed you do…as did I.  As the track rolled through nearly forty-seconds with what sounded like plenty of opportunity to jump into the fray and still no vocals…for a second there, I thought maybe I’d been completely mistaken altogether and this was just an instrumental project!

With the amount of imagination and innovation in the free-form jazz sound filling the atmosphere, the music is certainly entertaining, inviting and vibrant to listen to.  Shortly after the forty-second mark, right as my curiosity was peaking regarding the vocal-mystery, they begin.  Now…study that picture again…because that again, plays a role here.  Look at the positioning of that microphone.  To me…that looks like they did their best to represent an even-split…but being a hawk for symmetry, I noticed it was also tilted just slightly toward Sarah.  So…I mean…it COULD have been a mental-thing based on that picture…but that was definitely the voice I expected to hear.  When she began to sing with strong, bold tones full of expression…I thought to myself: ‘exactly what I was expecting and a perfect match to the music.’  And then the funniest thing happened…the punch-line in all these references and story behind the intense examination of the single’s cover finally revealed…and it has everything to do with somehow forgetting or not even thinking about the fact that, yes, of course, Tom might actually be singing as well.

So believe me when I say…at the 1:02 mark (exactly…I might never forget this moment) when Tom began to sing, I’d actually thought to myself for a moment ‘whoa now…that Sarah’s voice just went & dropped like, what, four octaves lower?’ until I realized this was a duet and it was actually Tom.  True story!  You never know what you’re in for when it comes to music and that’s proof enough for me that I can still be plenty surprised when it comes to what’s coming through the speakers here in the studio.

Now…when it comes to “Say It” and what I think about the actual song itself…I do really dig the music and avant-garde, free-spirited jazz sound that they’re working with here.  Vocal-wise…I felt like they both definitely have highlight moments to be proud of for sure, and a few spots that might benefit from some smoothing out.  Highlights for me included the beginning of Sarah’s performance…I really thought she came out sounding very strong…as far as Tom goes, I felt like his best moments were in the latter-half of the chorus.  Spots to maybe re-examine would be that beginning of Tom’s vocals & whether or not that’s the best tone to pair with the music…and for Sarah, I’d say to keep that tone and confidence going strong right to the very final moments of every breath…she goes for some impressive and tough notes and nearly conquers them all with exceptional beauty & grace to her performance and it’s only towards the three-minute mark that you can hear her slightly let-up for just a moment.  In combination, the two sound like they’re certainly having fun, they both have powerful range and tones and they’re not afraid to really let it out…which essentially, is a lot of what the song itself is about…you know, just going for it!  I appreciate that…and I think the attitude you hear in the words is really reflected in both their performances and in the music itself…it’s got a real uplifting power and sound to it.

Could be that I really just want to root for these two…what can I say, those smiling faces and this whole experience just truly brought a smile to my face.  The music remained the real star of the show for me when it came down to it on “Say It” – but I think both vocalists, Sarah AND Tom, did a solid job of bringing the essence of the ideas in the writing to life through their performances.  Love the percussion in this cut…love the subtleness of the brass…really loved the breakdown and instrumentation in & around the 2-min mark and the gentle bring-back of the music towards the final vocal run-throughs.  This duo has definitely put passion and expression on full-display here with the vibrant approach to the vocals & music of “Say It” and it’s led them to stellar results – no wonder they’re smiling!