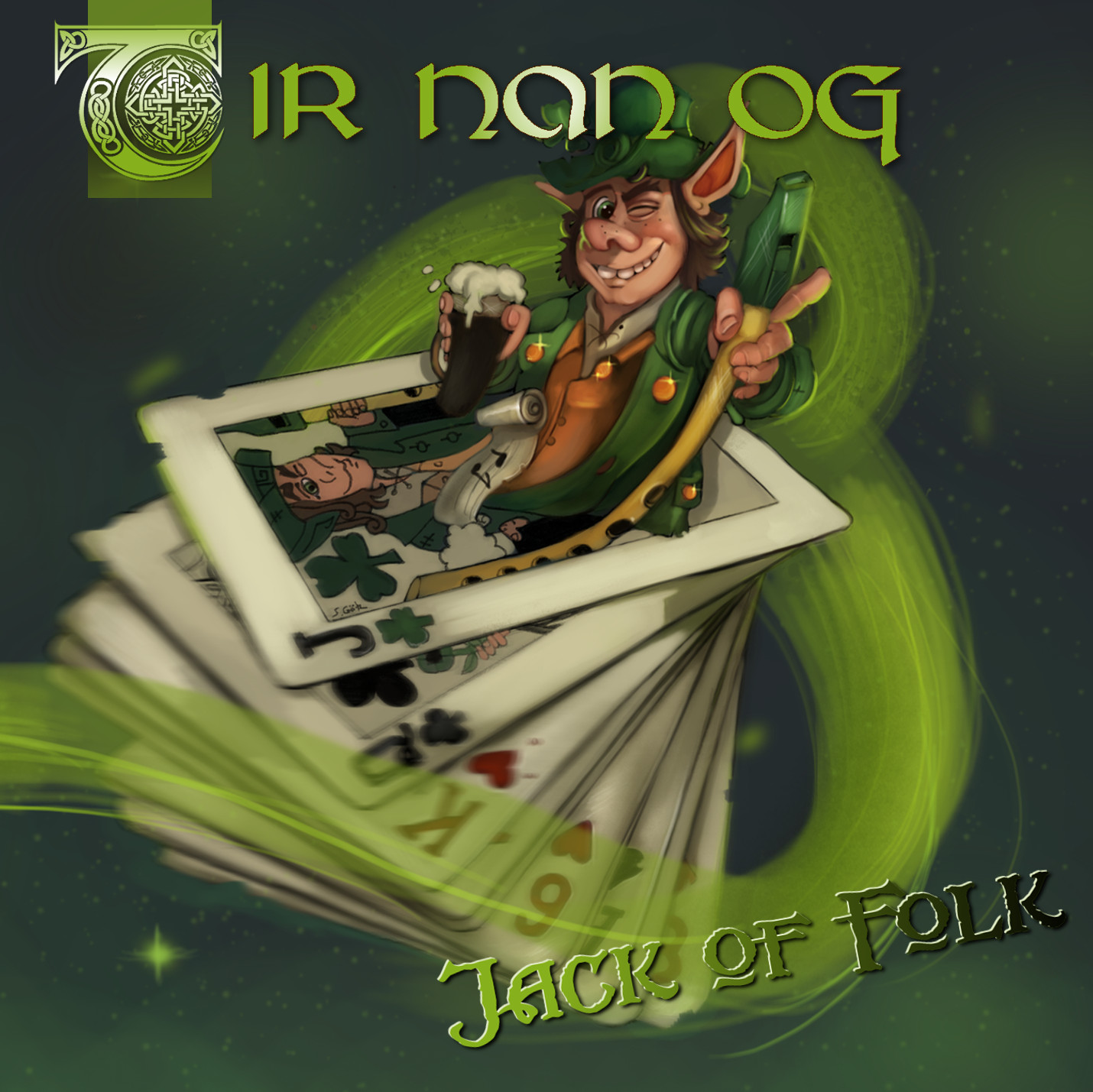 Oh Celtic-music…why don’t we find ourselves getting along much better than we do? My wife had pointed out to me earlier this week that I’d be in for somewhat of a struggle when going to write this one, citing that she doesn’t often find me cranking up the Celtic or dancing too many jigs. I searched and searched the index of my brain within seconds…and I had to actually agree with her. My exposure to music of Celtic sound or influence has been pretty limited…Spirit Of The West would be as close as I would get in a typical listen that might lean towards the Celtic Culture…and that would be a rare listening experience as well. So keep in mind dear readers…today I might very well have no clue about anything I’m talking about.

But I’ll explain why that is and what little ties I have to Spirit Of The West before I bust into Tir Nan Og. I’ve found…at least in my own experience…Celtic-music can often sound completely the same from act to artist and artist to band, all possessing similar tones, melodies and delivery. I’ve rarely heard any combinations that stray from tradition even slightly – so for me that first experience into a cross-genre sound like Spirit Of The West had, well, that became my own way into the sound for the first time, willingly. In the bizarre musical-mindset I call my own…I’m also always on a quest to prove myself WRONG; in the case, I’m looking for those things I’ve missed that endear music-fans to the style and sound…because the best of the best in any genre are exactly that; and any music played with talent, passion and conviction will always find its way into my heart no matter the genre.

So will Tir Nan Og be the ones to turn me into a Celtic fan…I don’t know just yet. What I can tell you, is that this new album Jack Of Folk certainly possesses a TON of skill throughout the songs, the playing is spot on and flawless and sparkling through their performance on this record. Starting out with a vocal-intro skit of sorts, “The Leprechan Speaks” gets the album started for Tir Nan Og…I understand about one or two words, but the bottom line is that this is certainly an interesting beginning for an experience into the relatively unknown for me.

And then it happens! Within seconds, Tir Nan Og has got me on their side with excellent fiddle coming in to start “Johnny Pirate” off with the right energy and subtle, melancholy sound. It’s beautiful playing; great musicianship, and up until about a minute and twenty seconds in, they had me completely on their side. But, what I should have realized from the title itself, was that soon enough we’d descend into pirate territory…and to be truthful, I just don’t know that I can go there anymore. I feel like anything pirate-y makes me feel like I’m standing in line for the Pirates Of The Carribean at Disneyland, which in itself is a bizarre activity – I don’t even like the movies, so why I stand in line for an anti-rollercoaster like this I do not know…

But again, none of this that you’ll read will claim they’re not pulling this off authentically, professionally and captivatingly. Even though it’s not my particular sound per say, I can certainly appreciate the skill and approach they’ve taken to their music and how much complexity, hard-work and skill they’ve put into their music. Perhaps a few of you out there will know what I mean…the beginning of “Dicey Fing Riley…” like, this is every Celtic song right? I’ll admit, I don’t know the name of the title of this one Celtic song…but, well…that’s the one all these bands play isn’t it? Okay…I know that it’s not…but that’s my point in a nutshell…much of this has the potential to sound the same as the rest out there…and I’m hoping that Tir Nan Og will breakthrough this creative barrier and launch into a new take on the genre throughout the songs to come.

For what it’s worth – I think they begin that pursuit immediately in the two versatile songs to follow, “Alive” and “House Of Cards.” “Alive” is just a gorgeously-intense melody and perfect vocal combinations between the male & female vocals. The melody is fantastic…accordion and fiddle bring this track vibrant life alongside a dependable and rock solid drum-beat. This song honestly has it all; and right here on track four of the album Tir Nan Og has set their flag into the ground to proclaim their victory on my interest. “Alive” is a brilliant tune with inventive parts, dramatic energy and emotional content delivered to absolute perfection with excellent song-writing executed with golden precision.

As they drift further from traditional-sounds and into their own, it continues on shining. “House Of Cards,” is a terrific tune, excellent fiddle work here in this song, flute as well…and I think that what they might have traded away is their perfect vocal-tones, but they’ve done so in favour of a sound that becomes a lot more emotionally involved, raw and REAL. Personally I dig the way this one came out, but I can see the argument for the other side of the coin as well…in a sense it comes out much with the reckless abandon & artistic style of bands like The Arcade Fire, especially when they’re trading off between male/female vocals.

Of course…to think I was away from all the ‘yo-hos’ might have been a little of the naïve-side of my natural instincts. I truly did think I was in the clear from pirate-infested waters, but yet here I am again on “To Hell.” Aside from those ‘yo-hos’ the track actually does float my boat, I really dig the lyrics and they really do come at this track and the following “Raggle Taggle Gypsy” with a true authority. They certainly own their style and have all the confidence in the world – Tir Nan Og is certainly making the music they love and perform it all in a charming way that, well, regardless of your love for pirates and such, will keep you listening.

“Raise Your Glass” almost sounds like it’s going to bust into the Celtic version of “Crazy Train” from its opening beat. Fantastic flute sounds really bring this track to the heights it reaches…I like the contrast between the light sounds of the music and the aggression in the vocals. It’s a song about freedom…and you can tell from the commitment in the vocals that this is certainly a subject they feel strongly about. This one still retains its Celtic-backbone without overkill…whereas “Mrs. McGrath” is that song again isn’t? You MUST know that one song I’m talking about right? The one that flows freely from each pub and bar with a Celtic band on stage…I swear it’s like one big long song and they all play it and know each other and all hang out on Thursday nights together…I’m sure it works like that doesn’t it?

Alright – I’ll knock it off. Besides, while “Mrs. McGrath” might start out steeped in traditional sounds, Tir Nan Og unleashes an entirely new gear just past the halfway mark and really gets inventive within this song before bringing back the final chorus. “The Storm,” also has those traditional tones at the very outset, but instantly changes into…I dunno…what IS that? Funk-Celtic? Ha! I’m not sure how you’d categorize it, but the verse is a stand-out here on Jack Of Folk with great bass leading the way here. This song displays a wide array of styles and sounds, innovation and invention; for only three and a half minutes, this song is really able to take you all over their musical map in an audible sampling of skills from each and every department. Great ideas here and a really creative song.

Ending the album is a real departure and something new for Tir Nan Og on “I’m Yours.” The vocals start out the song against the bass, they sound somewhat breakable, fragile…and they’ve brought back a little more of the ‘realness’ to their delivery. Great melody here and a really smooth vocal-flow; well, the flow to the entire song bears an incredible smoothness to it really…it’s a spectacular choice for an ending. Having the fiddle drift in sweetly as it does and the flute sounds as well…I mean, they are absolutely NAILING it here in this final cut.

I think the idea of abandoning those traditional sounds of Celtic-music paid off big time for Tir Nan Og and really lifts up Jack Of Folk at the end of the album in a subtly-intense and hypnotic rhythm that works incredibly well for them. Overall the album is an interesting mix of traditional sounds and modern-day innovation…the more they lean towards making their own unique sounds I found made for the highlights on Jack Of Folk, but I can also see and hear that the people out there longing for real Celtic authenticity would want to hear it done RIGHT by a band as talented as Tir Nan Og is. So truly…I would hazard a guess here and say that what I’m trying to say is that on their new album, you’ll find there’s something for you within these eleven songs no matter who you are or what music you typically listen to. Highly-skilled and bursting brightly with confidence and solid material – Tir Nan Og is thoroughly entertaining.

Find out more about them at their official page: http://www.tirnan.org/