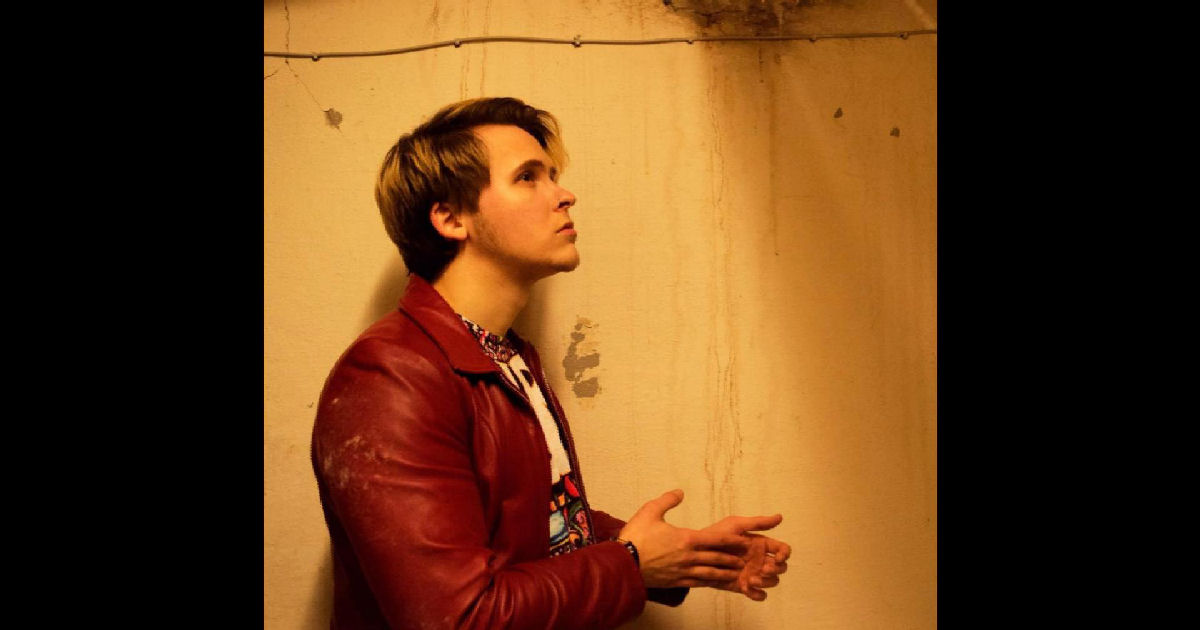 Ooooooooh boy!  Christmas came early – I love artists as diverse, versatile and talented as Timi is.

Setting the stage, the “Intro” lets you know via voicemail…the record is finished and it’s ready to roll.  The immaculately inviting electro-rhythm and melody of “Cold Leather” that immediately follows lets YOU know that he was right about that – this album IS ready…and MAN does it sound GREAT!  That smoothness in the low-tones infused into the sound of “Cold Leather” are extraordinary – and the soulful tone of Timi’s vocals are every bit as inviting as the music is.  The record’s opening tune moves at a deadly pace…plenty of space in the music for each moment and additional element to make its maximum impact along the way.  That punch and crunch of guitars after the three-minute mark is like, EVERYTHING…it might not even be guitars…who knows how or where this madman gets his sounds from – but that’s AWESOME and we can ALL agree on that right?  “Cold Leather” has Timi winning right away; an insightfully balanced tune from verse to chorus, production to performance.

“Heartblood” has some absolutely spectacular moments in the chorus…that entire idea in the vocals at that point in the song will have people reaching for this track time and time again.  Overall, it’s a lot like some facets of Blur’s music at its most bizarre…or aka, Damon Albarn left to his own devices and/or solo.  Just keep in mind…while that may apply to this one track, there’s no way to put any singular description on the music of Timi Alexander…”Heartblood” is but one of his many, many styles.  Verse wise, I think it’s decent enough and there are even more clever hooks that surround the atmosphere of this track floating through the mix while he sings…combined with the rad low-end melody, this keeps us sticking with Timi through the verse while we cruise along with high-anticipation for the next available chorus to jam right into our ears at full-volume.  Overall, I’d admit that “Heartblood” might be a stretch for many people out there to absorb…it’s a highly artistic and strange approach to structure and likely one that people aren’t all-too-familiar with…but it’s that same kind of uniqueness that helps set Timi apart from the rest and keep this entire experience with his self-titled record as diverse as it can get.

I can only imagine many of you would be out there thinking the same things as I am after listening to the awesome back & forth rage of ideals and political-madness that ensues in “Politicking (Skit)” and how Timi goes into the smooth, piano-based Soul/R&B/Pop style of his lead-single, “The Ballad Of A Keg Heart,” right afterwards; considering what we’ve also heard on this records opening songs – it’s impossible to put a box around this artist or predict where he’ll turn to next.  And I LIKE that…don’t you?  You should.  The element of continual surprise on a record can be a really wonderful thing – and aside from his obvious talents and skills, Timi uses that element of surprise as one of his main tools.  Listen to the way that “The Ballad Of A Keg Heart” shifts its sound subtly over the course of its length…that’s just damn good songwriting and structure right there is what that is.  The sweetly jazzy approach to his vocals works well with the contrast of brutal-reality in the lyricism of “The Ballad Of A Keg Heart” and the emotion that he applies to his singing really hits the mark.  Timi’s music is remarkably unpretentious – and you can tell by just how effortlessly he can shift his music into all different directions and have our ears so ready to accept it.  Don’t get me wrong – it’s hella difficult to promote an artist like this whereby each song represents a different idea or part of his endless creativity in a different style or sound – but the cohesion still exists firmly here as a result of the genuine, honest personality and charm he puts in.  “The Ballad Of A Keg Heart” is a great choice for a lead-single…there might be ideas I like more personally perhaps – but in terms of universal appeal and accessibility, this cut’s got the goods.

Honestly, I wasn’t quite sure that the beginnings of “Bonus” was going to lead us where it does eventually either; I’m not so sure it’s the easiest song for the people to hang onto over its first minute – but from there on in, I think any listening ears would be stoked on what they’re in for and ready for whatever comes next.  Not just from this song, but from the entire ARTIST himself…the switch and kick-in to the beat of “Bonus…” how do I say this?  It doesn’t just kick a piece of the ass or a little bit of the ass – it kicks ALL the ass and sounds absolutely unreal to listen to.  The idea is sparkling, the production and performance does it all justice by adding intense dynamics to the beat that make this entire song come roaring alive in an audibly-unforgettable way.  The jazz-meets-industrial-electro style welcomes you right into this song, and I mean…it just ALL gets even better from there doesn’t it?  Those vocals are incredible…I could barely tell you a single word of what’s actually being said and honestly…doesn’t even matter – the way that Timi’s performing this cut is pretty much all my ears ever want to hear.  He might have a backup singer on this cut…it could also be him twisting the sound of his own voice…it’s impossible to tell with this guy – but it sounds insane…insanely awesome.

I would completely get along with Timi Alexander on a musical-level…we’re obviously completely addicted to many of the same things when it comes to texture and sound.  I love the breaks with the bizarre skits like “Politicking” and “Jerrytalk” and the added character it brings to the entire album.  Timi’s put in really smart ideas here that connect the experience through clever threads and audio bread crumbs that lead you along the trail from one song to the next, whether it’s a dedicated track on the album like “Jerrytalk” or a twist to the final seconds of a song to lead into the one up after.  LISTEN to how awesome “BAZ” is…don’t try to tell me it’s not awesome or I’ll have to tape some mouths shut – because that IS what awesome sounds like.  Timi is clearly a musical-madman with a penchant for the bizarre – but his talent as an editor, producer and performer really stands out here amongst the weirdness – it’s not just highly imaginative and unique to listen to, it’s also expertly assembled from end to end.  I love the skips, love the tin-radio sound the song has in production, love the song itself…would I have loved it in some sort of smoothed-out straight-ahead style?  Maybe.  Facts are facts – Timi knows full-well when to get inventive and add that twist to the sound, music or writing to make these wild ideas of his stand-out exactly as they should.  “BAZ” to me, was completely genius.

A song like “Deadline” is sure to please a guy like myself and I’d be willing to bet Timi could listen to this on repeat all day long too…but as for the people out there, much harder to say.  You’re as far down the rabbit hole as you can go before reaching the other side here on “Deadline” – it’s about the sparsest cut on the record and even when the sounds become more extreme or present in the mix, there are still very few of them.  For audiophiles like myself, again, I think you’ll absolutely freakin’ LOVE this track as much as I did…but if you’re after traditional hooks or melody…this will definitely prove to be a challenge for you.  “Deadline” is almost like Timi’s application to the world of soundtracks and film-scores…and believe me, he’d fit right in there too.  You can’t help but notice the incredible amount of diversity that Timi and his music have working in his favor…he could pretty much do anything he wants to and HAS been all throughout this entire record.  Do yourself a favor though…listen to this one as closely as you can and really get right into the layers of depth and the way the sounds move hauntingly through the background all throughout “Deadline” though…trust me…it’ll chill your bones in the greatest of ways.

“Glide” is nearly four-minutes long and ends the album on an extraordinary highlights – don’t let the official song-length fool you, Timi’s packing the extra hidden track here after some silence.  Props to the old-school…I’ve always got time and love for this idea still; I grew up on hopes and prayers that they existed on pretty much every album I’ve ever bought.  Silence – and then MORE music from whomever I was listening to at the time?  SIGN ME UP – every time.  We’ll get to that in a minute though…

There is something massively uplifting in the energy and atmosphere of “Glide” – and the way that Timi gets right into this one makes all the difference in the world.  The music itself is amazing…his vocals though…are so wildly expressive and full of sparkling melody that you melt right into this whole song at its softest moments and grin from ear-to-ear when he takes the vocals for a ride.  Like around the 2:25-ish mark…you can’t tell me that’s not COMPLETELY awesome, cause it IS.  We should all be so lucky as to get THIS far into our art & music – Timi is lost within the moment in all the best of ways at times like these and at his most impressively expressive.  After minutes of silence, the final ninety-seconds or so ends with a reverbed-out acoustic melody that ends up playing like a tape left out in the sun through the warping of the melody and atmosphere.  But let’s face it…if you’ve stuck with Timi to this point, you likely already love what he’s done throughout the record, which has been FULL of imaginative, bizarre and wonderful ideas…this final moment is one last trip into those aspects combined…I dig it.

The bold creativity and imagination you’ll find in an artist like Timi Alexander is something we will always welcome here with open arms and open ears – this guy is highly unique and put out a record that’s extraordinarily rewarding to listen to from beginning to end.