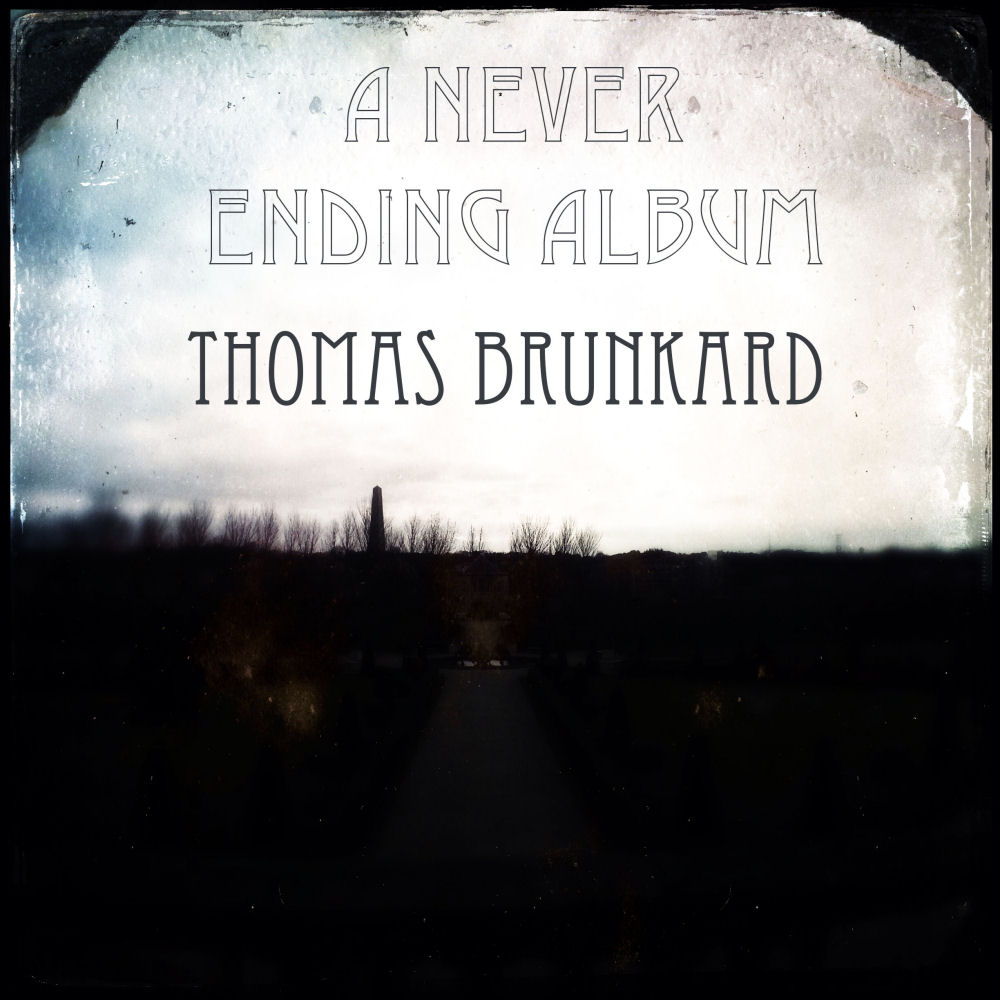 Now here’s a concept I can fully get behind.

Mr. Brunkard has left behind the original formats and conventional ideas on how to go about releasing his music, deciding upon embarking on a life-long musical adventure instead….A Never-Ending Album. To his credits at this stage of the review, there are nine spectacular songs to grace his pages – and certainly my earholes.

What I NEED when I listen to music…not what I want….well, it IS, but also what I NEED from music…is all right here. Each and every track has a completely different texture and flavor from the track before – taking you from what sounds like traditionally-rooted Irish classical to smooth jazz, to mournful instrumentals and outstanding electronica. Just TRY to pin him down!

I can only hazard a guess, but after listening to these nine songs – I bet you’d find that task impossible. One has to believe it serves as the absolute reasoning behind A Never-Ending Album…to NEVER be pinned down or to rely on one set of musical skills….to change, grow, expand, try & experiment….and to experience the joy of truly “getting it right.”

And it should be a non-stop party at Brunkard’s place right now. If you put your ear to the wind just right, I bet you’ll be able to hear the faint sounds of “Mulligan’s Pyre” and the clanking of beer-steins all the way from Dublin, Ireland where you can find him making these genius creations. I first viewed him through YouTube, experimenting on a “Guitarviol” – I say experimenting but the guy is already kicking ass on it and he JUST picked it up more or less in that video clip….

But that willingness to experiment with any sound or instrument is so completely translatable to any style he ventures into – these are skills that transcend musical genres. Thomas understands composition, assembly and music overall at a genius-like level – and he has ALL the skills necessary to live up to these gigantic ideas in his brain.

You can find out more about what I have to say about the musical madness & genius of Thomas Brunkard of the recent episode of SBS Live This Week – episode 083 – SBS But No BS Part XI. We’re spinning one of the most outstanding tracks in this set direct on the show – a song called “Sentient Beings Dance.”

Now…when you LISTEN to it on the show…or at his pages…understand that I had been listening to these songs in the order of the playlist…and though he had put himself into the mix of many genres by this point – electronica had yet to be one of them. Combining intensity, electro-hooks and a demon’s worth of guitar-shred…this track really made me appreciate just how translatable those skills of Brunkard’s really ARE.

If you’re not convinced by then – get yourself to “Monday Morning Blues” shortly afterwards and RECOGNIZE (YO!) that this was made by the same amazing mind. As far as blues go – this is the genre at its absolute finest – I love this track; his guitar tone and playing are just jaw-droppingly awesome. “1967 – Closing Credits” is another guitar highlight for this album, the last haunting song on a list of absolutely memorable stand-outs.

In talking briefly with Thomas Brunker – I completely understand how much care he puts into choosing which songs are making up the contents of A Never-Ending Album. When you listen to it as one whole piece, you HAVE to respect this guy’s immaculate ear and understanding of what “getting it right” really is. Each of these soundscapes like “Menaçant,” “GBH – Ghetto Baroque Hymn” and “Sad Pavan In C-Minor…” again, you could point to ANY of these nine songs…but these atmosphere’s he’s able to create could damn near change the PHYSICAL LAYOUT of the ground beneath your feet to wherever these songs take you in your mind.

What a skill to possess – you’ll be happy to know music is something he takes great pride in, yet remains completely humble and extremely willing to talk & share his knowledge with others. An overall fantastic person and artist – I’m definitely looking forward to the future inclusions on A Never-Ending Album.

Check him out at soundcloud! https://soundcloud.com/thomasbrunkard/sets/a-never-ending-album