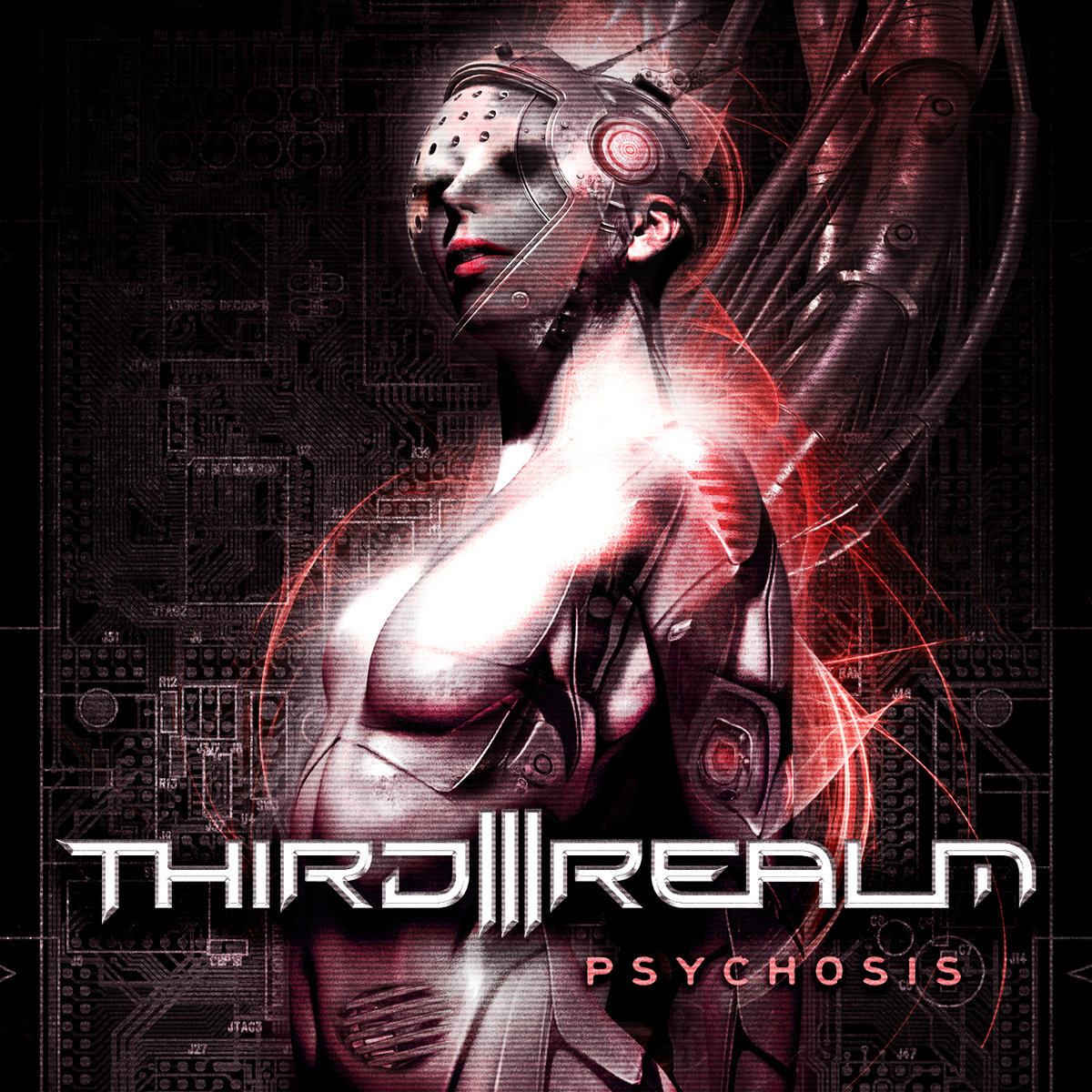 Buffalo, New York’s dark-electro band is back in action with a brand-new album…Third Realm has just released Psychosis and it’s every bit the wild-ride you’d expect from this crew.  Last time out when we reviewed their album Deranged in 2015 we had good things to say…and we made a lot of comparisons throughout the review.  What I liked most about what hit me with this new Third Realm record, was that even though there were still a few comparisons that could be made, really…they’ve developed and defined their sound in ways that’s much more identifiably their own – and right away this new album showed growth and evolution to the depth of their sound as the first song “Dance Like You Wanna Die” began.  This is Third Realm’s eighth full-length album…it’s incredible that they’re still finding innovative ways to entertain and build their sound.

Their signature darkwave-electro sound comes pulsing out at a wicked pace on “Dance Like You Wanna Die” – and Third Realm immediately sounds like they’re on the attack.  By comparison to the rest on the record, this first cut sounds much more raw, hungry and punched-up in its attitude – the rhythm & grind of the electro has serious groove and the vocals come out looking for blood.  The verse is full of pull…the chorus blasts this track into the stratosphere and the sound is full of extraordinary texture.  No doubt about “Dance Like You Wanna Die” being a fantastic choice to start this album out and set the standard.

“Mental State” takes them more towards the electro-side of their catalog & sound with a furious beat & tempo guiding the music along in both verse and chorus.  The added beat that kicks into this cut is where that real energy transfers to us as listeners, and the mix on the vocals in the chorus is big, bold and on the attack.  Kind of reminds me a bit of My Life With The Thrill Kill Kult here…mostly in the chorus, but overall this song finds solid ground in both its main parts.  Wicked guitar-synth sounds around the third minute just before the breakdown and rebuild.  “Mental State” continues to keep the energy kicking strong at the beginning of Psychosis – good ideas, solid groove and evil execution.

Where things really took off for me personally was on the absolute musical carnage that is “Whistleblower.”  What a track!  The easiest way to put it is that I love everything about this cut…and to just leave it at that, but you know I can’t.  This song…THIS SONG…is seriously incredible.  After multiple spins through the record, no matter when I came back to “Whistleblower” it became GAME ON in here – the intensity of this track is off the charts entirely.  The storming pound of the beat, the relentless electro grinding and swirling into the atmosphere…this isn’t just a good track, this is an example of the darkwave-electro genre at its absolute finest.  I loved how deep-set the vocals were in the music…you get every bit of the menace and attitude and it makes the music sound absolutely monstrously huge around them.  Definitely one of the standout tracks I’ve heard on a record this year.

The album’s title-track is full of menace and hypnotic rhythm that I really couldn’t get enough of.  It’s got a real classic pulse to the music’s flow & the vocals as well…kind of one of those anthem-songs whereby the band gets supercharged by the energy involved.  “Psychosis” has real pull to the hooks in the music with its arpeggio-style repeating synth rhythms blazing and the groove thick and enveloping.  It has a real like…marching-feel to it…robotic in a sense – but the groove & melody never quit on this song.  Big hits on the drum-sounds and a more pronounced rhythm than some of the tracks previously make this track have a more widespread and accessible sound overall than what we’ve heard so far.

“Withered Flowers (Weeping Thoughts)” was a great example of really well-defined parts in the Third Realm writing.  First of all…excellent bass-line here on this tune…that’s one serious groove they slip into and the song really builds around the ingenuity you find there.  It’s a lot like catacomb-style music…it’s dark & Transylvanian like that…at times it sounds like it’s beyond the grave and otherworldly in its haunting atmosphere.  There’s a complexity I dig in this song…in many ways I think those hooks are very strong…in other ways I think the tempo of this song makes it a tougher one to get into at first – but I think this is the kind of song that would last for me over many spins of Psychosis.

Whispers and synth reign supreme throughout “The Rule Of Three” as Third Realm continues to pull you underground and into their domain.  The vocals in this track are seriously rad…you can hear the notes in this one take the dude right to the very bottom of the basement of his vocal register at points but every note is bang-on.  Just prior to the third-minute, I thought “The Rule Of Three” found a perfect grind…they sound right in the pocket here as the beat and surrounding elements pick up the pace and become more consistently involved by the build towards the end.  Love, love, love the whispers throughout this track…they sound excellent…and the way this track melts like a hot tape in the summer sun at the end was brilliant.

Like they’re in a competition for ‘how low can you go’ – they take their electro into the grimiest of territory on “God Complex.”  SICK.  The rhythm of this track is beyond brilliant…the rubbery bounce of the synth is mechanical, mean and full of mayhem…there’s a down-low crunch to the sound – “God Complex” has serious bite with vicious teeth.  The roll and flow of the verse of this track might really be the star as impressive as the chorus might be – the hooks are all right there up front in that verse.  Vocals are completely solid throughout this cut…but man…overall this is one seriously mean motherfucker of a song, musically, vocally, structurally, dynamically – you name it and put an ly at the end of it and they’re doing THAT – TWICE!

“Devotion” took a little bit of growing on me by comparison to the rest.  I don’t think that’s the fault of guest-star Hana Piranha…but I’m not entirely sure I felt it added the depth and dimension to the track that might have been intended.  Musically, I think “Devotion” is one of the strongest tunes on the record; the synth is amazing, the electro-elements are awesome and the bass-line is once again off-the-charts good with plenty of rhythm & tone to spare.  Vocally I felt like it worked well enough…I think I liked the performance by both main vocalists more than I did the writing of the melody to the words on “Devotion” – that’s probably the best way I can say it.  Hana puts in a strong performance alongside Third Realm here, but the music remained the star of “Devotion” for me personally.  I think there’s a few bizarre choices as well in the following tune “Burning Islands” as to how to sing it…and I felt that way in both the verse and chorus at times.  By the end of it, the chorus made sense to me…the verse was perplexing at times…you can hear the idea, and it should be within reach but this one sounds like it might have gotten away from them just a touch.  Overall that hook in the chorus is plenty meaty and mighty strong…musically I thought Third Realm stormed through this one with resounding electro-authority but I was never all that sure of the way the vocals worked on this one.  I do like the overall ideas…I think “Burning Islands” is the kind of track certainly worth exploring to the fullest…if it takes a remix to nail it, so be it, it’s a song that deserves the full 100%.  I think they give it that solid percentage in effort on “Burning Islands” but I think the end result was just a touch wide of the intended mark.

The sludgy-electro grind of “Hysteria” felt like the opposite of its title energy-wise.  Slightly drained but still richly dynamic and innovative – the first four-minutes are quite a solid & continuous drone before the final minute decides to blow your mind with a slick transition into the experimental side of Third Realm.  Oddly, “Hysteria” is kind of what qualifies for the ‘slow song’ on a record like this…and the thickness of the atmosphere sounds like they’re carrying a thousand-pound weight on their brooding moody shoulders.  I dig it…but I think they get this style even more right towards the end of the record on “Lost In The Night.”

Post-punk-meets-new-wave-meets-electro-goth on “December” – a real gem towards the end of Psychosis; it kind of snaps the life back into the record here with a wickedly vibrant rhythm, low-end electro and brightened key-tones.  Lots of hook to the writing on “December” and it seeks to establish impact immediately – and it never lets go after that…it’s got perfect pulse & energy from beginning to end.  You could argue that “December” has Third Realm sounding their happiest…it’s still certainly mired in the dark overall – but there’s an additional playfulness, or theatrics to the performance of the verse that has the band sounding like they’ve lightened-up for a moment here.  The music of “December” has seriously wicked depth…and some of my favorite lyrics on the record are in this track as well; and just when you think it can’t get any better – it does…the additional violin sounds in the middle are stunning.  The simplistic keyboard/piano notes also make the perfect addition to the flush out the melody in-full.

But talk about melody!  “Lost In The Night” succeeded in bringing that slow-burning melody to life…I thought this track did a superb job of pacing itself out and hits the concept & energy dead-on in comparison to some of the other slower-tunes on this record.  The others were good – this one is truly great.  The added emotion in the music, vocals and energy of “Lost In The Night” is truly measurable.  There’s a dark-magic to this song…and something here in the overall sound and writing really reveals an entirely new dimension to Third Realm.  The trading off vocals in the chorus between lead & the backing-vocals is 100% of all the awesomeness…the mood here is a heavy one for sure; this entire track sticks to your bones.  I think there’s a real audible passion in this song though…as haunting as it is, you can really hear how comfortable Third Realm sounds in this kind of melody and atmosphere.

I do kind of feel like the album might have ended with more impact by having “Lost In The Night” at the very end rather than “Epiphany Of A Soul” – but there’s nothing wrong with this final track by any means.  I think they get incredibly creative with the synth and string sounds creeping into the mix…the rhythm of the vocals and mix on the sound is perfect…it’s a deadly song really.  The added background elements in the music sound awesome and eerie…like chains rattling in the background somewhere.  The violin sounds are extraordinary and seriously beautiful & haunting all at the same time.  I suppose it’s hard to say…there’s a great argument for this song to end the album just because of the extraordinary building in the structure as it plays…and with that subdued cut into the quiet and more silently-scary ending…well…gotta say it actually does the job quite nicely.  I can’t help myself if I’m just a huge fan of “Lost In The Night” for its layers of depth and emotion…I mean c’mon…they really couldn’t lose no matter which way they turned at the end here right?  Not a bad problem to have if you ask me!

Find out more about Third Realm at their official Facebook page: https://www.facebook.com/ThirdRealm