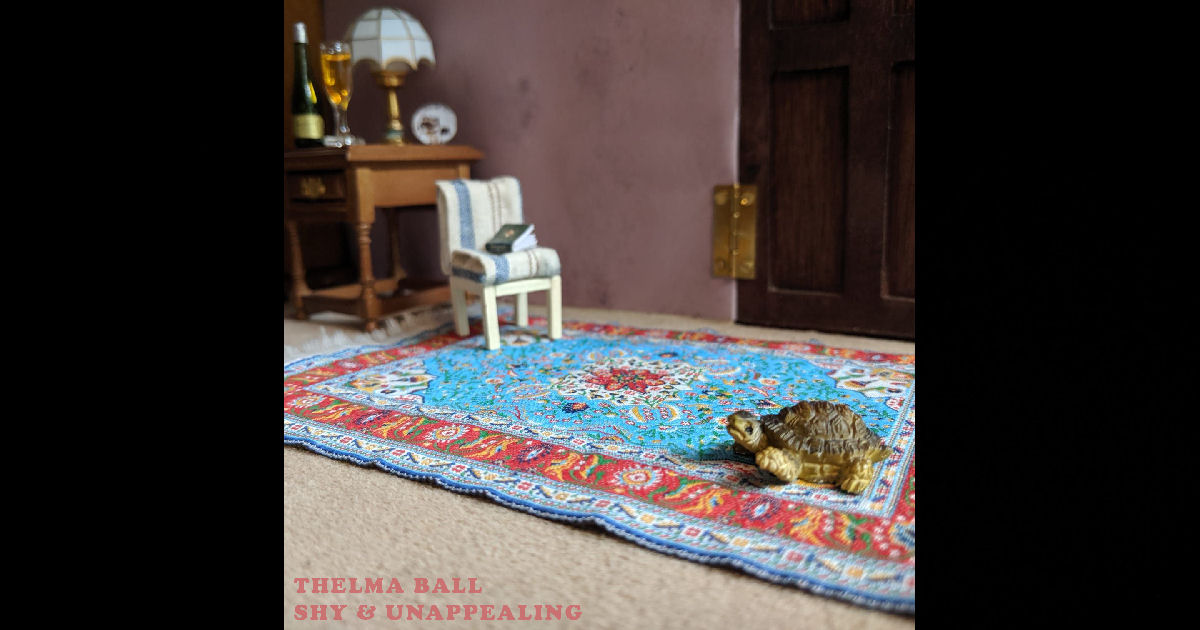 In the first quarter of this year, we were introduced to London’s Thelma Ball for the first time through their incredible single/video combo for “I Could Be Happy” – and in that very review, you’ll find plenty of praise for the kickass sound this band has.  While it’s always theoretically impossible to get the full scope & picture of what a band is capable of from just one cut, you get a sixth-sense about these things if you review or listen to enough music I suppose…there was no question that Thelma Ball was the real deal.  Just something in the air around this band…aside from the balloons tracking their every move in the video for “I Could Be Happy” I mean.  You can feel it…that buzz of excitement & electricity all at once.

I’ve completely road-tested that last single by the way.  I mean, don’t get me wrong, I still spin it occasionally and even have on the ol’ SBS Podcast as well – but even if I wasn’t, it was a highly memorable cut and first impression that I can recall in my mind at any damn time I choose to.  And this is months & months after giving it a series of spins at this point…we’re talking that level of impact.

But just like a cook is only as good as their last meal…or a coach is only as good as their last win…or a clock-maker is only as good as the last clock they made (I’m sure you get the point by now) – the majority of confirmation comes from consistency, don’t it?  Sure Thelma Ball served it up hot & fresh the last time around & that’s all well & good…but what’s the story with this here second single they’ve got?  Will they RISE to the challenge of their established standards of awesomeness and deliver once again?  Will there be balloons this time around?  Will my coffee cup ever just fill up on its own for once without me having to get off my fat ass to make another brew?  So many questions people – read on to find out!

Hey.  Like, if you somehow doubted Thelma Ball and thought they wouldn’t come back with something equally strong & rad…that’s on YOU.  They gave you EVERY reason to believe last time around already; there’s only any drama in this narrative to give you something enjoyable to read.  If we’re REALLY talking about whether or not Thelma Ball would resurface with another killer cut, c’mon – that’s a no brainer.

So here’s where I’m at with the new single “Shy & Unappealing” – I think they’ve likely got themselves an even better song here overall in comparison to the last time I experienced the music of Thelma Ball.  There is a noticeable chasm of difference between a great song and a great single however, and that needs to be made somewhat clear; I wouldn’t expect “Shy & Unappealing” to catch on quite as quickly as their last single did, but I’d be willing to stack chips behind a bet that it’s a song that’ll hold up longer on the playlists of the people out there over time.  It might be a six or one-half dozen of the other type of situation at the end of the day…but the bottom-line really is, both songs I’ve heard from Thelma Ball have ended up genuinely connecting for one reason or another…or another & another…you get the point – there’s a ton of great things goin’ on in the sound & style of this band, and they present more depth through this second single here in review.  Or at least, perhaps a more apparent depth…”I Could Be Happy” actually has a ton going on in that sense too, but masked it under a much flashier demeanor.  I wouldn’t exactly say that Thelma Ball has gone more low-key in the approach to “Shy & Unappealing” or dialed anything back necessarily…it’s just more of a smooth & stylistic ride…kinda how like, say the music of The Strokes kinda sneaks up on you in that sense.  You end up listening & taking in the melody offered up on the surface, with a similarly deep-set vocal approach in behind the music like Julian & his crew brings to their music…and honestly, it’s a recipe that’s tried, tested, and true in terms of pulling in people like myself to listen.  It’s a way to create songs that have both the music & vocals standing out for all the right reasons…and while it might initially be a little bit harder to get to the core of the words in a scenario like this, it’s also an audible incentive to listen even closer to see what it is you might find.

Plus…it’s like, before you even realize it, you’re in the middle of sincere hooks & sound you’ll remember.

Lyrically, I think Thelma Ball pulls out a really strong win with some truly endearing & empowering words that are relevant, substantial, and seriously well thought-out.  As far as the performance goes, they’re completely on solid ground with what they’ve got here, not a weak-point to be found anywhere.  It might not provoke the immediate spark of interest that their last single did…and that’s okay; if I were the band, I’d be prepared to absorb that with a smile and carry on confidently…”Shy & Unappealing” has a different kind of humble magic that continually reveals more value in its content with every repetition.  It’s the kind of song that people will come back to, time & again, to connect to a moment they shared…a time they were alive & loving life without a care in the world…a time where the music being played made a good night become an unforgettably great one…that’s the feeling you get from the new Thelma Ball single “Shy & Unappealing,” (out officially two days from now on the 9th) and you’ll find in their upcoming video supporting it (rumored to be released the 16th) brilliantly brings that unified vibe to life.

And…I mean…I don’t want to give it ALL away…BUT…let’s just say even the legendary Danny DeVito will make an appearance in the video for “Shy & Unappealing” as well.  Just another reason to check out what Thelma Ball is up to…but by this point, let’s admit it, they’ve given us plenty of’em already.

Find out more about Thelma Ball from the official pages below!