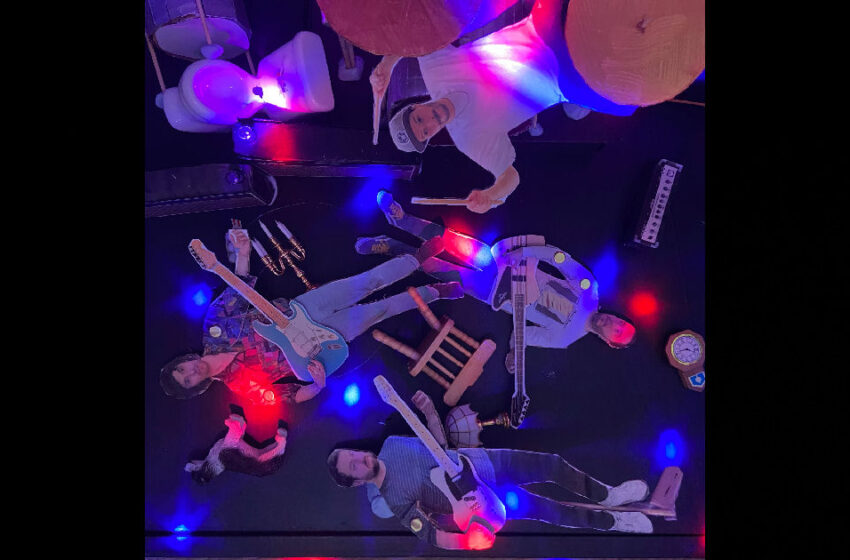 I’m only here to confirm what you already know, aren’t I?

I mean…I’d only assume that you’ll all listening to Thelma Ball by now…you’re savvy folks…so clearly you’d know that their latest single “Like A Thing” dropped online officially a couple days back and you’ve already been spinning it relentlessly – right?

If that’s NOT the case, you’ve got some serious catching up to do.  I’ve been ridin’ with Thelma Ball on my playlists for several years now with plenty more to come in front of me, and I’d highly recommend you climb onboard their bandwagon before there ain’t a seat left for ya to sit down comfortably and it’s standing-room only.  Every time I push play on a new cut by Thelma Ball I’ve found something well worth listening to and a band with a seriously remarkable amount of signature sound that no one else out there really has…it’s this blend of lo-fi Indie-Rock that is absolutely all their own, and it’s freakin’ great.  I’ve described it like a tape that’s melted in the sun in the past, and for the most part I stand by that…I know it sounds like an odd way to label it, but believe me, it sounds spectacular, every time.  Listening to those melting guitar strings heat up for the melody fueling “Like A Thing” at the very start was like an instant hit of what I needed to get the energy flowing outta my speakers in the right direction.  I’ve always got time for Thelma Ball, and if I didn’t for some reason, I’d find a way to make some.  They really have their own thing going on…and in that sense, if you dig on what Thelma Ball does, it’s certainly easy to conceive that you’ll dig on ALL of what they create…they’re building on their own legacy and making music that you couldn’t mistake for any other band or artist out there whatsoever.

That kind of identity in sound is an invaluable asset, and sooner or later, it’s going to be what leads Thelma Ball to the success they’re looking for.  Sometimes a sound takes a while to catch on – that’s just the nature of the game…but when folks DO catch onto what these guys are doing, they’ll find an entire catalog of cuts they can completely enjoy, where basically everything they can click on will offer them more of exactly what they were looking for.  Thelma Ball does more than enough to change enough from track to track yes, but the consistency & cohesiveness of their catalog overall is equally bulletproof – when you’re listening to a song by these guys, they leave ya wanting for nothing more than exactly what you get, and continually surprise ya just a little by innovating their sound that much further from the experience you had before.  We’re not talking about leaps and bounds here – nor do they need that whatsoever – Thelma Ball has been bloody brilliant from day one…all they need to do is keep shifting things around enough to keep us all entertained with something new, and believe me, we’ll all love it.  Some bands that are out there you want to change from the top to the bottom – this one has long proven that what they’re doing completely works…it’s just a matter of people catching on at this point.

So if you were to ask me if “Like A Thing” moves the needle significantly for the band…I mean…I’d probably say no to that particular question – but again, I don’t think that’s what they need to do at all – I think Thelma Ball just needs to stay the course and keep doing what they’re doing…people will catch on.  How could they not with so many incredible assets in this band from the music to the microphone?  The moment that “Like A Thing” starts, every time I fall in love with the guitar sound this band has inherently, and I’m always equally impressed by how much identity they establish in their vocals as well.  No matter how you look at it or what you choose to examine, Thelma Ball is doing their own thing and they’ve been doing it incredibly well – “Like A Thing” is more confirmation of how dialed-in to their sound and the vision for what Thelma Ball can be, and they’re executing at a perfectly professional capacity that gets everything they’d want to have in these songs they write, in’em!  Think of it all like a satisfying meal where you want another bite, but know that deep down, you’ve got everything you needed already – I feel like the glutton I am when I listen to Thelma Ball because no matter how much I like one of their tunes, I wanna consume the whole catalog over again when I listen to a new song of theirs.  And so I do…because nothing can stop me, and these guys are damn good at what they do.

If I had advice for them, I’d lay it out like I do with every one of you that comes my way…the facts are the facts though – Thelma Ball is a band I leave alone to their own devices because they haven’t given me a solitary reason to think anything I could say would make them any better.  We’re literally in a case where it’s all about waiting for the world to catch up here folks, that’s the heart of the matter…and I have faith…I know great music like this eventually gets rewarded in the end, even if it takes a little longer than we’d like it to sometimes.  “Like A Thing” is more proof & confirmation that Thelma Ball has all the right ingredients – and in this particular tune, they might even have a bit more goin’ on for them in the hooks of the music than you’ll find from the mic, but just by a hair at most…for the majority of what they put out, this song included, you’ll find it’s the unity of their sound, attitude & spirit overall that always makes the difference.  They know what they wanna play, how to play it, and they execute like complete professionals.  Despite their willingness to explore the weird, wild, and bizarre, there’s really no mistaking just how good they truly are, and just how damn wonderfully accessible, appealing & addictive the music they’re making always IS – “Like A Thing” included, 100%.

Find out more about Thelma Ball at Facebook here:  https://www.facebook.com/ThelmaBallThelmaBall