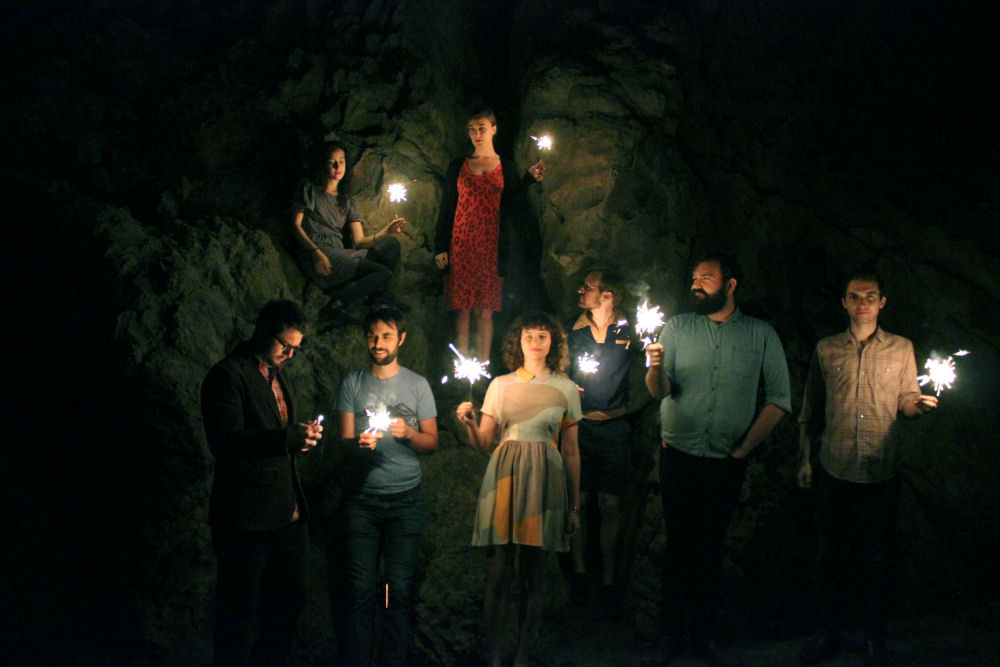 When you look up The Yellow Dress on Facebook one of the first things you see and notice might very well be the same first thing that caught my eye. At the top of the page, right by the “about” button where I usually go to check into all of you wonderful artists…you’ll see a simple, small quote that perhaps is somehow to encompass the entire feeling, theme and inner-band dynamics is all of five short words – ”It’s going to be ok.”

To see the quote on its own without the context of the music to go along with it simply wouldn’t make sense. But to know that quote exists and THEN listen to this music helps to offer a completely different experience in listening to the music on Faint Music Ordinary Light, this new offering from The Yellow Dress. In fact, from the moment that the rush begins with the opening track “Tummy In The Blood” you feel like you’re a part of this music…you can feel that desperation and genuine hunger to make this a career that lasts right there through the words and the frantic playing at the outset of the album.

I’ve had the opportunity to listen to The Yellow Dress throughout this past week and I can honestly tell you I’m incredibly excited about this band. To me, if you were to take The Head And The Heart and The Airborne Toxic Event and tell them they had to live on a musical diet of The Pixies alone and nothing else…the music that could come out of that chance encounter and direction might sound exactly something like this new album. Maybe a slight addition of some Cold War Kids, or The National, just to round it all out.

Led by Dan Weiss, the sole member that can be found on every album, The Yellow Dress is a project that could very well renew your faith that there is still plenty of amazing music left out there to be made. With a combination of Folk/Pop that is frighteningly unmatched – The Yellow Dress personally have me believing by only halfway through the album that it’s actually “going to be MORE than ok” if bands like this continue to stretch their imagination and creativity. The ideas that exist within this band are phenomenally unique in their composition and execution.

What hit me at first was that extremely strong folk element to the music, but what stuck with me and stayed was the immaculate gift this band has for pop songwriting. NEW and EXCITING pop songwriting. In many ways, pop music is much like the often referenced “seven endings to any comedy sketch” whereas even though it might sound new and exciting, it wears itself out quickly upon listening because it truly HAD been done before. Somehow – The Yellow Dress have put together an entire album full of hooks that are guaranteed to own your earholes, but it truly is amazing at just how NEW all of this sounds.

“An Elegy For Laura Shain” is another wicked example of the argument that this band is the complete package. The lyrics are incredible, tell a story and make you feel SOMETHING. The music is inventive, creatively over-flowing and passionate. The vocals are attacked like it’s the last song to be sung, with haunting harmonies creating an atmosphere that leaves you no choice but to become a part of it. Guitar solos, a crazy bass line and stomping drums – this track has it all.

Now I’ll share a secret with you – so do the rest. To single any track out on this album of completely ingenuity would be a disservice through review and I simply won’t be party to that. Besides – that would also be like saying that “An Elegy For Laura Shain” isn’t instantly followed by the equally amazing “A Complete List Of Fears Ages 5-28,” which it most certainly IS and definitely cannot be ignored. But like I said – I truly feel this could be argued for each of these tracks containing new qualities and experiences for your musical palette.

To close this – I want to remind you all that music can be this amazing if you want it to be. The Yellow Dress are well ahead of the curve right now, offering music made completely new through some mind-blowingly unconventional ideas and combinations, but that doesn’t mean you can’t catch up! Faint Music Ordinary Light excites me beyond belief because every moment, sound and instance was NEW but stuffed chockfull of pop that it contains an accessibility most “new” sounds don’t get to enjoy. Break free of those conventional sounds and songs and IMAGINE where you might go if you were left only to your own devices and instincts.
“It’s going to be ok.” Perhaps it’s advice for us all to go with our gut and see what spills out of our untainted souls onto record. Whatever the case may be, however that comment was meant, there’s only one thing I can even think of that makes me question their logic…

I’ve come home from work in this past week with this new album in some pretty OK and average states…so how come every time I push play on Faint Music Ordinary Light my day goes from OK to INCREDIBLE?

Go check out this band!!!

You can also find more info on The Yellow Dress here at:  https://www.facebook.com/Theyellowdress