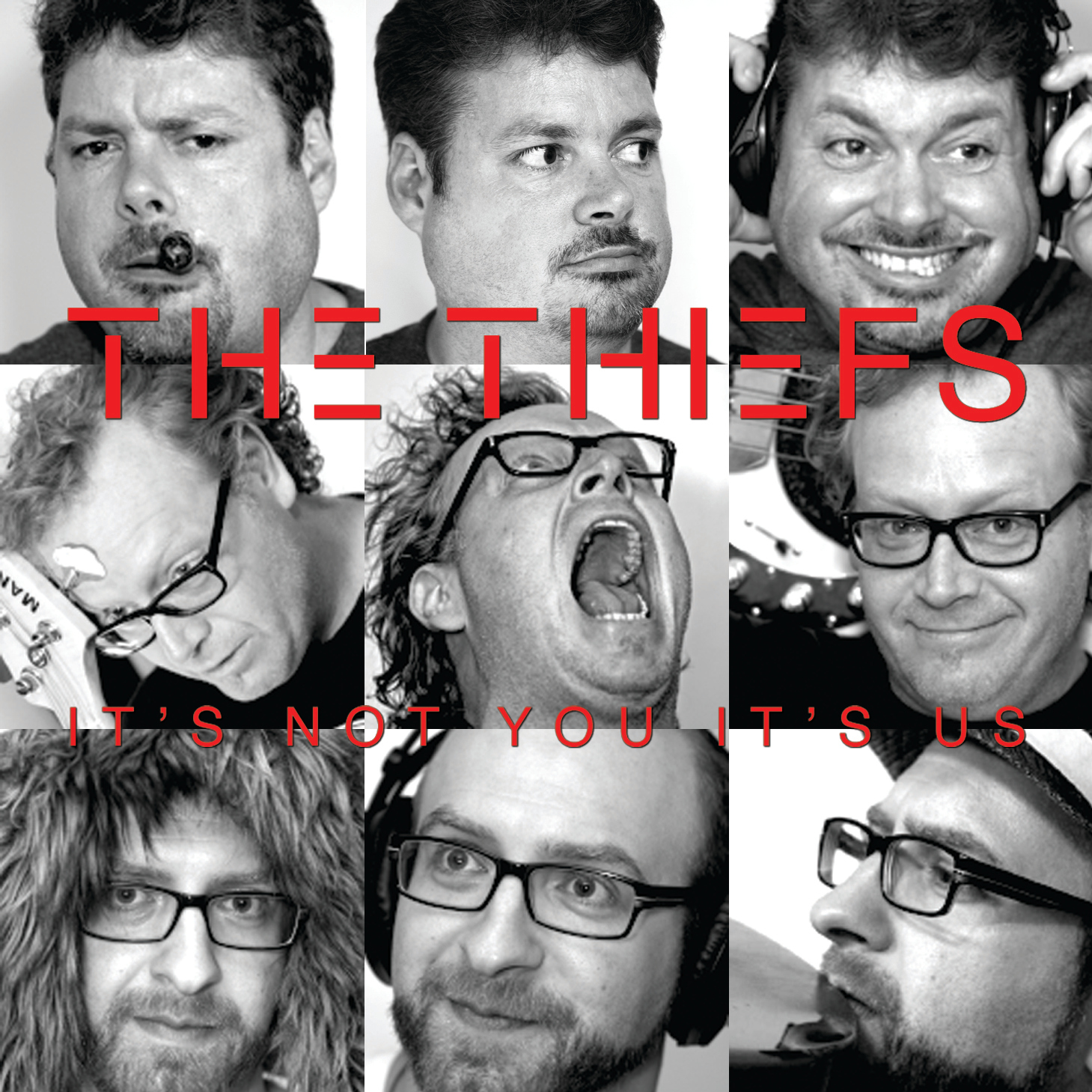 Through our show SBS Live This Week and here on the page at sleepingbagstudios.ca we’ve talked plenty about that quest for timelessness in songwriting; specifically pondering on how to go about achieving songs or albums that stand the test of time decade after decade. Whether The Thiefs have done it with this new EP…well…as indicated – only time will tell…

But what made it instantly interesting to my ears personally was that right from track one – “Cue Up The Band” – I kind of did this weird mental checklist all of a sudden. Mentally I began to check off decade after decade of music and its influence on the music of The Thiefs, and as I sat here listening I thought to myself:

It’s Not You, It’s Us has that magical ability to appeal to nearly any age group and sound right for rock fans of any generation. Well…okay…you can probably still write your grandparents off as fans, but any age under that is certainly fair game. The music is BIG and designed to be turned up LOUD or most certainly seen live as well I’m sure. Each track is electric with life and energy…these tracks are movers…

And while many might argue there’s a lot about The Thieves that are “straight ahead rock” – I think there’s more to them than that. If I was to make musical comparisons…I’d say we’re looking at a combination of Fuel, Reef, Social Distortion and Pearl Jam. The good Pearl Jam. The one you all love from Ten. Don’t believe me? Check out the track “Headhunters” on It’s Not You, It’s Us and go about two minutes in…classic Ten vibe there for sure!

Each and every one of those bands I can hear in the third track “Liquor Store” – the centerpiece of the EP and a truly fantastic song. I’ve spun the EP several times now and each time this track comes on it’s as welcome as having your best friend come over for a beer. Also the longest track on the EP – there are no ideas they test out that fall flat; as the track twists and bends alongside the tremolo-effect guitar – Ben Wolfgang also displays some of his best vocal work and guitar abilities. Definitely a standout track and certainly one that has all kinds of crossover potential while they tone the rock down slightly here in the middle of the EP.

But chilled out and toned-down is NOT where you’re going to typically find The Thiefs I suspect, as they instantly come back to the full-on rock with the next track “High Command.” With this track, you could add Stone Temple Pilots in as a listed influence…thankfully Wolfgang hasn’t wussified himself like Weiland has and fits the track perfectly with a low rasp and powerful punch in his delivery.

“Good For My Age” also has that tremendous rock-anthem feel to it – though this is where I’d personally advise the band to be cautious. I know, I know…I’m always the weird one in the room…

Cause if you listen to it – you’ll hear Mike Eudy absolutely stomping and kicking the crap outta those drums, perfectly written for the song and communicating perfectly with the bass of Matty Bryson…so what could be wrong, right?

Nothing. Technically over the five songs there’s precious little I think anyone who likes rock would want to change – but I would PUSH them. Some of you out there have read similar advice through these reviews on your own work as well – so at least some of you already know I mean this in the kindest possible way… When I listen to The Thiefs track “Good For My Age…” well…it’s just that it sounds like they could rip that one out with their eyes closed and create another rock anthem equally as big right after.

Personally, I heard four tracks that DID push – and again, no technical fault on the last track “Good For My Age” – it’s a damn good rock song too. Maybe it’s just that they play it so well it sounds too easy for them…I dunno. Maybe I’m just crazy…maybe it’s late… But while I might have made comparisons to other bands throughout this review – it’s the way that they bring these influences and sounds together to create something unique and identifiable to The Thiefs.

EP’s are fantastic tools – you know that. The feedback on this EP from all kinds of sources and earholes will certainly help guide this band to success in the future – they have all the right tools and a sound that’s still plenty relevant in today’s world. There is as assuredly a place for them in rock music as there is for It’s Not You, It’s Us to stay in my own rock-rotation.

You can bet on it.

Check out the music of The Thiefs directly through: http://www.thethiefs.com/