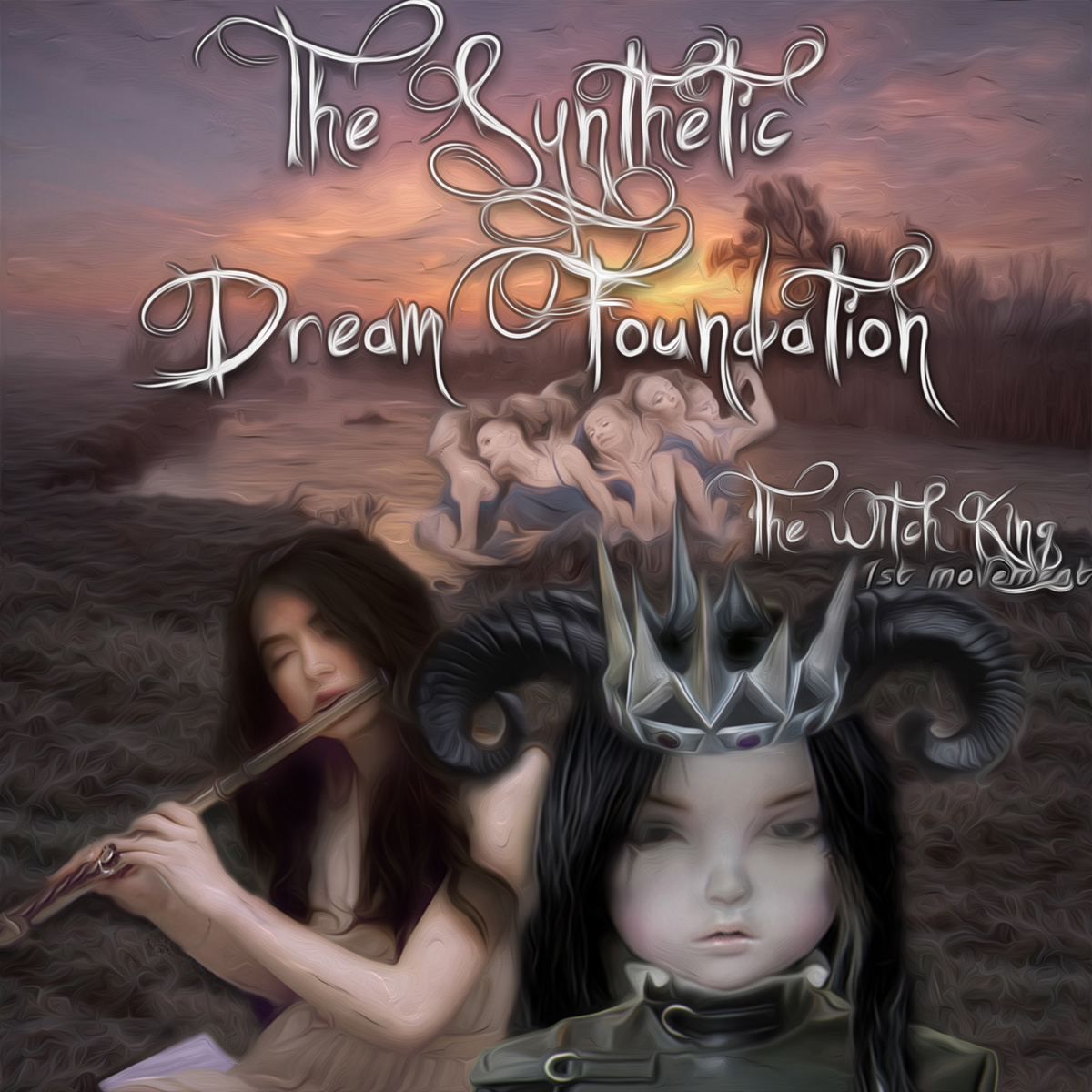 I’ve actually put in quite a few listens to this set of three songs on The Witch King (1st Movement) EP from The Synthetic Dream Foundation and in a bizarre twist I actually noticed that this new recording is coming from a familiar place. Mythical Records, who at the end of last year released the album Scenes From The Magic Eye by Rasplyn, which was another extraordinary record. And as I spin through the new EP from The Synthetic Dream Foundation its becoming clear this record-label might just have a knack for finding some extremely innovative talent out there in music…

As it starts out with “In The Realms Of The Unreal,” atmosphere becomes king right away on this orchestra-meets-electronic combination that really grips the listening ear right away. With an eerie soundtrack-esque opening that pulses along like a hot track from Nine Inch Nails, the low-end synth & static is mixed in perfectly throughout this intense opening song. The equally eerie chorus of voices takes over throughout the song; they continually build upon themselves in theatrical waves of excellent vocal tones and haunting delivery.

Interesting of course when you realize that this is all being created by one man, Brett Branning. Kind of sounds like the alter-ego of the Hulk’s Bruce Banner…and much like the Hulk, Branning seems to be able to switch from sweet to raging at a moment’s notice. “In The Realms Of The Unreal” has a fantastic way of sneaking up on you…and by the time you’re in the middle of the track all hell has broken loose; you’ve stepped entirely into the world of sound created by The Synthetic Dream Foundation and perilously found yourself immersed in it as this opening song attempts to stake a claim on your mind, body & soul.

“The Human Harvest” plays with the choral-style vocals once again but in a much more subtle way. The vocals drift in and assist this rapid-fire electro-beat, in addition to a much more aggressive and robotic lead-vocal performance presumably from Branning himself. In a sense…this track is a little more ‘standard’ than the opening tune in terms of what you might expect in the electro-genre; but to listen to it is certainly also to acknowledge the hard work and effort that goes into creating an electronic-fusion of combined sounds like this. It rips along at a delightfully quick pace, the sounds are bright & bold, well-produced & mixed & all that…there’s nothing NOT solid about that track…but…

I think that when you hear “In Letters Of Black Night” you’ll get where I’m going with this. Seriously excellent atmosphere in this final track on the The Witch King (1st Movement) and I think with it being of a more similar vibe to the opening song “In The Realms Of The Unreal” also puts a real spotlight on what this artist does best. Again – this EP’s middle-point is not a stumble of any kind whatsoever, but the surrounding songs have shown me a real depth in sound-combination and some truly captivating and creative ideas.

Really clear atmospheres like these are created by people that truly have artistic vision strong enough that they can already hear songs like this in their mind. I think there’s something unique and really special about Branning and I think the combination of sounds & moods he’s found on the bookends of this EP work incredibly well. It’s the kind of authentic approach that really sets an artist apart from the rest when the result is this rich in sonic texture – in short, I can see the potential for a gigantic following of music like this.

So…to wrap this up… Opening & closing tunes are absolutely stellar, the middle point doesn’t drop the ball and keeps the energy up – but I do think that Branning has a real choice to make when putting these songs out there through The Synthetic Dream Foundation; that choice being whether or not he wants to sound any kind of ‘typical’ whatsoever. With “The Human Harvest” he’s successfully stormed & conquered sounds that have been somewhat explored in electro…and it almost sounds easy for him.

Whereas the opening “In The Realms Of The Unreal” and closing track “In Letters Of Black Night” ALSO sound easy for him…that’s only because they hint at the limitless possibilities of where Branning might take this music of The Synthetic Dream Foundation and are executed with flawless precision and dark, immaculate passion.

There’s an audibly-tangible difference between the bookends of the album and the middle-point…it’s in the energy of the ideas themselves. I’d be the last person to say there’s a single track on this EP that DOESN’T work – they all truly do…but…

…but if I was Branning…I’d be tempted to explore these unique textures, tones and dark-alley melodies even further and continue to branch out in every incredible direction he can reach to; definitely an extremely capable electro-artist and one with endless possibilities for captivating us all through the music of The Synthetic Dream Foundation.

The new three-song set, The Witch King (1st Movement) EP was made available on the 29th of May – that’s right you read that correctly…you’re already a day late at the very least! Check out what Branning is up to in The Synthetic Dream Foundation at the official page here: http://www.tsdf.net/

Find out what else is up at Mythical Records here: http://www.mythicalrecords.com/