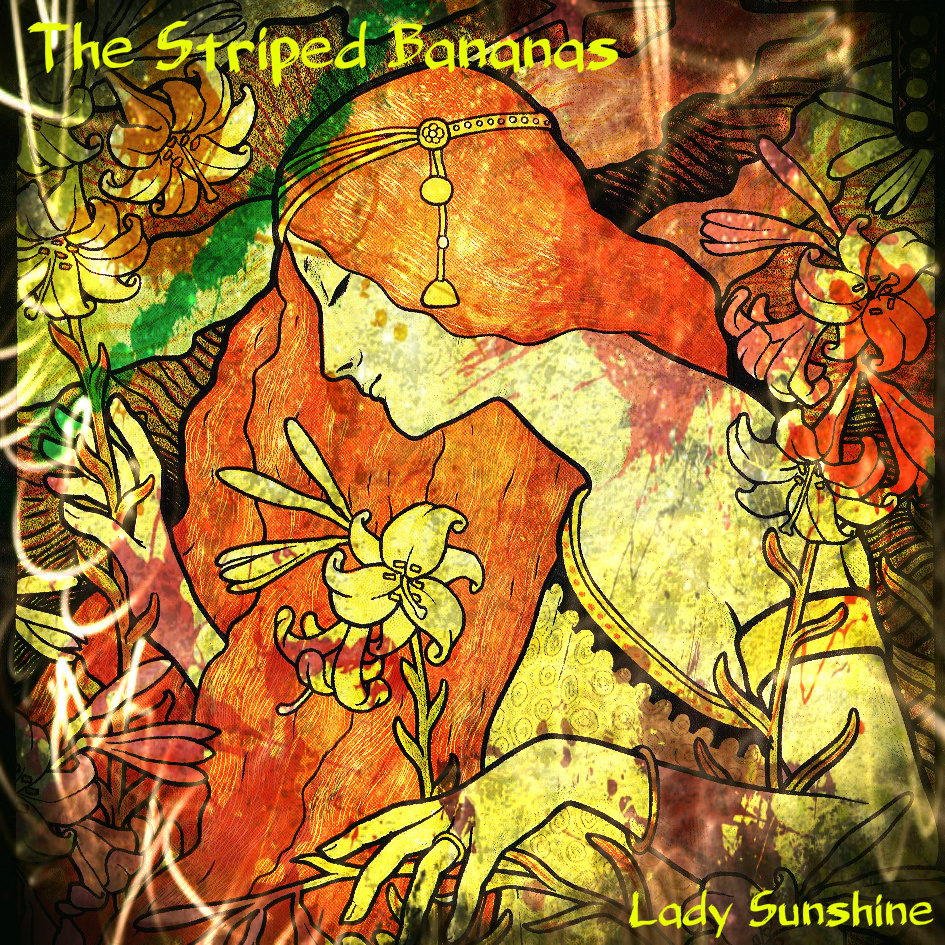 Yep. They just MIGHT have had me at their own description of their music: “Psychedelic Basement Rock” – who doesn’t want to hear some of THAT? Consider me all about it. And after pushing play on Lady Sunshine, the new album from The Striped Bananas all suspicions are confirmed – this is definitely something I can dig on.

One could easily imagine The Striped Bananas as maybe what the modern-day Beatles would have become…had they continued to follow the marching orders of Sgt. Pepper. Though the vocals come out a little more Crosby, Stills, Nash AND Young, the combination works well against a thick 60’s-70’s atmosphere that stays constant and true to the sound the entire album through.

There’s commitment here, and you can audibly hear it. They’ve got many of the vintage tones and vibes long missing from modern day music; it’s almost as if this album was secretly written 40 years ago and just released now after a fantastic restoration and re-mastering. Lady Sunshine is spectacularly vibrant in clarity. Songs like “Wednesday Morning” and “Dark Peace” allow you to really hear that separation in the instruments through the mix, letting you really dig into each individual part being played.

“Black Velvet” sees this band switch up the vibe to a place the Beatles most likely would never have gone…perhaps as the title implies, this is a much more Lou Reed/Velvet Underground style that works extremely well for them and carries right on into “Oasis Of Time.” No joke – this song NEEDS to have its own paragraph…

“Oasis Of Time” is pure fucking genius. I know I try not to play favorites and it gets the better of me all the time…as you all know, I’m a song guy not an album guy…but this…THIS track is an absolute masterpiece. Does anyone out there remember the song off the Beck album Mellow Gold called “Whiskeyclone, Hotel City, 1997?” I know – completely different tracks in nature of the writing – but listen to those gorgeous similarities in the production and the atmosphere in that track. It remains to this day one of the most haunting tracks in the Beck catalogue, and “Oasis Of Time” is a track that can match that spine-tingling sensation note-for-evil-note.

Commitment to that guitar solo in “Mistress Of Existence!” Hot damn!

The vocals are stylistic…for some they might sound “off.” If you’re a fan of that psychedelic basement rock sound though – just take a look at their influences on their Facebook page and you’ll know if you identify with their sound. Nearly every one of the influences listed has a controversial vocalist at the helm that some would argue is genius, while the other half can’t seem to grasp it. Personally I think it fits this music well – and considering musically they never let up I think that’s an accomplishment; to find vocal ideas and rhythms that fit in with all these creative ideas at all would be extremely hard work.

All in all, The Striped Bananas and their album seriously sent me back in time musically in a wicked way. Lady Sunshine stands as a great reminder that a true “sound” can exist long outside of the decade it was born from and still be completely relevant today.

Check out The Striped Bananas at their Facebook page at: https://www.facebook.com/thestripedbananas