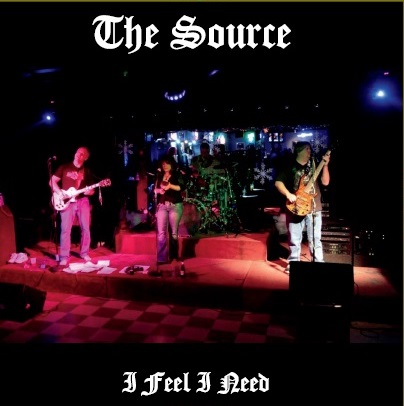 The Source – I Feel I Need – Album Sampler Singles Review

I got big respect for any band willing to put a warning label on their music playlist that reads ‘CAUTION: LISTEN ON GOOD SPEAKERS J’ – which is exactly what you’ll find at the top of the list at The Source’s main website.  Don’t mind if I do – I’m well-inclined to take them up on their advice.

So I’ve got it turned up loud & proud as I check into the opening five-tracks from the album-sampler of The Source’s new album I Feel I Need – and right away the production itself warrants that extra volume.  It takes mere seconds in the sound of “Sand Of Afghanistan” starting-up to hear that any time, money or effort has been well spent here – this sounds crisp, clear and extremely well mixed together.  The opening of “Sand Of Afghanistan” snaps together brilliantly as the beat & instruments all fall in line.  Whether this is autobiographical content or not…I’m not completely sure, but from the descriptions and imagery in this opening tune…sounds pretty damn authentic to me.  Detailing the horrific-grind and overwhelming emotions of being posted in a war-zone, the lyrics are definitely sharp in their narrative and point of view.  Absolutely loved the music in this opening track right away…took me a bit longer to appreciate the vocals but the lyrics continued to pull me in along the way until I accepted them.  I think he does a good job…he’s got solid tone and projects strongly…at times I felt those vocals fit the music really well and others I wasn’t quite sure of the mix of his low-tone with the brightness of the song overall despite a virtually flawless performance from everyone involved.  As with all new music…sometimes it just takes some warming up to…sometimes the clarity of the vision overall ends up coming through more clearly through other songs later on and then when you repeat the experience, it’s like you never really even heard those first songs before at all – know what I mean?  Once that scope of the sound, ideas and music become something more familiar – you can end up digging things for all kinds of crazy reasons.  I think there’s plenty to love about “Sand Of Afghanistan” in the musicianship and writing…it’s definitely impressive.  Having a song with this kind of heavy imagery & sentiment at the very beginning of a record would certainly also put the impression into many that we’d be in for a politically-aware album of some sort…so in a sense…if that’s not the case – they’d be taking a slight chance with that choice of opening song potentially putting off the people that are looking for something less grim.  I look at it the same way I look at all songs…we could choose to write about anything under and beyond the stars…and when a band starts out a record without at least mentioning chicks & cars AND they’re part of the rock-genre…you get an instant thumbs-up from me.

The new-single/title-track “I Feel I Need” has a real meaty-riff and serious attitude dripping from every string on that sweet-crunch and low-rumble of the guitar-melody that drives the song.  Really solid build to this song…it never fully explodes so much as expertly contains itself in a seriously chilled-rock vibe that’s hypnotic, groovin’ and flat-out entertaining to listen to.  It’s got a real classic sound to it…and by that, I mean “I Feel I Need” could have existed and thrived at any point throughout the past 50 years and found a supportive audience; it possesses that quintessential dose of true rock-coolness you can’t help but admire.  Quite often I review albums or EP’s where I question the decision of what might drive a band to release ‘THAT song(?)’ as the lead-single – but I wouldn’t even dare to argue the choice The Source has made here by putting out “I Feel I Need” as the track to pull people into their sound.  A solid decision made by sound-judgment and a great call by this band – they put their best-foot forward with real substance you can sink your teeth into in the blues-rock/alternative title-track.  Dig it!

The four-piece band continues to impress with vibrant rock-riffs on “Goodbye My Old Friend.”  I think it’s important to note that this is all being recorded in ‘The Ed Shed’ – which is their own private recording lair that allows them the time to get it RIGHT – and they certainly are.  I was honestly blown-away by the clarity and production of this coming out from the indie-scene – someone behind those boards (presumably Ed with it being his shed & all…) certainly knows their way around them.  Very few issues that are audible…a couple things like “I Feel I Need” coming out slightly quieter than the rest…and if I had to venture a guess without looking, I’d be inclined to believe that Ed or whomever is at the helm of the mix is also the guitar player.  It might NOT be…I can’t say it for sure; those guitars are either up just slightly higher in the mix of most of these tunes…and we can hear them plenty.  I know The Source is a rock band – but I feel like they can also take those guitars potentially down a peg or two on the sound-boards on a cut like “Goodbye My Old Friend” in effort to let the rest of the idea breathe more.  It’s a tough trade-off and hard call to make…I wouldn’t want to jeopardize the gigantic crunch and sound of “Goodbye My Old Friend” as it’s mixed right now either – so I get where they’re coming from and why it’s so beefy…just something I think they can get away with experimenting with a little more in the future.  The guitars come out loud & confident in their melody – and I really do like that…but there’s also some really extraordinary and cool elements in “Goodbye My Old Friend” that tend to get overshadowed a bit in the loom of the bigness of those guitars.  Vocally – one of my favorite performances from The Source so far – they’ve written a great flow and delivered perfectly on the mic in “Goodbye My Old Friend.”

“Take Me Away” either has a completely different singer, or entirely different approach this time around.  Much lighter in tone…there are enough similarities in the style of the singing that I’m thinking it’s the same guy – but man, sounds so much different here!  I don’t think that “Take Me Away” can be faulted for trying new things…between the vocals and the Floyd-esque drifting in the sound of the instrumental sections, this is definitely different than what we’ve heard so far from The Source along the way of I Feel I Need.  Does it work though?  Honestly…not entirely.  Some of it works very strongly…and the parts that don’t, again, no fault on the vocals just because of the difference in approach…the song just has a melancholy and somewhat lethargic energy compared to the brilliant ways that The Source has been entertaining us so far.  I think if anything, it’s just a song that asks us to transition a bit more quickly than we’re ready to.  In my opinion, making a more gradual adjustment, like switching around “The Raven” and “Take Me Away” might have given “Take Me Away” more impact and a more logical progression to the sounds we’re hearing come at us.  “The Raven” is like that perfect in-between of the big giant rock-riffs of The Source and their slowed-down material in “Take Me Away.”  The low-end of “The Raven” is BIG…definitely noticeably big…but the atmosphere, rhythm and groove of “The Raven” is another addicting one to listen to.  Really great ideas in the percussion and distance/separation of the sound at the beginning of “The Raven” as it takes flight – great vocals, great imagery in the lyrics once again, concluding a solid introduction to The Source and their overall sound & ideas on their new record.

Put it to you this way…there’s room to grow.  Before you take that as any kind of slight on this band – recognize that they’re building the blocks and on solid-foundation to START – this is by no stretch a hopeless band, rather, one with the real potential to reinvigorate rock-music with a classic-vibe of real respect for the genre.  What I’ve heard so far on I Feel I Need suggests that they’re not out to reinvent the wheel of rock – they’re here to play some really damn good tunes, made in a style that all four-players sincerely connect to.  You can hear that connection in the tightness of these musicians playing together in everything I’ve heard – you can tell they’re beginning to find their sound, their place and what they can contribute to music.  Good stuff brewing here.

Find out more from their official homepage and have a listen at:  http://www.source-band.com

Tags: I Feel I Need Singles sleepingbagstudios The Source