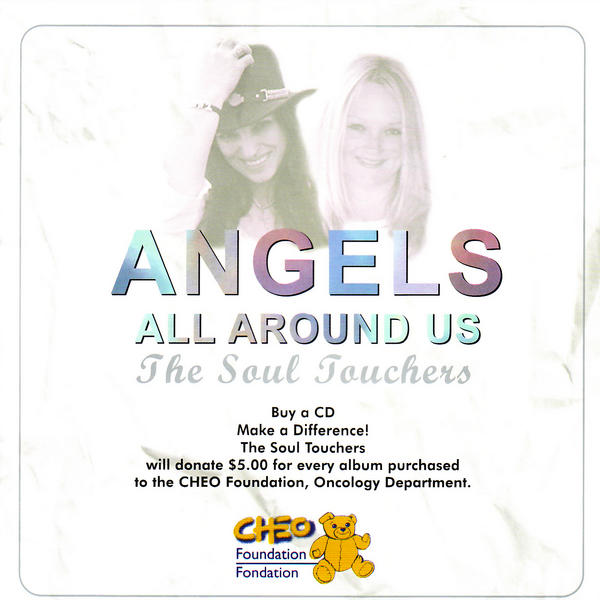 The Soul Touchers – Angels All Around Us – EP Review

Sweet intentions and music fuel the latest EP from the Canadian-based collaboration that combines the talents of songwriter TJ Way with the angelic vocals of UK-born singer/songwriter Erin Gannon Simms in a project they’ve called The Soul Touchers. Not even remotely kidding when I say there is more information on these two out there than a brain can handle – I’ve spent hours tracking down songs, listening, reading about and getting right into their latest EP, Angels All Around Us.

In a sense…this is one of those ‘tougher’ reviews to complete. Not only is this the first review we’ve published since the official move to Ottawa, Ontario – the very city where TJ herself is based and formed an e-mail friendship with Erin to start this whole project up…but also that for the most part, the songs would be outside of my normal audio-palette. As if that already didn’t stack the deck in favor of a tougher review – you factor in the religious sentiment and that’s another aspect working slightly against me; though religion/music is often one of my favorite topics to tackle in an interview, it’s quite rare that the music breaks through to my playlists permanently or with any longevity post the review process.

Or how about the ULTIMATE reason that a review can become difficult – the fact that The Soul Touchers have released these four new songs in effort to benefit children with leukemia!

All of these things combined…for the most part will send a chill down many a reviewer’s back…and unless they’re made of the strongest mettle – it’s going to be tougher for The Soul Touchers to obtain an honest opinion from the masses of independent journalists out there. I’ll fully admit…reading about this before even hearing it…the last thing I wanted was to not like what I’d hear – because THEN what? Do I stick to my guns and still be the honest guy you’ve come to for musical advice and somehow shun their efforts to HELP the world with their new songs on the Angels All Around Us EP, where a portion of the proceeds go to help the brave kids in the world who battle leukemia daily? How horrible would THAT scenario be? What kind of monster would end up printing something like that?

People make music for all kinds of extraordinary reasons…just like TJ and Erin have here. As the funk/soul based “Angels All Around Us” begins the EP – you can immediately hear the message and the importance they’ve placed upon this project. It’s got wild elements of R&B/Dance rhythms tossed into the mix, catchy within its hooks and a passion that becomes clearer with each passing second. That’s the good stuff…and you can include production and the work that’s cleverly gone into the songwriting and collaboration overall as well on the positive-side of what’s happening here on their title-track and EP-opener. Regardless of the message…they deserve a fair and honest review, just like everyone else that comes through SBS…and though I applaud the effort entirely when it comes right down to it…it’s also tough to not hear that the overall sound is still rooted a bit behind the current pulse of today’s music. That is not necessarily a bad thing…but again…once music has been tied to a cause…reviewers lose their nerve…and family/friends will have also lost it long before that point. With all the effort that you can hear has been put into “Angels All Around Us” and the core-concepts that drive the lyrics, performances and music – they truly DO deserve honesty from us all in return but the odds of receiving it will be low, low, low. I like the build of the song…heck, I even like the fact that it incorporates record-scratches into a rhythm where you wouldn’t expect to find them…but…by contrast, it does tend to sound a little like something we’ve heard in the sense that the composition is a little dated on this one. There…I’ve said it…I’ve opened the can of worms and now it can’t be closed.

Much of that sound…comes from the drum-machine beats that make it have that static-feel. You’ll more than likely notice it in the following track, “I’ll Be OK” as well – but even though it’s an ever-present part of the overall style/sound of The Soul Touchers, keep in mind at all times that, without it, this music would probably not exist at all! Songs need to be written…and collaborative efforts are some of the most challenging endeavors we can ever be a part of…and rather than grab an entire band to make a single EP over the course of a lifetime of arranging the collaboration to come together – TJ and Erin have forged their way ahead by making the most of their talents with the tools at hand. I have a sincere, TON of love for that…that’s the true spirit of a musician right there and they certainly embody that; if there’s music to be made, they’re making it, and whatever they have to use at their disposal, they will. Almost everything I’ve ever done, recorded or written myself has been DIY with whatever has been available…the important thing is that not having all-hours studio access, the greatest & latest instruments & toys or even having the most talent was never something that stopped me – and again, I think that these two should be commended for their efforts when you look at their music in that respect. “I’ll Be OK” leans a little more on the Pop-side of music with much more of a religious-thread running through the lyrics; that being said, I thought the melody of this tune was probably the major highlight in the four I’d end up listening to on this new record. Thought the singing was beautiful and that the words came out sounding incredibly sincere – and when you consider that the overall sound of “I’ll Be OK” almost sounds like something more akin to what Britney Spears would do, you’ve gotta appreciate that there’s even a single moment of identifiable sincerity. What they’ve created here on “I’ll Be OK” represents religion & heart in equal strength and also does a fantastic job of putting both the lyrics and vocals in a similar shining, beautiful spotlight.

If anything, of the four, I thought “Close Your Eyes And Dream” might have made the least of an impact on me personally. In a tougher spot after enjoying “I’ll Be OK” and its gorgeous melody – “Close Your Eyes And Dream” nearly has a Bell Biv Devoe-like rhythm to its repetition that switches up the vibe from more delicate to slightly more club. Keep in mind…that might be the switch in this record that YOU are waiting for…but for me I found that this one sounded a little further from the connection to the intent and lyrics. Still solid in the writing and the performances, production and mix…just not the highlight of the four for myself personally, which again I think is largely due to how impressive “I’ll Be OK” was leading into this third tune. I do like the somewhat loose-feel that the verse has more than the chorus…and that could also be part of it; to me there was little doubt to my ears that the verse of “Close Your Eyes And Dream” was outshining its chorus at least 2:1. We’re always expecting things to get better or take the song to that next-level when it comes chorus time…and I’m not completely sure that this one necessarily does that. I also don’t think that every song has to necessarily be written that way either…but I do strongly believe that each part of a song should somehow continue to pull our attention along with its movements and I felt mine would stray slightly each time I hit the chorus of “Close Your Eyes And Dream.”

Redemption comes through shining and sparkling at the end of the Angels All Around Us EP with “Take Me Away” – a song that TJ/Erin wrote purposely as a song that allows for a simplified, beautiful-break in the endless cycle of pain that many of us can get stuck in during the daily grind of LIFE. They’ve written this one smartly…perhaps a little more universally in terms of accessibility…the kind of song that’s a little less pointed in direction in the ‘who’ and more towards the ‘what’ of what a song’s all about. I can’t see many people resisting the energetic triumph of the music in “Take Me Away” and how well the vocal melodies sit within the rhythms. Erin does a solid job and justice to their writing once again with a truly inspired sound in this final performance that definitely sounds like she’s made that audible connection with the purpose and intent behind the music and lyrics. Also the most ‘updated’ in its sound…I’d say they’ve got a genuine chance at finding their way onto the charts with the bright energy of this final song and certainly a shot at making that memorable impact with YOU with this passionate moment of reprieve at the end of the EP.

Hopefully…you’re all still with me here. Regardless of how you might feel about any of the genres or styles they’ve chosen to take on throughout this four-song EP – the effort is a commendable one that shouldn’t be ignored. Both TJ and Erin clearly have hearts of gold in their intent and pursuit of this record’s message and I think they should truly be proud of what they’ve achieved here. As I mentioned…people make music for all kinds of extraordinary reasons…and these two have lent their talents to a collaboration that makes music without ego, as selflessly as people could ever attempt to write. They’ve made this record for the world…to help…to heal…and above all personal-preferences you might have – you KNOW that’s every right reason to give a record a spin at any time – so do that!

You can find it here direct: http://www.emusic.com/album/the-soul-touchers/angels-all-around-us/11223481/ and support The Soul Touchers at their Facebook page here: https://www.facebook.com/TJWay-The-Soul-Touchers-Music-Group-224939930889095/

Tags: Angels All Around Us EP sleepingbagstudios The Soul Touchers