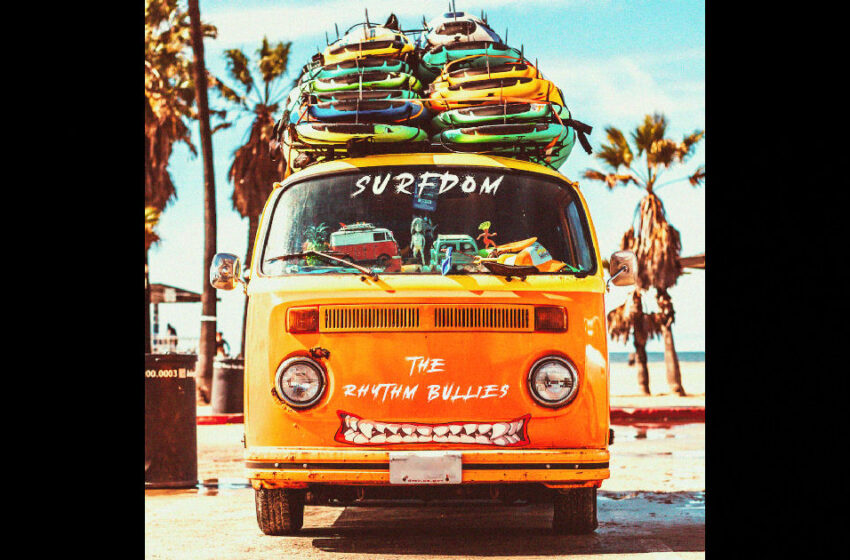 It’d just be downright strange to not hear at least a little twangin’ from the ol’ guitars if you’re gonna call your record Surfdom, right?  No worries on that – The Rhythm Bullies have got you covered right off the drop as their new EP begins with “Smoke Rings” and starts to work a mix of lo-fi Rock/Psych magic on ya.  I’m into it…there’s a rawness here that delivers a live-wire electricity to the atmosphere of this first cut of two…”Smoke Rings” has that feeling like it could absolutely explode at any moment, and cranks out a serious dose of power & energy as it plays on.  Before long, that moment we were looking for is fully revealed…we KNEW that it was coming SOON, and you’ll find it as The Rhythm Bullies trip on past the three-minute mark and proceed to SHAKE THE FREAKIN’ WALLS with all kinds of wicked instrumentation & musical badassery.  You get a decent sample of what this band is capable of in a single shot here…that ninety seconds spent without a word practically speaks just as loudly as the vocals do…perhaps with the exception of how the finale shapes out & how truly mammoth “Smoke Rings” becomes by the very end.

Lead by Sebastian Mogan,  you can feel that real Rock vibe at work as “Smoke Rings” plays out…you’d probably find The Rhythm Bullies carving out a niche somewhere between something like The Rolling Stones grittiness and the flash of INXS based on what you’ll hear in this first track.  All-in-all, it sounds like there’s a much more distinct edge to The Rhythm Bullies or a larger chip on the ol’ shoulder somehow…I like to think that’s simply a reflection of the sound of a band that has something to prove & is hungry for their moment, ready to attack…that’s what “Smoke Rings” sounds like to me – it’s bloody inspired when it comes right down to it.  The production on this cut is insanely interesting to me…I don’t often go into this stuff because everyone out there has different levels of access to equipment inside of the independent scene & professional studios etc. – but listen to the way this tune is recorded…it’s really something else to experience.  Normally when you’re hearing some air like you will at the start of “Smoke Rings” it’ll put some tension in the listeners for the wrong reasons…but I’d argue it quickly becomes the opposite effect here…this is using the live sound to their advantage, and it gives “Smoke Rings” an instantly mischievous vibe.  When you hit those solos though…that’s where the real proof is in the pudding, and with the clarity you’ll find rippin’ through your speakers from the lefts to the rights as the entire song ROARS to life with renewed energy…you have to assume everything you’ve heard along the way has been completely intentional.  Personally I think it was a good move…”Smoke Rings” proves that The Rhythm Bullies are choosing to rock specifically how they wanna rock, and bringing ideas to the table; not only through the structure & writing, but through textures, tones, and production values too.  This is a kickass cut…let there be no mistake about that or twisting of these words of mine – everything you’ll hear in “Smoke Rings” sounds like it is ALIVE and emboldened with the real spirit of Rock, 100%.  Raw like great Grunge, Garage/College-Rock too…it’s quite the clever hybrid when all is said and done.

Now…Houston…errr…or Nashville, as the case may be…we’ve got a slight problem here…but nothing that a couple bumps in the volume department can’t solve quickly.  There’s a bit more distance between the settings on “Smoke Rings” and “The Beachgoer” to follow than I’d imagine they’d like to have…but to be truthful, that’s also partly in due to the fact that The Rhythm Bullies went so damn LARGE at the end of “Smoke Rings” that the sound of the next cut seems to shrink in your speakers right away by comparison.  Anyhow…lots of time to sort that out if The Rhythm Bullies are feelin’ inclined to do so before the Surfdom EP gets its official release this April 15th.  I mean…c’mon…at the end of the day, what am I doing here?  I ain’t tellin’ anyone to turn it down – I’m sayin’ turn this on UP where it belongs!

Maybe that’s simply a testament to what The Rhythm Bullies are creating with “The Beachgoer” – like I told ya from the start, I’m into it – I think there’s an absolutely addictive mix between what you get from a live show and a recorded experience in the music being made by this band, and it’s genuinely exciting.  It feels unpredictable, even though ultimately they’re still sticking pretty close to the Rock script on “Smoke Rings” and the more Punk-influenced attack on “The Beachgoer” – there’s just something about The Rhythm Bullies that feels about as sturdy as an unstable nuke when it comes to the energy on display, in all the right ways if that can even BE a thing – and it’s seriously gripping…because you really don’t know where it’s all gonna go & everything’s comin’ atcha so quickly…the heat being generated along the way stands every chance of melting your speakers into a puddle of boiling goo…and you kind of end up wondering if you’ll survive the experience.  “The Beachgoer” has a wild live-wire vibe to it that you can completely picture setting off a whole crowd of people at the front of the stage into a frenzy of elbows and armpits…limbs of all kinds thrashin’ about, or dancing to a track like this with whatever random moves seem to come on out.  All it needs is a bit more volume in my opinion.  One way or the other, it’s gonna get it from me – either the EP will have that resolved for its official release or it won’t…I’m not saying I’ve got the end-all be-all opinion on what matters or what people are aiming for with their music…but either way, I’ll be turning up The Rhythm Bullies and blastin’ these two tracks from the Surfdom EP loud and proud, yes indeed.

Find out more about The Rhythm Bullies at the official website:  https://therhythmbullies.com