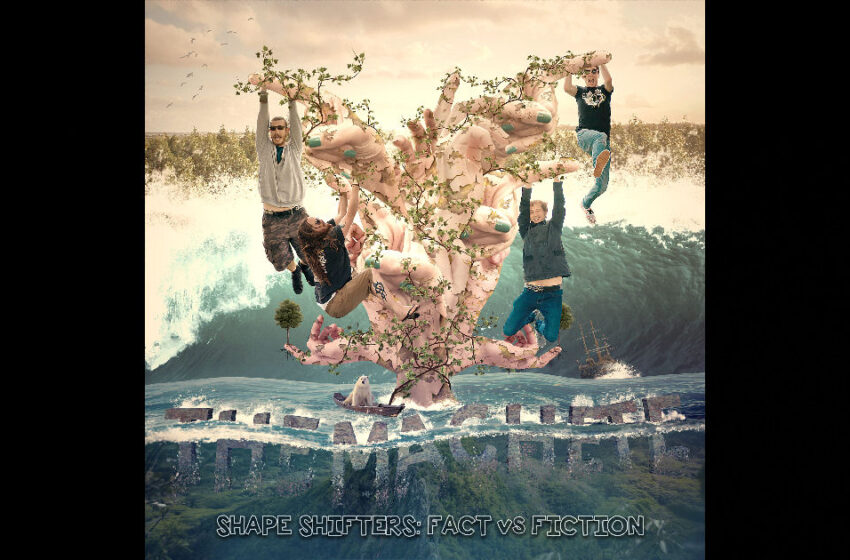 There are some characters you meet in this music-scene we share that ya never forget, even if it’s on a virtual basis – and there’s no question that The Machete has been unforgettable ever since we got introduced to them back in the day, reviewing their Take Dos EP in 2016.  We went on to cover’em the following year as well when they released their full-length record Chronicles Of Ridiculous in 2017 – and we’ve been missing this wild & talented crew ever since!  From what I can see out there online, they’ve been keepin’ active…depending on where you look online, you’ll find live albums, live singles, and recent tunes they’ve been pumping out fairly recently.  Make no mistake…no one needs to appear on these pages of ours for every single song & release…my world is a better place simply knowing The Machete is in full swing; if they happen to show up here in the process, then right on…our world gets even better!

Listening to them come out with as much flash & flare as this four-piece instrumental band creates on the opening track “One Eyed King And The Flying Guillotine” was an instant refresher/reminder of all the reasons The Machete has always been awesome, in addition to hearing how confident & strong they’ve continued to become over the years.  In one of those genuine cases of ‘you had me at hello’ – if you’re not feelin’ the funk of these bass-lines starting out “One Eyed King And The Flying Guillotine” then I feel nothin’ but sympathy for ya…because that first moment, right out of the gate, is SO BADASS…that I’m tellin’ ya, it’s worth the whole price of admission right there.  The Machete instantly stokes this fire and quickly gets it roaring into a full blaze, as only they could, in their own indisputably signature style.  By the time you tick past that first minute mark, they let the hooks come shining through and the energy reach its peak melodic-intensity; it’s not just supremely effective and ear catching in the way it’s structured – it’s got MASSIVE amounts of character and personality on display that’ll drop your jaws in amazement.  LISTEN to these guys around the 2:10 mark and the roll they’ll go on from there – it’s ASTOUNDING what The Machete are capable of, truly.  To think that you go from what seems like a relatively fair-paced & easily accessible jam, into this epic display of instrumentation & intensity combined…and you hear things like how precise they are as they rip through the frets throughout the third-minute before bringing it all together for the fireworks in the finale…I mean, c’mon y’all – what else could you possibly want other than what The Machete is giving you right off the bat in track ONE?  It’s danceable even, dare I say!  At least at points along the way.  I’m not gonna say you’re not gonna look super strange out there on the dance-floor busting moves to this…but I’m also not gonna say that if you DID manage to pull it off, that it wouldn’t be, like, super impressive.  Because dammit, it would be.  The character & charisma they put on display right from moment one…and how much the music of The Machete continuously changes shape on ya right as you’re listening…good lordy!  It’s 100% remarkable.

“Lost At Sea” packs in a fantastic dose of wildly cross-cultural sound & style…mesmerizing you with the pace, creativity, and layers of instrumentation shared between them.  To say a track like this is ambitious would be laughable – this is one of those songs that’s so much more than merely ambitious, it sounds practically impossible!  And therein lies the real magic of The Machete folks…when you listen for yourselves, and you hear this EP, and you try to follow the multiple twists, turns, and transitions they’ll make along the way throughout a song like “Lost At Sea” – I ain’t gonna lie to ya, you are going to STRUGGLE to keep up to them!  But if you’re not entertained by this as well, I’d be truly amazed…and why that is, is BECAUSE I’m truly amazed – The Machete will pretty much blow your mind every time they bust out a new set of tunes, and the radness of this entire EP’s lineup speaks strongly to back that up.  Not ONLY that…but for as fundamentally complex as a track like “Lost At Sea” absolutely IS – the fact that The Machete can maintain such a high degree of accessibility in their sound and pull us all in to listen is a genuine achievement of its own that somewhat defies the odds.  Instrumental music is hard enough to get more than half the population to listen to to begin with…you factor in the fact that it’s not your average everyday run of the mill instrumentals, and now you’re in a whole new field of niche listeners…yet I’d be absolutely willing to bet that the way The Machete makes their music will surpass everyone’s expectations…you simply cannot resist how much LIFE there is running through their tunes.

The REAL question is…is there an easily identifiable favorite on this three-song EP from this four-piece band?  And the answer…is no!  It’s a pretty firm no really…because every single cut on this record shines like a freakin’ flawless diamond on its own, and combined this EP stacks up fast into one absolutely killer experience from start to finish.  I’ll admit, the final grooves & moves flexed throughout “Claustrophobic Feet” is MAYBE about as close as I came to feeling 1% stronger towards any one song…but I mean, we’re splitting serious hairs dear readers, dear friends.  If you like The Machete and the music they make, you WILL like ALL of the music The Machete makes, full-stop.  I think if anything, “Claustrophobic Feet” might have a slight edge in accessibility and the definition of its main hooks…there’s a ton for people to latch onto in a song as expressive & impressive as this is, and I highly suspect they will!  This last cut has just enough of a spark to it that it’ll lift up this lineup just that much more to people listening…I can tell ya firsthand, they’d start firing up the percussion towards the third-minute & gettin’ straight wild with the instrumentation…and with only a minute twenty left to enjoy from there, it was never enough, and I’d repeat Shape Shifters: Fact Vs Fiction all over again.  Happily, I should add…just in case you didn’t catch that somehow.  Then I’m right back into the bass-line grooves kickin’ out the jams to start “One Eyed King And The Flying Guillotine” once more, and I’m right back where I started, captivated & hooked on the sound of a band that puts in the effort truly worthy of all the attention you’ll end up giving’em.

I’d by lyin’ to ya if I said I didn’t expect big things when The Machete comes around…this is a highly capable crew stocked full of extremely talented musicians…not just your typical players, but true innovators of their instruments.  The Machete is the kind of band built on the spirit of pushing the boundaries & limits, seeking out new challenges, finding exciting combinations of sounds, and taking all-out different ways to approach what they do…and they do this all the while keeping us entertained in the process and satisfying their own artistic needs at the same time.  They’re one of those real gems out there in the independent music-scene where the quality in their music easily rivals or surpasses that of which you’ll find in the mainstream – but if we’re talking ideas, abilities, execution, innovation, and imagination…then there’s no real comparison to be made in that regard – The Machete takes top prize.

I mean…even the artwork is awesome!  They’ve left no stone unturned in their pursuit of creating purely engaging entertainment, they never drop their focus, their dedication, or let their confidence dip for even a second – The Machete crushed it track after track after track on Shape Shifters: Fact Vs Fiction.  It’s officially released on November 14th this year – mark your calendars & get ready for this EP!

Find out more about The Machete at their official website at:  https://www.themachete.co.uk