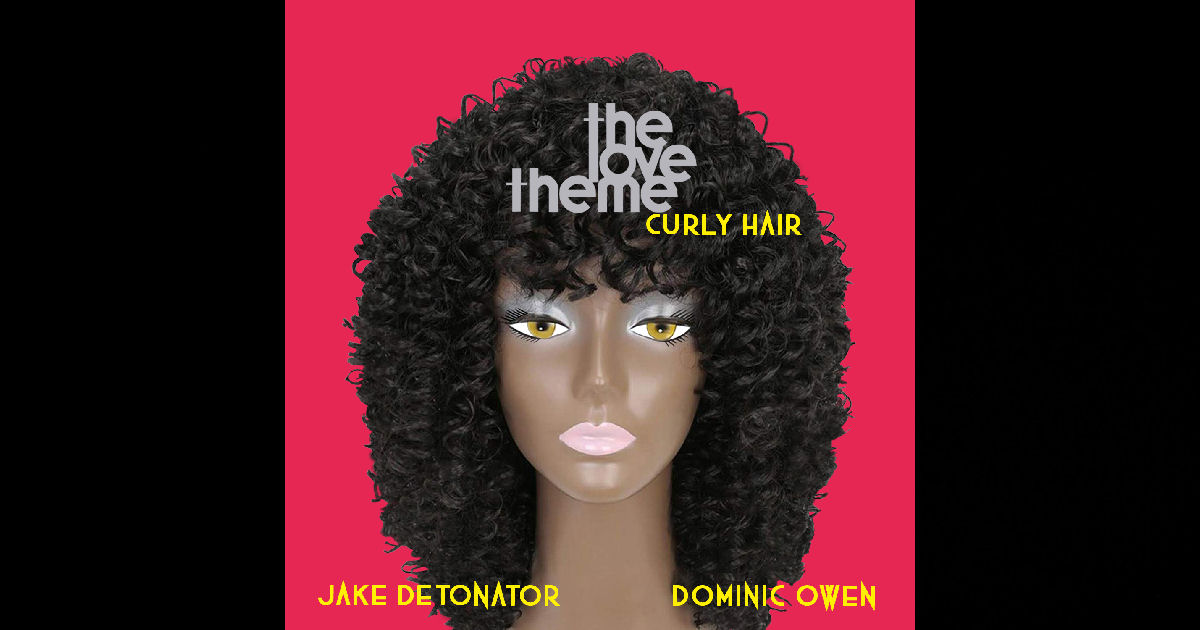 Back in May this year, we had the opportunity to check out this single in its original form, discovering one of the most upbeat & fun tunes of 2019 with The Love Theme’s “Curly Hair.”  It was bouncy, it was playful, it was genuinely entertaining – it still IS all these wonderful things; but just like we’ve said around these pages of ours many times, a great song has the potential to live multiple lives.  Whether it’s through cover versions over the years to come from other artists or bands, or sending your cuts out to the club DJs to get’em remixed, retooled, re-spun, revamped, and recharged – if you’ve got something solid on your hands when it comes to music, put it out there into the world in every way that you can, I bet you’ll be stoked & surprised on what you might find coming back.  Case in-point of course, The Love Theme should certainly feel that way – these new remixes came out freakin’ fantastic!

The talented ears for sound of both Jake Detonator and Dominic Owen, (the latter of which is a known collaborator with The Love Theme which we discovered back in early 2018 through a remix they worked together on called “Dope Pusha”) end up leaving remarkable stamps of their own on “Curly Hair” by really getting right into the nuts & bolts of this song to make it an all-new experience for one & all.  You’ll get plenty of what you love about the original still – but chopped-up, spliced-in, and placed into the mix in brilliant new directions…the moves these two featured guests are making on these remixes enhance the experience and give a great song two more verifiably exciting ways to catch your attention.

You’ll notice how each track deviates from the original as well, right from the drop – both Owen and Detonator deploy unique intros that immediately get you interested.  Take the “Curly Hair” remix by Jake Detonator for starters…like…when the intro began, and ended up with this spectacular old-school vibe leading the way…where the words finished with “you can’t judge a book by its hair” – not only did it make me chuckle on the way IN to the song, it’s insightfully well-suited for “Curly Hair” and it definitely sparked my curiosity.  So…y’all know me…I got on my Google-machine to see if I could figure it out – and if I’m not mistaken, the sample you’ll hear comes from a comedy team that existed in the late 60’s-70’s, known as The Credibility Gap, they put out several records…and on their third called A Great Gift Idea, there was indeed, a song called “You Can’t Judge A Book By Its Hair.”  Incidentally…The Credibility Gap featured well-known names like Michael McKean and Harry Shearer…just in case any of you trivia hounds wanna take that knowledge out to the pub and get yourself a free beer one day.  And YES I’m going on & on about a ten-second or-so part of the song, but that’s what really listening & getting into the music is all about…you gotta follow these artists, bands, and remixers down the rabbit-holes they provide ya with.  Jake’s variation on “Curly Hair” brilliantly uses the D&B to its advantage…killer bass-lines, tighter-than-tight beat…and a seriously impressive use of the vocals comes along with it all.  Combined with the wild & bombastic electro that continually makes its presence known throughout this remix, it’s the extremely clever way that Detonator has put the words into this cut, bringing key elements like the laughter to the surface, which raises the level of fun up even more somehow!  Let’s not forget – The Love Theme’s “Curly Hair” was already a whole lotta good-times to begin with, that’s facts – but I gotta say, hearing these remixes…I think we can all agree there was clearly still a whole bunch more good-times to be had!  From the vocal-samples to the record scratches, the “Curly Hair (Jake Detonator Remix)” immediately brings huge doses of cool to your speakers…sliding right into those bass-grooves with an “ahhhhhhhh yeah” vocal-line that basically says it all right there.  Somehow, that’s exactly how I feel about this too.

As far as the “Curly Hair (Dominic Owen Remix)” is concerned, we’re talking about equally solid ground – which is just about all the proof you need to know the original had it all goin’ on too…this is now the third successful variation, no doubt about it.  Owen reaches towards more of an organic spin on the electro-vibe, assembling this remix with a heavy slant on the instrumentation and the smoothness it brings to the song.  Building from the ground up with bass, scratches, samples, and a sweet beat to keep it all kickin’ strong as sunshine – Owen brings the heat with precision & flair, adding in key elements like the guitars or cymbal crashes in at the perfect times to bring the melody up to the surface, shining as bright as can be.  Fully admit…the movement on the bass, guitars, and drums, count for a ton when it comes to just how much of that good-good sound you’ll find sliding through your speakers on the Owen remix…he’s got “Curly Hair” tuned-up into one of the more inviting vibes you’ll find this year for sure.  Using the incredible drum fills and delightfully bendy guitar notes to his advantage, Owen expertly steers his take on “Curly Hair” into a designed-for-summer set of fresh vibes that fuse Jazz-Hop into the atmosphere in the most purely accessible ways.  The people are gonna move to this – no question about it, no doubt, there simply ain’t no arguments to be made there – this is a song people will love in all forms.  Proving you really can’t lose with “Curly Hair” no matter what version you listen to it in, while at the same time revealing just how much there is to explore within the depths of a single great idea, The Love Theme should be seriously stoked on just how well these remixes came out – I know I am!

Find music by The Love Theme at Soundcloud here:  https://soundcloud.com/thelovetheme