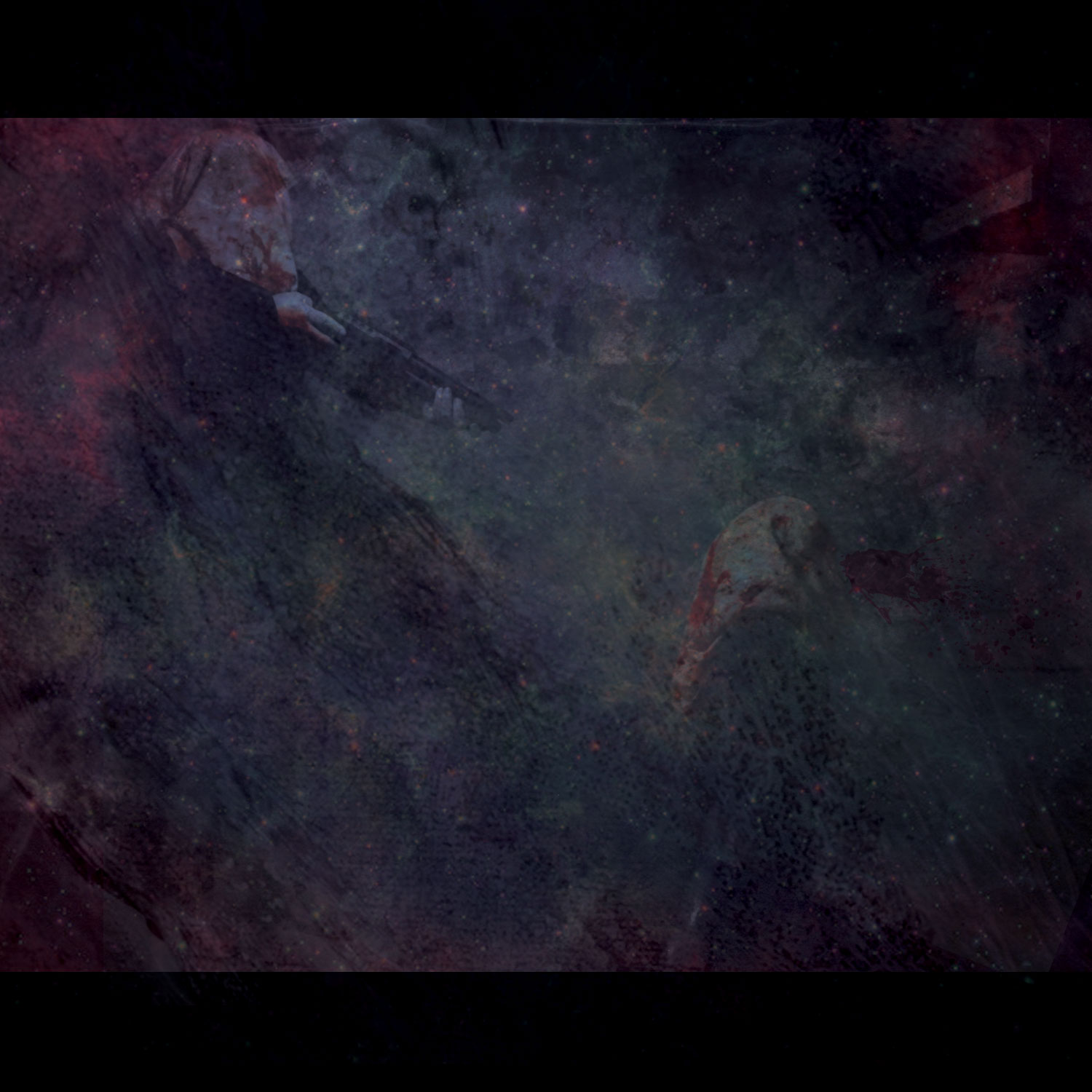 Happy birthday to our man Chris Romans of The Last Surrealist, the singular musical-mind responsible for the music made in his project; I say happy birthday sincerely…but I make sure to say it twice as the odds are, this might be the last moments of happiness for the next short while. Romans is known to make true music/art combinations that reflect the inward, darker-thoughts on life we often think…and what makes his music standout to me is just how unafraid he’s been in the past to make music that puts his full thought-process and feelings on display. When we last checked in on him…Chris was doing OK…he had just made an album we reviewed called Post Life Music, which largely dealt with the recent tragedy in his family that resulted in the early, unfortunate death of his sister. The album was astoundingly, brutally honest about how he was feeling…he put it all on display…but perhaps like the seven-stages of grief might suggest…he was still in the angry-phase; much of the music on the album was a stark, bold reflection of that personal loss and to be truthful…I didn’t quite know him well enough at that point to know for a certain fact that he could find a way through it all. After hearing the emotion laced into the punishing sounds on Post Life Music…I found myself genuinely caring about whether Chris Romans would continue to be on my planet…somewhat worried that he might not be for long.

I kept an eye on him…I even began a letter to him personally that actually still remains on my desktop to this day, waiting to be finished. I suppose I felt the need to write to him to let him know he should keep going…it wasn’t to say life gets any better, or promise him everything would be okay – how could I? But it was certainly the beginning of an effort to reach out and at least explain that he exists in my world…that the music was something of importance to me…that someone had heard his words, truly. And as time went on and SBS became a busier entity…I’ll admit…that letter began to collect its dust when perhaps it shouldn’t have just yet…I was still uncertain of how fragile Romans was/wasn’t after experiencing such an unfortunate & tragic event. But as the clock continued to march along…it wasn’t too long before Chris hinted at recording once again…the beginning stages of Hypogean Blood Fractals For A Hypnagogic Sleep…and I suppose that’s when I knew he’d be just fine. This is a man…I don’t know if he’s out there making music each and every day…but I can tell you that when he’s making the music, this project absorbs him entirely, like his soul is a sponge and he’s determined to take the pain and let us squeeze it from wet to dry. If he was focused on the music…then there was a chance…a small fraction of a percentage that perhaps someone as strong as Chris is could still find a way to function by communicating and expressing himself in the music.

And I’ll tell you this straight-up before we even discuss the first tune…if you already KNOW the music of The Last Surrealist from the previous years…you are in the exact same boat I was in…the one that was NOT expecting to hear such amazing and graceful sounds on Hypogean Blood Fractals For A Hypnagogic Sleep replacing the in-your-face brutality and grind of much of Post Life Music, the album just before. The switch is not only extremely acceptable, more accessible in tone & atmosphere – but it continually reflects the true capabilities within Chris – he’s created some incredible moments on the five songs on this album and truly shown immense versatility in his writing, style and ideas…versatility and an understanding of the freedom of creativity that others would kill to possess if only for a moment.

I wonder if I discussed The Cure with Chris in the past…I find a lot of similarities in the lyrical content and how he reveals it…especially in a track like “To Lie With Beauty On Empyrean Shores.” The longest song on the album at nearly ten-minutes in length…this song shifts with the energy of your own heartbeat; The Last Surrealist has some of the most beautiful moments on the record within this tune’s instrumental sections. Combining multiple ideas, tones and atmospheres…”To Lie With Beauty on Empyrean Shores” is like five-songs under the umbrella of its overall ambition – and once again I think this adventure and journey in music truly pays off here for Romans – this is a captivating slow-burner. The additional backing vocals are fantastic against the whisper of the main, the music remains enchanting throughout, audibly charming against the contrast of the dark, whispered vocals. Bright guitars…sweet harmonies…I mean…these are all descriptions of sounds that we wouldn’t have exactly rushed to use in describing his last album. It’s unexpected…but also incredibly well put together, conceptualized and performed – and with its additional melody-lines brightening the attitude in the music overall – what Chris is creating on Hypogean Blood Fractals For A Hypnagogic Sleep is something I found I was ready to take in and accept a little more easily. Lyrically, Chris remains quite rooted in the dark as he wanders through his psyche and recalls much of the tragic incident that changed his life completely within the words of “To Lie With Beauty On Empyrean Shores.” Contrast is a constant element written purposely into his music on either of the albums I’ve heard…and I wouldn’t have it any other way.

Taking us into his most club-friendly beat…

…okay…that’s not even remotely true and I can’t even continue that without laughing at my own joke. Chris is in on it with me…he knows he hasn’t made a single thing ever designed for the airwaves – and also like me, has determined that the greatest reason to make music is to express what’s within, regardless of whoever may/may not listen…ever. “You Can’t Quantize My Feelings (Drifting Through The Petricor)” is an example of how anti-mainstream this dude really is. Musicians…we LOVE this kind of stuff…radio, marketing & ad-execs…not so much…

This third-cut on the album is supremely orchestral in parts…the skill in assembly, production, composition…it all clicks in better than ever as this track shifts into its final two-and-a-half minutes after its slow, hypnotic build-up. “You Can’t Quantize My Feelings (Drifting Through The Petricor)” is definitely one of the more unique ideas within the album itself and really has a way of taking you away, drifting in thought throughout the stunningly-assembled instrumental music that combines smart samples of nature within…it sounds like the audible-form of the sun attempting to stop a storm brewing and breaking, swirling and enveloping…and eventually yielding to let the rain fall.

Again…I can’t stress this enough…”I Surrender All Holy Blood” would not have been able to exist on the record before this one…its gentle nature wouldn’t have had a place on Post Life Music. But here on Hypogean Blood Fractals For A Hypnagogic Sleep it couldn’t fit more perfectly. Any of you out there still left wondering whether or not Chris could make music a little more ‘straight ahead’ still aren’t going to be rewarded with verse/chorus/verse here – but if you can’t hear the melody in this tune and how he shapes it so purposefully to do what it does and KNOW that he could easily be making songs with three-chords and an audible-handjob at any time if that’s what he ever wanted to do. Thankfully…it’s not…and we get songs like “I Surrender All Holy Blood” and the supremely beautiful ending to the album, “I Met God In The Caves To Xibalba. She Told Me To Surrender. So I did…” Does it get any more sincere…any more beautiful than this innocent-sound to the ending of this album? Spread-out…worn-thin and hollowed…this song is sparse in its assembly and structure…and as a result each second that ticks by is astoundingly clear and pulls you in close to listen.

Experimenting with the auto-tuner even…listen to the exceptionally-clever way it weaves his vocals into the piano-melody from the 3:30-4:30 mark in the song. I honestly think I loved this final tune more than any other on the record even though I do my best to not single any one tune out in a composition as comprehensive and cohesive in idea, concept and performance as this album is. “I Met God In The Caves To Xibalba. She Told Me To Surrender. So I did” is low-key, understated…and a completely gorgeous ending to this exquisite set of five new songs.

Chris Romans is an exceptionally talented and visionary artist…whether he believes that himself or not. But this ain’t just birthday-lovin, I can assure you…I’m not here to rub-nuts in writing…you know I tell ya like it is, all the time. Just like Chris…I’m strongly possessed by my art and my vision…and it drives me to keep it pure, untainted and REAL each and every day. He’s certainly proven to be an artist with limitless capabilities on this new album – Hypogean Blood Fractals For A Hypnagogic Sleep is the album that should be heard by the masses – yet has no vehicle to it through the mainstream.

Presumably…that’s why you’re here reading right now…looking for that alternative to ignorable, easy-to-digest radio-music…hopefully you’re looking for something unique that digs into your gut, mind and soul permanently…music that makes an impact, because it’s REAL.

It doesn’t get realer than Chris Romans in The Last Surrealist, I assure you.