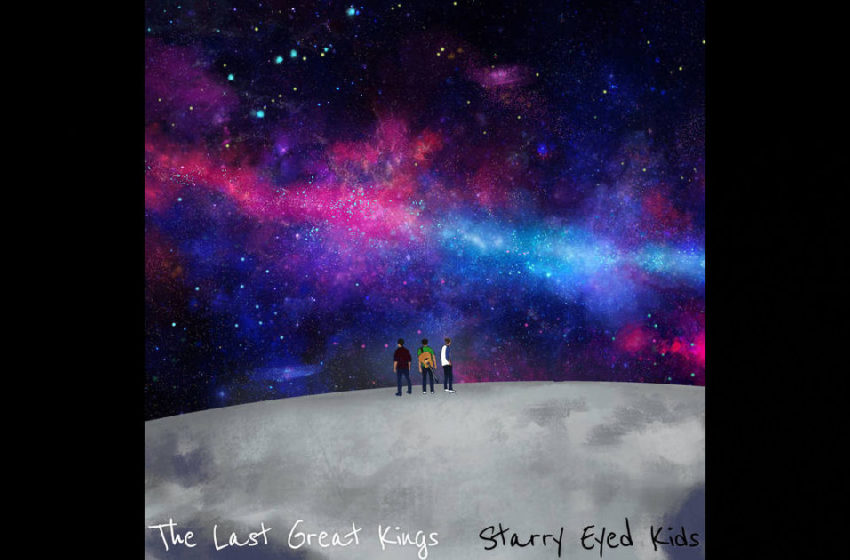 I’m here to talk about a sample set of select tunes from this new record Starry Eyed Kids today…but make no mistake, even though it ain’t one I’m discussing here in review, right from the moment that “A Musical Thing (Intro)” on this album began as I snuck a peek into what else might be on this album aside from the singles I’ve got…I knew we’d be in for something special here.  I’ve gone on to discover several tunes throughout this record, from its title-inspired cut to key melodies like “Day By Day” – The Last Great Kings are making Indie/Folk/Pop that’ll last & hold-up…really enticing stuff all-around.

While if it was up to me, I’d probably be shipping around “Starry Eyed Kid” as a first impression to the people out there, “Seasons” is still a solid cut to go with, which is where I started officially.  I mean, if I’m being truthful, I really haven’t heard a tune on this entire record that I didn’t enjoy on some level or another, so…I suppose it all comes down to our own individual taste.  For me, those seriously emotional & melodic vibes that gently sooth the soul through “Starry Eyed Kid” and the incredible vocals that come with it – that’s what connects to me personally…I think they’ve written a beautiful song that’s certainly a highly memorable moment early on in this record.  As far as “Seasons” goes, it kind of has that quaint, humble, & real vibe that you’d find in something like The Decemberists, which is certainly cool with me.  Best way I can probably put this, is that they move collectively, unified in their movements throughout “Seasons” and pull it off flawlessly – but with that being said, you’d definitely notice if they didn’t.  The Last Great Kings aren’t pushing their luck or the envelope on “Seasons” – I wouldn’t go as far as to say they’ve played this first sample from the set on the safe-side of things, but that’s kinda the case.  I’m assuming it’s not intentional…”Seasons” has a very natural flow that suits them well – like I said, they play it like they own it, and at the end of the day, that counts for a ton.  It’s inviting, it’s comforting, it’s warm…lyrically, “Seasons” packs a gentle wisdom and poetic imagery that stands out for all the right reasons, and even though it’s a delicate tune overall, it’s got character, heart, and hooks that’ll draw people in to listen.  Friendly vibes in this cut…”Seasons” is like the audio equivalent of good company or acceptance…the comfort of knowing things are gonna be just fine and that together we can ride out the storm until that next sunny day.

I absolutely LOVE the way this next cut begins – the guys in The Last Great Kings will make a huge impact immediately with the charisma & charm they bring right to the surface, and a song like “Wow, That’s A Lot Of Jet Skis” is guaranteed to have you appreciating what The Last Great Kings bring to their music instrumentally, but also especially when it comes to the lyrical aspect.  They’ll drift between serious & lighthearted vibes throughout the words of this second cut from the sample set off of Starry Eyed Kids and pack in a tremendous amount of’em throughout its length – but we’re talkin’ good-time vibes you’ll definitely want more of.  This is a really well-crafted cut that speaks directly to just how much effort & detail is put into the songwriting of this band…don’t let their mellow vibes fool ya, they put the work into these tunes & “Wow, That’s A Lot Of Jet Skis” certainly reveals a ton of skill & heart in their sound.  This completely hits the mark though – lyrically, it’s going to grab just about everyone’s attention out there, because you WANT to hear the whole damn story – I mean, “Wow, That’s A Lot Of Jet Skis?”  You WANT to know what the heck that’s all about, don’t ya?  Do you get that answer through the words you’ll hear?  Arguably, kind of – I wouldn’t say that you don’t…it’s a tale likely based loosely around a unique experience with life & love, with several references that are probably written around the situation in some way, shape, or form.  Whether we’ll get them all, or if their more for the people on the inside of it, I don’t know if that really makes too much of a difference here really – I think people will really dig this cut and the personality you’ll find in both the music & vocals of The Last Great Kings here.  Incidentally…on the official list of songs for Starry Eyed Kids, this tune will also slide right into the beautiful melody that drives “Day By Day” to follow…another humble song from the set you’ll find on this record and another great tune from The Last Great Kings with fantastic harmonies.  Just sayin.’

Puttin’ some serious pep in their step, they start stompin’ it up on “Death Or Glory,” nearly sounding like an acoustic version of Green Day at their happiest.  The Last Great Kings definitely have a massive advantage over other folk-indie tunes out there with what’s happening on the microphone with Tommy O’Connor in this band – I’ve enjoyed them throughout my time listening, but I think you’ll probably find some of the best of their sound right here at the end of this record – “Death Or Glory” is a whole lot of fun to listen to.  Soothing in its own way really…everything just sounds…so…so RIGHT here – this vibe completely suits The Last Great Kings and you can definitely hear just how into it the entire band is from the bass-lines of James Coyle continually kickin’ it up, to the energetic beat of the song provided by Cameron Marr, & the clever vocal-samples in the mix as well – “Death Or Glory” is as innovative and creative as it is straight-up enjoyable to experience & listen to.  I dig how O’Connor writes his lyrics, he adds a ton of insightful details that’ll turn a good story into a great one every time he sets his mind to it from what I can tell through these samples & other songs I’ve checked out on Starry Eyed Kids – that’s certainly the case here once again at the end on “Death Or Glory.”  Melody reigns supreme here, but so too does the uplifting energy that you’ll find on this last cut…it’s the pop-rock equivalent of the Braveheart speech that’ll give you the inspired sound & audible vitamins you need to face whatever battle you’ve got in front of you today.  Pay close attention to the socially conscious vocal samples you’ll hear…not only do they play a huge role throughout this entire record, but you’ll really dig what’s being said through these moments in the music of The Last Great Kings.  Like I said at the beginning, check out the freakin’ INTRO of this record, every time I looped around to the beginning of Starry Eyed Kids with “A Musical Thing (Intro)” starting up the whole experience all over again, I was 100% FASCINATED by the way this album opens…and a ton of that is due to the incredible samples they’ve discovered & used.  And of course, with them being inserted at the beginning & end of their record, you’ve gotta assume that they’ve been used to make several points & add a unique level of cohesion to their album in the process…so listen closely…bands like this wouldn’t even include something like that unless they wanted to draw attention to something important that you should take to heart.  I definitely dig what I’m hearing in The Last Great Kings…I know it’s early on in their career & I get that, there’s still room to evolve – but the sheer facts are that they’re already getting a tremendous amount of things completely right already from production to performance.  The people out there will rally for a sweet set of sincere sounds like you’ll find coming from this band though, I have no doubt about it…and I wouldn’t blame them at all – The Last Great Kings design songs that move fluidly with rhythm, melody, and extremely well designed lyrics & vocals…it’d almost kind of be strange not to dig on a sound like these guys have.

Find out more about The Last Great Kings at their official page at Facebook here:  https://www.facebook.com/lastgreatkings