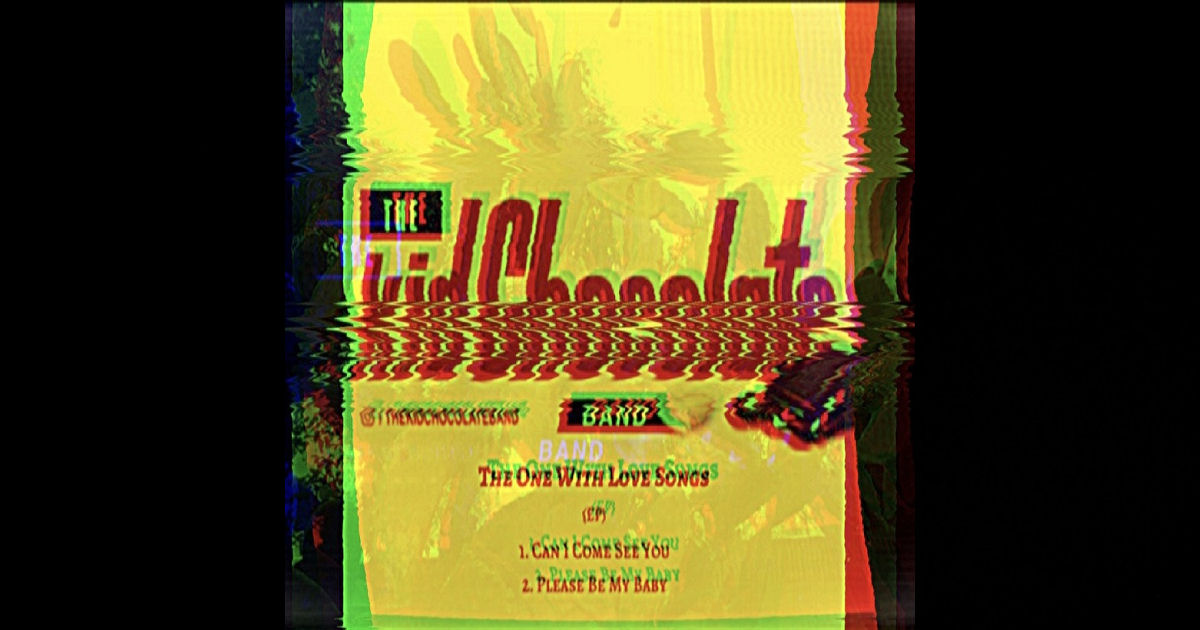 The Kid Chocolate Band – The One With Love Songs – EP Review

Little is known about this band out of Long Beach, California…in fact, aside from their location and the assumption that the four people in the photos I can find are all in The Kid Chocolate Band…not too much else I can tell ya about this crew aside from what I’m hearing in the music.  From what I can see, they started releasing material online with a handful of singles being released last year – and now they’ve just put out their brand-new EP, The One With Love Songs, which…I’m guessing would make it their official debut?  We’ll go with that…for now…maybe…those other previously released singles all share the same cover photo but the songs are put out individually…so I’m a bit suspicious.  There’s a few oddities in that sense that you can find when trying to piece this puzzle together – take the instructions on their Facebook page to click the link in the bio to check out their EP & video etc. – like, what bio and what link homies?  Fix that up yo – the people need to get to the music!  Suppose they can Google it…but c’mon!

At least that’s my opinion – I love this lo-fi indie-pop/alt-garage rock stuff and basically have since I found out Superchunk was a thing way back in my day.  The Kid Chocolate Band combine the old-school melodies of the 60’s & surf-era, much in the same way that you’d find Weezer or Fountains Of Wayne working those sweetened, playful vocals into their music…only with like, the sonic textures and indie approach of bands like The Breeders and Bojack Horseman…errr…I mean Band Of Horses, but you know, at their most punked-up & fuzzy moments.  Much like Built To Spill or Superchunk as well in some respects…if you think of how much of a role their guitars play in providing just as many hooks to the music as you hear from the microphone, The Kid Chocolate Band works a similar kind of vibe with just as much raw energy and straight-up passion.  The One With Love Songs EP is the exact kind of record I love to crank right up to hear the uniqueness in the production and the sparkling melodies they’ve threaded into such a thrashing sound; this stylistically-cool set of two songs gets me amped right the fuck up.

I’ve had the good fortune to check out some really awesome opening cuts on records & EPs over this past couple months…people be steppin’ up their track #1 game, no doubt about it – and The Kid Chocolate Band can now become part of that elite club, because “Can I Come See You” is pretty much all I wanna hear all day long.  Not even kidding – I’ve got this up just about as loud as it can go because I seriously love the sound of this band and the energy they put into this first tune on their new record.  Are some people going to find the production brash in comparison to perhaps how sweet a melody like this could potentially be smoothed-out to become?  Sure.  Are there just about a bazillion fans of ‘college-rock’ and bizarre indie oddities that would absolutely be rabid over this?  You bet.  The Kid Chocolate Band has chosen to rep that tin-laden, treble-up, old-radio sound and they wear it like a badge of honor in playing “Can I Come See You” – whether or not you’re a fan of that particular style or not, you gotta admire the heart, passion, and enthusiasm these guys play with.  To me, taking an innocent melody like you have at the core of a song like “Can I Come See You” and its love themes, then finding a way to get gritty with it all and dirty it up adds a ton of personality, depth, and character into the entire vibe…it’s a smart move because the contrast works so brilliantly when we listen.  Our ears dig for the spot-on melody from the vocals…in the process you can’t help but get right into the rumble of the bass & guitars and wild drum beats that keep this cut flowing so ridiculously well.  They’re going to run into people that don’t ‘get it’ I’m sure…I can hear that, and I get it, it’s the nature of sound that’s fuzzier than a peach is…that’s just how some people hear that kinda stuff…they’ll get their share of dumbass comments from people that don’t get the style of music they’re going for, whatever.  Those that do ‘get it’ in my opinion, are really going to freakin’ love this band.  “Can I Come See You” is full of blissful Pop tendencies and just enough Punk spirit to pull in a massive range of people; and again for those that love their alt/indie stuff, you’re pretty much guaranteed to love this first tune.  The guitar solos in between the chorus & verses around the first minute and later on around the 2:20 mark?  Don’t even get me started.  Straight-up, the texture and tone on the guitars is so vibrantly colorful, raw and rad, it’s easily one of the most badass sounds I’ve heard this year…loved it.  Loved the drums in the breakdown around the two-minute mark…the clever uplifting energy in this vibe never quits.  The vocals continually stood out to me as well…I really think they’ve got a great singer underneath all this fuzz and personally, I love how they’ve got him wedged into the music like The Strokes would do…perhaps a bit more audible than Julian tends to be, but let’s face facts – everyone is no matter how hard they try to melt into the mix.  Bottom line is they’ve got the vocals within the music, not above it, not hogging the spotlight out in front…it’s sitting right where you’d want it to be on “Can I Come See You.”  Killer cut.

If you thought the sentiment on “Can I Come See You” was sweet though – wait ‘til they pour on the syrup throughout the lyrics of “Please Be My Baby” – cause that’s what sugar sounds like.  I mean…if you read the title of the EP, you knew what you were in for – this is The One With Love Songs after all right?  I’ll admit that I wasn’t quite as obsessive over this second tune in comparison to the first – BUT – it wasn’t that far off, there’s a lot going right here again on “Please Be My Baby.”  First off, I think the bass gets a much better spot in the mix to make an impact and you can really hear how it contributes to the wild melody, rhythm & flow of this cut…dude’s rippin’ it up back there.  I love the choices made on the guitars once again and think the tones are once again as superior to listen to as it can get; sometimes I’d listen to this tune and specifically just concentrate on what’s happening there…cause it’s got such incredible texture – I know I’ve used the word several times already, but it truly applies.  You can practically reach out and touch these sounds…you can hear the clarity in the tremolo-laden sound and how it warbles so magnificently in the heat of all the thrashing drums & cymbals crashing around them.  I also think there’s an argument to be made that you even get a better performance on the vocals on “Please Be My Baby” – that additional energy & rasp to the edge in the singing hits the mark dead-on.  At the end of the day, I still think “Can I Come See You” is a stronger tune overall writing-wise perhaps, but like I said, plenty of redeeming qualities in this second track from The One With Love Songs EP.  Most importantly, they kept the focus & sound intact and the energy completely through the roof – I fully believe that a ton of the appeal in the music of The Kid Chocolate Band comes from just how much they’re clearly enjoying playing these songs…it absolutely makes us want to listen.  The enthusiasm is contagious, the songs are both heartfelt and fun, the entire sound is identifiably unique unto themselves despite the comparisons I’ve made along the way – I could pick The Kid Chocolate Band out of a lineup of songs with no titles without hesitation.

And whether this is their first official EP, their second or even their third – to be that recognizable already is quite an achievement.  I think these guys crushed these two songs – I ain’t gonna lie, it flies by all too quickly, but it’s definitely the kind of energy I want pouring through my speakers all day long…and that’s what the ‘repeat all’ function exists for, as I like to remind us all from time to time.  You’ll want to check that box when listening to The One With Love Songs EP…The Kid Chocolate Band delivers a memorably sweet highlight of 2018.  They’ll make you want more of this stuff for sure – I’m already looking forward to the next EP.

Tags: EP sleepingbagstudios The Kid Chocolate Band The One With Love Songs