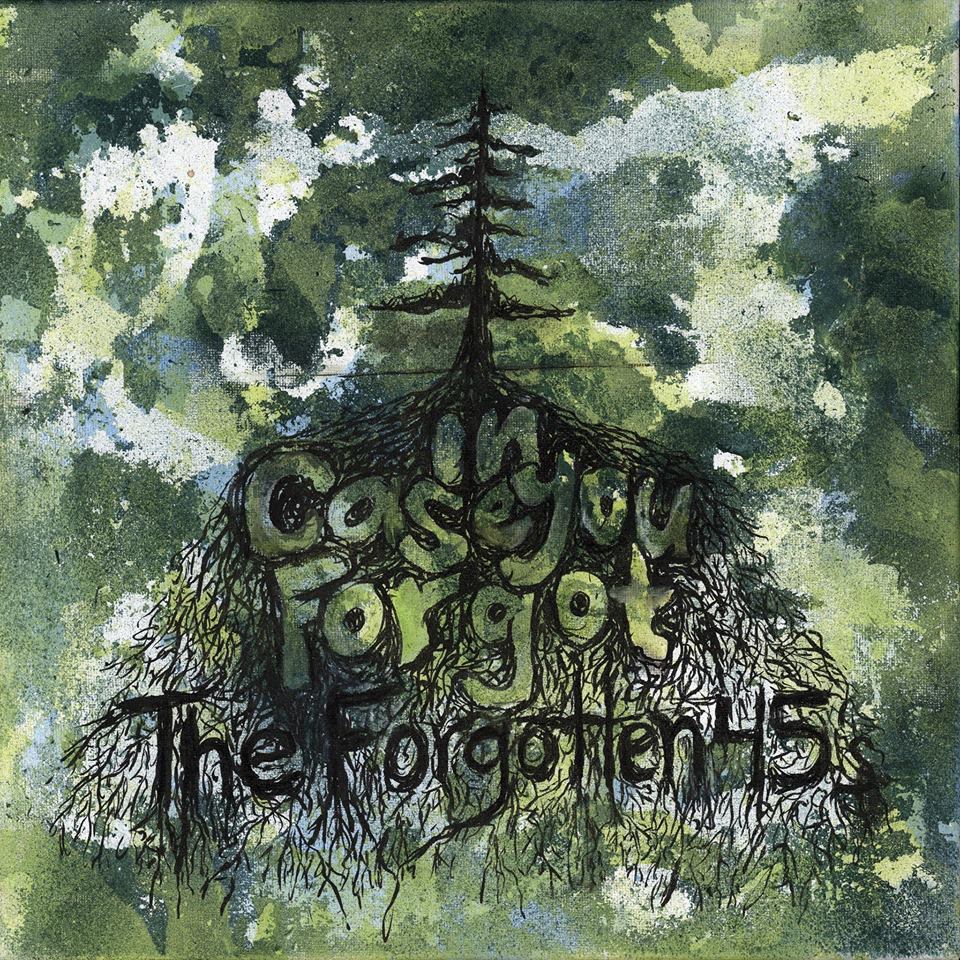 What a pleasant surprise!  And by that, I don’t just mean that the music is good…but that also with 2 out of the 4 songs in review today from their album-sampler matching titles within the Red Hot Chili Peppers catalog…it was actually a blissful relief to hear original songs from The Forgotten 45’s rather than just cover tunes.  If it was 1992 I might have wanted it to be the Chili Peppers but that’s a long, long time ago and far too many songs about California away at this point…

Besides…as much as might have ever liked the Chili’s at my maximum, what The Forgotten 45’s are doing in music is much more suited to my own personal taste.  I’m a melody-guy, always have been and always been willing to admit it here on the page; my beard might scream rock/metal but I’m truly all about the tender & sincere bond between real emotions and music.  I’ve checked out most of the new record from The Forgotten 45’s called In Case You Forgot…and quite truthfully, a lot of this sounds a lot like what I seek out in music to listen to in my…you know…time spent listening to music outside of all the other time I spend listening to music.  The main-point of this entire story, of course, is to say that I’m digging the indie-pop/rock vibe I hear in The Forgotten 45’s and thankful that they don’t resemble the RHCP at all in the slightest.  Alright…let’s move on…

Wait…wait…wait one Red Hot Minute…just to finish this story off good’n’proper with all the full-details…after writing what I thought would be the conclusion to the RHCP story, I thought I better actually check into their social media…because for some reason, I just felt like I’d see that band name pop-up in the details somewhere.  Sure enough, there it was…right in the influences section of Facebook, loud’n’proud for all to see…the Red Hot Chili Peppers are in there.  To be fair once again…you’ll also find names as far spread apart as The Beach Boys and Alice In Chains or Toad The Wet Sprocket and N’Sync…so…expect that the style/sound of what you’ll hear in the music of The Forgotten 45’s actually takes on significant influence from all kinds of genres & styles throughout the past 5+ decades of our history at the very least.  I got a ton of love for that, as you know…after scrutinizing this list of names influencing their sound endlessly I came out to the conclusion that it said a lot about the well-rounded nature of the band – but definitely also hinted at bands/artists that also have a strong sense of identity & melody in their sound/music.  I maintain that you can learn a lot about a band from checking into details like this…and with a tremendous amount of names on the list I’ve grown up loving myself too (yes Toad The Wet Sprocket, still) – I was pretty sure that I’d be in for something that I’d like when it came to checking out these new tunes from The Forgotten 45’s.

Even though I feel like all the details are fairly on the table now…I still don’t want to take away from the ultimate point I was trying to make, which is really that the RHCP have lost their way over the past decade at the very least and I like The Forgotten 45 much better already – but I’m sure you were getting that.

Checking around through the album…jeez…I mean…it’s hard to say if I got the right four songs if I’m being truthful.  Mood-dependent, a lot of the songs outside of the four in review here could easily be massively appealing to my ears at any given time…but I think whomever was in-charge of pushing out the promos did a solid job of sending over a pretty good representation & snapshot of what The Forgotten 45 are all about.  I started with “Otherside” and was immediately impressed with the way the guitars got that seriously beautiful & crunchy tone in a riff that Dinosaur Jr. would have been proud to call their own.  You could potentially argue a bit of Built To Spill in that sound too…but…the resulting polish from Nolan McSheridan’s vocals in The Forgotten 45’s would be considered to be much more palatable to the masses out there I’m sure.  “Otherside” for me wasn’t so much built on ‘hooks’ as it was a heavy-dose of nostalgia for me personally when I listened to it; I could certainly hear the influence of the grunge/pop sound and how the combination of the way this band approaches their vocals and melodies draw the sweetness out even more.  For me – I think it works…the magic of “Otherside” for me is right in the pre-chorus…verse is decent, chorus is simplified but solid…but it’s that added flow & smoothness that they find in the melody as the verse winds into the pre-chorus that made this first track hit the mark for me.  Well – that and the guitar-solo!  I genuinely felt like guitarist Michael Rossi would be the kind of guy I’d grab a beer with and end up talking music until the bar closed after hearing the way he played this first cut…I can hear the influence – but more importantly, I can hear the care, respect and skill that he’s playing with.  The tones are absolute perfection as far as my ears are concerned.

“Make You Mine” takes the band much further back in the timeline of their influences towards the 50’s/60’s where melody really started to bleed into rock’n’roll.  Really dig the guitars once again…overall, I’m not hearing any real issues in the band whatsoever; tight & reliable rhythm section between Cosmo “The White Samurai” Mailhot (Bass) and David Gies (Drums) keep the songs flowing perfectly in-time.  You can hear even in the simplified-melody of a song like “Make You Mine” which heads back to the roots of pop/rock that the band is a skillful one, but also a band that’s comfortable with their ideas, vision and sound to make the experience a real one & not stuffed with imitation cheese.  You could argue that “Make You Mine” isn’t recreating the wheel and that’s fine, we’ll all listen to you…just be ready for the comeback, which is that we don’t care and a good song is a good song.  “Make You Mine” is a good song!  I dig the way Nolan sings this song…I’m guessing that he’s responsible for the backup vocals as well, which are phenomenal.  I’d certainly recommend they really takes a listen to how well those backup parts came out and how bold & confident they sound…because even though I thought the hooks in the verse & chorus came out stronger in this second tune, it was still a lot of the supporting ideas in their writing that I found were leading them to victory.  Somewhere legitimately in the middle of the Gin Blossoms and the Lemonheads, “Make You Mine” exists sweetly…maybe toss a little R.E.M. in there for good measure with the mandolin-sounds and The LA’s for the treble-tones of the guitar.  Most importantly, The Forgotten 45’s aren’t too much of any one element or influence – and it’s through that they’re able to secure their own memorable identity in what we hear from them regardless of whether or not the approach, sound or style is familiar or not.  “Make You Mine” is the kind of song that’ll help you identify the asshole in the room at any given time; it’s a completely inoffensive and sweet song – to the point where if anyone in earshot wanted it turned down, it’s probably much more indicative of a psychological problem that they’ve got on their own rather than one you’d find in the music…just sayin.’

“Ms. Kuhle” is a damn good time…I got no problems with this either.  I felt like this particular cut moved the needle back towards the mid-late 90’s again with more of a Fountains Of Wayne approach to the melody, movement and groove of “Ms. Kuhle” – but definitely also in the playful nature of the vocals and lyricism of this track.  It’s like…it’s like…it’s like if you can SOMEHOW imagine that Sloan was a good band, I think they’d sound a lot like what you’ll hear on “Ms. Kuhle.”  I’d be pretty damn happy with this one if I was the guys from The Forgotten 45’s – the execution on this cut is completely solid, they all sound great and get some real highlights in the vocals & guitars once again.  Great mix on the vocals throughout the verse, which I thought was definitely the strongest I’ve heard from them so far, probably the chorus as well if we’re talking about the hooks that make music accessible to all.  Overall the song has a seriously uplifting attitude and vibe you can’t help but notice – this whole cut rolls exactly the way they’ve intended and you can absolutely hear a band in full-control of their sound & confident here.

If we’re talking about strengths and songs that’ll last though…I’ve gotta hand the award to the final track “By The Way” (Still not an RHCP cover, promise) – because this track has got the extra ‘it’ factor in the writing for those that really dig music.  I’m talking beyond the surface-level hooks…the people out there that really dig smart writing, clever changes in tempo & structure…each part of “By The Way” was impressive as it played and really transitioned flawlessly as it moved into the intricate and extreme-sides of The Forgotten 45’s sound & style.  While the hooks of “By The Way” might not be the ones you traditionally always find on the radio – YOU tell me what’s not to love?  Nolan knocks this one absolutely out of the part with a genius melody-line in his vocal-flow guiding the verse, the guitars are once again exceptional…the drums and bass as reliable and vibrant as ever.  The Forgotten 45’s range through atmospheres & evolutions in their song that roam through territory occupied by the Gin Blossoms, The Shins, Weezer…and you could even argue a bit of Alt-J in the exceptional way they’ve added complexity into the lyrical-structure of the chorus on “By The Way.”  A really fantastic tune to have ended a first impression with…I’d still probably put “Ms. Kuhle” out there first if we’re talking about accessibility for mass consumption – but if we’re just talking really, really damn good songs and what appeals to me personally – “By The Way” is definitely the kind of unique song I’ll remember them for.

Overall…definitely no complaints from me about The Forgotten 45’s.  We obviously grew-up on a ton of the same bands and still love those same sounds to this very day – I’m confident that these guys represent and respect those influences to the very best of their abilities.  Each of these four tunes gave me a solid reason to want to check out their second record In Case You Forgot – this band’s got a lot of talent and even more ideas on how to combine & blend sounds, styles and genres together successfully.

And yup, you got it, STILL way more enjoyable than the Chili’s have been in quite some time…that was the point I was trying to make wasn’t it?

Find out more about The Forgotten 45’s at their official Facebook page:  https://www.facebook.com/pg/forgotten45s

Tags: In Case You Forgot Singles sleepingbagstudios The Forgotten 45's