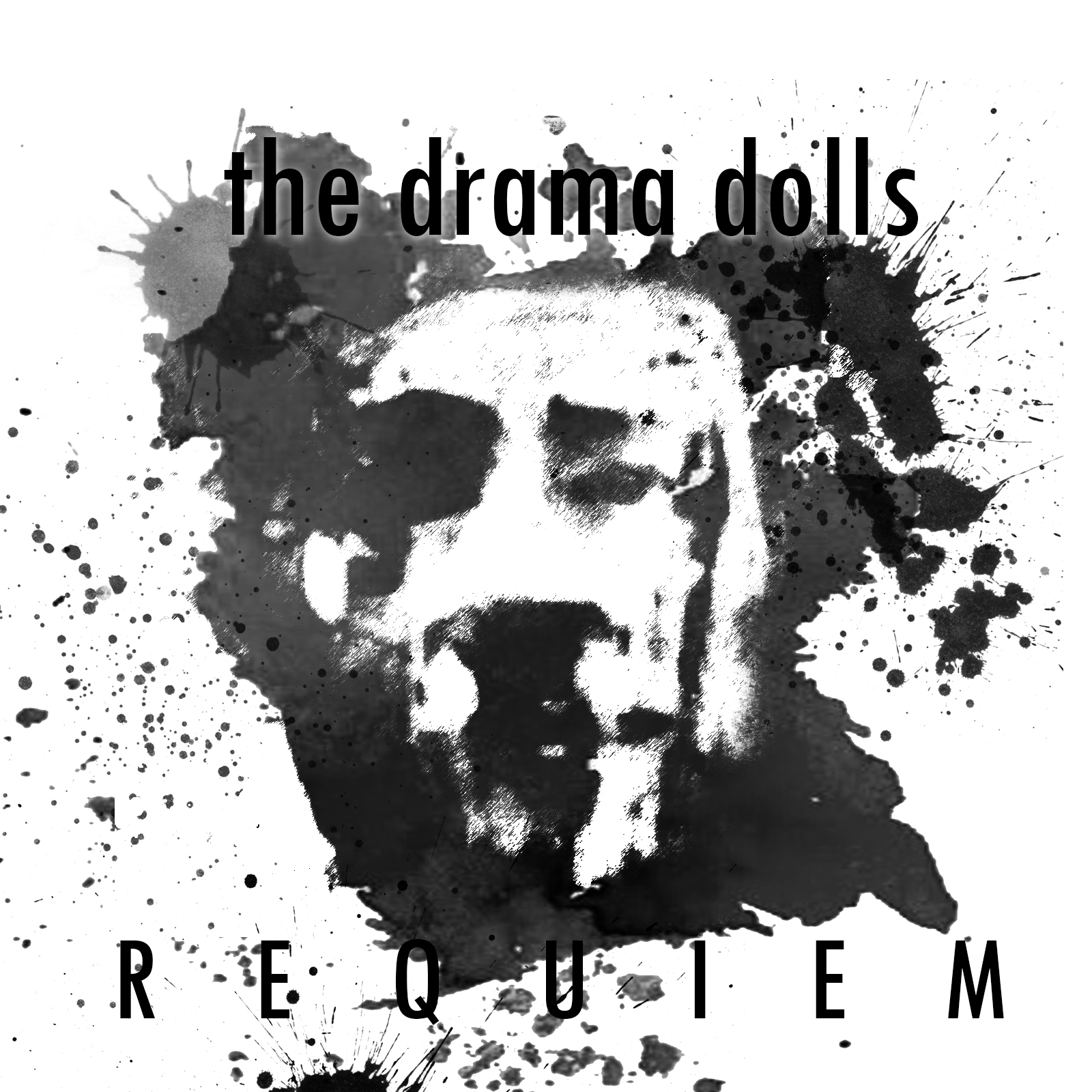 Big credit to Mike Cambridge at the helm of the controls for The Drama Dolls…let me tell ya why.  I see a ton of bands in the independent scene going for EP’s over albums these days in effort to keep the music-flowing at a better rate; and while that’s all well & good to have – those songs are often left relegated to those short records.  Back in the day of the ALBUM…these EPs served as a way to test the waters, to find out what needed a tweak here and there in order to find the perfect result.  I’ve talked with Mike before many times behind the scenes and in an interview here on the pages previously…and I know how seriously he takes his music.  He’s righteously excitable, but still right in the head…he knows when to pull back and slow it all down when needed to get the best results possible.  I’m proud to say I really believe he’s done that here on Requiem; a mix of what you know from his EP The Sublime Art Of Self Importance and previously released single “Control” in addition to five new tracks to go with it.  He’s taken those ideas, opinions of what people heard in the music and allowed that to really guide him towards an album that really contains the full-view, full-scope and full-sound that’s he’s always pursued, fully-realized.

Mike’s put a steady-hand on the studio-boards to get a perfect mix on this record with the mastering engineering from Pete Maher adding the perfect touches on the album…and as a result, The Drama Dolls sound more perfected than it has yet to so far.  Pete’s own credits include bands/artists like U2, Garbage and Katy Perry…so…nuff said right?  Clearly the man knows his music.  Together, through the ideas and music made by Mike, Pete’s assistance on the boards and familiar collaborator Chris Hodges turning in some more stellar performances, the older-stuff has been revitalized vibrantly and the new-stuff highlights their best on the continued journey of a band that’s clearly on the right path forward.  Besides that…nothing’s old if you do something new to it, which will stand out to you throughout this record and especially those that know the songs of The Drama Dolls past.

But really…the shorter version of everything I wanted to say there, is that he was smart to bring these tracks from the singles & EP’s back here with strong new material to tie it all together.  Requiem sounds like the vision he’s always been working towards really hitting its stride in-full; the older-tunes are updated and still sound consistent with the overall sound & style of The Drama Dolls and the new-stuff, like the opening track “Blink” already shows this band has been absorbing the feedback and ready to put out the golden results of the sum-total of their experience into this record.  It moves and grooves, shifts perfectly into a soaring verse and ripping-chorus…for those that have followed The Drama Dolls and familiar with their sound, you’ll hear Mike’s music immediately come out powerfully expressive and Chris Hodges continually rising to the challenge.  It audibly sounds like the evolution of a pairing of talents that have really found themselves in their respective roles…it’s better than just comfort, it’s accompanied by pure enthusiasm in the performance – “Blink” sounds freakin’ fantastic!

The update on “I Want More” really smoothed this cut right out.  In a good way, in my opinion.  I’m not sure if Chris went back to the drawing board and re-sang this one or not…or if I’m just more in-tune with the sound of his voice now…but I’d assume that’s part of the update, along with the strings making themselves more present now than they did if I remember correctly.  New version sounds superior though…there’s no doubt about that; from where it came from The Sublime Art Of Self Importance on the EP to where it is now makes all the difference it needed to in clearing up any rough-edges – I’d assume this was just how Mike was looking for it to sound.  I feel like there’s been more strings added to “Control #1 (Electric)” too…but maybe I’m crazy…either way, that’s really standing out to me in both these tunes with some really impressive sounds, along with that more consistent punch to their production.  You’ll also get an additional crack at this former-single in an acoustic-rendition towards the album’s end, spaced out perfectly so that by the time you start to hear it coming at you again, it’s like a hi-five from an old-friend coming to say ‘what-up.’

“Control #1 (Electric)” finds a solid-ending that drifts and glides into the opening of “Absolution” which is another new-tune on the record.  Mike’s enlisted some noteworthy support on this one…the backing vocals really deserve a ton of credit both on her own and in tandem with Chris – they sparkle with a melodic & brilliant shine.  It’s that contrasting mix of emotions I’ve come to admire in the music of The Drama Dolls…to hear it sound this clean and punchy…it’s just freakin’ awesome and I’m really feeling that victory-feeling I’m assuming that Mike’s feeling about the way Requiem has come out.  Great bass-line set against the beat & strings of “Absolution” and the introspective lyricism really sounds perfectly delivered, approached with all the right instincts from both vocalists.  Great rhythm, solid groove, expressive chorus, excellent guitar solos…powerful tune overall.

Updating the mix on the final two from the previous EP, “King For A Day” is largely left untouched, just a bit of added consistency on the mix to match the rest of the record perfectly.  Still love this tune, and I stand by everything I’d have previously said about it in our past review of The Sublime Art Of Self Importance EP I’m sure, because it was killer then and it’s still killer now.  It drops out into the expansive opening atmosphere of “Don’t Waste Your Prayers” which carries its pop/punk sound loud’n’proud as it’s adapted into its new mix & master.  Sounds like a bit of low-end work & shifting dynamics between the highs have been used to The Drama Dolls advantage on this track for sure…can’t remember it doing that this pronounced and with this much punch & presence before.  I might have missed that…but in any event…what I’m saying is that it sounds nailed here on the album version to me.

“Requiem,” the record’s title-tune, is huge.  It’s got a large amount of crossover appeal from all the genres of rock, the harmonies sound spectacular through the dramatic switches in the music into the chorus.  If anything…the verse might be a little too towards the Billy Idol side of rock for me personally, but the chorus is intensely different from where the verse sounds and The Drama Dolls switch on a dime to make it all happen.  It’s instantaneous…and vibrantly electric no matter which part you’re listening to.  Hodges brings a lot of frantic-soul sounds to the main verse…excellent backing vocals and a truly strong performance from all concerned.  It might be a little bit tough to dance to…but I’m not certain that was the intention…just kidding.  Well…I mean the point is valid…but yeah…that was meant as a joke.  What’s no joke is the assembly and flow of this album’s title-track, right up to its glorious ending, it’s smoking hot entertainment in audio with a ton of twists in the writing here that really shift the song from side to side throughout each part as it plays.

Gotta say…absolutely loved “I Should Have Known” – this is a glorious rip through insightful punked-up alternative rock.  Seriously captivating…this mother moves at lightning speed, the hooks are plenty strong and the performance for Hodges takes it all to that next level.  Definitely one of the highlights on this record for me – no one’s holding anything back on this one…and it plays like that with huge confidence and a roaring rock sound.  Excellent instrumentation and writing burns brightly in this fired-up cut…has the energy of like, Buckcherry…but you know, listenable.  Raising self-awareness in a song examining himself and the signs that point out where to turn to next…”I Should Have Known” is a huge highlight…it’s all-out frenzy and epic rock in all its glory.  Extra points for saxophone use.

“Control #2 (Acoustic)” finds a truly beautiful remix in its acoustic treatment, perhaps in many ways sounding a lot stronger than its original electric version.  Everything is a lot more clear…the emotion and power in the lyrics really comes through hard on this acoustic performance…both in the music and vocals.  Strings once again come in to assist, there are clever slight & subtle percussive elements and the song’s core translates extraordinarily well into its new acoustic-skin.  Hodges absolutely nails this one all the way through…the focus here on this song from everyone involved is a real credit to the way they work together.  Adapting this song isn’t just covering it easily; it’s a completely unique take on the fiber of its arrangement with added layers of depth really taking the entire idea to the next level.

The more I listened to “The Hardest Part” at the end of the record, the more I really ended up liking the hooks that make this song spectacular, and what sounds like it might play safe and simple at the end ramps itself up continually as it plays to a proper, justifiable ending with real impact.  Great guitars from Mike solo along beautiful with excellent tone, strings again in the mix really strengthen the atmosphere of these songs on Requiem overall and it works again brilliantly with “The Hardest Part.”  Spectacular ending to this song that really puts emphasis on the music-side as it has for much of this track.  Hodges, again spot-on in another highlight performance shows real range, ideas and heart in his approach.  Definitely impressed with everything I’ve heard from The Drama Dolls on this record…it’s great to see/hear real ideas reach their full fruition – and I think Mike can finally rest these tunes knowing that they’ve come out as golden as we’ll ever hear them on this album stuffed wall-to-wall with entertainment and flat-out inspired performances.