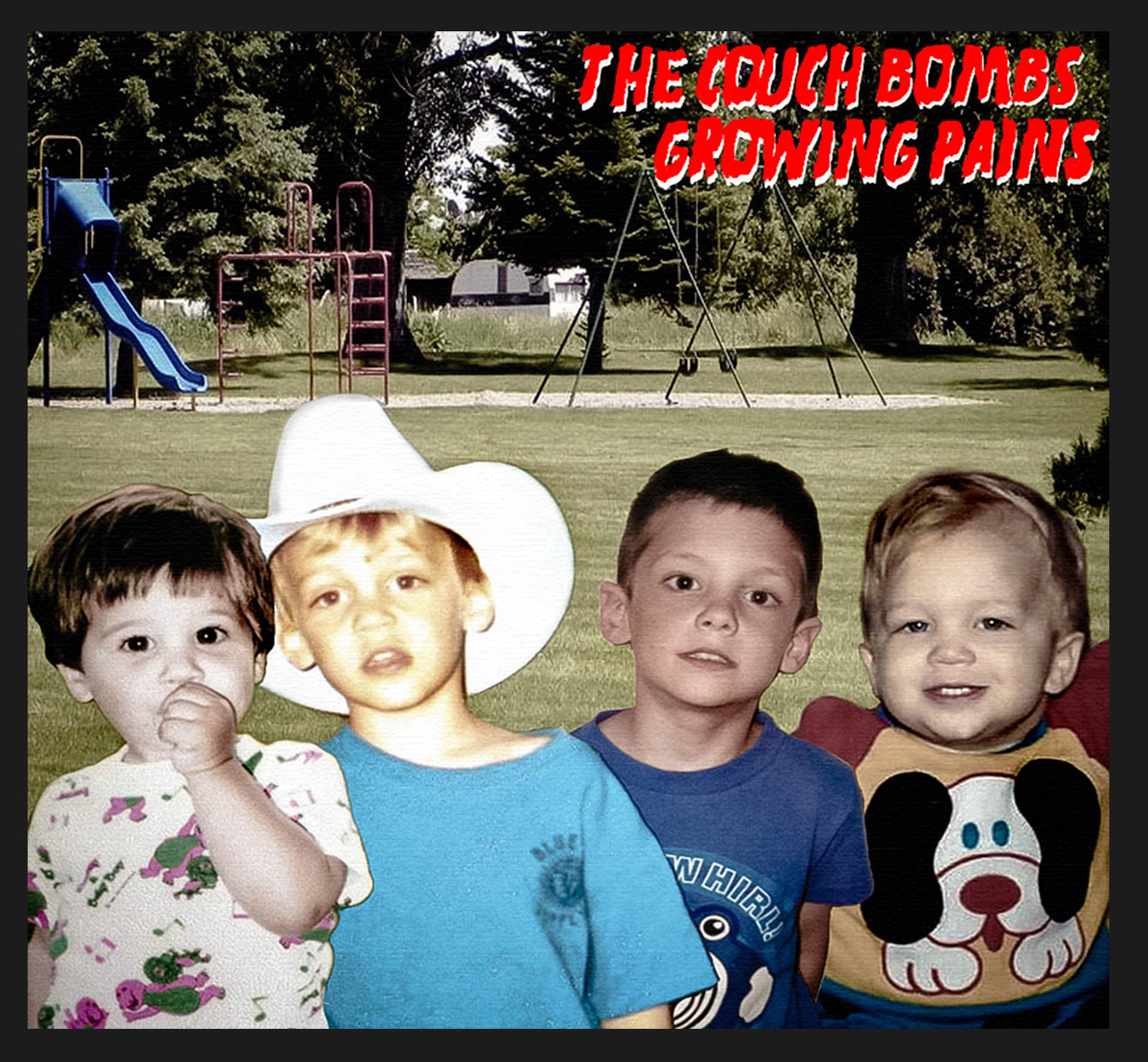 Punk from Colorado these days eh? Everything I’ve been reading has definitely been hinting at that whole area really trying to get their mellow-on…or is that just what we’ve been led to believe?

The Couch Bombs are a four piece of power-punk mayhem…and I have a pretty damn good idea of how they found their way to us here…seems to me they are pretty connected to a similar band/sound that we’ve reviewed in the past…one of which it looks like they shared a bill with not too long ago…beginning of the year in fact…The Vanilla Milkshakes! So…well…if any of that isn’t just merely coincidence…rad for TVM to point The Couch Bombs our way; you see…people have such a misinterpretation of the punk-scene…there’s community! There’s love! Awwww…

I better get back to the music before I make these punkers sick to the face. With rad guitar squelches and amped-up energy, The Couch Bombs blaze-up “I’m On Fire” at the beginning of Growing Pains. Much of it reminds me of like…some sort of blend of Bad Religion meets Social Distortion…the harmonies and strategic planning in the vocal-department of this opening track and the following-cut, “The Art Of Giving Up.” There’s your splashing-punk-thrashing happening for sure…but both of these tunes packed into the beginning of the record definitely hint at an insistence of melody and strong hooks into their music. You’ll hear that crunch and rasp that made Bad Religion a damn kick-ass band and leader in the punk-scene for years on “Detained,” which has a few moments where the strength of the hooks find that way to blend pop/punk like BR did on tracks that came off of their Stranger Than Fiction album. Whether they’re too punk to admit to their pop-sensabilities…well…I don’t know; but I don’t see either a reason for shame or sense in denying what is clearly a major part of their music. Much like The Vanilla Milkshakes in that sense…The Couch Bombs have made their songs with strong hooks to pull you right in to their reckless-brand of power-punk.

Diggin “’Merica” big time. Putting the political-side of punk in the spotlight for a moment…The Couch Bombs are doing a wicked job of keeping it true to the roots of punk while still offering something rad to listen to that doesn’t just sound like every other punk band or even themselves necessarily track-to-track. They switch it up lots…drums/percussion & bass take a large jump into the record right around “’Merica” and definitely on the verifiable ready-to-go new-punk anthem of “Drank.” Many of you out there…like myself…spent at the very least a tiny portion of your youth listening to the words of confident punk defiance and raising more than a beer or two, probably maybe even smashing a bottle every once in a while. “Drank” takes me right back to that time…seriously…this song kicks a shitload of ass…it’s as accessible as punk/pop could possibly get.

The Couch Bombs go huge once again as they storm into “I’ll Be Waiting” – definitely another one of the strongest tunes on the record for sure. Great ideas in this song…like a younger, hungrier version of Green Day before they got so damn comfortable…or maybe similar to what you’d find in the Superchunk or Seaweed albums & songs…all very high-energy stuff and “I’ll Be Waiting” has a nuclear-reactor’s worth of the right-energy in this rad cut. Probably my favourite for the drums for sure…vocals and ideas for those vocals as well…there’s a lot of great stuff happening on “I’ll Be Waiting” – this is the punk I dig the most…this kind of powerful beat has that real extra added-punch to it.

From there we somehow jump into what sounds like The Planet Smashers territory for a moment…but within this three-minute tune you plow into a grinding punk-explosion – especially considering you start in what would certainly be considered to that good ol’ ska sound. The Couch Bombs transition flawlessly as they rip from part-to-part…ripping aggression in its punk fury, melody and a real focus to the ska-half. I’ve never been a big fan of ska-anything really…but truthfully I don’t mind “Growing Pains” due to the impressive amount of transitions, switches, twists and turns completely being nailed from wall-to-wall.

Heading into extremely ambitious ideas on “Scapegoat” – I wasn’t quite sure how I felt about this one in terms of whether or not it worked overall. I like that it’s different…I like/love the drums again…guitars and bass are solid…but you see – here’s where it gets tricky; I like the vocals too – I’m just not completely sure I liked the song itself I suppose. If that makes any damn sense…I suppose another way of saying it would be to say they play it well and it might just not be my thing…but I don’t even know if that’s true. What am I trying to say here? Maybe it’s that different from the rest of the Growing Pains album that I didn’t feel like it quite fit the mould of this particular album’s direction. YEAH! That’s it! That’s what I meant! Now we can all celebrate that fact and move on to the next track…finally.

If you can’t find yourself relating to and connecting to the lyrics in “Shit” – then in my opinion, you’ve missed out on an extremely rad part of life. Or at least not nearly enough time in the trenches of life.  As chaotic as The Couch Bombs will remind you of what it is to be of legal age and responsible to bills, cleaning and adulthood of any kind when you’re trying to get your party-on still. Again…if you’ve been down that road…if you’ve been there…if you know what I’m talking about then you know firsthand – that AIN’T EASY to do! Hell…I’m pretty convinced I’m still trying to figure that “Shit” out daily. Rad song that blazes by with a ripping-fury from the drum-set once again as the lyrics lay out the realism of LIFE for you. That’s right – I said it.

The final track, “Starts To Catch Up” puts the accessible rhythm & groove of The Couch Bombs back into the mix. Maybe a slight ska-edge to it…not enough to concern me…we’re still good here on this one. I really dig the guitars and the vocal-hooks once again…I can’t really deny that I dig what’s going on in this sound/scene that seems to be happening down south. I wouldn’t tell you it’d be my normal, everyday thing…but I can definitely say that I’ve been in this mood many, many times throughout life and usually at least a couple times throughout the year…hit that punk-switch and dive right in. The Couch Bombs do what they do really damn well actually…I can hear the high-energy, the ability, the writing and the real heart of punk beating strong inside their music. They might and you might experience Growing Pains from time to time in life…but they’ll come out of the personal wreckage into something even badder-&-radder…I wouldn’t worry about The Couch Bombs…for some reason…probably due to how well these dudes seem to play together & sound united – I get the sense they’re gonna stick together for a long, long time.

Find out more from their official page at: http://www.thecouchbombs.com/