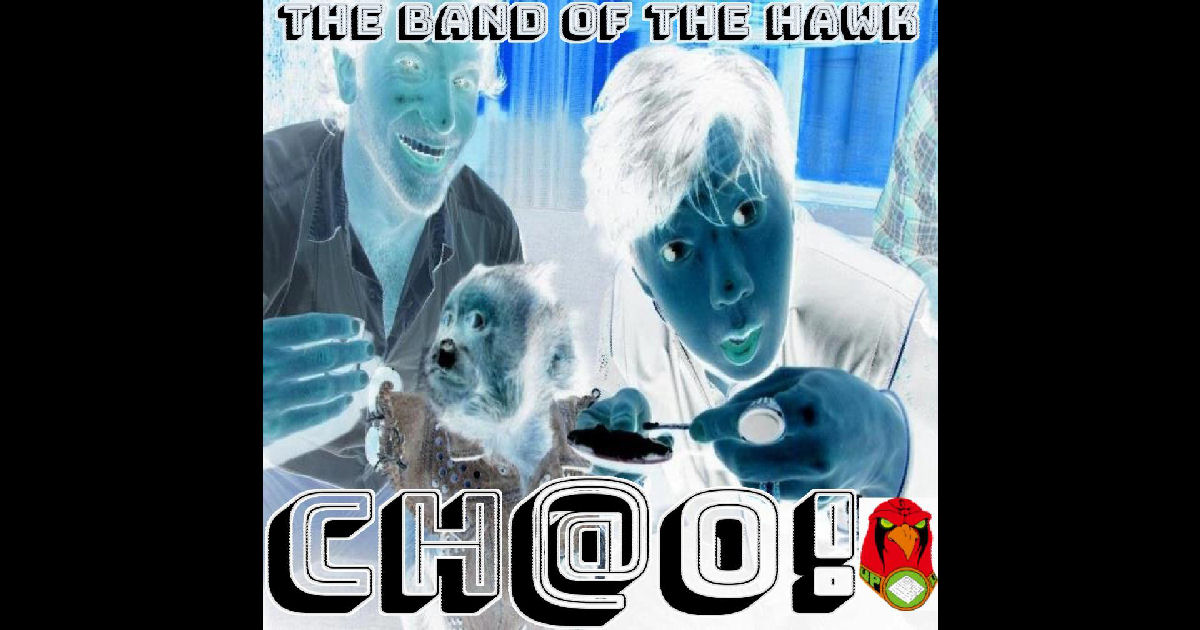 Here’s a tagline on the music worth noting…

Facts.  “CH@O!” is definitely a statement cut from this crew, with all members representing and taking their own confident turn on the mic & in the spotlight.  Everything about this new single sounds large & in-charge as they surge over bars and leave lyrical scars on all the other emcees out there listening to how these boys DO WORK when it comes to The Band Of The Hawk.

I’ll say this…for what people typically know and associate Hip-Hop to be, the sound of “CH@O!” takes a more twisted & menacing approach; it’s in the art of the rhymes here that you can hear the genuine distinction in what would make this track belong to one genre or the other.  “CH@O!” doesn’t stretch itself thin looking for that overtly positive vibe that so many in the moden-era have come to associate the genre with…The Band Of The Hawk is simply keepin’ it real and tellin’ ya like it is.  The music and the extraordinary edit on the hypnotic atmosphere that surrounds these emcees is straight-up wild to listen to, really allowing for this whole crew to bring as much personality to the mic as they feel it can handle.  The complexity of the lyricism and how they all string their words together in the flow or bend syllables to make the pivoting & shifting of each line hit the mark for its metering & pace…that’s where you get that hit of real Hip-Hop.  Not saying straight-up Rap can’t contain some of that magic…I’m just saying that the quality of the rhyme isn’t always the number-one focus on that side of the genre.  Real dedicated Hip-Hop like what you find in The Band Of The Hawk has got that emphasis and energy in each bar that audibly confirms that these homies have seriously put in the work to make it perfect.  As they trade the mic between them, you can hear how authentically rock-solid the core of this crew truly is as they transition flawlessly and spit their rhymes with all the precision & passion you wanna hear.

Depending on how you look at it, depending on how you define success, there are different results to be had.  On the one hand, “CH@O!” is an undeniably killer cut that’s full of rhymes worth checking out and the music brings the intensity of the entire track to the next-level…like the whole song seems to be looming right over top of you and is at the ready to take your lunch money.  Captivating for sure, riveting in others, and not a single emcee drops the ball when it comes to the quality or focus on “CH@O!” – all that good stuff adds up to a high quality listening experience and genuine entertainment.  That being said, there’s not a doubt in my mind either that The Band Of The Hawk has made a Hip-Hop track that is designed almost more with their peers in mind than perhaps with the mainstream, feel me?  Emcees are going to listen to these guys and respect what they spittin’ – but in terms of making the kind of cut with multiple access points to bring the people in…even with the advantage of seven rappers on the mic, they’ve still locked into a particular style & sound that either some people are gonna get, or they’re not…what The Band Of The Hawk likely won’t receive, is a lot of middle ground.  I don’t think people are going to ever hear “CH@O!” and just come out thinking, ‘well that was nice’ or ‘that was OK’ – that’s not how a track like this works.  You either get right into the art of the rhyme here with The Band Of The Hawk and dig in to what MAKES Hip-Hop real, or you likely keep moving on in search of something that’s way easier to sing along to.  I’m pretty sure The Band Of The Hawk is already plenty aware of all this…I honestly don’t think a track like “CH@O!” gets made without already addressing the obvious elephant in the room, which is that it’s bound to impress those that ‘get it’ but it is definitely going to struggle with finding its way into the ears of those that don’t.  But like I was saying from the get-go here…it’s all about how you define that success and what you really WANT to get out of a track you lay down – and in the case of The Band Of The Hawk it’s audibly clear that they’ve made that choice to go with the unique qualities that define them and represent the crew exactly as they are on “CH@O!” – and I think ultimately, you’ve gotta respect that choice.  So what if you won’t find it on the radio – you WILL find it on that playlist from that dude out there that you know that ALWAYS has the best of the best flowing out from his speakers…that person that’s got their ear to the underground and actually knows what’s up when it comes to music…that’s where songs like “CH@O!” exist and thrive for years and years beyond their release as those who know spread the word to those who don’t, so on & so on.

On a personal-level, I dig this…I think they’ve made a really gripping and intense track, while still sounding like they could do this all damn day when it comes to each verse that “CH@O!” rolls through.  I like inventive cuts like this single that reach for something outside of what’s typical and challenge what we know…or at least what you regularly listen to.  If you’re on the inside of Hip-Hop, you already know that this cut fits right into the mix there with its skillful bars and wildly innovative beat…for the rest, The Band Of The Hawk has given your mind plenty to chew on here with “CH@O!” and they roll so quickly & intensely through the hypnotic vibe that runs deep on this single, you might just get motion sickness.  Like I was saying at the beginning…this single is a statement piece…a defining moment for The Band Of The Hawk that really highlights what they bring to their music and to the microphone…it ain’t tryin’ to be Top-40, it ain’t tryin’ to be about anything other than what’s clearly brought them together in the first place – quality, integrity, and top-shelf skills on a quest to make real Hip-Hop that truly lasts.

Find out more about The Band Of The Hawk from their official page at:  http://bandofthehawk.com

Tags: CH@O! Singles sleepingbagstudios The Band Of The Hawk