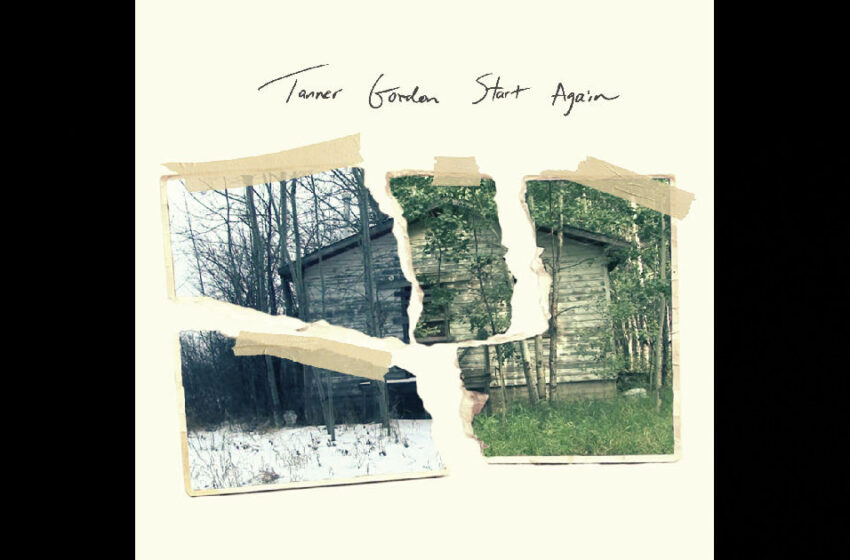 Well now – looky here will ya?

It’s gotta be feelin’ real good to be Tanner Gordon right about now…likely feelin’ better & better by the day in fact.  It’s been twelve years since he last dropped a solo record according to the ol’ information that’s out there online on the internet…mind you, he’s kept plenty busy with his band The Unfortunates during that time – you would have seen them posted up here last year with a series of videos we blasted out, including singles like “Brick By Brick,” “Love Was Right,” “Hurt No More,” and “Caroline.”  Around that same time, we got our first taste of what their band-mate Tanner was working on solo with singles “Over” and “Safe” released in advance of his brand-new record Start Again, which officially comes out next month, at long last.  The world’s opening up again, the horrors of the year that could have been are slowly fading, and brighter days are ahead – Tanner’s been working on this record for quite some time; I can’t imagine he’s feeling anything else but stoked about the fact it’s finally coming out this November.

While it’s true I’ve had myself a peek or two through the lineup of the upcoming record…I’ve gotta keep most of those juicy details to myself for now.  What I can tell ya about, are the new two singles he’s dropped in advance of the album, including its title-track “Start Again,” and another cut called “Empty Promises” – and so that’s exactly what I’m gonna do.  We’re about a month or so away from the official release of his record at this point, and no better time than now to Start revving up the machine…Again.

I gotta say…the warmth in the bass-lines of “Start Again” are freakin’ perfection – I would have been sold on those alone when it comes to this first cut I’ve got here in review…the rest, of which there is lots, is actually kinda icing on the cake from there believe it or not.  The welcoming warmth and invitational sound supplied by the bass can’t be understated – it’s essential to the gentle vibe of the verses, and provides a reliably sweet core for Tanner to work in a strong vocal melody, while also giving this song the extra energy & dynamics you wanna find as he transitions and surges on into the chorus.  All-in-all, “Start Again” is on the more delicate side of single-worthy sound, but it’s still single-worthy sound that you’re hearing & make no mistake about that.  Hooks radiate from this track from beginning to end, and whether it’s from the music or the microphone, Gordon makes this single hit home in all the right ways.  If I thought people out there were going to notice just how incredible the guitars are in the distance of this track on their own, I might not even point it out – but the truth is, a lot of the awesomeness you can’t miss out on is also buried pretty deep in the mix too.  Not in that horrible way where you’d never find what you were looking for to listen to – the more ambitious way that simply allows us the opportunity to listen to a track like “Start Again” and continually get something new out of it for many spins long beyond that first impression.  For those of you listening closely, you’ll know exactly what I mean – like…listen to the way it contributes in the chorus around the 2:15 mark – it’s amazing – and it’s just kinda like, IN THERE…wedged between the brightness of the main hooks you’ll hear.  But like…c’mon – as the song ticks past the three-minute mark, you’re pretty much listening to one of the most unique moments you’ll hear from a guitar this year, and Tanner’s got it enveloped snugly within the rest.  Part of me wants to shout “noooooooooo” and get the man to turn it UP – and the other part of me that’s more restrained & professional recognizes he’s played that moment brilliantly.  I highly suspect that half the reason I look forward to it coming around in “Start Again” every…single…time, is because it’s just that much harder to get to in the mix, but always worth the effort to locate it.  I do think there’s probably a bit of room to highlight that kinda stuff a bit more in a song like “Start Again” and push that threshold a bit more – but all-around, you’ll find this title-track to be a highly controlled melody in action and precision-perfect cut.  Maybe there’s a remix to be had one day – or a LIVE version of this song where that spaced-out sound that enters around the 3:10 mark becomes its own twelve-minute epic adventure in music you’re never gonna forget seeing happen on stage…I suppose the point is, there’s a ton to love about a song like “Start Again” already, and yet still a ton of ways it can continue to expand & live on long into the future with just a few twists, or simply being willing to see what else it can do from here.  As it stands now, believe me, y’ain’t gonna be complaining – “Start Again” has Tanner right on-point, sounding stellar with his vocals & melody, giving this song the right hint of nostalgia while also drawing that audible line in the sand that separates the past from the present.  You hit that chorus and you feel that energy burst – every single time it makes an impact – he’s got a solid & memorable cut with “Start Again” and done justice to the title-track of his brand-new record…people will dig this, 100%.

I have wrestled back & forth on how to describe what I hear in “Empty Promises” – this is so much of a tougher song to assess, which I suppose, tells ya something right there in a way.  In my opinion, it’s a deeper cut that’s not gonna quite generate the same quick approval from the listeners out there that a song like “Start Again” will – but there’s real MEAT on this bone too…and I’d hope people would come around to it eventually.  I mean…if we’re talking about songwriting, I’m gonna advocate for a song like “Empty Promises” over “Start Again” every time…I think there’s that much more tangible uniqueness involved, even if the hooks might not be as instantly accessible as they were in the title cut.  Instrumentation-wise, we get a bit more separation in this mix as well that seems to give us a better shot at appreciating all that truly goes into the musicianship of Tanner Gordon’s music – and I’m loving that, very much – you get a couple of short solos on “Empty Promises” and they really stand out brilliantly each time.  I felt like he’s given us more of a storyteller’s style of vibe on this track – ain’t nothing wrong with that whatsoever, it’s just a different gear…for me, a more interesting one to listen to, even if I don’t think the appeal to the masses out there would be quite as strong in comparison to the title tune.  I absolutely love the confidence in the mix…from the vocals to the instruments, there’s such clarity & space involved that everything’s gotta be right on its A-game as there’s like, no place to hide whatsoever between the layers – and that’s exactly what you’ll find – it might be played at a mid-tempo, but it’s played steady, with bold passion and resounding commitment you can absolutely hear.  I also like that vocally, I felt like you get a bigger glimpse of Tanner’s Canadian sound here – you could draw parallels to a ton of great singers right from this nation of ours that bear a resemblance to what he’s laying down here – which for the most part, works extremely in his favor.  That being said…what IS IT that I’m actually hearing here?  Because I’M Canadian…and as a direct result of living here, I’ve never actually heard a Canadian accent – is “Empty Promises” how the rest of you out there hear us around the world?  I think there’s enough proof throughout the rest of the songs I’ve heard from Tanner so far to support the fact he’s making stylistic choices with the way he sings “Empty Promises” more-so than it being the result of some natural Canadian accent that I’m unaware of – and there IS an argument to be made that the liberties he takes (of which there are several) as to HOW words actually sound, creates a hook of its own – which is completely valid too.  Any time we notice something stand out, there’s an inherent advantage to that – but the reality of course, is that sometimes it can work both for and against you; like for example, for myself, every time I got to the hook of Tanner singing the title out loud, “Empty Promises,” it snapped me out of listening to the song as a whole and would put me lazer-focused on the pronunciation of the words.  Whaddya want from me?  Words are all I deal with!  To hear “promises” come out like “promise seas” each time was just one of those things that would probably only get to me, not so much the majority of ya listening – in my brain that’s like…I mean…that’s just not playing within the rules is it?  Are you just allowed to bend these words to your will like Gordon and give them an entirely different sound – or are ya just supposed to find words that have the natural sound he’s looking for?  Obviously I’m kidding around to a degree – I do think it stands out…I’m not 100% sure that’s always to his benefit, but I’m not sure that it’s not either – and at the end of the day, you’re never gonna find me advocating on behalf of any kind of ‘rules’ that there might be.  You do what you do y’all…the only limitations there are, are the ones we put on ourselves – so if you wanna sing “promise seas” instead of “promises” I’m not gonna be the guy to really complain, just observe.  Take it all with this specific grain of salt – it’s basically all Tanner Gordon leaves you to potentially question – the rest of everything you’ll hear undoubtedly slides right through your speakers and into your ears with ease.  The hypnotic finale he creates with his vocal melody was spot-on perfect.  All-in-all, the song plays out like a gripping combination of something like The Beatles-meets-The Tragically Hip-meets-the haunting vibes of early Aerosmith – don’t get it twisted & don’t get me wrong – “Empty Promises” is still a verifiably kickass tune with plenty of depth well worth exploring for sure, and another cut that brings strength to the lineup of his upcoming record Start Again without question.  We’ll definitely be cracking into that album in-full as we get closer to its official release date – Tanner’s great at what he creates & we’ll have plenty more to say about him – until that moment comes later on down the road this year around early November, make sure to keep him on your radar and get him on your playlists out there!

Find out more about Tanner Gordon at his official website at:  https://www.tannergordon.ca/