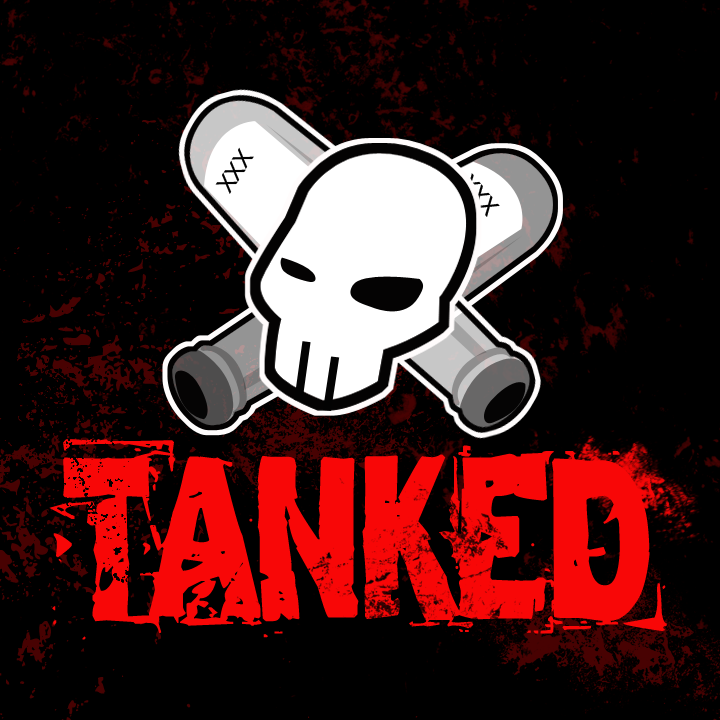 You gotta love it when the first words that come to your mind have anything to do with ‘Dave Grohl’ when listening to someone’s music. Overall, Tanked is nothing like the Foo Fighters 99% of the time, but there are those rare moments, the moments that you catch Grohl in other projects that reveal his true love for the hard stuff. The smile on the dude’s face would be a manic-hammock of pure grin listening to the full-frontal assault from Tanked as they bust into their opening tune “Dust Bowl.” At least I’m assuming…I know the way they attack this tune at full-speed has got me grinning; this sounds like pure confidence and commitment, rad-riffs and gnarly vocals…who doesn’t love that kinda combo?

Speaking of rad-riffs – they light up “Concrete Hand” as the song begins to rip into the opening verse; and here’s an observation bound to make my popularity-points with the band drop through the floor…just keep in mind boys, it’s actually meant as a compliment…here goes…you kinda remind me of Nickelback here. DON’T LYNCH ME – LET ME EXPLAIN!

You see…a long time ago in a land far away for most but basically in all our backyards here in BC…there WAS a good version of that band. They were basically corrupted & ruined by the success of their second album The State, but before that even, there was an album called Curb. And honestly – that’s a damn different (and better) version of the band that exists today, but their music to start had a genuine hard-edge and smart writing that didn’t seem contrived whatsoever. Unforgiving ROCK…and “Concrete Hand” has that same unapologetic, kick-ass-ness to it that Curb had. The guitars definitely lead the way in this track with a wicked riff outside of the verse/chorus grind; the whole track has a ton of energy…I bet these guys KILL it live – it’s the perfect style of rock to create memorable moments in mayhem.

Continuing to build their intensity, Tanked heads into something closer to what The Headstones create in their punked-out rock rhythms with the song “Balls To The Wall.” In a sense, it’s as straight ahead as a punk-rock cut can get…but I dunno…if you ask me there’s something about the confidence that they’ve approached this song with that tends to transcend the more simplistic nature of this tune and propelled it to something completely professional. The band sounds wickedly tight on this third track and maintain a real ‘live’ feeling, mood & sound to the music…someone out there in production-land has done an excellent job of not stripping this band of the raw sound that makes them work so well – make sure to give that person a huge high-five Tanked, any producer knows that’s always a tough challenge to not ‘over-studio-ify’ a live-sound.

I think…hmmm…I think I can’t get enough of “Victim Of The Common” is what I think. I fuckin LOVE this song, no doubt about it. The way the guitars & bass play off each other, the complete and utter ATTITUDE of the distorted-grind on the guitars is just b-e-a-utiful – the alternative sound is alive and thriving well on “Victim Of The Common.” Reminds me a little of the mostly-unknown Canadian band Rusty of the mid-90’s and also actually completely of a harder-edged version of Superchunk. The way they have that ability to combine incredible riffs on both bass & guitar…just like what I’m hearing on “Victim Of The Common” – absolutely loving this song from idea to execution!

“Pirates” is a nifty little ditty ain’t it? I like the push/pull against the spread-out guitar notes versus the brutal-grind of the thrashed-out chorus…definitely a mean & meaty track, full of gnashing-sounds ripping at full-intensity when “Pirates” shows its teeth! In stark, bold contrast, the following song “Loss Of Reason” actually incorporates a little more melody than most of these rock songs have had and really shows their ability to write effective hooks. Perhaps a little out of the element somewhat, there are moments where I felt the vocals could have come out a little stronger on this one, but for 99% of the time I’m not complaining; for the most part, they’re nailed down solidly and have been throughout the entire self-titled album.

I just wanna…I just wanna…I just wanna be able to comment on their track “I Just Wanna” in less time than the actual song is, but I can’t type that fast! Again…something like this thrown into their live-set would just become a massive moment for the crowd in front of the stage, all of whom I’d be willing to bet are just losing their minds throughout the entire less-than-thirty seconds of “I Just Wanna.”

As Tanked ends with “S.O.S.,” I think this band ends the album with its best foot forward. A standout for bass and for its song-writing & structure overall…there’s a brutalizing opening stride before giving way to a grimey element to it like Failure has, just minus a squealing guitar or two. It’s a superior combination of alternative and grind that works incredibly well as it builds, shifts and changes. The bridge needs to come up a little to match it all musically, but the actual chorus itself pounds and I love the way the vocal flow comes out on this final tune. The breakdown into a solid bass, drum & guitar groove & whispered ending…awesomeness and absolutely memorable – gotta say, this isn’t normally my thing – but Tanked has really come out gunning. Full of radness, attitude & intensity…this is definitely worth a spin.

Support them at their official Facebook page here: https://www.facebook.com/tankedband