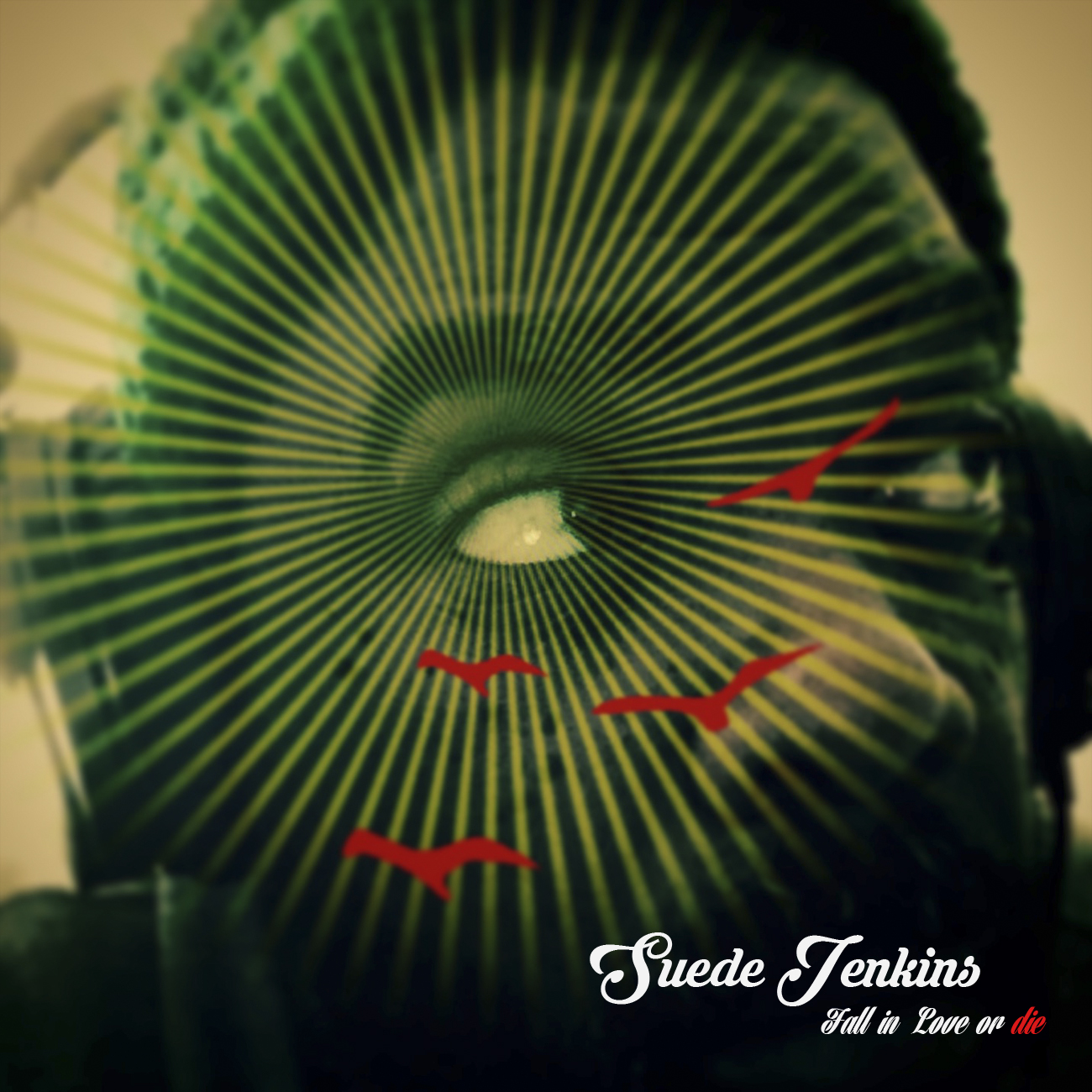 Abbreviated down to F.I.L.O.D. – I’m gonna spell it out for you…because I think the title represents an important aspect of Suede Jenkins…the expanded title would read Fall In Love Or Die. In his defense…I don’t think he was necessarily listing that off as options for how to feel about the new record; but in my defense, I really only know one side of that argument – I fell hard for this album right away…and I’m still alive & kicking. So I made my choice…errr…rather…my ears made it for me. What Suede Jenkins has brought to my speakers this morning is the kind of innovation, style and creativity I go to sleep at night just praying I’ll wake up to.

Of course, when I did wake up to this…and you see from the liner-notes on the album that it’s “Just me, myself, and my microphone” – and with nine songs but none even reaching the three & a half minute-mark…well…for myself personally all I could ever hope for was for once, exactly what I got here with the F.I.L.O.D. album. I mean…there’s tags that might point you slightly towards the direction of the music you’ll experience…but if I was to point out anything from Suede’s social media that makes the most sense to me, it’s right there on the side of his page at Bandcamp: “A Brooklyn Based Super Hero.”

Dude’s got me believin.’ I’ll say it right now plainly for all of you – sometimes less is more…and Suede is going to prove that. What Jenkins has on F.I.L.O.D. is a perfect, professional approach to precision and making sure that each element of the music serves a purpose; there’s often not a whole lot going-on apart from his vocal-flow…and it’ll probably blow your mind just how okay that really is not only with me here reviewing it – but also yourself listening. You’ll get a sense for what I mean quite quickly; after a short atmospheric intro that kind of…declares the mission statement of sorts…Suede kicks-in the beat at just before a minute-in and switches the entire beat right-up. You can hear poetry…still has an edge…still hard where it needs to be and in others displays emotion, style, swag and an invitational-sound that really does make you want to hear EVERYTHING that’s happening in the song from the words to the music. Suede’s got it mixed that way…and as “Brain” starts up the album with its gliding-vibe and has had about a minute to settle in…well…you get one of the most genius-samples to ever break-up a second or two’s worth of song with someone (Jim Carrey I’d guess?) yelling out “Cannonball” for that one beat between bars before Suede jumps right back into the pool to deliver the rest of the verse.

“Brain” is a hell of an opener…it is a MASSIVE indication of just how different Suede is from everything else that’s going on out there – and I mean that sincerely. Right now there’s almost nothing you could say that could convince me that I wouldn’t be seriously debating this album for my end-of-the-year list and we’re only in January! But that whole list thing has always been about finding our best new-sound out there…something like what Suede is doing should certainly qualify. This is new…this is different…this isn’t even a single-degree ‘forced’ or ‘fake’ – this is actually Suede’s natural instincts and approach as to what music could BE like and sound like. He is…whether he’d like it or not…a leader out there in music today…people are going to look up to what he’s doing on F.I.L.O.D. and I’m telling ya…whether it’s tomorrow, the day after or the day after that – something like what Suede is doing WILL find its audience at some point. I think there might be a more select-group of artistic minds that might get and enjoy this album more than some other people from the Top-40 crowd might – but that doesn’t stop music like this from eventually finding the home it deserves. I really think there’s something extraordinary here on this new Suede Jenkins album.

Switching up the vibe into a distorted-guitar riff, beat and just a few added electro-elements & pad-samples showing-up, Suede keeps his formula intact by keeping the recipe for success simplified – just add the good ingredients right? Why add all the filler and the things we don’t need that just cloud the clarity and the mix like 95% of the bands & artists out there tend to do? “Coccoaflame” puts out the perfect-vibe – and just LISTEN to the smooth way that Suede rhymes this one out and jumps into the track on its way into the first minute…the lyrics are awesome…his metering and style are perfection to the millisecond. He has literally and audibly made sure that each and every second you listen to is an enjoyable part of the overall ride…the work he’s put into his focus and delivery is inarguably amazing.

“Tess Mckool” gets a little more playful in the beat and atmosphere. The music-sample is awesome…I’m even reasonably sure he’s got family that pop-up in vocal-samples in the background. With everything from personal-reflections to pop-culture references, Suede puts in a solid barrage of words into “Tess Mckool” as the music bends hypnotically in behind him. His flow is complex – but always so crisp and clear…the exact kind of emcee I want to hear on the m-i-c.

Buckle your seatbelts though homies…Suede is about to go for a gigantic 3:18! You know…people used to give me a hard time for writing really, really short songs…the kind whereby once you just got into’em, the song itself was just headin’ out. I’m sure Suede has gone through similar situations…and I can certainly understand people asking for MORE from this guy…cause he really does make you WANT it. Everything about F.I.L.O.D. is engineered, mixed, produced and performed to a highly-repeatable pressing of a record you can’t possibly get enough of. You’ll notice that in a sense, “FeelYet” still has that near-minute of music at the beginning…all of these songs are short for sure…but often Suede himself doesn’t come in to rhyme until a minute has almost gone by. Personally…I think it’s a nod to the supreme beats and innovative music that graces this record…I think he’s recognized that the way he’s got all this put together, how it plays, how it sounds…it all deserves a real moment or two of thought & consideration from us all as listeners. So he puts the music out there…just like in “FeelYet” and lets the vibe work its magic on you before lacing it with more magic of his own from his rhymes that often feel like freestyle poetry. The essence of Hip-Hop and true meanings of rhythm-and-poetry stamp themselves deep on F.I.L.O.D. – but there still won’t be anything you’d typically expect to hear at any given moment. “FeelYet” in some ways…might be one of the most ‘accessible’ tracks in the sense that it’s a little expanded with its defined parts…the low-end rolling bass-line certainly has a large hook to it…but at the end of the day, you’ll still either love the way that Suede takes on the vocals or I suppose maybe you won’t. I don’t know why you wouldn’t…but maybe I suppose. I grew up on poetry…I’m certainly familiar with the comforting/isolating knowledge that it’s not nearly for everyone out there.

I’d only hope that people would get this though. Songs like “Date Night” move quickly…and I can definitely admit that some of these moments go by so fast that YES, you DO want to repeat them again right away…or the entire album…and for anyone out there saying that he needs to make these songs longer…NO…you’re wrong…he’s got it down perfect…and it really is the entire ALBUM that you need to be repeating. Each of these tracks possess nearly the same amount of ingenuity and radness to the beats and words…the flow from Suede is always on-point…the consistency is audibly ALWAYS present. “Date Night” describes the moment where things are starting to get more progressively ‘serious’ as the night carries on…and he puts bold imagery into the lyrics to make the picture become perfectly clear.

And I know…I know I JUST said that everything on this album is of a consistent-consistency that can’t be cracked…BUT…I suppose…if you forced me to choose a track as a standout…it could very well end up being “GodAin’tMakeYouMine” featuring PimpSonnet. First of all…haha…okay yeah…FIRST of all…we’re not moving another word ahead in this review without acknowledging first what a badass & rad-name PimpSonnet is…because yeah…that’s just how I’m throwing-down here – that name is awesome. Now…as to what’s happening there from PimpSonnet I’m not quite sure…whether it’s the backing vocals or the beat itself…I’m thinking the backing-vox ‘cause I’m pretty sure that’s still Suede up-front on the first hooks you hear and the verse to follow…so if it is another guest on the mic, he’s found a great pairing for his sound because I’m convinced that’s still him in both parts. That being said – the opening verses of “GodAin’tMakeYouMine” – specifically once he gets rolling into the melody he’s made like…right around the :33 second-mark (or at 1:19…you know…give or take I’m sure these are only estimations…yeah…that’s it…) this flow takes flight straight into the fantastic. “GodAin’tMakeYouMine” with its smooth-beat, excellent harmonies, ideas and flow – it’s pure audio-enjoyment 100% of the way through. You might have noticed by this point in the review – Suede Jenkins is KILLIN’ it yo! Better than anything else…he’s killin’ it with kindness, love, passion and heart rather than bitches, money & guns.

I think you also get a couple extra-nods towards what he’s all about through the super-short skits/tracks “I Am The People” and “Different” which surround “GodAintMakeYouMine.” They’re ten-seconds or less each…but they still have something to say…so don’t miss out.

Heading into the poetic-nature of the final track, “Birth” – I couldn’t help but kinda take notice that, for a guy that in pictures looks like he’d be more apt to go out & ride with the likes of Ice Cube – there’s no doubt after listening to “Birth” and to the rest of F.I.L.O.D. that Suede is indeed a lover, not a fighter. Relying mainly on a solitary drumbeat to carry the weight…there’s slight keys and electro-synth added in…but not a heck of a lot – Suede basically takes the final track “Birth” all on his own…and with a mix of smooth vocal-tones and smoother-lyricism, he’s created a solid ending to this album.

“When I’m gone, they’ll know I was here…that’s the point of our lives.” I mean…if you can’t recognize that as the massive-statement it really IS…you probably missed much on this record. But if you get to this final-cut of the record and you’ve stuck with Suede every-step of the way like I have…you’ll know that this line doesn’t just apply to “Birth” – it applies to everything he’s doing. And for what it’s worth – I agree with him; what is life without making a mark or an impact or an impression?

He’s made that impression on me today. Suede Jenkins is perfect as perfect gets on his new record…and though he might have proven handily that he’s a lover & not a fighter – he’s certainly delivered a knockout-punch to the non-creative out there with his imagination, passion & unique approach to what music can BE like. He’s not following a path here…Suede Jenkins is clearly creating his own.

Find out more from his page at Facebook: https://www.facebook.com/GETSUEDE