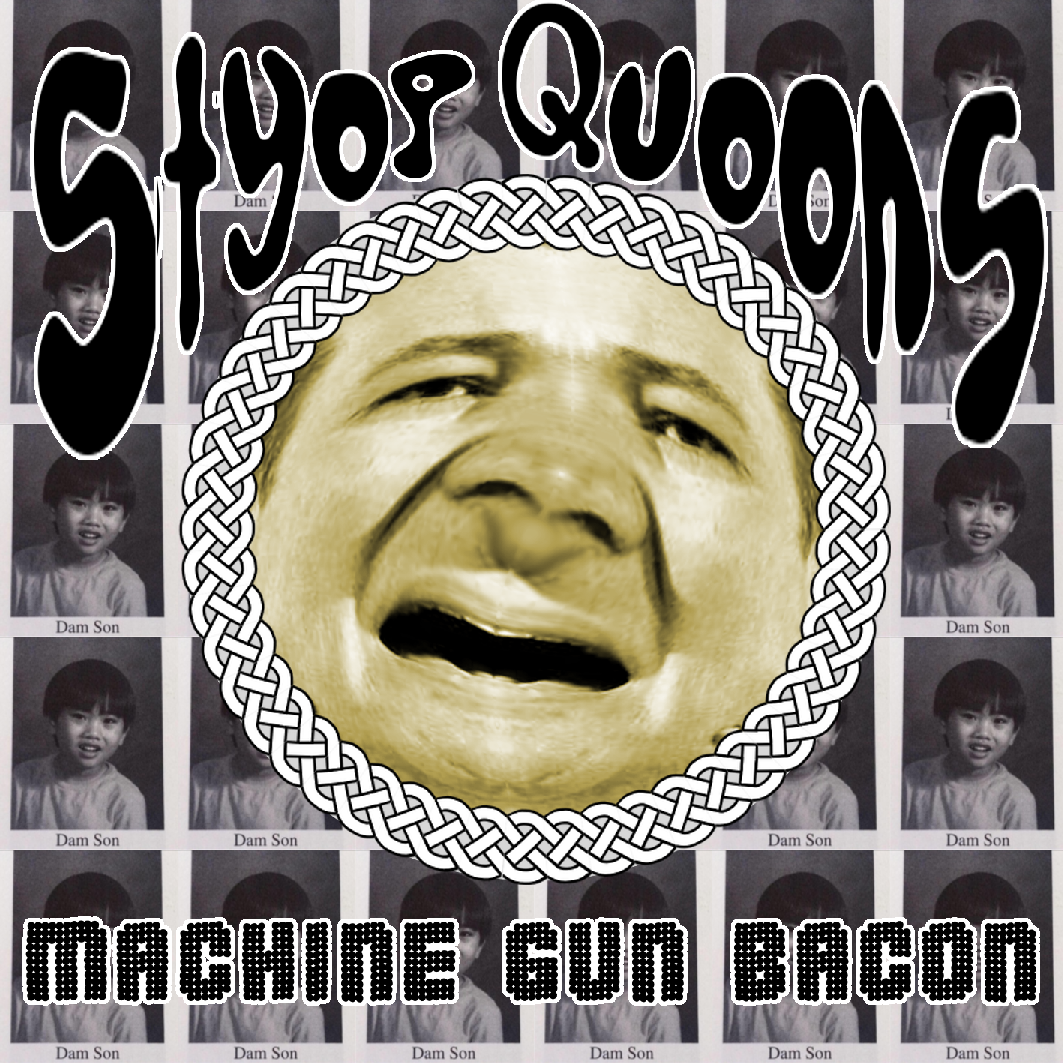 I’ll tell you this much…you don’t get a name/title like this outside of the electro-genre…ya just don’t.  It’s also fair to assume, that out of all the different styles & types of electro out there…that a name/title combination like this is also going to be quite suitable for the late night hours…aka, morning.  I like my music to match, as best as possible, whatever atmosphere & time of day I figure that it might really suit best…to get that full effect.  And so here I am, before the birdies have even gotten out of bed, jamming to the Machine Gun Bacon EP by a band I’ve just stumbled onto called Styop Quoons & having a grapefruit flavored beer at like, 4am in the morning…

All assumptions seem to be correct…and all systems are go!  Styop Quoons come flying out of the gate quickly with their title-track, “Machine Gun Bacon” full of that electro-flavor you can’t help but love.  Shifty and full of big, meaty & beaty hooks like you’d find in the music of Dada Life or Linus Loves, this first cut jumps out of the speakers with enormous sound that is stuffed full of entertainment.

It’s hardly a political song exactly…but if you’ve been following US politics lately, you might recognize where the main vocal sample comes from.  Let me just say straight off the bat…this song, “Machine Gun Bacon” is 100% the best thing that senator Ted Cruz has ever been a part of.  I’m sure when it comes right down to it…he’s got no clue that he IS a part of this song – but that’s where you’ll recognize the sample coming from.  The infamous clip where he’s shooting his way to a hearty breakfast by wrapping a slice of bacon around the muzzle of a machine-gun at a firing range was probably also the best decision we’ve witnessed coming from the brainless idiot from Texas.  Styop Quoons manages to achieve the impossible…something good ol’ Ted couldn’t even manage in the original video-clip – they’ve managed to make him sound cool, if only for a moment.  Gotta say…it’s not the beer talking – I’m only about a third of the way into this can despite spinning this entire EP several times…so I know it’s not me (yet); the facts speak musically for themselves here on this opening tune – it’s just that damn delicious.  With a serious electro-groove that rumbles and roars with catchiness surrounding the vocal samples of the greasy senator – “Machine Gun Bacon” instantaneously gets extra-crispy and stunningly rad to listen to.

As you all know…I like to dig a little bit deeper with the music I listen to…so when I see a title like “The Ritual Of C.H.U.D., Part II” and notice that Styop Quoons have again managed to turn a vocal-sample into the driving-force of the melody that fuels the song – I figured this was one of those times I should look something up.  I seem to remember passing a movie called C.H.U.D. all the time back in the day when I used to manage one of those stores from the ancient civilization…good lord, I can barely remember what the heck they were called now myself…hmmm…  Ahh yes, now I remember…it was a video-store…one of those state of the art places where you could rent a plastic rectangle that contained a film to watch.  Cannibalistic Humanoid Underground Dweller I believe is the definition we’re going with here…and a ‘big-meaty’ one at that.  Honestly…regardless of where these vocal-samples are coming from – I’m loving that Styop Quoons seems to be solid enough in the performance and execution of these tracks to make these samples the star of the show, and that they never seem to be less entertaining than when they first begin.  You’d assume that the repetitive nature of the vocal-samples included would potentially lead to a track that feels a lot less dynamic than the way these actually end up coming out…quite honestly, this is a damn impressive electro-effort overall.  Styop Quoons has managed to make these samples into their instruments – and the courageous way they’re being used as the main hooks & rhythms is actually something to be admired.  Surrounded by glitch-filled electro bouncing through the “The Ritual Of C.H.U.D., Part II” as well as large, looming bass-swells and truly clever transitions in the sound of the course of its playtime – this second cut is almost as addictive as the title-track itself was.  The samples themselves sound like they might have come stripped out of a South Park episode…but that might not be the case…that might just be the tasty way that Styop Quoons has them mixed in here – wherever they’ve come from, it’s another genius moment of composition from this smart electro project.

Huge dynamics pound through the final cut on the Machine Gun Bacon EP, as “DAM_SON” explodes with electro-filled mayhem and madness.  Using children’s vocals and questioning-nature to the benefit of the music, Styop Quoons continues to find innovative ways to create enormously entertaining compositions throughout this EP right up to its very final moments.  Great textures and tones on “DAM_SON,” and another extraordinary adventure in bringing the vocal-samples into all-new terrain by making instruments out of’em – there’s a lot of sharp editing processes pulled off with precision & insightful effort by Styop Quoons that make the music really sound new and truly unique from other artists out there in the electro-circuit…and I got love for that.

With clever switches in sound and transitions, “DAM_SON” ends the new EP somehow in an even more experimental way than when it first began…but I think that Styop Quoons has laid it out in such a way that your faceholes should be able to readily accept what comes at ya.  The Machine Gun Bacon EP was a bizarre but exceptional experience overall…one I certainly enjoyed here in the late night hours where music like this thrives on my playlist.  Just made a little more sense listening to this one at this time of night, all throughout the night…cause now those birdies are starting to wake up…and I really feel like some breakfast – probably bacon…just haven’t quite decided if I want to just fry it up like normal now after all the fun I’ve had staying up late and machine-gunning it with Styop Quoons.