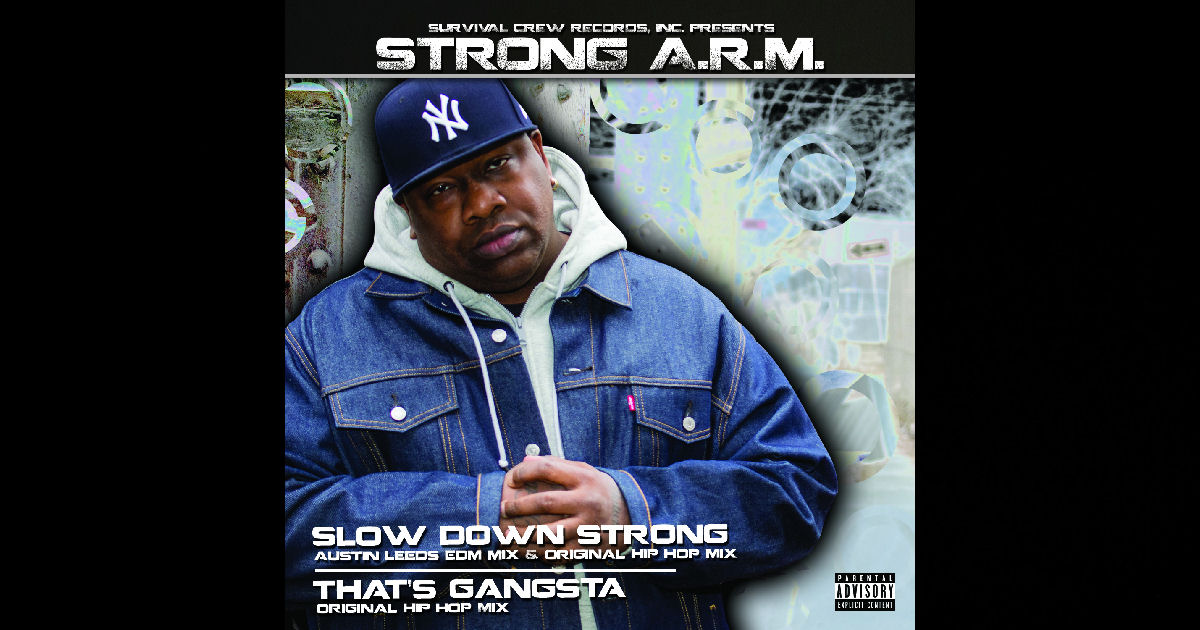 What is UP homies!?!  I got the Strong A.R.M. of the lyrical-law for ya in review here today – don’t get caught sleepin’ on this emcee y’all, he’s bringin’ it to 2019 with these hard-hitting new singles of his.  Strong A.R.M. is servin’ ya up in a couple different ways as well – when you find “Slow Down Strong” and “That’s Gangsta” online, you’ll discover instrumentals of both cuts, six tracks in total.  You’ll also see he’s got the skills of Austin Leeds enlisted to give “Slow Down Strong” the ‘EDM Mix’ treatment as well – and you bet, you’ll even get the instrumental version of that when you check this out via the ol’ internet.  Strong A.R.M.’s clearly got all the angles covered when it comes to promotion, collaboration, and gettin’ his music out there in multiple different ways – that’s smart business yo!  Mad respect for this approach.

Now hang on tight, cause you ain’t ready for the heat this summer – and Strong A.R.M.’s about to make it even hotter.  “Pucker-up, both lips, kiss your ass goodbye,” as the man will tell ya…you been warned – he’s the “true definition of a real emcee,” and he’s clearly gunnin’ for the top of your playlists this year.

Starting off the lineup of cuts with the “Slow Down Strong (Austin Leeds EDM Mix),” this split-single is off & running with epic sound & a full-speed flow courtesy of the main man on the m-i-c.  Ain’t no doubt about the intensity you’ll find in both the music and the vocals of this version of Strong A.R.M.’s new cut – Austin Leeds puts a wildly different spin on the structure & overall sound of “Slow Down Strong” with his EDM treatment – and just like you’ll find in the original, this emcee slides through the bars like a hot knife through butter.  Deadly sound at work here – Leeds cuts into this track with precision and makes the most of this version by adding massive doses of drama to the vibe, heightening that signature intensity you’ll find in Strong A.R.M.’s bars & tone of voice even more with the eerie piano melody supporting him and the synths adding in a haunting hugeness to the whole sound.  Complete with electro-instrumental breakdowns that flex the innovation that Leeds brings to the “Slow Down Strong (Austin Leeds EDM Mix) – this cut becomes a true collaborative effort that certainly hits the mark, 100%.  And if there’s one conclusion you can definitely draw to…it’s that nothing could ever really “Slow Down Strong” – that’s just not how this emcee rolls yo…speed, precision, and powerful words are what this guy is all about…when you hear him rap on this first single, you’ll hear that he’s holding nothing back.

The “Slow Down Strong (Original Hip Hop Mix)” proves that, while the EDM version from Austin Leeds might have amped-up the antics in the music in its own way, when it comes to the quality, flow, and speed from Strong A.R.M. – that was fully intact all along & never manipulated to be any more impressive than it already IS, because homies, let me tell ya, that’s all it needs to BE yo!  If you were to speed up Strong A.R.M. any more than the speed he’s already rhyming at, you wouldn’t even HEAR him – you feel me?  It’s here where you appreciate the message the most – “Slow Down Strong” – because if this superhuman on the m-i-c didn’t keep that in mind, he’d rap out the whole dictionary while the rest of the emcees out there were still on the letter A, know what I’m saying?  He’s that fast & that quick with his rhymes – and even though Strong A.R.M. raps with a real down-low voice like he’s tryin’ to hide all these skills of his from us somehow, the clarity is there and this approach adds to the vibes of menace & mayhem that soar throughout the vibe, atmosphere, and aura of this wicked single he’s got.  For real – props to a seriously single-worthy tune and an award-winning flow goin’ down on “Slow Down Strong (Original Hip Hop Mix)” – he never lets up on the mic & you can still hear every word clear as day.  And that’s because he “gets ill with them words son” – FACTS.  He WANTS you to hear everything he’s got to say & so he should – the precision metering he’s got never deviates, and the effort has completely been put into the design of this rhyme to make it flow flawlessly – Strong A.R.M. delivers on what’s good yo!

“I stomp on the comp, leave’em laid out flat” – I feel like I could quote this guy all day long, there are so many money lines in “That’s Gangsta (Original Hip Hop Mix)” that I’ve definitely lost count.  Not only does he bring it verbally every opportunity he gets, but the entertainment factor & accessibility range probably shifts a few more degrees in his favor with the catchiness you’ll find in the hooks of this cut and how it all moves with such impressive bounce.  I mean…there’s a chance he’s gonna hate me for this comment, but I just call it like I hear it – you’ll definitely hear the classic West Coast vibe from the Dre heydays in a track like this – but correct me if I’m wrong, it’s also got the true hooks of a Will Smith cut too – which I’ll admit, seems like an odd hybrid on paper.  But if you can imagine Smith got past the whole no cursin’ thang and really went after it no-holds-barred – wouldn’t it come out close to something with the insane amount of lively sound, style, flair, and finesse that you find on “That’s Gangsta?”  Facts for me are facts…I know rappers tend to hate on Smith for a variety of reasons and some are valid – some of it also just comes from haters hatin’ on what they’ll never be; but what’s also valid is the fact that Will has always known what works on a commercial scale.  When I hear a cut like this from Strong A.R.M., I have to admit I hear similar potential in that respect…the level of universal appeal in a song like “That’s Gangsta” is seriously high and this emcee’s reach could end up becoming quite extensive online & around the globe with quality combinations of style & sound like this.  Like, look – I get it…bringing up Will Smith in a conversation about anything ‘Gangsta’ is just about the last thing a reviewer should ever do – I understand that homies, I get it, I get it – all I’m saying is, straight-up, you’ll find that the hooks have that same amount of sheer bulletproof strength and undeniable catchiness – we cool?  Sure seems like a hybrid combo that works to me from the sounds of thangs through these speakers I’ve got.  Overall, ain’t no question that Strong A.R.M. has probably rolled harder than Smith from day one and probably always will – I’m definitely not suggesting he tones down his language and goes the full-on commercial route…but from the vibrant sound & way this song pulls you in – it IS an option – a quick radio-edit on a cut like “That’s Gangsta” and he’s on all stations out there this summer, that easy.  I suppose the main point of what I’m sayin’ is, the door’s wide open for an emcee with the potential and skill that Strong A.R.M.’s got – and he can go through it any which way he damn well pleases.  Chances are, he’s gonna keep on keepin’ it real for ya – because that’s how the man is built, unfiltered & raw like that – and I can’t say I’d blame him whatsoever for going that route – that’s what always connects most.

The instrumentals will confirm that the beats he’s workin’ with give him all the dynamics in the beat & sound to spring off of with confidence when he brings it to the mic on the versions with vocals – and really, you can’t lose no matter which cut you select, this is just wall-to-wall solid music and straight-up memorable material.  Strong A.R.M. gives you an excellent dose of a couple different key styles in his sound & proves he’s got that good-good for your speakers this summer in a variety of stellar ways.