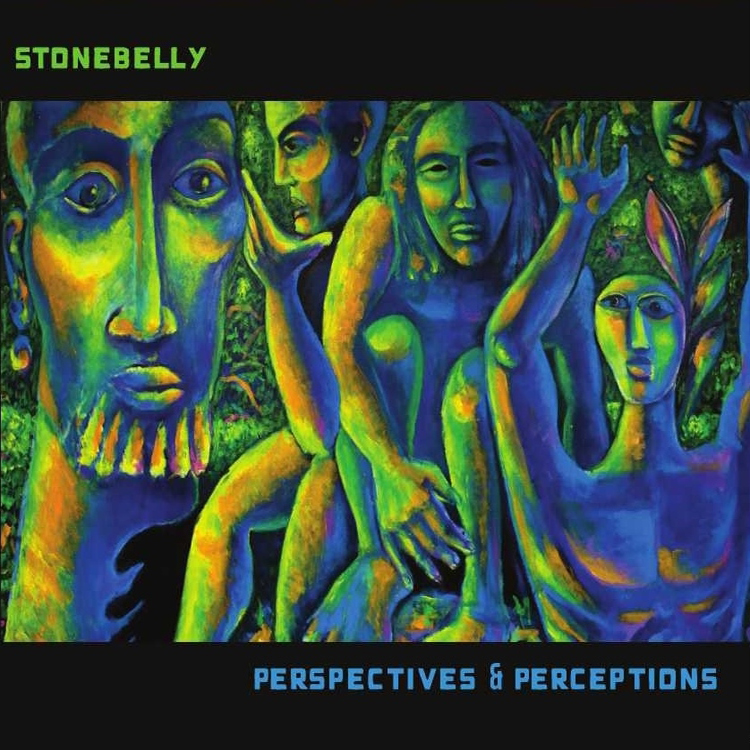 Looks like we’re in some exotic flavour in the music this morning!

Stonebelly is an interesting musical entity; blending all kinds of styles on the fringe of rock, this exciting band has put together a serious display of tight-skills here on Perspectives & Perceptions. Opening with a track to get this whole thing moving quickly, “Rising,” starts the album out in highlight mode. Not only does it incorporate a somewhat Spanish-style to the music, but the drums start standing out quickly as a major asset to Stonebelly…former drummer Kevin Korus puts together some really perfect rolls & fills back there on this track. All together as a band…this song sounds like both a celebration and a warm invitation from Stonebelly to all of us to join in the party.

Dipping into a more psych-60’s/70’s vibe for the second song “Arrow,” might sound a little more ‘straight-ahead’ than the opening track but I can assure you this is equally tough if not more so for a band to pull off. Excellent stop/start guitars from Mike Hollon here, and a vocal standout for him as well; and of course, there’s our man Kevin kickin’ it harder than before as he rips this beat out and straight into the glorious tom-based opening that begins “Right Back Where We Start.”

Think of Cake…but like, you know…if they actually had a pulse and maybe a Red Bull or two…

Tim Aukerman & Brian Morrow bring in the brass-instruments and steal the show on “Right Back Where We Start” against some truly tough competition. Good thing these guys are a band and that they play nicely together! This excellent track has every player hitting their stride at maximum capacity as they pull up the tempo even further to deliver this quick & juicy song loaded with amazing instrumentation.

Wait…what the HECK is THIS Stonebelly? In another switch of style, these guys pull off an acoustic-rock track nearly in the style of The Boss himself. This track has a real Americana/Country-music edge to it, led perfectly by some fantastic bass by Scott Dworak. Is it just my speakers or do my ears deceive me? Turn him UP in the mix fellas! Regardless of my wishes here to get this bass turned up, Stonebelly proves that they can yet conquer another style and aspect of the rock genre with ease.

And OH MAN do they come alive for the next track, “Devil’s Mind!” This track is beautifully rooted in the real psychedelic 60’s sound and Stonebelly delivers this one perfectly with just the right amount of modernization to make it more than a relevant sound for music out there today. This is CURRENT people…and if it’s not, it should be. Listen to the way this track just EXPLODES nearly 2 minutes in – if that’s not one of the more glorious moments you’ll hear on a record, I don’t know what is. As they switch in between heavy & light aspects of the rock genre all in this one song, each player gets a true moment to shine and display their assets. Dworak delivers the bass-line perfectly in the breakdown three & a half minutes in as Mike Hollon really serves up an incredible performance on this one.

And with that…he’s finally reminded me of whom he reminds me of – our very own Colin Craveiro from Man Made Lake on Vancouver Island in BC. I definitely want to see these two play a show together…what a completely wicked pairing that would be… Anyhow…point being, “Devil’s Mind,” = fucking awesome.

Perhaps a slight misstep on “New Revolution,” not too much of one that it becomes a disaster or anything quite so harsh like that; it’s more of a case of importance outweighing the awkwardness and representing what you’re about. What I mean…is that most often, the case is that the songs that mean the most to us can often be the hardest to make, hardest to take criticism on, hardest to ‘reel yourself in’ on…that kind of thing. I think this track, probably more than any other on the album, might display the true ideals and mindset shared between the players in Stonebelly through the lyrics…you can audibly hear more of a message present in this song. That being said…it comes out a little awkwardly…hard decisions always need to be made when it comes to album time; this one would have been on the fence for me as far as inclusion on Perceptions And Perspectives goes.

There’s more standout work from their former bassist Scott on “No Escape,” and from the entire band on “Dark Heart” as they bring the tempo down throughout the beginning of the second half of the album. I think it should be on record that Mike Hollon is a pretty wicked singer and has a great voice to fit this band. And that being said, I might have kicked him back into the studio on “Dark Heart” to give me just one more take. There are a few spots where he’s dipped from his usual confident sound and breaks the energy of his own flow, but for the most part he’s got a great sound this band can certainly depend on.

Stonebelly takes a stroll through a pop-rock avenue on “This Time?” with another convincing performance leaving you believing that this band is pretty much capable of any sound they want to take on; and as they rip into the final cut “The Groove,” they’ll leave you in that state of belief. This final track really DOES have “The Groove!” I absolutely love the guitar in this song…a real highlight in tone and performance, great solos and a real authentic crunch to the sound. The brass section of Stonebelly comes up huge on this track as well…just a wicked trumpet player and a real asset to Stonebelly in separating them from the other sounds out there. Check out the drums and bass kicking ass together about three minutes in…if that doesn’t convince you of the skill in this band than you’re not listening with the right holes in your body.

Yeah! Like I said…highly exotic; there’s a lot going on during the play of this album and I think Stonebelly should be pretty damn happy with the way this whole album comes out. It really gives you a sense of the rhythm and beat that drive and run through this band…they sound unified in their sound and it really translates through the speakers. That’s an authenticity people will dig…and respond to by turning it up.

Find out more about Stonebelly at their official page: http://www.stonebelly.com/