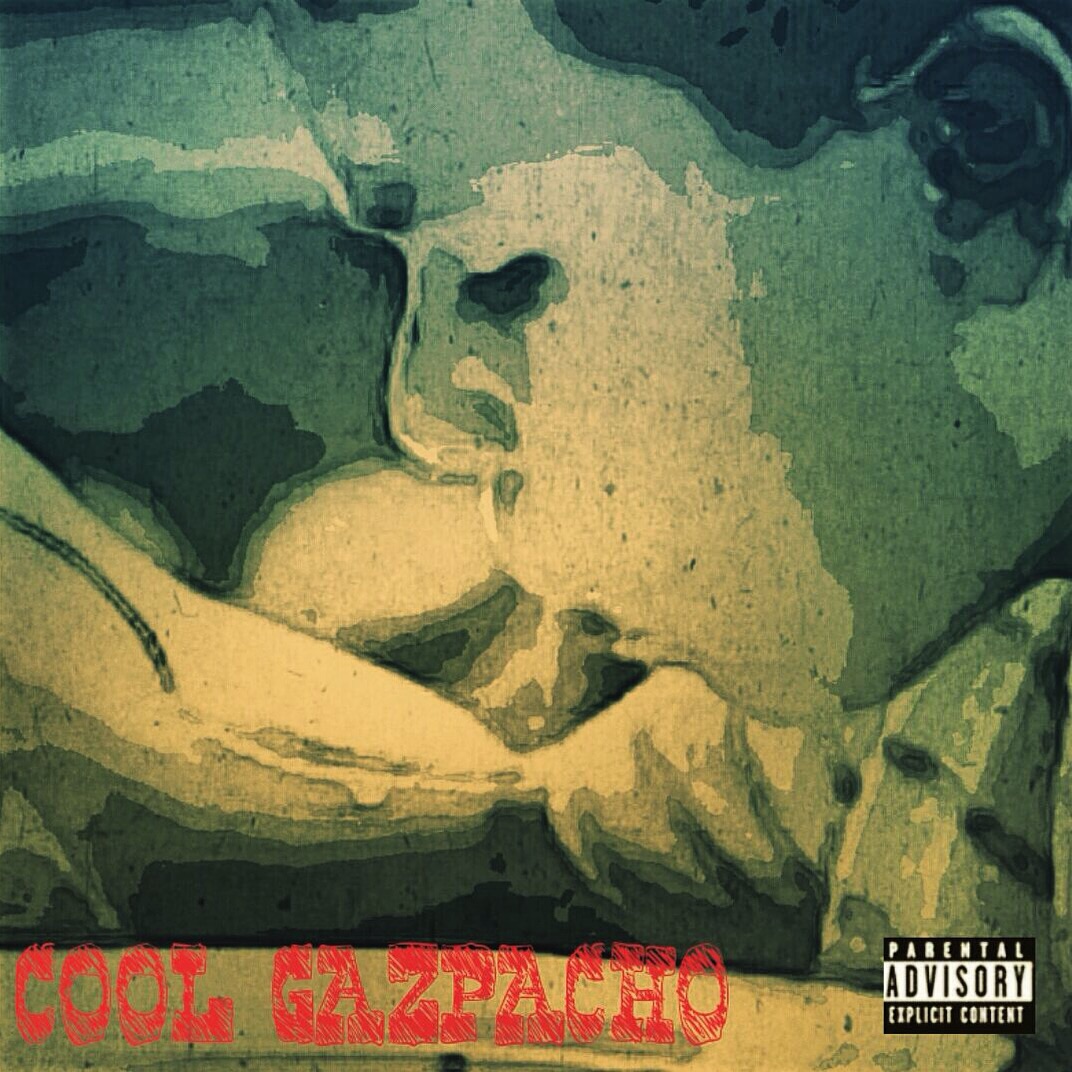 I mean that in the best of ways of course…I just don’t expect this level of skill coming my way many times in one day. Literally some of the best rhyming & hip-hop, complete with production and innovative beats, that I’ve personally heard in some time now. Stone Village is absolutely worthy of your ear-time, these guys have put together an excellent flow to their latest album Cool Gazpacho…a hip/hop & rap combination that’s honestly so complete and so good I’m shocked to find them here on our pages and not the front-cover of XXL or Source even this early into their career.

Love the classic sample horn opening to “Piece Of Cake,” it’s a real nod towards the old-school albums & beats that brought this genre straight to the top. Immediately captivating, the verse follows quickly and demonstrates a monstrously enormous ability to step to the mic with a vengeance to spit verse that takes no prisoners and holds nothing back. Lyrically, Stone Village is right on-point; using everything from impressive insights to straight-up good humor, they keep the mind active and listening…there’s way too much skill to ignore.

Like…listen to the opening verse on “Close 2 You” and you’ll know what I mean. Nearly heading into Jurassic 5 territory on this slowed-down, piano-meets-beat-street jam – Stone Village shine in both the hip-hop aspect and dive deep to claim some R&B cred successfully. But again – are you hearing this? Man! LOVING the courage and the confidence in this crew; listen for the beat to drop out completely and leave them a-cappella just before two-and-a-half minutes in…listen to it and realize we’re lucky to have music to go with these rhymes as they could clearly keep the beat rolling on their own with or without!

The same would apply to “Post ON,” which features one of the best vocal-flows I’ve heard for hook in a long time. Props and shouts out to this crew and the performances they give; without them putting the flavour on these vocals that they do, it might just come out like more words. But with the intensely dynamic performances they put in – it all gets spit into the mic with tones that adapt & match the perfect amount of aggression or melody to suit the song.

Something like “Wake N Bake” is the kind of track a guy like myself from the west-coast of BC can certainly appreciate. They take an interesting beat infused with electro-sounds that sound like they come from old-school arcade games, the rhyme itself comes out closer to something you might hear from someone like Wiz Khalifa; it’s relatable, it sounds like fun, and when you listen to the lyrics they certainly imply those good times. Concerned with whether or not we’re all getting the greens into our diet, they continue on this strain of higher thinking on “Space Purp.”

Wait…did they just make a Pluto Nash reference? Well, I don’t know about all that…I don’t think I’ve ever had the privilege of meeting the two or three people on our planet that actually both saw AND enjoyed that movie…

I can forgive a bizarre and offhand reference to a movie even Eddie Murphy wishes he never made. I mean…I can’t blow-up their spot too much here…as “Space Purp” plays on, there’s no question about it at all, we’ve certainly got a lot in common. They’ve done a great job of taking the music to the lyrics on this one, and vice versa. You’ve got a space-like atmosphere tripping along in the background that compliments the title and you get words that absolutely reflect some of the best lyrics on the finest greens you can find right now. Seriously excellent track. Even without the weed-references I still would have loved this track for the unique beat and flawless delivery in the verse.

Stone Village continues to impress. The low-end heavy “Cadillacs And Gold Grillz” puts out a menacing vibe, excellent samples and beats. Towards the second-minute…again, if you need to hear what a unique verse & flow can be or sound like…listen to this gifted MC raise up his game and find a flow that swims against the stream in the most clever of ways. They certainly understand how to make the most out of any canvas, beat or set of bars right there in front of them; as they rip up and down the playful up-tempo beat of “Girls On The Rooftop” you’ll realize that Stone Village haven’t bored you once throughout the journey along Cool Gazpacho. And let’s just be real here for a second – in between two-minutes and two-minutes-thirty…that’s just simply lyrical brilliance right there…that’s exactly what that is.

There’s a series that runs throughout the album as well, “Mouthing Off” parts 1, 2 and well…3 I suppose. It’s kind of like Led Zeppelin IV…it’s not named, just implied through sequence. They’re all impressive…I’m not sure 100% but instincts would certainly point to these particular cuts possibly being free-styled completely. Whether it is or is not the case – these guys absolutely slay verse after verse after verse in one strong lyrical display after another on these “Mouthing Off” tracks and all throughout Cool Gazpacho.

What I really dig is the combination of what must be a self-imposed pressure to be truly innovative and the courage of Stone Village as they head straight into the studio to bring it straight to the mic. “Trenches” is about the most dangerous and menacing sound they’ve put onto the record…but the flow is honestly something that should just make your jaws-drop.

I cannot express the amount of times I’ve loaded up a new rap or hip-hop album and heard an MC quickly fall back into a style of rhyming made old over twenty years ago and attempting to pass off something stale on the mic overtop of a new club beat. After listening to Stone Village…I’m gonna be a lot harder on those guys I think. I want what Stone Village is doing here to happen on every damn record I hear from rap-genres; they’ve clearly set out to do something different with their rhymes – but more importantly, they’re pulling it off 100%.

You’d be crazy to not hear the J5 influence on these guys though, I really do believe that’s gotta be a crew that Stone Village is certain to be inspired by. Listening to “Smoking In Mis Amerika” you can’t help but make the comparison through skills and tones as they hand off the mic from MC to MC without any drop in quality or commitment. Much like J5 – there’s no weak link here; Stone Village is as strong as it gets in hip-hop right now…to think that they’ll continue to get even better as they soldier on…well that’s what makes me believe I’m certainly listening to some future superstars right now.

I love the title-track. Unorthodox flow! DAMN – why didn’t I think of that? That’s the perfect way to describe what Stone Village comes at us with, and they highlight that right at the beginning of this hard-hitting beat in “Cool Gazpacho.” Again, it’s the performance that makes the key difference. Just after two minutes in, listen to this MC bring his game up and right into the microphone…honestly, the level of skill and commitment to their craft is flat-out fucking inspiring.

If I struggled with any track on the record, it was most likely “Beaming Mr. Sosa.” I won’t lie to ya – I feel excluded here haha…I feel like I’m missing a current social reference or slang…feeling like I should Google this one… Not much I can find…I can find an artist named Mr. Sosa…but I’m not thinking that’s it here. It’s a low-end driven beat similar to the mean tones you found on “Cadillacs And Gold Grillz” earlier on, slowed down in tempo and with a major atmospheric element in production that makes the track sound five miles wide. The performances are great, so is the beat – literally my only issue is that I feel in the dark as to what the heck this particular cut is all about. That’s cool though…not everything needs to be completely straight-ahead right?

As they close out through the implied third part to “Mouthing Off,” Stone Village jumps into the final track “The Message.” Bringing the beat back to hip-hop roots, this one puts the vocals just a little further up in the mix to send out these final knowledge-bombs on Cool Gazpacho. With an excellent sample at the end of the track to highlight “The Message,” they’ve put a defined ending to this record full of memorable beats & skilful rhymes.

To say that Stone Village is on my radar would be completely misleading. This crew is so damn good there’s easily more room on my playlist to house their music permanently and keep them in my mind, ears and stereo on a daily basis.