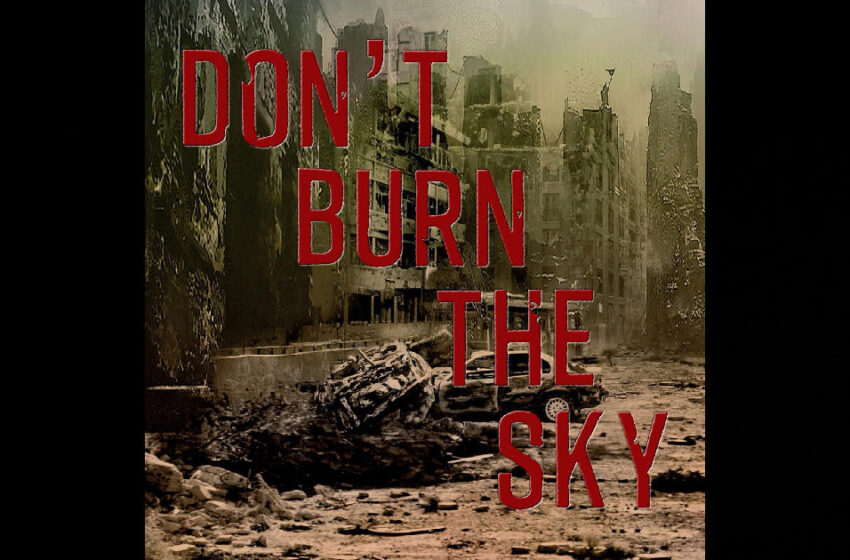 Being ‘in the moment’ can lead to varied results when it comes right down to it…sometimes you get the occasional setback while attempting to move forward, but make no mistake, putting your head down & simply letting the music flow can lead to extraordinary breakthroughs that couldn’t be achieved otherwise too.  More often than not in fact, writing from the heart or what’s currently on your mind is a blueprint towards the creative freedom you’re seeking out as artists, and a damn good listen for us as well in the process.  Steven, much like a great many of us right now, has had the Ukraine on his mind – hence the “Angry.  Scared.  Defiant.” quote that I’ve pulled from his pages regarding his new single “Don’t Burn The Sky” coming out tomorrow…that’s the way he’s feeling, and I’m sure you feel the same.

I kept circling back to this quote as I listened…these three words really summed everything I could say up perfectly.  If love, art, and music are the real weapons we need to combat war, then being angry, being scared, and being defiant becomes the high caliber emotional ammunition we load into them.  I’ve experienced many tunes from Steven Faulkner over the years now…I’m not stranger to the man firing up the feelings and turning up the amplifiers ‘til they’re hot enough to cook on – “False Information Perverts” always comes to mind as a perfect example of scorching insightful fury in the finest of forms.  “Don’t Burn The Sky” has a bit more of a synthetically nuclear vibe to it than the gripping rip through the angst-ridden ride through “False Information Perverts” did…but we’re still talking about pretty close cousins when it comes to the atomic emotions that stoke the fire in these kind of wild Faulkner tunes.  When the man’s got something to say, he’s gonna make sure you hear it, and he’s proven that strongly on both ends of the spectrum…he’s got acoustic-based jams like “Call Home” that equally hit the mark and resonate when it comes to the sheer amount of focus in his songwriting and unleashing pure unfiltered emotions.

Here on “Don’t Burn The Sky,” Faulkner’s raising an audible middle finger straight to the face of Putin’s thuggery, cold hearted chaos, and complete lack of morality.  He’s workin’ with the sound of a one-man war machine on this single, putting in a punishingly addictive & slick cool into the vibe…all-in-all, it’s a track that’s every bit as insightful, direct, and important, as it is entertaining.  It’s not about attaching himself to a topic that’s simply at the top of the news cycle – Steven’s well above all that bullshit – this is real…this is the kind of art that comes to the surface at times where the world truly needs it the most.  I can only hope there’s a seriously kickass boombox over there on the frontlines in the Ukraine that can blare “Don’t Burn The Sky” loud & proud as their anthem of resilience, resistance, and audible defiance.  “In a nuclear war everybody dies – no one wins, don’t burn the sky” radiates real truth to the nth degree.

According to the notes I’ve got scattered across the desk in my dimly lit hovel here in the bowels of the studio, Steven has taken on every role involved in making his new single this time around.  It can be TOUGH switching producers & whatnot after you find yourself in a real comfortable creative groove, which is definitely where Faulkner found himself all throughout last year in a series of singles that revealed much of his best in 2021.  I am not at all opposed to what I’m hearing on a technical level on “Don’t Burn The Sky” – for the most part, he’s got an absolutely vicious stomping & storming sound that’s as epic as it should be for a moment like this, and delivers a massively addictive dose of supreme energy that’s designed to shake the walls as it switches between the loud/quiet dynamic & gnarly riffs.  He’s got a bit of rattle in the mix of this cut when it reaches its maximum intensity…which could be one of two things…and if I was Steven, I’d know which one I’d claim it to be, at least for now.  I’d argue it’s purposeful texture y’all…that’s my theory…that rumble you hear is like the world is collapsing in around you in the franticness of the most powerful moments of “Don’t Burn The Sky” – and I mean…ain’t it?  Ain’t that exactly what’s happening out there right now for far too many people?  A song like this with what Steven’s singing about should come with that feeling like the bombs are going off right behind you to communicate the severity of the situation and the importance of his resilient message…and it does.  So to me, that rumble becomes somewhat symbolic and a suited fit for the concept and idea.  Do I expect everyone out there to share that feeling when they listen?  I’m not saying it’s impossible; and if that was Faulkner’s true intentions with the mix on “Don’t Burn The Sky,” then I certainly salute him.  The flipside of the coin of course being, that if that rattle ain’t intentional, it’s something for the man to consider for the future of his music as he continues to self-produce, assuming the sky doesn’t get burned.  It’s also fairly key to recognize how the people out there perceive what they hear – what seems to be a clever, artistic, and stylistic choice to my ears, is still gonna sound the way it sounds to the average everyday listener out there…and there’s not a whole lot that can be done about that as far as I know.  I’m still gonna be the guy to tell ya to go all-in like Steven does with your art and communicate your IDEAS as uniquely as you can…if that results in a little strangeness occasionally, I’m 100% cool with it.  In the thick of the groove of “Don’t Burn The Sky,” believe me when I tell ya, I couldn’t really care less if the whole sound shook my speakers straight off the wall and sent them crashing to the ground – it’s almost like that would make the experience as complete as it could possibly be, know what I mean?  A bit of a rattle or rumble ain’t gonna pry me loose from a quality cut like this…in fact I’d argue this approach to the overdriven heights of “Don’t Burn The Sky” communicates the angry, scared, and defiant feelings Steven was looking to express as they needed to be captured, with raw, live-wire energy, an unbreakably resilient spirit, and charged-up sound that demands you pay attention right NOW – or else.

“Don’t Burn The Sky” gets released tomorrow, if it comes – find it here:  https://kycker.ffm.to/dontburn