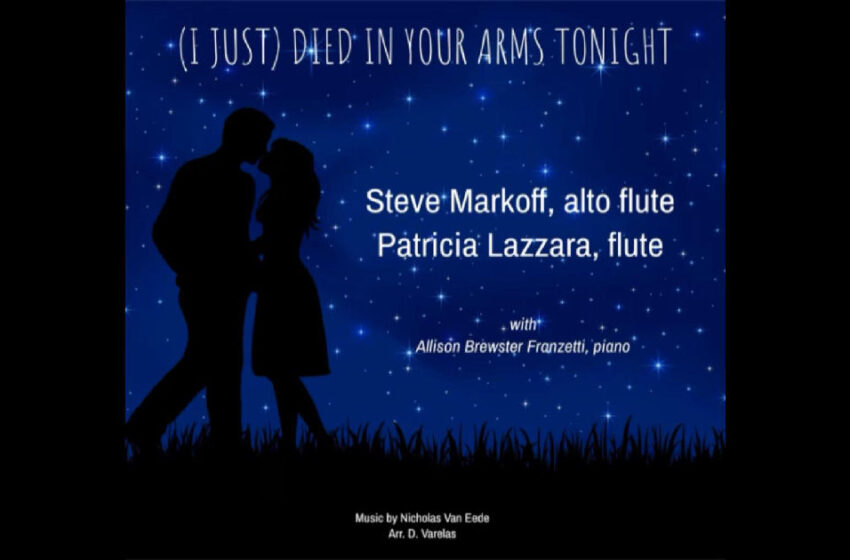 I think this collaboration is just gonna have to accept being a three-piece one day.

At the very least, I know I’ve personally yet to hear Steve & Patricia without Allison…and even the interns at Saturday Night Live eventually become full-fledged cast members one day – so what gives?  What’s it gonna take for our exquisite piano-playin’ Allison to get her name in the marquee here with Steve & Patricia?  Or perhaps she’s the one that’s got it really figured out…like in a movie, where you think you’ve already seen the credits for all the amazing names that will be in it, then comes the ‘with’ & ‘featuring’ & ‘guest-starring’ and all that, and the Oscar-winners start getting revealed…so maybe Franzetti’s more than comfortable with the current billing in this collaboration after all, now that I think about it…

Anyhow!  We’ll have to get to the bottom of this one day…in the meantime, the flautists in question have returned with a brand-new cover for ya – and they’ve once again, taken on quite the tune.  There are many amazing hooks out there in this world of music…and Cutting Crew might very well have found some of the most memorable of all-time when they originally wrote “(I Just) Died In Your Arms Tonight.”  Chances are, I don’t need to explain that to most of ya reading…if you’re over the age of say…hmm…I’ll be generous and say that if you’re over the age of twenty-five and not familiar with this tune you’re living under a rock…it’s basically the definition of a timeless tune – I was actually kind of surprised there weren’t more covers of this song out there when I had myself a peek.  Usually the most well-known cuts are the ones people tend to take on, but there are of course a few that still escape through the cracks of our knowledge & capabilities, wants & desires…and there are also songs like “Stairway To Heaven” and “Nothing’s Gonna Stop Us Now” that should be permanently off-limits because of how perfect they are.  “(I Just) Died In Your Arms Tonight” would be pretty close to that latter category for me…it’s a tough song to imagine what someone else might be able to do with it that could potentially make it better – but the art of making music doesn’t necessarily have to be about that either.  Sometimes we just wanna play a song we like to listen to ourselves…sometimes being different, is as good as being better, you dig?

Steve, Patricia, and Allison’s cover songs have always been remarkably revealing and enjoyable to listen to at the same time.  Revealing in the sense that, depending on the song choice in what they’ve chosen to cover, the results have come out varied along my time in listening – but it’s a really interesting style of music to listen to when you know the originals as well as I have for most of what they’ve selected.  To me, you listen to a song like “(I Just) Died In Your Arms Tonight,” and you truly learn all kinds of things about the core of the melody & structure that you might not have even realized was there before – and that keeps things continually engaging and interesting, at the very least, in my opinion.  I know it’s kind of a nerdy way for me to examine a song, but that’s the reality.  It’s something you can confirm to be true, because you’ll likely still sing along with the main hooks of the original as you listen to this instrumental version…that’s the part where it’s really tough to rival that passion & power of the Cutting Crew for sure…and it’s the part where our brains kind of naturally turn off to revert back to what we know, and seek that out, as opposed to perhaps welcoming something new like a flute-spin on the hooks like you’ll find in music like this.  The other side of the coin however, is that because the melody itself is so faithful to the original song, it’d be tough to argue that this doesn’t go down smoothly, because it genuinely does – I think it can make us long for the vocals we love and the emotion that comes with the words of this song in being reminded through the hooks of this instrumental, but in a weird way, that’s still welcome…we still wanna hear what we’re hearing, you following me?  Sometimes the more you can separate yourself from the original song, or simply having less experience with it as a listener plays to our advantage as well – it’s only through comparisons that we’d ever end up wanting this or that out of any given song, album, artist, or band…sometimes it’s just best to let the music play.

So…did I enjoy this?  I think what I’m trying to say is YES…of course I did…in fact, I think Patricia, Steve, and Allison are so reliable as a three-piece that I’d never go into listening to any of their music expecting to be disappointed…that’d be foolish of me.  They’ve got a track record of success for a reason – they’re all great players and they get right to the heart of so much of what really makes “(I Just) Died In Your Arms Tonight)” work beyond what we typically tend to realize.  As in…YES…I enjoyed this cover – how could I not?  Reliable song, reliable players…that’s usually gonna stack up to a win like it does here – but what I am saying, definitively, is that I didn’t end up enjoying this cover for the reasons I naturally would have thought that I would have – make sense?  Let’s be real here – the hooks of the Cutting Crew’s original are absolutely spectacular…and I suppose, going into this experience, I had assumed that this would be the part of their cover that would end up speaking to me the strongest – but it was actually everything else and the way they made the rest of this song come alive that I really found impressive.  As far as the hooks go…don’t get me wrong, I’ve got no complaints there…they all hold their own with delicate grace, true professionalism, and bold melody when it’s called for as players, and they know how to turn on the extra degree of appeal when it comes time to charm ya with the catchy parts of these covers…which to be honest, isn’t as easy of a task on a flute as some of you might think it would be to begin with.  I felt like this whole version gave me a much higher appreciation for the songwriting and structure of “(I Just) Died In Your Arms Tonight” overall from start to finish…and there’s something special about Steve, Patricia, and Allison’s ability to do that with the music they’ve been making, that’s really unique to experience.  Like I said from the start – sometimes being different is as good as being better – I knew I was always going to like the hooks of this single as long as the melody was intact, but I came out of listening to this cover with a genuine appreciation for the entire song as a whole as a result of the way they’ve played it.  In my world, that’s aces – and it’s something I’m truly thankful for – music like Steve, Patricia, and Allison make together seriously enrich these lives we’re living – it’s not a style that many of us rock with every day from point-A to point-B, and it always makes for a great departure.

Find out more about Steve Markoff & Patricia Lazzara at their official website at:  https://www.lazzarkoff.com