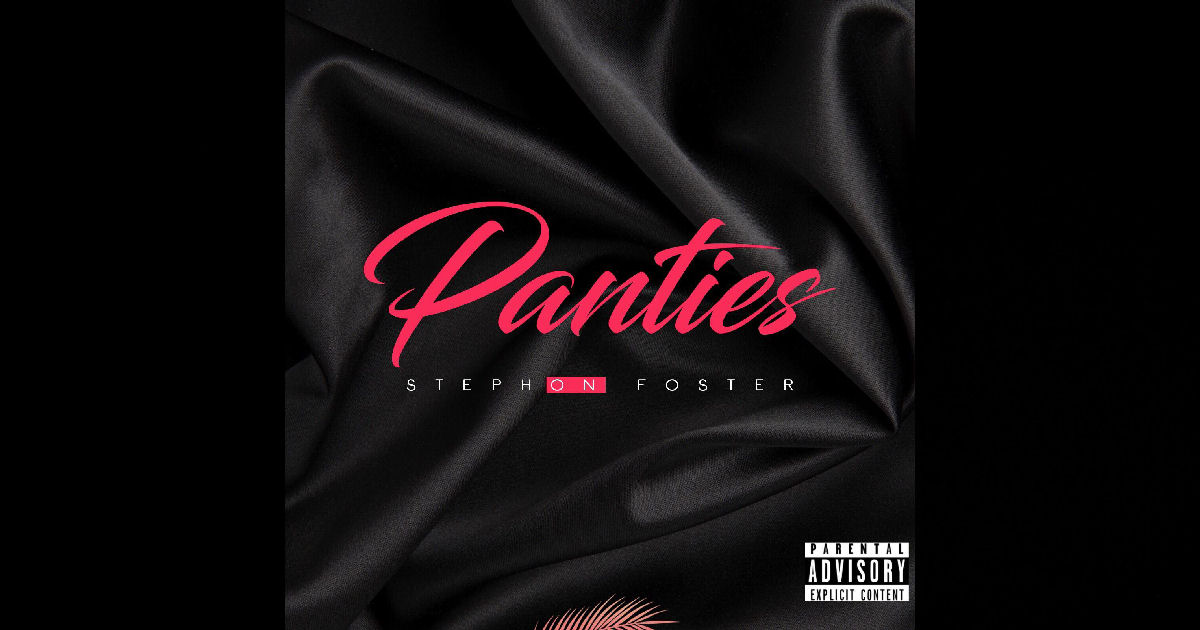 Stephon!  Tell us how you really feel will ya?

I’m playin’ around with her of course…believe me, she’s not the kind of artist to hold anything back.  You’ll know beyond the shadow of a doubt what she’s singing about on her new single “Panties” – this is some sexy stuff people…ain’t no two-ways about it!  As this singer/songwriter heads towards the official release of her upcoming record Black Kanary in September – she’s released “Panties” as the third single, following her debut cut “NiteTime” and latest cut “Overdrive” – and with each subsequent track I’ve heard from Stephon Foster, things seem to continue to get steamier & sexier for sure – but the quality of her performances & the dynamics of the music are noticeably improving too.  In fact…there’s really only one thing I can think of that could potentially work against her on this new single…we’ll get to that in a moment or two…but even when I do, it’s still only half-fact and half me givin’ her a hard time just to tease her a bit.  C’mon now…you can hear from the lyrics on “Panties” she can take a hard time.

And if she’s allowed to use innuendo, then hey, so am I.

For real though – I do think she’s onto something and I think that there are a lot of ladies out there that are going to seriously admire just how bold she is with her imagery & words, her confidence & candor.  There are probably a million or more artists out there that’ll beat around the bush – not Stephon.  If you weren’t able to fully pickup on the vibe she’s puttin’ out there on “NiteTime” or “Overdrive” – well…let’s just say you can’t possibly miss the meanings and messages behind her words on this third single.  She spells it all out as directly as anyone ever could on “Panties” – and ultimately, I think we’ve all gotta recognize that for exactly what it is – this fine lady knows exactly what she wants out of her life AND in her music.

I say that second part for a reason…let me explain…

There’s no mistaking her words and delivery for anything other than passionate about the explicit content & steamy scenarios she’s singing about…it’s clear that a sexy-mentality is a state of mind she’s more than comfortable in and a dominant part of her personality she’s proud to express.  But that’s where the music really comes in…this whole artist thang…the sheer fact that she’s not compromising who she is and confidently going after her own unique perspective and identifiable style of music is something to truly be admired.  I mean, you got your Pendergrass’ out there…maybe you could put Peaches into the mix as well…but really, there’s not that many artists out there that’ll take the sexiness of a song right to the surface like Stephon is doing – and that’s going to count for a ton when it comes to listeners out there.  Because YOU know it and I know it – and Stephon KNOWS it – WE can all relate to a lot of what she’s saying…so much to the point where you almost have to wonder WHY other artists out there would hold back on saying exactly what they mean when it comes to the details of sex, life, & love.  Why all the metaphorical “Baaaaaaaaaaaayyyyyyyybaaaaaaaaaayyyyyyy I compare you to a kiss from a rose on the grey…” you feel me?  Like what dude?  It’s just unnecessary.  I got nothing against Seal, he’s a great singer at the end of the day…but c’mon dude…if he said things like Stephon is sayin’ he’d have “Panties” droppin’ round the world even more than he does now!  Or at least it’d take less time to get there without having to like, quote some seventeenth century Shakespearian love sonnet first, you dig?

So for me…I felt like this was definitely a winner for Stephon and another bold step forward towards Black Kanary in September…boldest so far in fact, without question.  The lyric video that goes with this tune is incredibly well put together – loved that too…but really, the stakes have already been raised quite a bit all-around with what you’ll hear in this single compared to the previous two releases.  I think the music makes brilliant use of the low-end, is edited with a seriously expert hand, and the hypnotic vibe that this whole cut ends up finding is wildly mesmerizing…you can really feel this flow through ya.

Now…just to toss in a lil’ bit of fun here in the review and a bit of wordsmith reality-check…because there’s one thing that could toss a significant wrench into this single and it all comes down to word-selection…but once again, in my opinion, highlights a major strength in Stephon’s approach.  So while I might be giving her a hard time in a second here…I’ll twist this all around by the end to make my point…

…but the main obstacle she’s got, is the title itself and the word being used in the song – “Panties.”  Go ahead and say it out loud if you CAN…and I say that, because there are literally studies out there that show that some people just CAN’T.  Like the word ‘moist’ – there are documented cases of these words specifically making people visually uncomfortable just by saying them aloud or reading them even.  So…while I personally think there are far worse offenders out there than ‘moist’ or “Panties” are as far as words go…it’s still something to consider at the end of the day…there IS a slight chance that it could potentially narrow the audience that she’s looking to hit with this single to some extent.  Maybe.

OR…(this is where I flip the script, buckle-up)…or you can realize that the confidence & sexually liberated attitude and style of Stephon Foster has every right to go out there and reclaim this word!  If you use it with power like she is in the sweet whisper of her vocals on “Panties” – how does it not become something great to listen to instead of cringe-worthy like it has been in the past, you know what I mean?  Part of it I’ll admit, is getting to know Stephon’s music and the angle she’s workin’ – that’s how you’ll know beyond all doubt that she’s likely used this word on purpose…almost a ‘get used to it’ kind of thing – cause she’s droppin “Panties” on Black Kanary just around the corner anyhow yo!  But no…it’s more of a ‘get used to it’ in the sense that she’s continually ready to put forth her sexually expressive self for the world to embrace through her music & signature style…and if they don’t wanna, I’d recommend pulling up those “Panties” and moving right on to the next person that ain’t wastin’ this boss lady’s time!